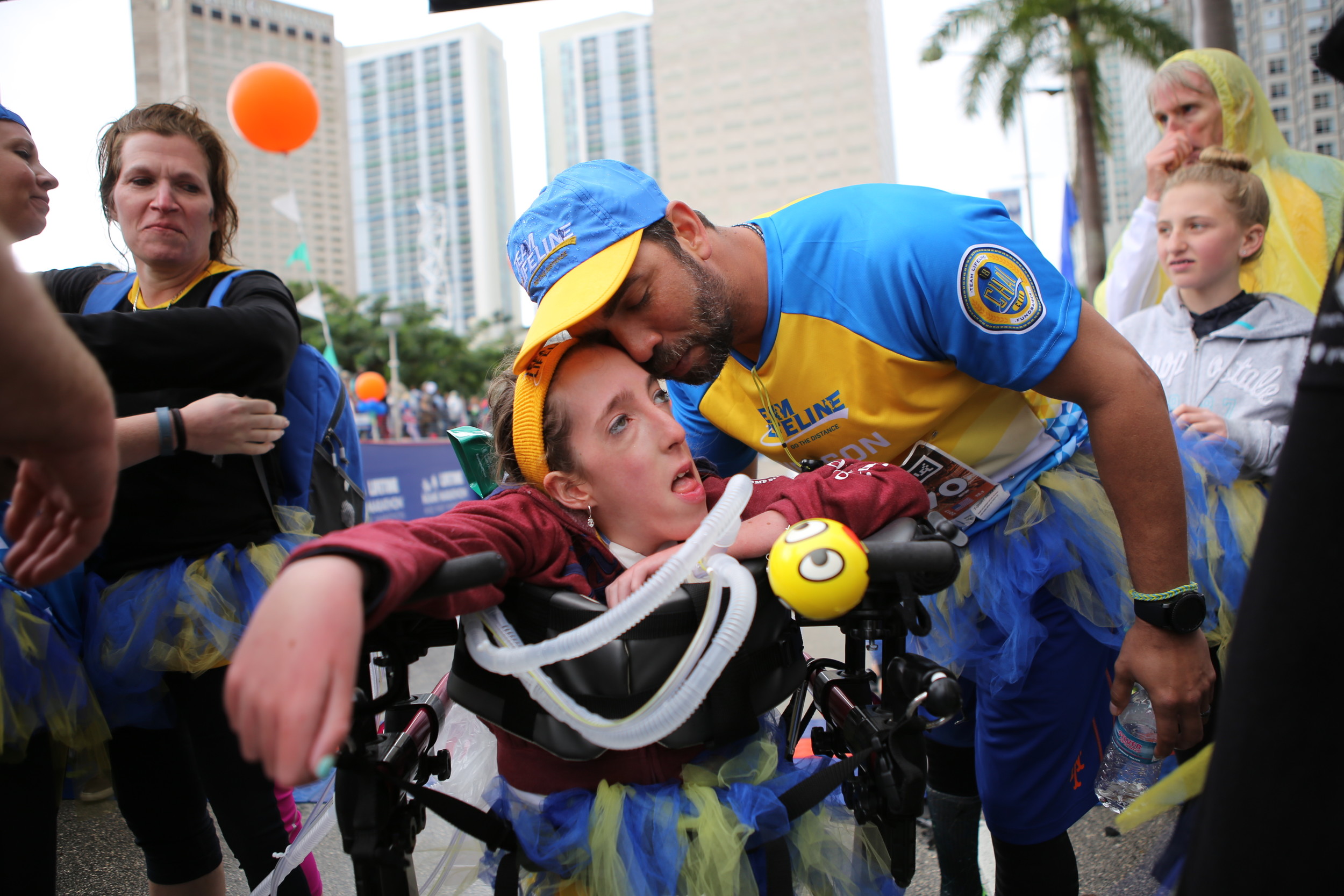 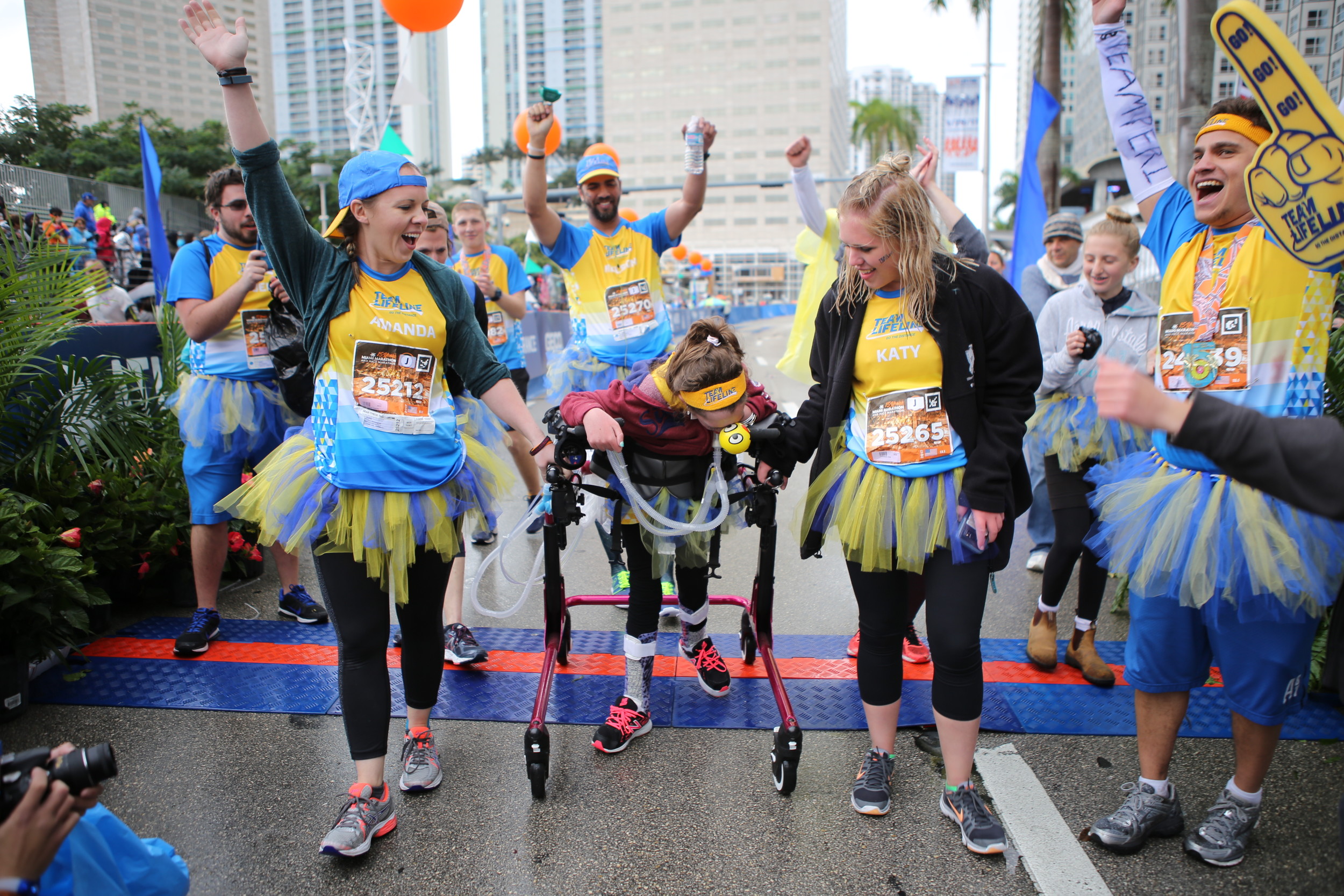 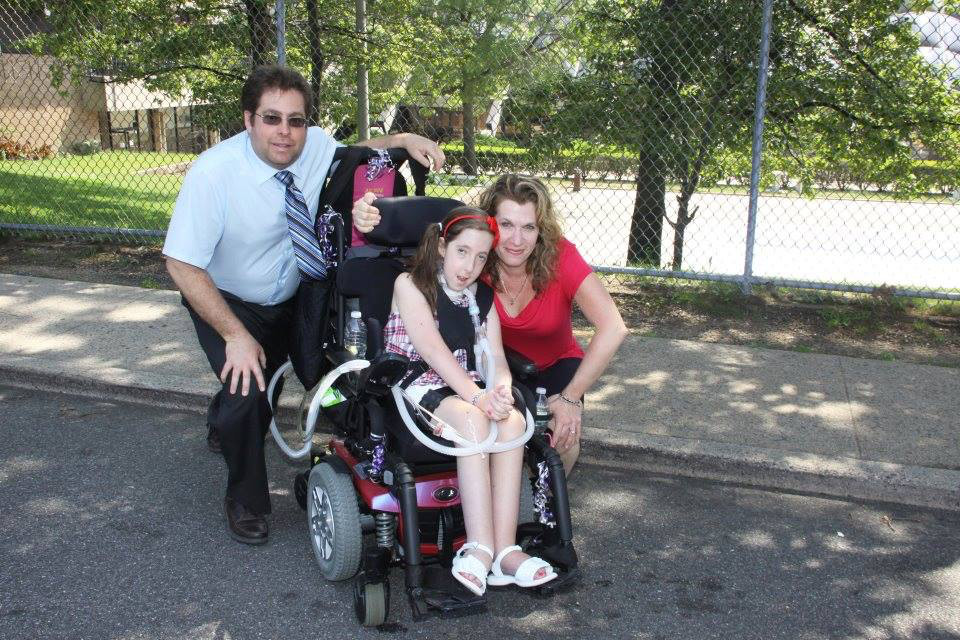 Finkelstein with her mother, Lori, and father, Paul, in an undated photo.
Steve Orlando
Previous Next
By Rossana Weitekamp

It was raining and windy — yet 17-year-old Peri Finkelstein, a West Hempstead resident with muscular dystrophy, traveled to Miami on Jan. 28 with one goal: to walk a mile in the Miami Half Marathon.

Her reason was simple: She wanted to raise money for Chai Lifeline, an organization that has helped her and other seriously ill children live normal, productive lives.

Despite the weather and the fact that Finkelstein is in a wheelchair and on life support, she went the distance — walking the last mile of the marathon with the help of her family, friends and a walker. Finkelstein has participated in the Half Marathon for the past six years, and this was the farthest she had ever walked.

“She did great. It took her about 40 minutes,” said her mother, Lori Finkelstein, who walked in the event with Peri; her husband Paul; and their other children. In fact, Peri had her own squad —Team Peri — which also participated in the annual race with her, including her physical therapist, some friends, and, one of her biggest fans, former New York Mets pitcher Nelson Figueroa, who joined Peri in last month’s marathon.

Figueroa met Finkelstein eight years ago, and has helped raise money on her behalf for Chai Lifeline. “Because of what he did, they accumulated over $281,000,” Lori said. “Nelson donates his time, he makes a lot of phone calls, does a lot of radio and newspaper interviews just to promote this fundraising effort.”

Last year, Finkelstein was the focus of a video called “A Thousand Steps” — which documented her goal to walk 1,000 steps in last year’s Half Marathon. She completed more than 1,400 steps.

Almost immediately after the marathon, she and her mother came home, only to leave again for a two-week trip to Israel with Chai Lifeline. The organization brought 14 severely disabled children, each with one parent, and medical staff. It was the first trip to Israel for the young people, who all have attended Camp Simcha Special, which provides hundreds of ill or disabled children with a summer camp experience.

Finkelstein, a lifelong West Hempstead resident, is an 11th-grader at Henry Viscardi — a special needs school that was founded on Hempstead Gardens Drive in West Hempstead in 1952 and moved to Albertson five years later. The school provides academics and cultural opportuni ties, and teaches personal growth and leadership skills to its students. Finkelstein is a member of the National Honor Society there. “When she graduates, she will go to college, we’re not sure where, possibly Adelphi or Hofstra,” said her mother. “She’s interested in doing marketing or business or maybe becoming a attorney who does disability law or advocacy.”

Before leaving for Israel, Peri offered advice for anyone who feels challenged by a goal: “Always know that you can do the impossible,” she said, “because everything’s possible.”