F.D. tankers are vital in areas without hydrants 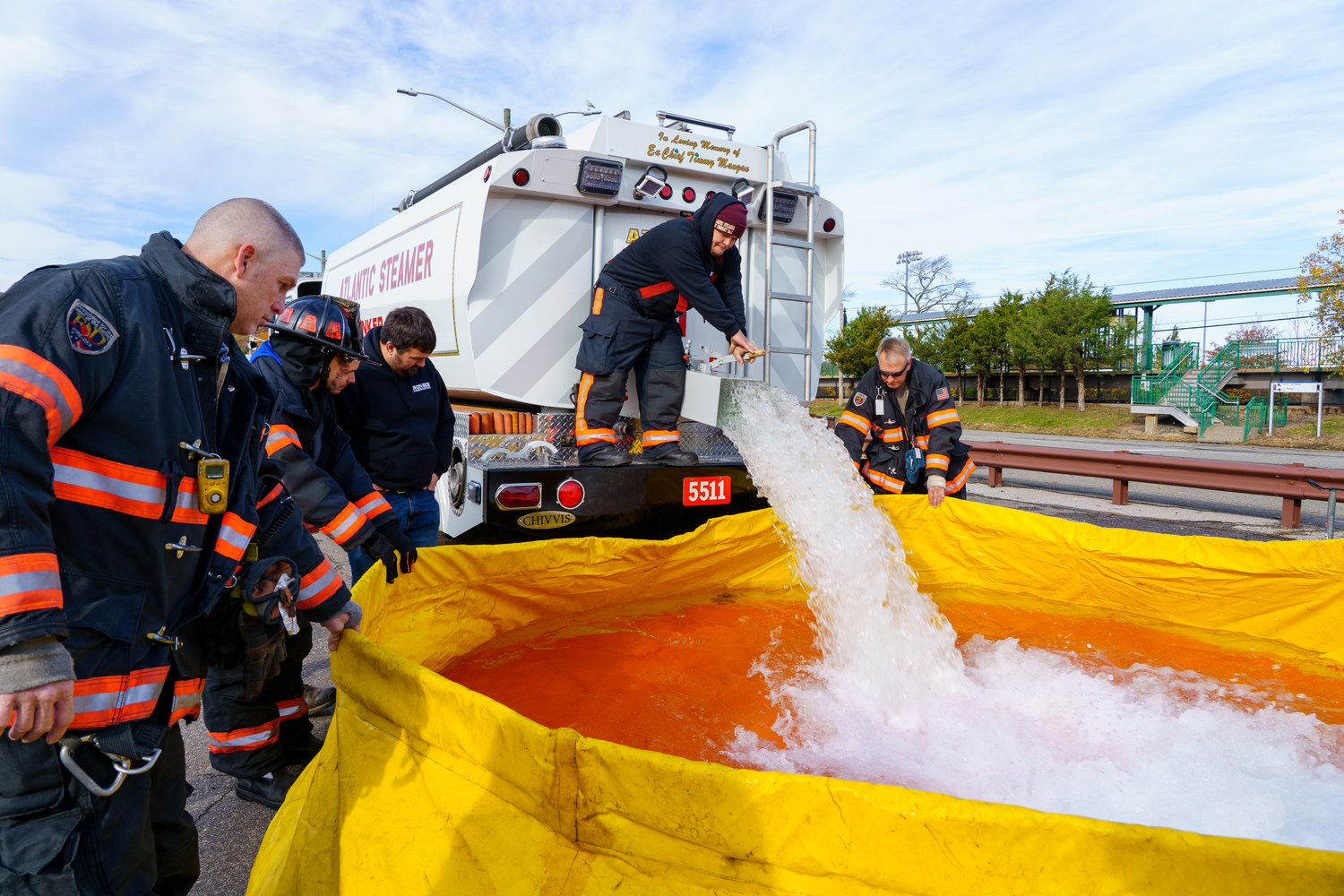 The Atlantic Steamer Fire Company’s tanker truck holds 3,200 gallons of water, which is used when fire hydrants are not available. After it is collected in a pool, the water can be sucked out into a fire engine.
Roni Chastain-Herald 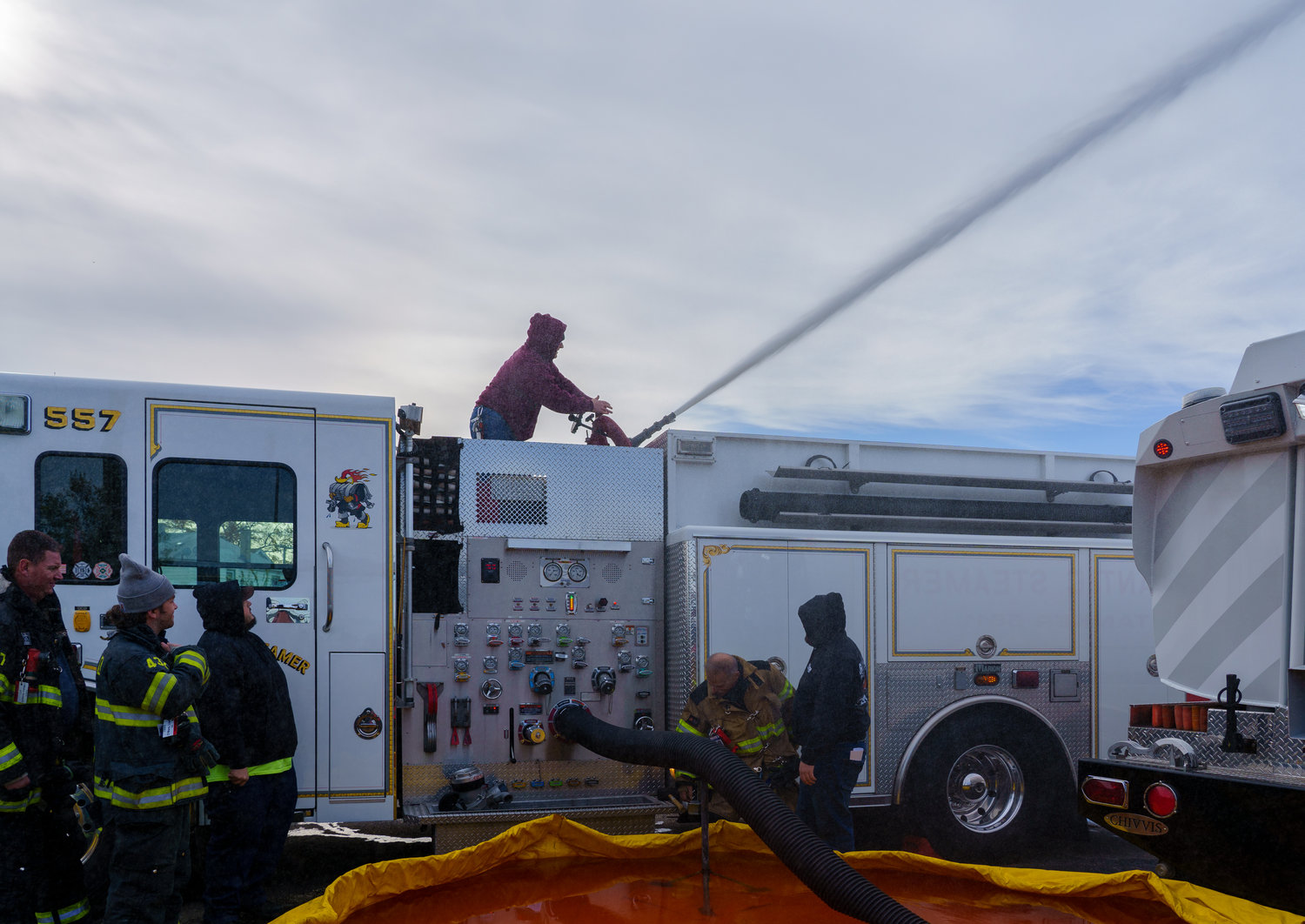 A large black hose on the side of a fire truck, left, is used to suck the water out of the pool and then to put out a fire.
Roni Chastain-Herald 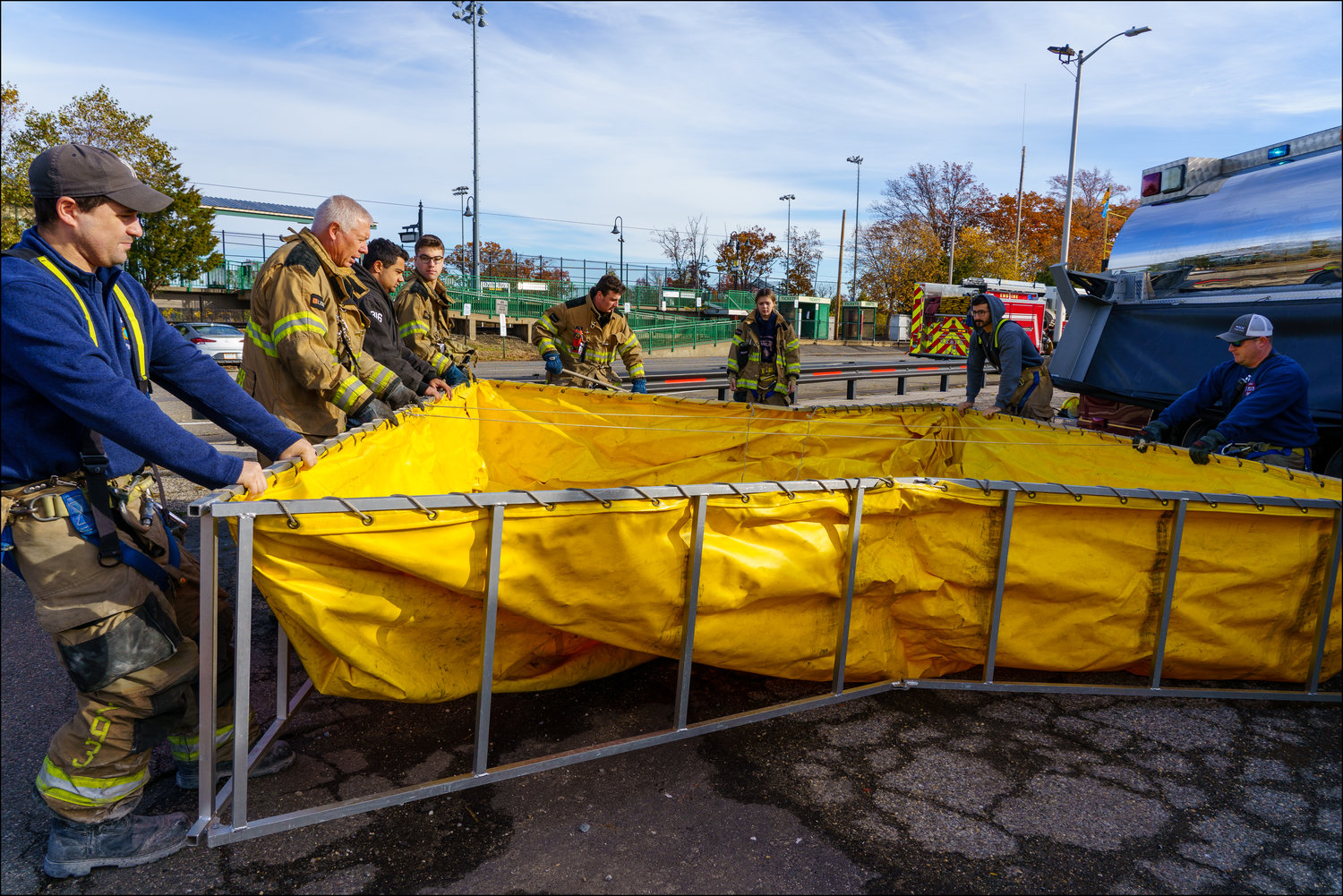 At a fire, a collapsible pool will be opened on level ground by firefighters in preparation for the water that will be dumped into it from a tanker truck.
Roni Chastain-Herald 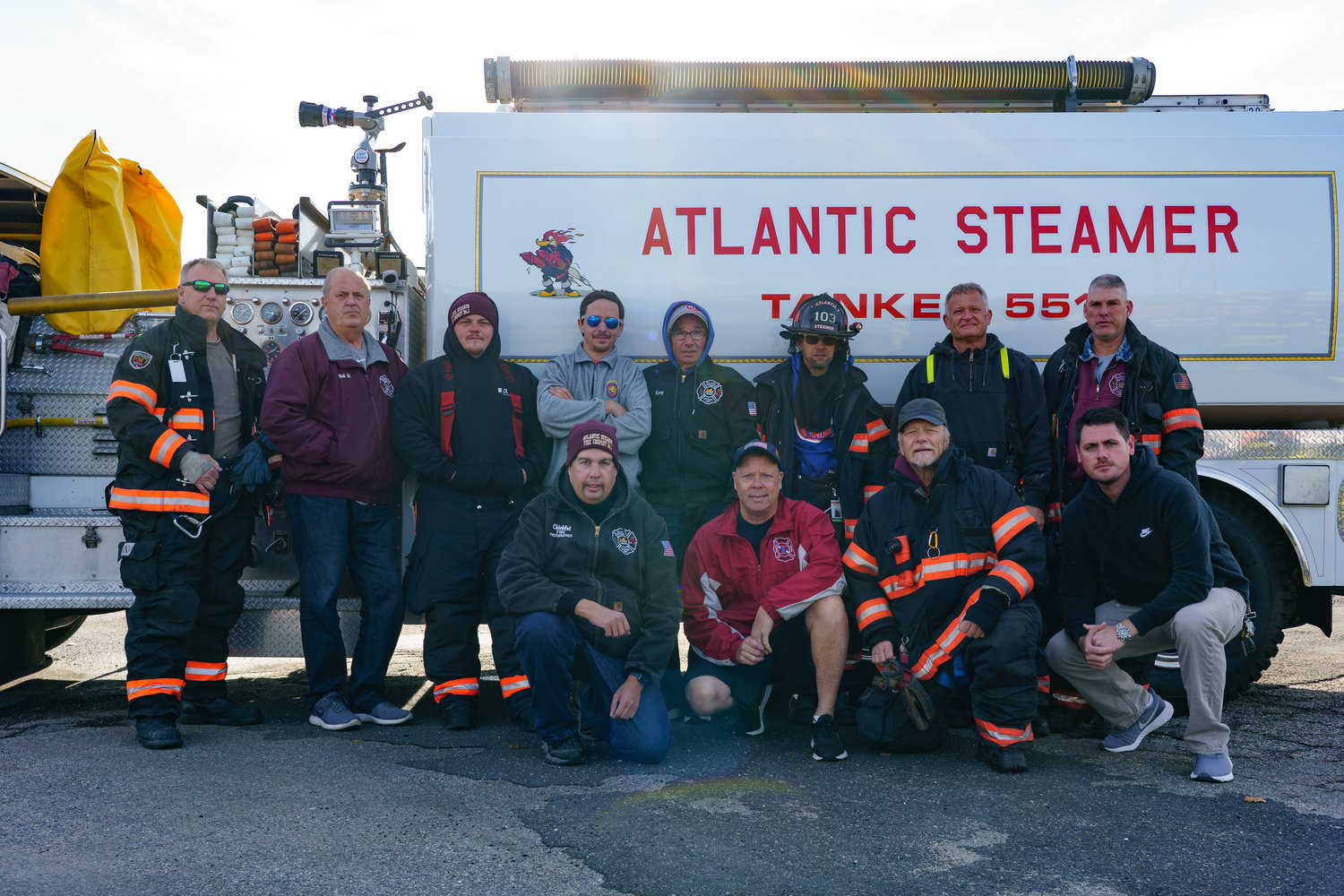 Members of Atlantic Steamer Fire Company, below, attended a tanker drill at Fireman’s Field in Oyster Bay on Nov. 14.
Roni Chastain-Herald
Previous Next
By Laura Lane

People take fire hydrants for granted, said Frank Barbera, the Atlantic Steamer Fire Company’s  second assistant chief. It doesn’t occur to most that there are very few, if any, fire hydrants at golf courses, and none where brush fires occur. Locally, fire hydrants don’t exist on Centre Island.

The members of the Atlantic Steamer company and the Bayville Fire Department are on duty with tanker trucks in instances where fire hydrants aren’t available.

“We go to the [Jones Beach] Air Show, and are on stand-by with our tanker in case there’s a fire or one of the planes comes down,” Barbera explained. “And we take a tanker to brush fires and to Centre Island. We use the tanker for other reasons, too, including when fire hydrants are frozen and at water main breaks.”

But what is a tanker? Designed to carry liquid, a tanker truck is an important vehicle for North Shore firefighters.

Members of Steamer, and the Bayville and Cold Spring Harbor fire departments, gathered at Fireman’s Field in Oyster Bay on Nov. 14 for a two-hour training in tanker operations. Firefighters are not permitted to operate a tanker until they have completed 10 hours of training in driving one, and five in pumping. Firefighters and emergency medical technicians can take part in the training, but not everyone wants to.

Bayville and Steamer are the only two departments in Nassau County that have tankers. They are especially useful in Centre Island, and not only because there aren’t any fire hydrants. It’s difficult for fire trucks to back out of the driveways, which are often 1,000 feet long, to turn around on the narrow streets to get more water. But a tanker can maneuver easily when more water is needed.

This was the first time the Cold Spring Harbor department attended the training, its chief, Stephen Fitts, said. One of its neighborhoods doesn’t have fire hydrants. “Luckily we haven’t had a fire there,” Fritts said. “This is the first year we’re preplanning a plan of action together.”

Bayville and Steamer assist CSH when they are needed.

Steamer’s custom-built tanker carries 3,200 gallons of water. Bayville’s, which also responds when needed,  carries 3,500. It’s rare that both are needed simultaneously in Nassau County, but one will stand by just in case. Upstate and in parts of Pennsylvania, Barbera said, it’s common to use both tankers on a fire call.

What’s involved in a tanker operation

While the fire truck is using water to put out a fire, a large collapsible pool, stored on the tanker, is set up on flat ground, as a sort of portable pond. Water from the tanker is emptied into the pool. Then a large black hose on the side of a fire truck is used to suck the water out of the pool when there’s no water left in the firetruck.

The tanker will then travel to the nearest fire hydrant or a pond to get more water and the process begins again. If two tankers are used, one will be driven to get more water, while the other dumps water into the pool.

Called a “shuttling operation,” this ensures that a fire will not “rebuild.”

“When tanker operations are involved,”  Barbera said, “we need a decent number of members.”

Roughly 50 firefighters attended the training in November. The hope is that they will continue their training so they will become qualified to use a tanker in future.

“All the departments work well together,” Will Flower, a Bayville firefighter, said. “If the fire is at Centre Island, we use saltwater from the Sound or bay. Maps show us where the streets end at the water.”

Last month’s training, Flower added, was a good opportunity to practice using strategies to ensure that a response to a fire that needs the assistance of a tanker is efficient and effective at the fire scene.

Two years ago, there was a brush fire at an unexpected location — the Town of Oyster Bay’s dump in Bethpage -— which Steamer responded to with its tanker.