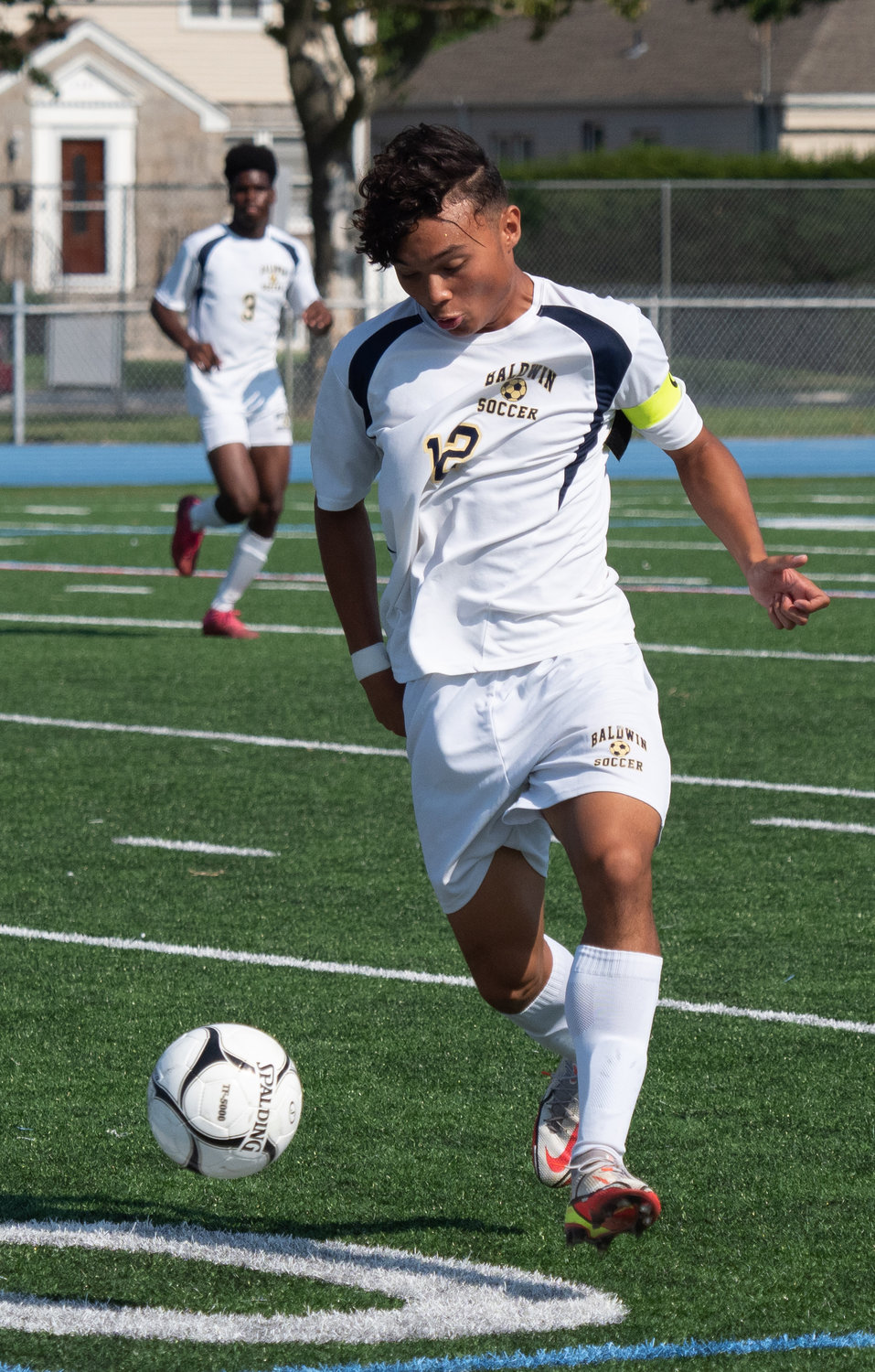 Senior Luis Ascensio is a four-year starter who anchors the defense for Baldwin, which hopes to continue the momentum it built last spring.
Eric Dunetz/Herald
By Garrett D. Uribe

Baldwin boys’ soccer bounced back big from a winless 2019 campaign, finishing 4-3-3 last season as Conference AA3 runner-up.
Tops in the conference on defense (1.6 goals per game) the Bruins scotched a two-year postseason drought, getting edged in the AA quarterfinals by eventual Nassau champion Massapequa – a team Baldwin had dispatched on the road 4-1 two weeks earlier, notching its season high in scoring.
Keen to keep rolling along the tracks laid in spring, Baldwin returns seven starters to a still young but tested squad. With course-correction in hand, coach Chris Soupios said his club is now intent on seeing just how far down the line it can go.
“Last year showed us we have the ability and deserve to be in the playoffs,” said Soupios. “Even though the year before we’d been 0-11, we believed we could compete. The difference now is that we know we’re a playoff team, and our goal, as always, is to win a county championship.”
Integral to any such designs will be talented Bruins siblings Luis and Josue Ascencio Cueva. Luis – a fourth-year starting senior wingback – was named All-Conference leading Baldwin’s defense, while Josue (sophomore) starts a second year in goal after posting close to six saves per game last season. “I see Luis as a college player, a total lockdown defender,” Soupios said. “Josue also has a huge career ahead as a college goalie. He did great, starting as a freshman, and he’s becoming more of a leader in the back, which is what you want from a goalie.”


On offensive Baldwin brings back Honorable Mention All-County striker William Zelaya, a sophomore who will look to collaborate with fellow second-year starter Justin Jean-Louis, an All-Conference midfielder whose season game-high three assists came in the win at Massapequa. “William’s one of the most complete players I’ve ever coached,” said Soupios. “He’s another sure-fire college player who’s going to score goals. Justin’s a guy who opened a lot people’s eyes last year. He can put the ball in any spot you tell him, he can make the kick.”
Third-year starting seniors Anthony Ramos and Ashel Santos are back for Baldwin at midfield and wingback respectively, while juniors Kwame Souffraint (midfielder) and Andres Moreno (center back) move into the starting rotation, along with senior newcomer Shemroy Young (center back). “Anthony has a sixth sense and gets those gritty goals for us,” Soupios said. “Ashell will team with Luis on defense, but also be a big assist guy for us with his passing ability, giving us lots of chances.”
Entering the fray of Nassau AA’s new aggregated configuration, Soupios – whose team dropped its season opener 2-0 against visiting Freeport Sept. 9 – sees Baldwin as nicely primed for the 15-team shootout. “Double-A is one of the most competitive conferences,” Soupios said. “There are no free games. But there’s a natural confidence that happens whenever a team starts to see it can win. We took a big step forward last season, and we’re looking to take another.”