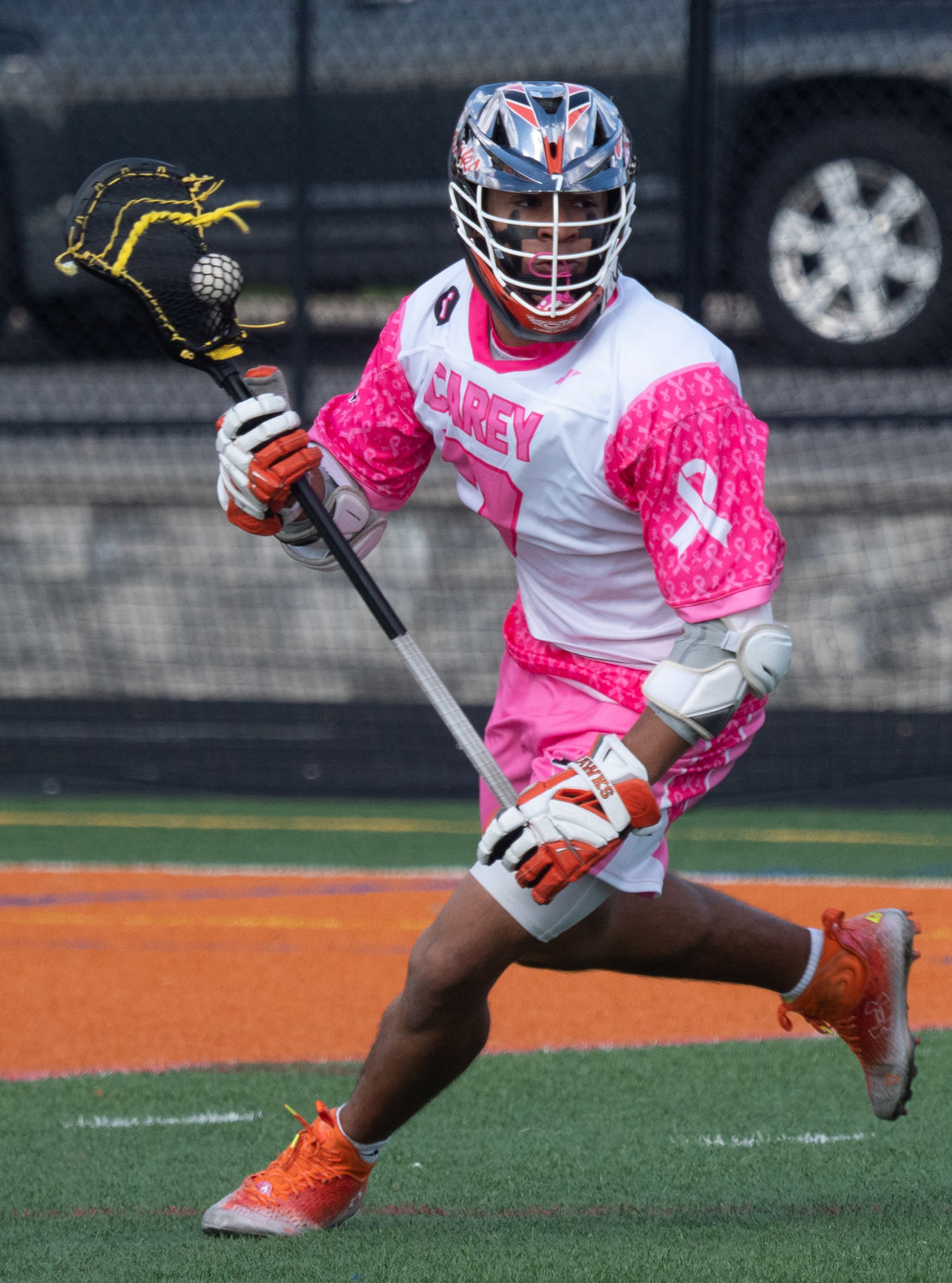 Senior midfielder Kyle Lewis had a hat trick in Carey’s big win over Glen Cove on April 27 and has 24 points through 10 games.
Eric Dunetz/Herald
By Jamie deJong

Carey’s boys’ lacrosse had a dominant performance against Glen Cove, as the Seahawks had everything going for them in their 19-6 victory on April 27.
Carey put up nine goals in the first quarter, and then controlled every element going forward. Coach Tom Aiello was elated with how through and complete this performance was, and thought this victory was symbolic of the gradual progressions his group has made throughout this season.
“We had a good week off practice. We have been getting better each week,” Aiello said. “I thought every facet of the game as far as face-offs, offense and defense all played well together. We finally put a complete game together.”
The 19 goals scored reflect how well the offense was flowing throughout the entirety of the game. Senior midfielder Dean Metzger was dynamic, as the five goals he scored were both a byproduct of finishing on created sets and beating a defender one-on-one. He also had three assists and has scored 18 goals in the past four contests. Seniors Kyle Lewis and David Ras both were major catalysts in the offensive explosion as well, with each of them having three goals and an assist. Lewis now has 24 points on the season and Ras has 10. Freshman Christian Todaro also did a great job initiating offense for others, as he finished with three assists.
Carey also did a phenomenal job controlling time of possession, and a good deal of the credit goes to sophomore Ben Rose and freshman Mike Verederosa. This FOGO duo each won the majority of their faceoff opportunity, and each scored a goal going coast to coast off the faceoff at different junctures off the game.


While the middies and fogos did a great job keeping the majority of the possessions in enemy territory, Carey’s defense stepped up when needed. It might not show up on the stat sheet but senior Alex Almache and freshman Billy Koutsoumbaris each had nice defensive stops, and freshman goalie Rich Metzger had five saves. He now has 44 saves on the season.
Carey has a 3-7 record overall, but does possess a 3-1 record in Conference B. The two other conference victories are a 13-2 routing of Baldwin behind Dean Metzger’s eight points, including five goals, and a 15-8 performance against Herricks that saw Metzger register nine points and Todaro and classmate Christian Korszloski get hat tricks.
It appears as though the Seahawks are hitting their stride and still have ample time to make some noise in the homestretch. Aiello is elated with the recent performances but is cognizant that this stretch run up will be the most strenuous and challenging stretch they’ve faced yet.
“Now we are going into the teeth of the schedule,” Aiello said. “We have Garden City, Calhoun, Long Beach, Macarthur and Mepham so now the games become really competitive. We’re starting to play our best games when it counts the most.”
Carey travels to Calhoun this Friday for a 4:45 p.m. start.