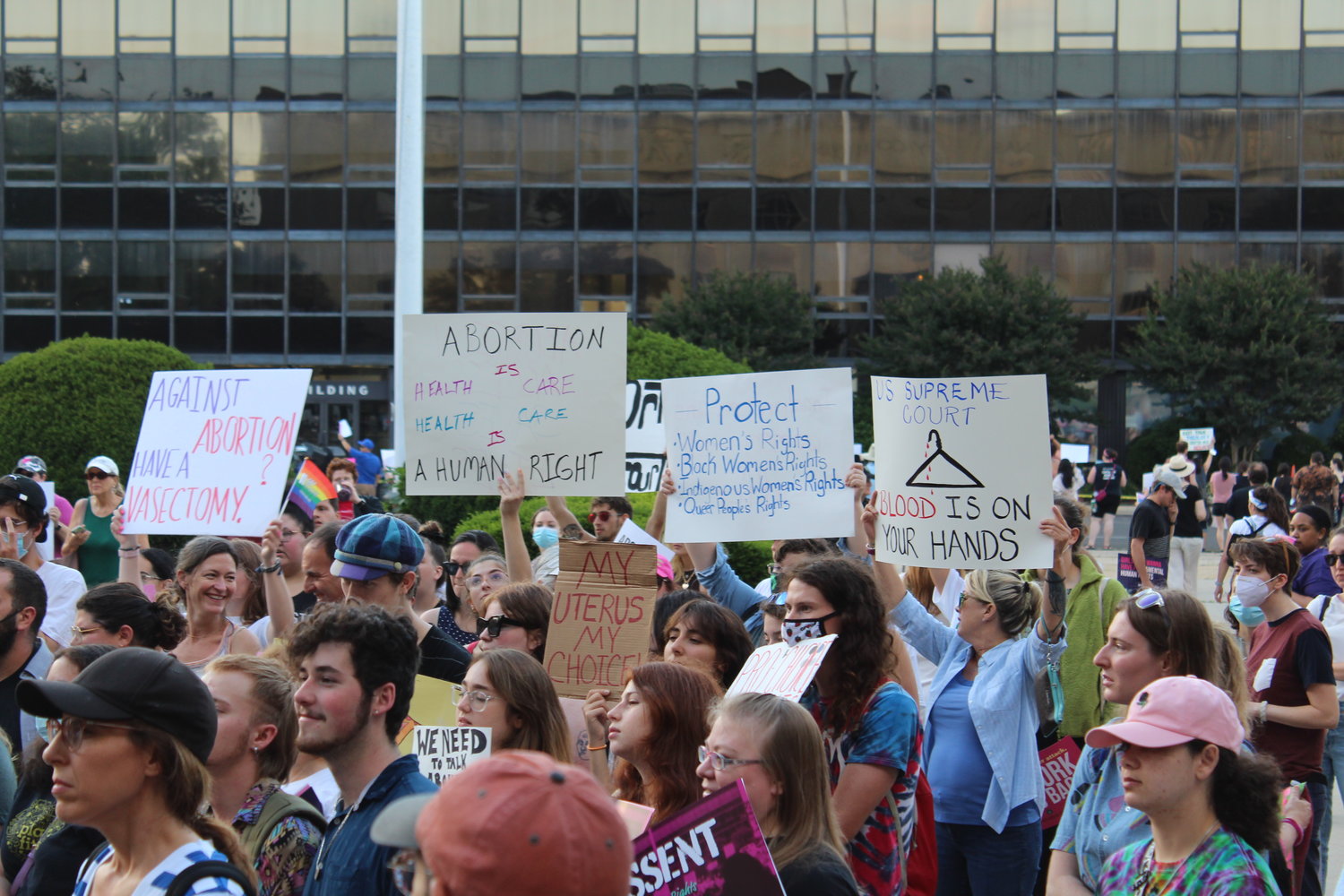 A moment of silence was observed during last week’s impromptu rally in front of the Nassau County Courthouse mourning states where abortion will be illegal now that Roe v. Wade has been overturned.
Photos by Karina Kovac/ Herald photos 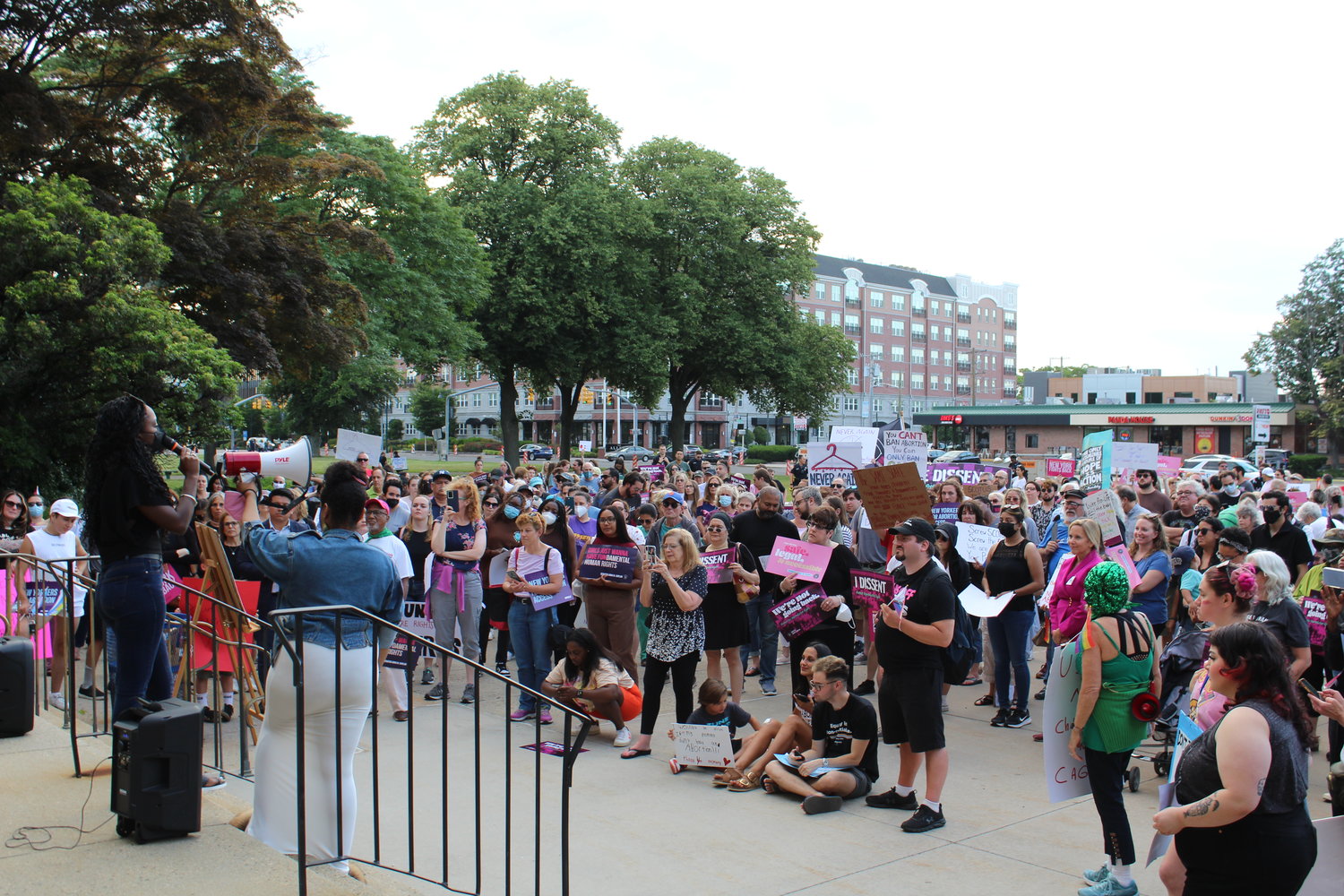 Nia Adams from Long Island Progressive Coalition, speaks to some 200 people who gathered outside the Nassau County Courthouse in Mineola in the hours following the U.S. Supreme Court’s decision on abortion access.
Photos by Karina Kovac/ Herald photos 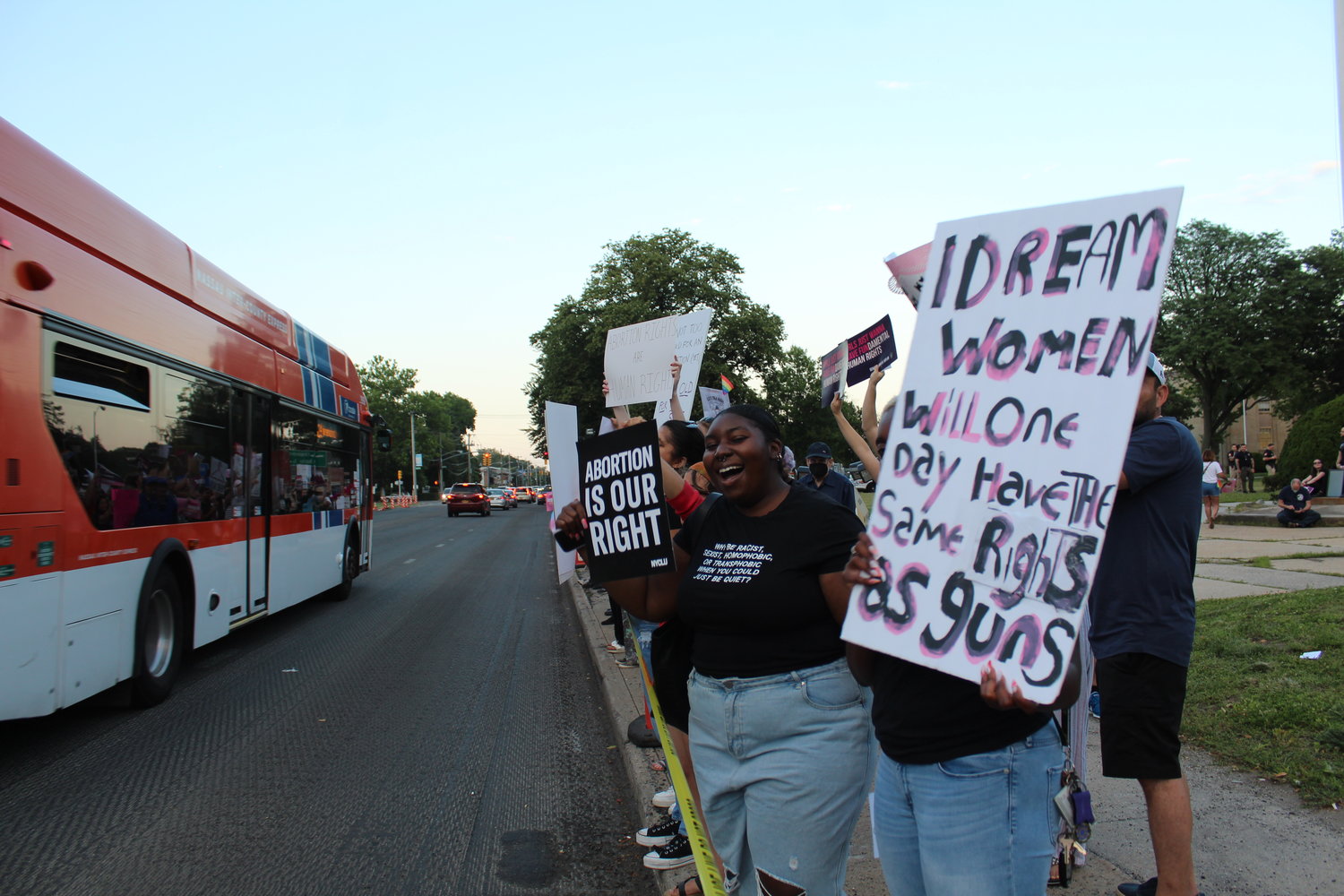 Protesters chanted ‘my body, my choice’ and ‘vote them out’ to cars driving along Franklin Avenue.
Photos by Karina Kovac/ Herald photos
Previous Next
What they say

There were opinions from all sides following last week’s U.S. Supreme Court decision on abortion rights, including fromn local lawmakers.

“The public health ramifications of this ruling will be enormous, especially for economically disadvantaged women who already struggle with access to health care,” Nassau County legislator Kevan Abrahams, a Democrat, said in a statement. “If we are to stop the backward slide that we are now witnessing in our nation, we must organize, mobilize and vote, because our freedom and personal liberty are at the top of the ballot.”

Anthony D’Esposito, a Republican on the Hempstead town council, told his Twitter followers that he was “strongly opposed” by the decision of state Democrats to “enact the nation’s most extreme abortion law, legalizing late-term and partial-birth abortion, allowing abortions to be provided by non-doctors,” and removing criminal penalties for what he described as “assaults on pregnant women,” causing “unborn child death.”

“Today’s decision by the U.S. Supreme Court neither upends that unpopular law, nor affects the ability of any woman in New York to have an abortion,” D’Esposito added.

“Here’s the truth,” said Josh Lafazan, a Democrat on the Nassau County Legislature, who is running for Congress. “Anti-choice extremists have demonstrated for years that they are willing to stop at nothing to get what they want.”

It started with a moment of silence. Then screams. And then it was a furious rage.

That was the scene outside the Nassau County Courthouse in Mineola on Friday in the hours following the U.S. Supreme Court’s decision in Dobbs v. Jackson Women’s Health Organization that is widely seen as overturning the U.S. Constitutional protection given to abortion access in 1973’s Roe v. Wade decision.

The 6-3 ruling found in favor of a 2018 Mississippi state law that banned most abortion procedures after the first 15 weeks of pregnancy. When it came to Roe v. Wade — and a 1992 ruling in Planned Parenthood v. Casey that reinforced that original decision — the court was more divided, with Chief Justice John Roberts joining the liberal minority. But that wasn’t enough to maintain the constitutionality of abortion access, losing 5-4.

Friday’s courthouse protest was organized by Long Island Rapid Response I Dissent Rally, which got a head start on the decision thanks to an unprecedented leak of the majority opinion last month. Rally organizers believe some 36 states will now make abortion illegal.

New York will not be one of those states, however. The state legislature has already codified Roe v. Wade, keeping its abortion access intact. However, other states are expected to remove such access, including in pregnancies resulting from sexual assault and incest in states like Arkansas, Texas and Missouri.

Many states pre-empted the decision with so-called “trigger bans,” making abortion illegal there the moment the court removed its Constitutional protection.

“Oppressing access to reproductive health is a racial justice issue,” Nia Adams of the Long Island Progressive Coalition, told the courthouse crowd on Friday. “To add further insult to injury, the facts remain that Black maternity mortality rate in this country is four times higher for Black women than for our white counterparts.”

Ellen Meister is no stranger to such protests. Hailing from Jericho, she attended her first march in 1982 in Washington.

“It’s been a long time and I’m tired, but I’m here because it’s important,” Meister said. “I’m long past the age where it’s going to matter to me, but I care about women’s rights and bodily autonomy.”

She held up a sign with a bloodied coat hanger, symbolizing how society can’t go back to barbaric and unsafe methods of abortions.

“I wanted to make a really dramatic statement because this is reality,” Meister said. “People are going to die.”

But not everyone was disappointed in the decision. U.S. Rep. Lee Zeldin, who is seeking the Republican nomination for governor, called the court’s decision a “victory for life, for family, for the Constitution, and for federalism.”

“Today is yet another reminder that New York clearly needs to do a much better job to promote, respect and defend life,” the congressman added.

Northwell Health released a statement soon after the decision, saying it was disappointed by the court’s ruling.

“This decision is a setback for women’s reproductive health. Our concern as the region’s largest health care provider is that this ruling will succeed in ending access to safe abortions and disproportionately cause harm to those who already have limited access to health care.”

Jay is worried about that as well. They held a sign at the rally declaring “abortion is trans health care,” telling a reporter how  the transgender community continues to be excluded from the conversation.

“We’re not only women, even though women are very important to the conversation, obviously,” Jay said, “but I think it’s important to remember our marginalized communities that’re disproportionally affected by this.”