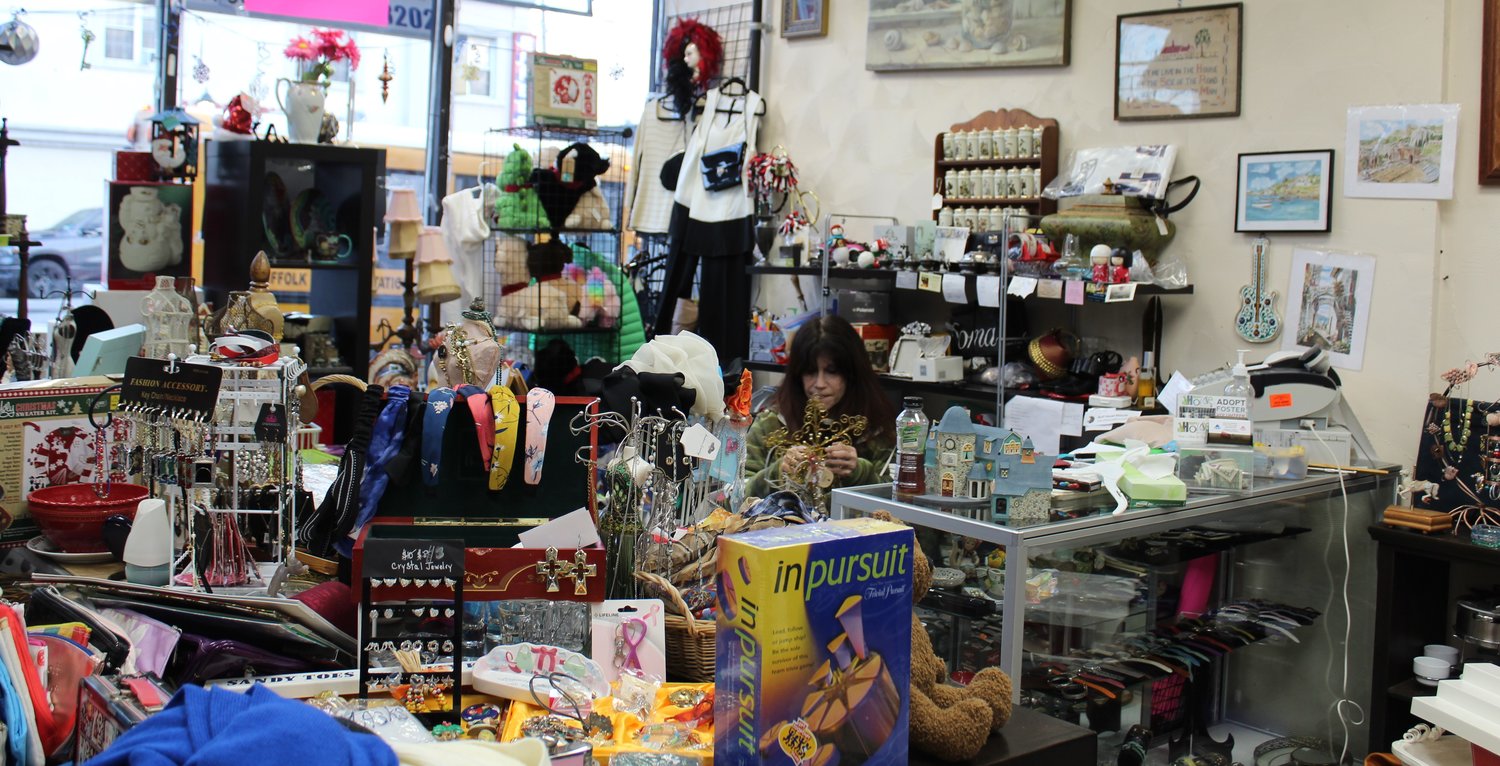 The Thrifty Paws is located at 2438 Grand Ave., and volunteers ask that you call 516-318-9753 ahead of time to double check the hours the day of your visit.
Karina Kovac/Herald

I just want it to be successful and make a lot of money for the dogs…I love them.”
Eileen Stewart, volunteer
By Karina Kovac

Thrift Paws, a thrift store on Grand Ave, gives back to the Baldwin community and heads the organization Ruff House Rescue in Oceanside. The shop, which is completely run by volunteers all over Long Island, sends all the proceeds they get from selling goods into a fund for the dogs and cats at Ruff House Rescue.

Thrifty Paws was originally located in East Rockaway, but because they needed more space for their goods, they moved into their location in Baldwin last March. In the store they sell clothes, house décor, pet supplies, jewelry, Christmas items and an assortment of other knick-knacks.

Head volunteer Eileen Stewart started working for Ruff House two and a half years ago after her dog passed away and she adopted a new white fluffy from Ruff House. Feeling the need to give back after the experience, she told the Herald, “I just want it to be successful and make a lot of money for the dogs…I love them.”

Speaking about the ten volunteers that work at the shop, Stewart recognizes that everyone is passionate, stating, “We all care, or we wouldn’t do it.”

They accept cash or Venmo at the thrift store, but depending on the circumstances of who comes into the shop, sometimes they don’t charge at all. There have been times when homeless people would explain their down-on-their-luck situation and a volunteer has given them a suitcase or jacket without accepting their pennies in return.

One volunteer, Lorreta M., has been involved in various pet volunteer organizations since she was a teen. Coming to the store originally just to shop, she discovered the opportunity to volunteer and has been doing it for a couple months now, proclaiming that she is a “big dog and animal advocate.”

Ruff House Rescue was founded 12 years ago by Diane Indelicato, executive director, when she learned how many animals were euthanized in shelters by owners relinquishing their pets. She said that seeing that turned her to action, “Our charity was born to raise money to save animals and send them to new homes.” Every year approximately 2.7 million adoptable dogs and cats are euthanized in the U.S. alone.

Ruff House has now become the largest 501c dog rescue on the South Shore and also assists in the adoptions of cats. During the 12 years in service, they have adopted out at least 12,000 dogs. Stewart herself makes home visits to check the adequacy of Baldwin homes where many adopters reside.

Ruff House rescues dogs and cats from many different high-kill shelters around the country and sometimes outside of the United States. The donations from the shop will go to transportation, kennel housing, food and medical expenses, “which is plenty,” stated Stewart, adding that Ruff House has “saved all those lives.”

Those who wish to donate clothing or items can go directly to the shop on 2438 Grand Ave. To volunteer or get more information on Ruff House Rescue, you can go to RuffHouseRescue.org or check out their Facebook Page.