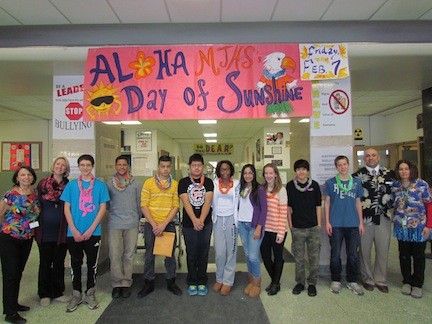 At Memorial Junior High School, it’s important to get good grades but it’s also important to be a good person. Teachers and administrators want students to be of the highest character, often a tough goal to accomplish in a building with more than 1,000 teenagers.

The staff’s effort is making a difference, as Memorial has been named an Emerging School of Character by The Academy for Character Education. The school will receive its award at a ceremony on April 9.

“We’re very honored to have this award,” said Principal Anthony Mignella. “It means a lot for our school.”

Mignella said there are numerous programs that the school runs to teach children positive behavior. It all comes from the school’s BRAVE Committee, a collaboration of teachers and administrators who meet regularly to discuss ways to reduce bullying and foster character development.

Stand Up Day honors former health teacher Stephanie Ginsberg, who died in 2012. She created a program that teaches children to be kind and to stand up for others. This year’s Stand Up Day was a collaboration of Memorial students and their older counterparts at nearby Central High School.

In January, the school held No Name Calling Week. Students learned about sympathy, empathy and the emotional impact of mean statements. A Day of Sunshine on Feb. 7 was designed to brighten students’ spirits during a dreary winter. Students and teachers were asked to wear Hawaiian and brightly-colored shirts, and lunch periods had a summer theme.

Everyday on the morning announcements, students hear the phrase, “Make it a great day or not. The choice is yours.” Mignella said that he often hears them repeating it in the hallways.

In October, seventh- and eighth-grade students took a survey about the school climate. They were asked to identify areas where they felt safe, and also note spots where they felt bullying was prevalent. The results were then presented to the faculty, so they could be on alert in those problem areas.

The BRAVE Committee also tries to raise school spirit through numerous fundraisers. Committee members say it gets students to feel better about themselves in knowing they are helping others.

A good deeds award program recognizes students who have performed an act of kindness at school. Students are nominated by teachers, and receive a certificate. A letter is also sent to their parents acknowledging the accomplishment. The student with the best deed of the month is given a Ginsberg Award.

In a typical year, upwards of 400 students are honored. “That’s literally being caught in the act of doing something good,” said Assistant Principal John Squadrito.

There are usually a series of character education assemblies in March each year. Steven McDonald, of Malverne, an NYPD detective who survived a shooting in 1986, will speak to ninth graders about violence and forgiveness. Eighth-graders will hear about cyberbullying, which Squadrito said is a concern because that often occurs outside of the school day on social media.

Mignella explained that the character education program is so extensive because the messages need to be reinforced on a daily basis to be effective. “It can’t just be a one-time thing in the middle of the year,” he said. “The teachers do a lot of this in the classroom. If it wasn’t for them, none of this would happen.”

Squadrito said that he believes the school’s character education initiatives overall are making a difference. He said that it has changed the way students deal with conflict, and that is evident through a reduction in suspensions. “There’s a general sense of caring on the part of the students,” he said.

BRAVE stands for Believe in the Rights and Values of Everyone. In addition to Mignella and Squadrito, other members of the committee include social workers Maggie McConnell and Joann Hundertmark, librarian Joan Mahoney, Student Activities Director Tracy Alesia and teacher Susan Krause.

Alesia said the committee’s mission is to make students feel proud of themselves and proud to be a student at Memorial.

Members of the committee hope that the award, which was earned following an extensive application process, will be the first of many.