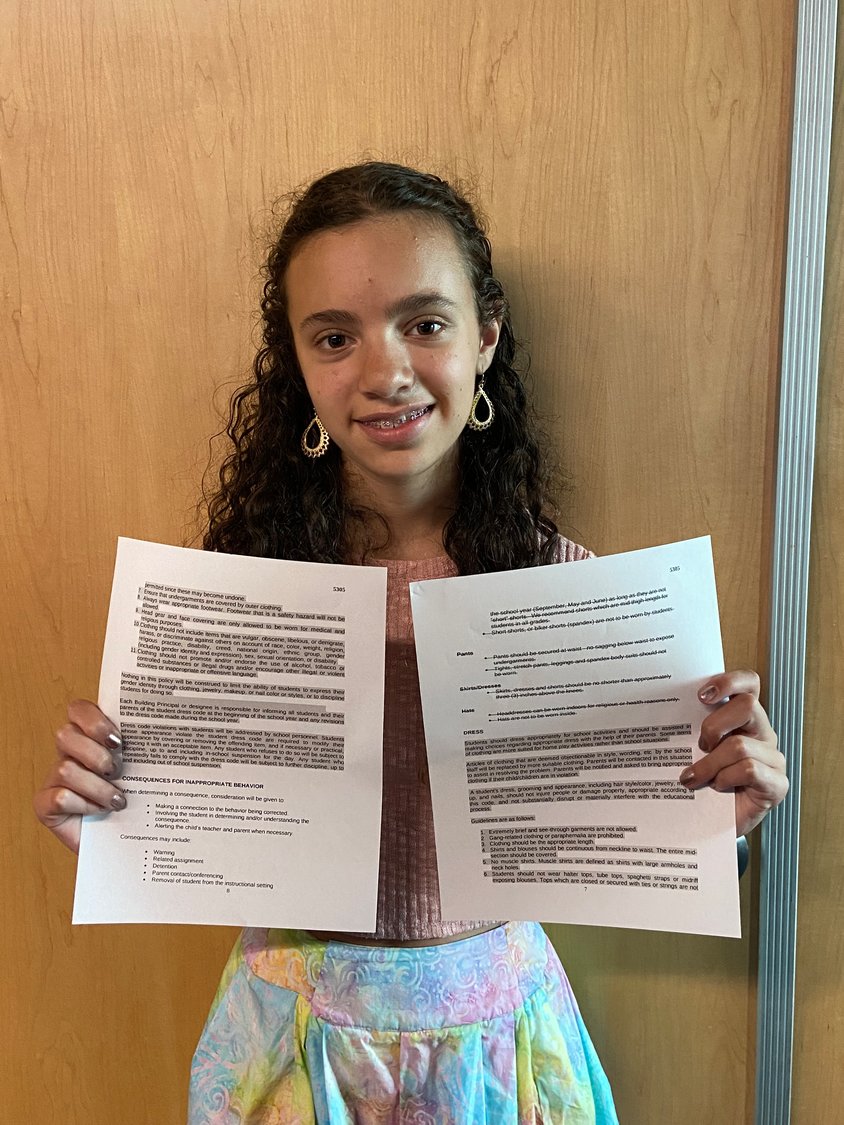 Sabrina Rosenberg, 12, called for changes in her school’s dress code policy. On Aug. 3 at the East Meadow Board of Education meeting, the board did the first reading of the new code. It will be voted on at the Aug, 24 BOE meeting.
Mallory Wilson/Herald
By Mallory Wilson

Woodland Middle School student Sabrina Rosenberg saw the East Meadow School District was rocking an “old school” dress code, and the 12-year-old decided it was time for a change.

Sabrina was flipping through her school-issued planner when she came across the district dress code. What she found was an outdated policy that seemed very unfair to some students, especially girls.

After writing an opinion piece for the school newspaper, speaking at a Board of Education meeting, and meeting with Superintendent Kenneth Card and Board of Education President Alisa Baroukh, Sabrina heard the first reading of the new dress code policy at the most recent BOE meeting on Aug. 3.

“I didn’t think it would get this far,” Sabrina said. “I imagined they would do something but I didn’t know what, and I didn’t think I’d be involved in the process but it feels really nice.”

Sabrina said that she wrote her piece — “An Old-School Dress Code and Current Times” — for her school newspaper, the Woodland Word, in the beginning of the school year. After many revisions, it was published in the early spring. The story was sent to the BOE and she spoke at their March 9 meeting.

The piece outlined everything about the dress code she felt should change. This included leggings and bike shorts being banned, the length requirement of shorts and skirts, heavy metal T-shirts not being allowed, and spaghetti strap tank tops, among other rules.

“It was really biased,” Sabrina said of the dress code. “A lot of it was just old and it was biased against girls.” She also pointed out that the restricted dress list for girls was six times as long as the list for the boys.

Even though neither she nor any of her friends have ever been called out for dress code violations, she still felt like a change needed to be made. “I was just not happy with the dress code,” Sabrina said. “It made me really mad actually, it was really restrictive.”

For her, getting leggings and the heavy metal t-shirts off the dress code list was a priority.

Encouraged by her parents to speak at the March 9 meeting, Sabrina was met with support and applause from the board and the crowd.

“We love when we hear from our students,” Baroukh said at the meeting. “It happens to be a topic that is near and dear to my own heart in my own family.”

Card, Baroukh, and Sabrina continued the discussion at the Salisbury Center on March 24.

“We talked about what I didn’t like specifically and we looked at it really closely,” Sabrina said. “We found points on which we agreed should be changed and which should stay.”

After attending every board meeting since she spoke, Sabrina heard change was coming on Aug. 3. Assistant Superintendent for Personnel and Administration Anthony Russo said that the revisions were based upon guidance provided by the New York State School Boards Association and the middle school level principals.

“What we did was we took the sample policy that was recommended by the school boards association and adapted it to East Meadow,” Russo said at the Aug. 3 meeting. “We essentially eliminated much of the language that was in the previous code of conduct regarding the dress code and replaced it with what’s currently recommended.”

Card said that he felt that the new dress code reflected a more gender-neutral policy. “I think we’re moving in the right direction,” Card said. He called Sabrina a “social justice warrior.”

Parts of the “Old School” dress code are included in the new version, like prohibiting spaghetti straps, or having midriffs completely covered.Sabrina is excited to hear the final reading at the August 24 BOE meeting and see the board vote to approve it.

“I just wanted to highlight that when a student gets involved for the right reasons, they can make a tremendous difference and this was a great thing,” BOE member Jodi Luce said at the Aug. 3 meeting.

Becoming a facilitator of change made Sabrina look at other areas of her school. Being on the robotics team, school newspaper, tech crew, and working in the school store, she wants to see extracurricular activities receive more funding. “The robotics team at my school really needs funding,” she said. “The school newspaper has been lobbying for a real website instead of a Google site.”

Sabrina enjoyed being an agent of change and was proud liked that her younger sister won’t have the same dress code she had.

“It made me feel good inside like I could be a role model,” she said.