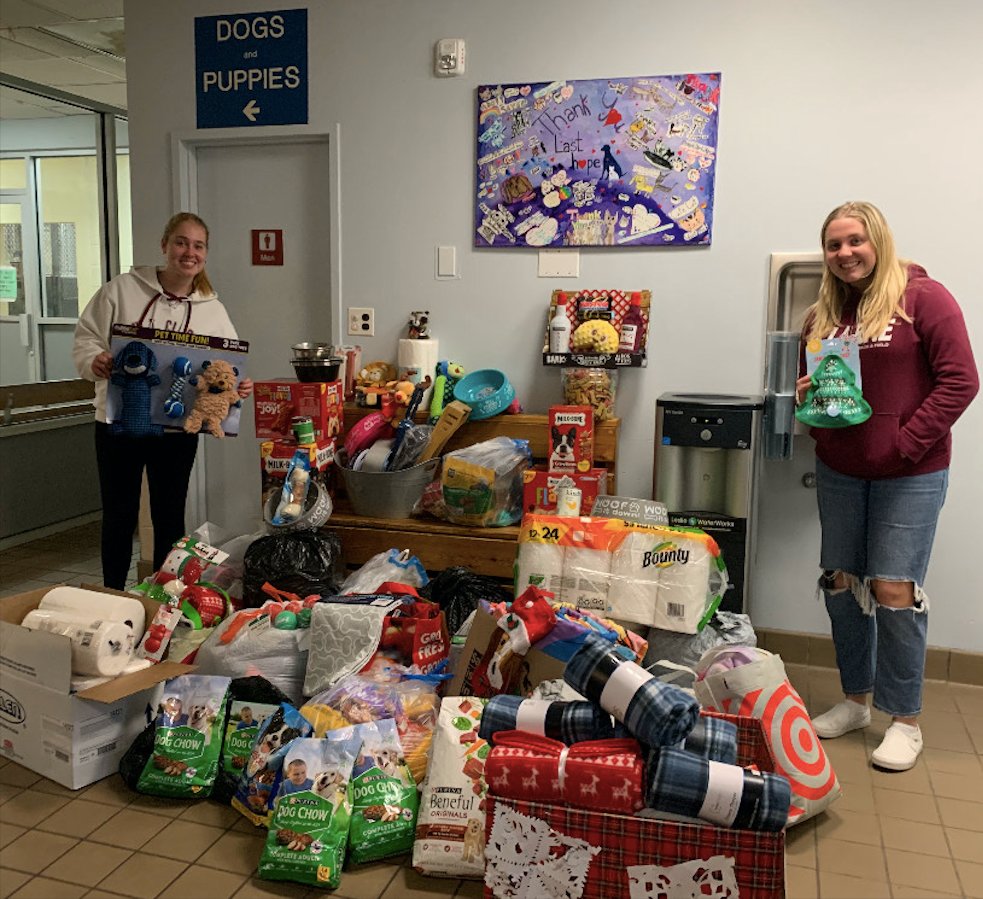 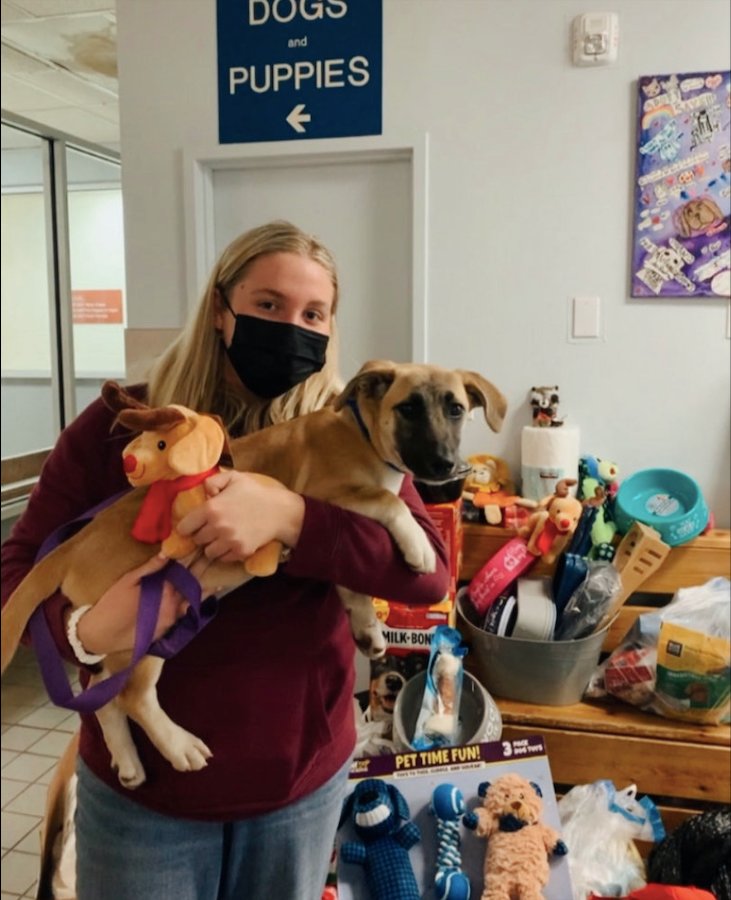 Ella Noonan with Delta, who was adopted the day the club brought the supplies.
Courtesy Ella Noonan
Previous Next
By Mallory Wilson

Hundreds of dog toys, leashes, collars, blankets, beds, treats and cleaning supplies were dropped off at the Wantagh center by Clarke seniors Ella Noonan — the club’s founder — her twin sister, Brooke, and their mother, Maura.

Ella Noonan founded the club in February 2020, attracting more than 50 students to the first meeting. They shared ideas about what the club should do and where members should help out. Less than a month later, the school closed for in-person classes because of the coronavirus pandemic.

Nearly two years later, the club is booming, with over 100 members. When schools closed in March 2020, the club was put on hold, but when schools reopened, it started up again. At first the East Meadow School District wasn’t allowing extra-curricular activities so the club held its monthly meetings virtually by Zoom, but now members can meet in person.

“I started this club because I felt like we didn’t have an animal-based club for the community,” Ella said. “Most people here have dogs and like dogs, and I thought it would be a great thing to educate high school students about.”

Middle school students have even reached out wanting to join the club, she said.

Donation boxes were set up in the circle in front of Clarke from Nov. 29 to Dec. 13 for anyone to donate. Within days, the boxes were overflowing and had to be cleaned out.

“The box had wrapping paper and bows on it,” Brooke said. “Teachers, students and parents of kids who weren’t in the high school dropped stuff off, too.”

When the sisters brought the supplies to Last Hope, they received a tour of the center and met some of the dogs.

Last Hope officials were impressed, Ella said, noting, “They were in shock with how much stuff we brought. They were overwhelmed in a good way.”

During Thanksgiving break this year, the Dog Rescue Club partnered with the high school’s Key Club – a student service club that works with East Meadow Kiwanis – to create thank you cards for Last Hope volunteers. Brooke is the Key Club president, and Ella is vice president.

“To have outside kids thank the volunteers for what they do and what they love to do is so nice,” Anderson said. “It’s like the icing on the cake.”

Both Ella and Brooke are involved in Key Club as well, which helped attract members to the Dog Rescue Club. The idea to give cards to volunteers was Brooke’s, because Key Club does something similar.

“We always do cards for veterans or health care workers,” Brooke said. “They were so thankful for them.”

Looking forward, Ella and Brooke have many ideas for the club. They would like to do a dog walk at which people could bring their dogs to the high school’s track to do laps and raise money for organizations like Last Hope.

Brooke said, “It would help the dogs with their training because Joanne [Anderson] said that they haven’t been able to work in a while. But it would also be beneficial to students, especially if it was during [Advanced Placement] exams and finals as a stress reliever.”

Even though Ella and Brooke are now seniors, they have high hopes for the future of the Dog Rescue Club.

“If this club now has 100 members, it should live on,” Anderson said. “It has the support of the principal.”