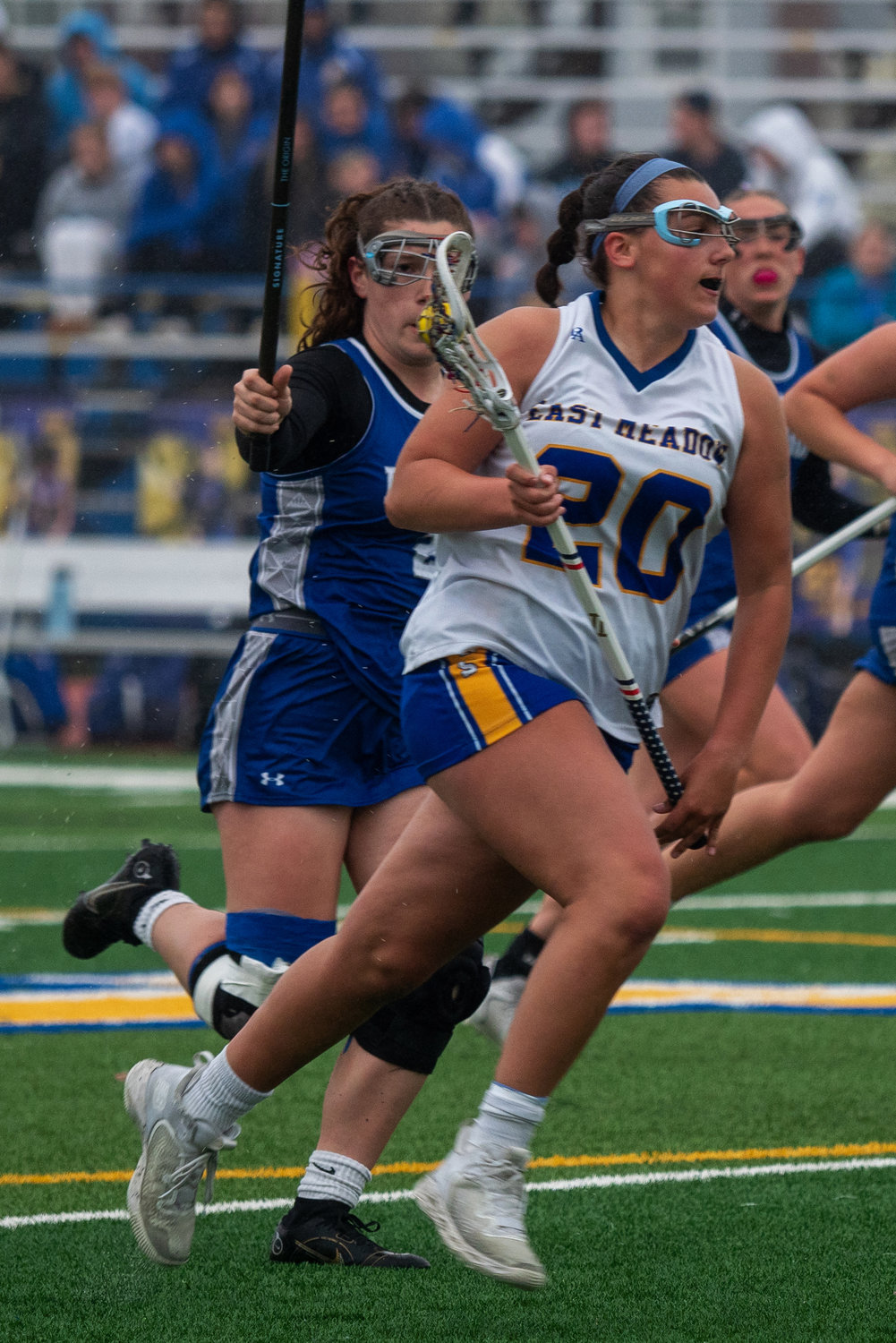 Junior Isabella Pota had nine points in a wild 18-17 victory over Floral Park that refuled the Jets in late April.
Eric Dunetz/Herald
By Brian Kacharaba

The losing that plagued the East Meadow girls’ lacrosse team last season is starting to disappear in the rearview mirror.
The Jets are heading to the playoffs thanks to a strong start to their conference schedule and 4-4 mark in the division overall. Not bad considering the team entered the season on an 18-game losing streak that dated to 2019, including an 0-14 mark last year.
The turnaround can be pointed to the demanding, but nurturing style of first-year coach Nicolette Tortorici, a newfound camaraderie amongst the players, and breakout offensive seasons from seniors Lindsay Solenski and Gina Giambald.
“We were looking for success, whether it was one game or two games,” Tortorici said. “We’re coming back from a losing streak for the last 2-3 years, so luckily, we do have a couple of talented girls who are playing on the collegiate level next year and they were very serious this year. They were our leaders on the team, and we were just able to put in the work in the offseason.”
The skid finally ended in the second game of the season, a 16-12 home victory over Plainview that featured six goals each from Solenski and Giambald and nine saves from sophomore goaltender Dynastee Ramos. The Jets lost 13-12 two days later at Oyster Bay on a tiebreaking goal with two seconds left but rebounded to beat MacArthur and Hewlett to move above .500.


“The first win that we got on our home field, it looked like they won the Super Bowl,” Tortorici said. “They were so excited, so happy and it was definitely a step in the right direction.”
East Meadow eventually slumped with one win in their next seven games, but the lone victory, an 18-17 thriller at Floral Park on April 27, was a memorable one. Solenski had an astounding nine goals and 11 points, including the 100th score of her varsity career, Giambald added five goals, junior Isabella Pota had nine points, and Ramos hung tough with 15 saves.
“I’ve played with some All-American girls at the collegiate level and in high school and travel teams and she just doesn’t stop,” Tortorici said of Solenski’s performance. “With those nine goals, she was also creating so many opportunities for Isabella Pota [and] for Gina too. She not a ball hog.”
But East Meadow may need more scoring depth during the playoffs. Solenski, who has 57 goals at press time, and the lefty Giambald, who upped her total from 10 last season to 34 this year, represents 78 percent of the team’s tallies this season. Pota’s 15 upps that total to 91 percent.
Sophomores Skylar Egan and Alexis Chew have the next highest totals with five and three, respectively.
“We see the girls in practice, and we see more than Lindsay, Bella and Gina,” Tortorici said. “If you came to our practice, we definitely have five other girls that are ripping shots in practice. I think a lot of our underclassmen hide behind the seniors and are a little timid to get into the play.”