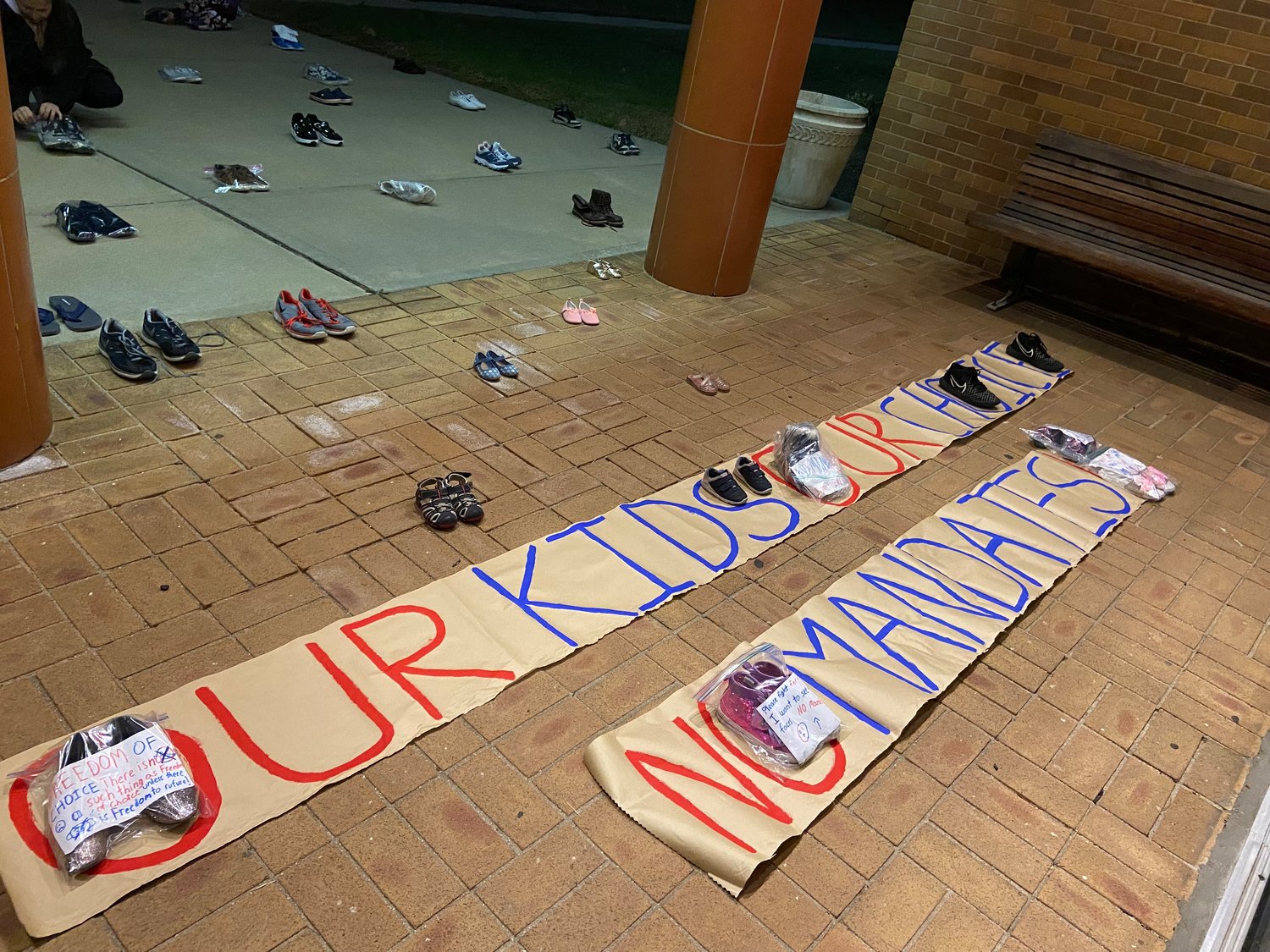 A large sign from those favoring parental choice was spread out outside the Leon J. Campo Salisbury Center, where all of the shoes for the shoe drop were left.
Mallory Wilson/Herald 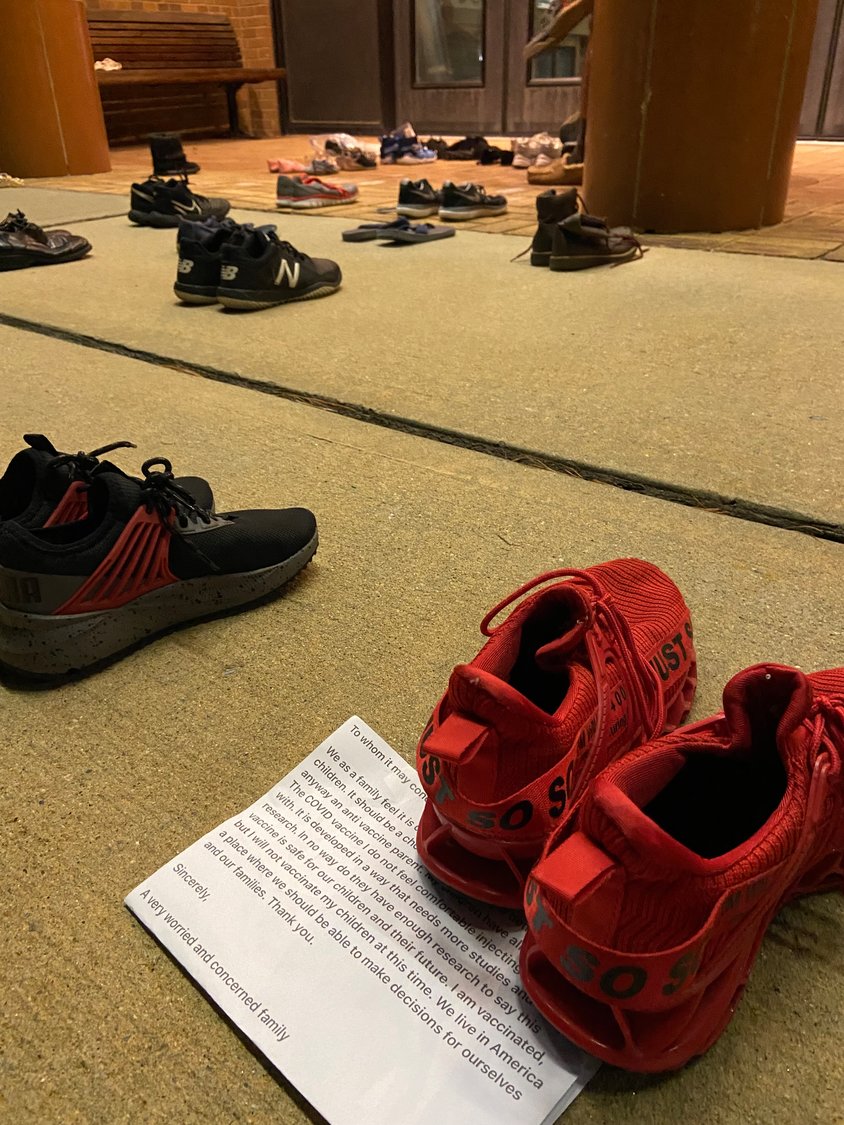 Almost 150 pairs of shoes were collected in the East Meadow shoe drop, which will be donated.
Mallory Wilson/Herald
Previous Next
By Mallory Wilson

About 150 East Meadow residents last week took part in Operation Shoe Drop, a peaceful protest in response to school Covid-19 mandates. Parents in 50 districts across New York state dropped off pairs of shoes, some with notes and some without, to make a statement.

Dropping off shoes in front of schools was meant to represent students walking out of school or leaving the district if mandates were to persist, said Kim Boyette, of Merrick, who started Operation Shoe Drop’s Long Island Facebook page Nov. 13. It now has 6,000 followers.

Nicole Horak, an East Meadow parent who was among those taking part in the local shoe drop, said it was a group effort. After seeing the post on one of the Facebook groups she follows, Horak worked to let others know about it.

“I wanted to help in any way I could so we the people could get our point across that we make the decisions when it comes to our children,” she said. “We do not parent with the government.”

According to the Centers for Disease Control and Prevention’s website, “Students benefit from in-person learning . . . vaccination is the leading public health prevention strategy to end the Covid-19 pandemic.”   The site further states, “Due to the circulating and highly contagious Delta variant, CDC recommends universal indoor masking by all students (age 2 and older), staff, teachers, and visitors to K-12 schools, regardless of vaccination status.”

The first shoe drop was in California in early November, though Boyette said New York’s effort has become bigger.

East Meadow’s shoe drop was at the Leon J. Campo Salisbury Center on the Plain Road in Westbury, where school board meetings are held.

“These are our kids and this should be our choice,” said Maria Perez, an East Meadow parent of an 8-year-old attending Meadowbrook Elementary School. “...We birthed them, they’re ours, and their health is our concern.”

Rosemarie Arigo, an East Meadow mother of three, said the shoe drop was important because parents needed to make the point to the school district and state that parents should be allowed to make choices for their children.

“We don’t want to be forced to do something that we don’t feel comfortable doing,” she said.

New York state mandates that all students, staff members and visitors in schools must wear masks. Currently, there is no mandate for students to receive the Covid-19 vaccine, but there is growing concern among parents opposed to the vaccine that there soon will be.

“I think I should be able to make the choice for my own kids,” Arigo said. “This vaccine is so brand new and I don’t know what the long-term effects are, and I think it should be a parent’s choice. If other parents want to do it, that’s great. That’s their choice, and this is mine.”

When it comes to pushing parents, there will always be pushback from parents to protect their children, Perez said.

“We should not be told that our child can’t go to a public school that our tax dollars pay for,” she said.

All of the shoes that were collected the morning after the shoe drop by Wendy Yao, an East Meadow resident, were donated to the Long Island Coalition for the Homeless on Albany Avenue, in Amityville. Yao said the signs will be sent to Gov. Kathy Hochul.

Hochul said she would allow the State Department of Health to look into ways to relax some of the mask mandates if New York were to pass the holidays without a spike in Covid-19 cases.

Parents said they hope the protest would lead to a conversation. “Maybe we’ll get a meeting where they’ll listen to us,” Arigo said. “. . . It’s a good amount of people that feel this way so maybe they’ll realize there is more of a conversation to be had.”

Jordan Vallone contributed to this story.