‘He truly loved it. He wanted to be here all the time.’ 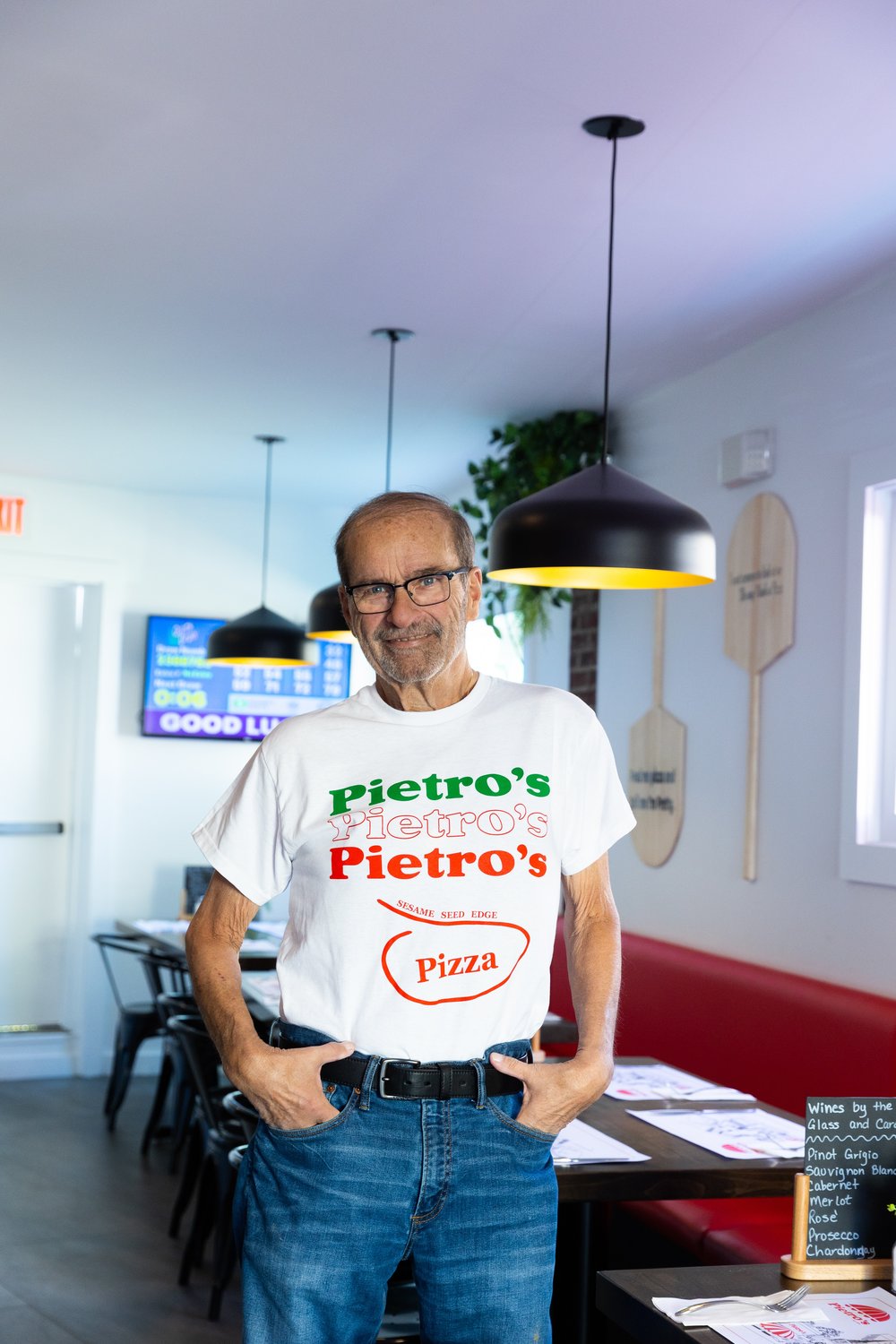 Arigo was the longtime, well-known owner of the family-run pizzeria Pietro’s. He died on Sept. 21 after a long battle with lung cancer.
Photos courtesy Lauren Maslov 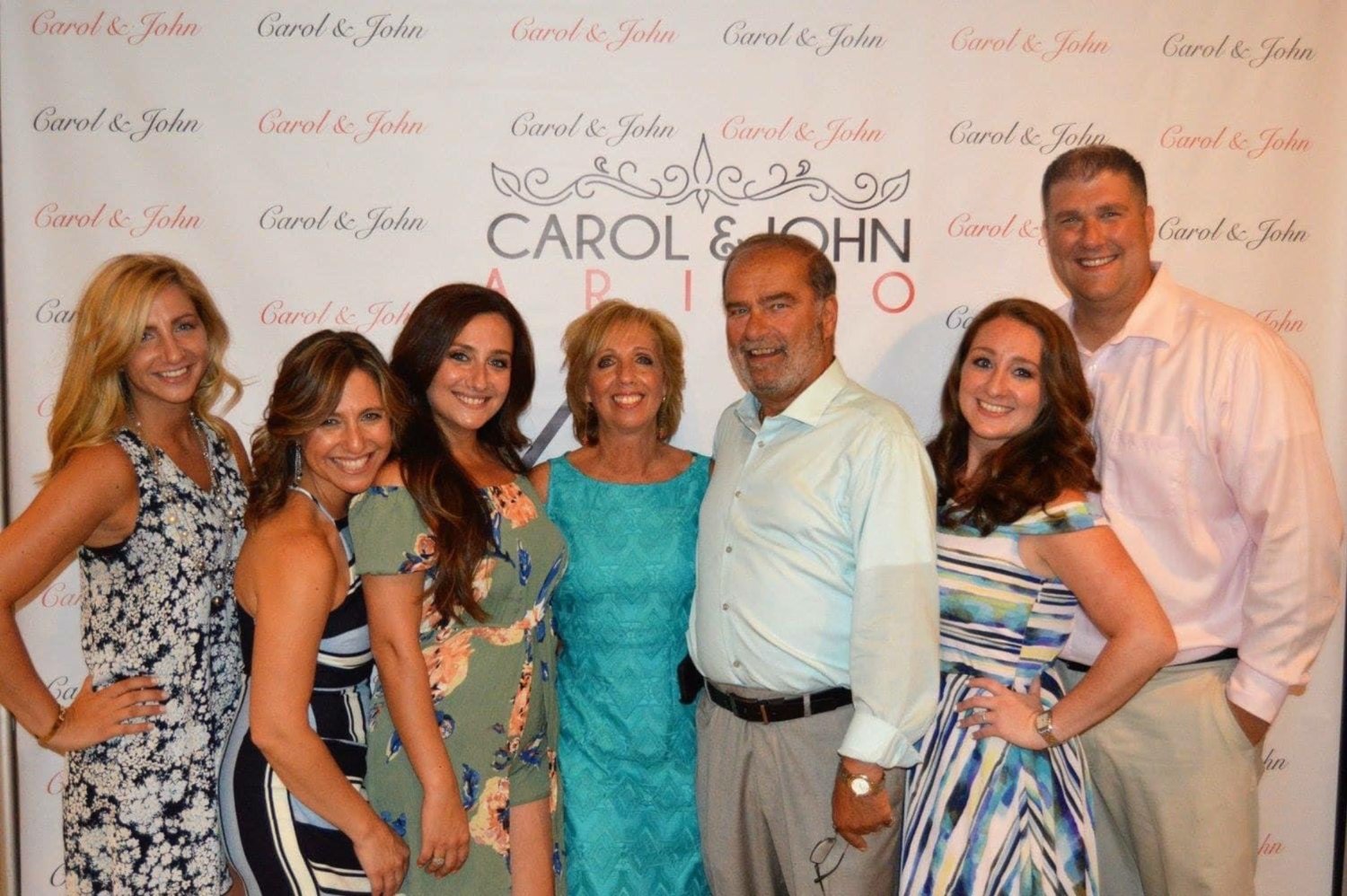 John arigo and his wife Carol, had five children. From left, in 2017, were Cheryl, Lauren, Stefanie, Melanie and Peter.
Previous Next
By Mallory Wilson

Whether you were walking into Pietro’s Pizzeria for the well-known sesame seed crust, or to get your taxes done, you recognized long-time owner John Arigo the second you saw him — and maybe even spent time discussing politics or the Mets with him. Arigo died on Sept. 21, after a 12-year battle with lung cancer. He was 66.

Arigo, an over 50-year resident of East Meadow, was a well-loved man and active member in his community. He married his wife Carol in 1977, and a couple of weeks before he died they celebrated 50 years together. They have five children Lauren Maslov, 42, Peter Arigo, 40, Stefanie Arigo, 37, Melanie Wengrod, 35, and Cheryl Arigo, 33, all raised in East Meadow.

Originally a certified public accountant, he was made partner in the accounting firm of Frederick, Goglio and Bertolli in 1984, but started his own CPA practice in East Meadow in 1989. He worked out of an office in Pietro’s to help his mother-in-law Nancy Ippolito with restaurant after his father-in-law Pete died.

In 2001, John and Carol purchased Pietro’s and continued the family tradition. For years, they worked side-by-side with five children.

“Even though he was a CPA by his trade, he ended up doing this kind of, I think, like therapy for him,” Maslov said of her father. “It was like a break from doing his numbers all day.

“He truly loved it. He wanted to be here all the time,” she continued. “He was here my entire childhood, and that might be why I love to do it so much.”

Maslov took over Pietro’s from her father in August of 2021, and has been running it with her husband, Andy.

“Even when he wasn’t doing well, he would come down and help me make pizza boxes on Friday nights,” she said. “He talked to every customer and people came here to talk to him. I think it gave them a sense of comfort to come here and see him. He was just such a staple here.”

Over the years, John was involved in various East Meadow organizations. He was a member of the East Meadow Chamber of Commerce and was president of the organization in 2005. He’s been the chamber’s honoree for Small Business Person of the Year, was honored with the chamber’s Marvin Bernstein Humanitarian Award, and worked on numerous fundraisers — either as a chair or just a participant — including the community-favorite event, Culinary Delights, always offering up his pizza for people to taste.

He was an active member of East Meadow Kiwanis, and hosted Kiwanis picnics at his home. For over 20 years, the family donated pizza pies upon pizza pies for Community Pride Day. In 2008, he was awarded the East Meadow Kiwanis Anton J. Kaiser Foundation Fellow Award for all of his donations and hard work.

“John was special,” Dolores Rome, a friend of John’s who worked with him on many Chamber events said. “He not only thought of numbers, but he also had the personality of a restaurant owner where he would sit down and he would talk to anyone while they were there for dinner. He befriended so many people.”

Rome spoke of the generosity of John and his family and how he was always willing to help out people in the community. She said that during the pandemic, John had the Pietro’s staff help prepare and deliver platters of food for essential workers and kept his restaurant open for the community.

“He just had a caring and willingness to be involved and help others,” she said. “That’s the way he was, you could always stop by if you needed something and he would help you.

“It was special to have him working (at Pietro’s) with his family,” she added. “They are just some of the greatest people.”

When Maslov posted on Facebook about her father’s passing, nearly a thousand responses flooded in. Many spoke of what a “true gentleman,” and “icon” he was in the East Meadow community, and how they enjoyed the conversations they had with him.

Whether they were an employee at Pietro’s, a former classmate, or just stopped in for the pizza, the responses show how much he was loved.

“He was the funniest person ever,” Maslov said. “He loved to tell stories, and some of my favorite memories are sitting in a booth at (Pietro’s) while he had his glass of Pinot Grigio and tell stories of the old days.”