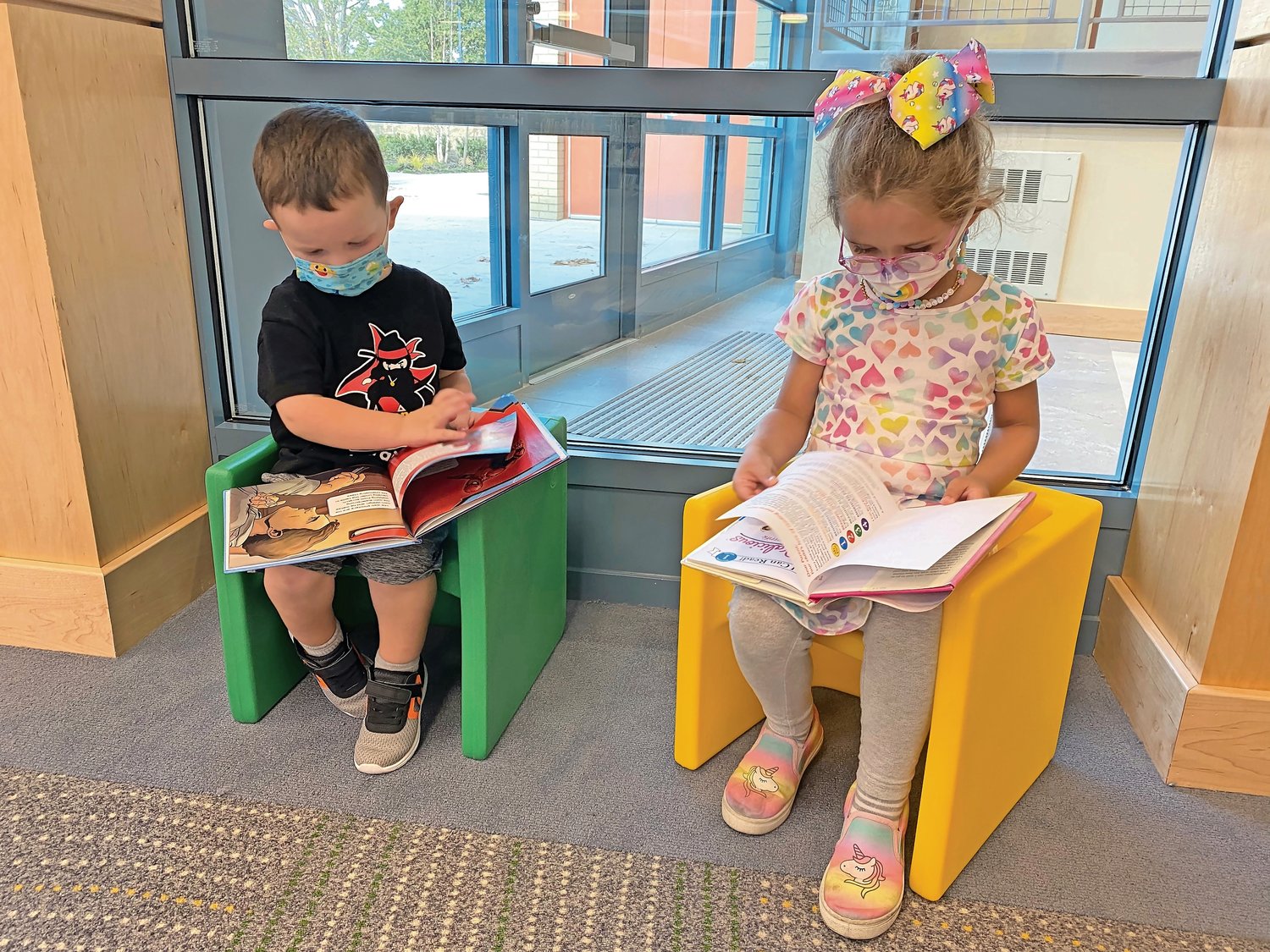 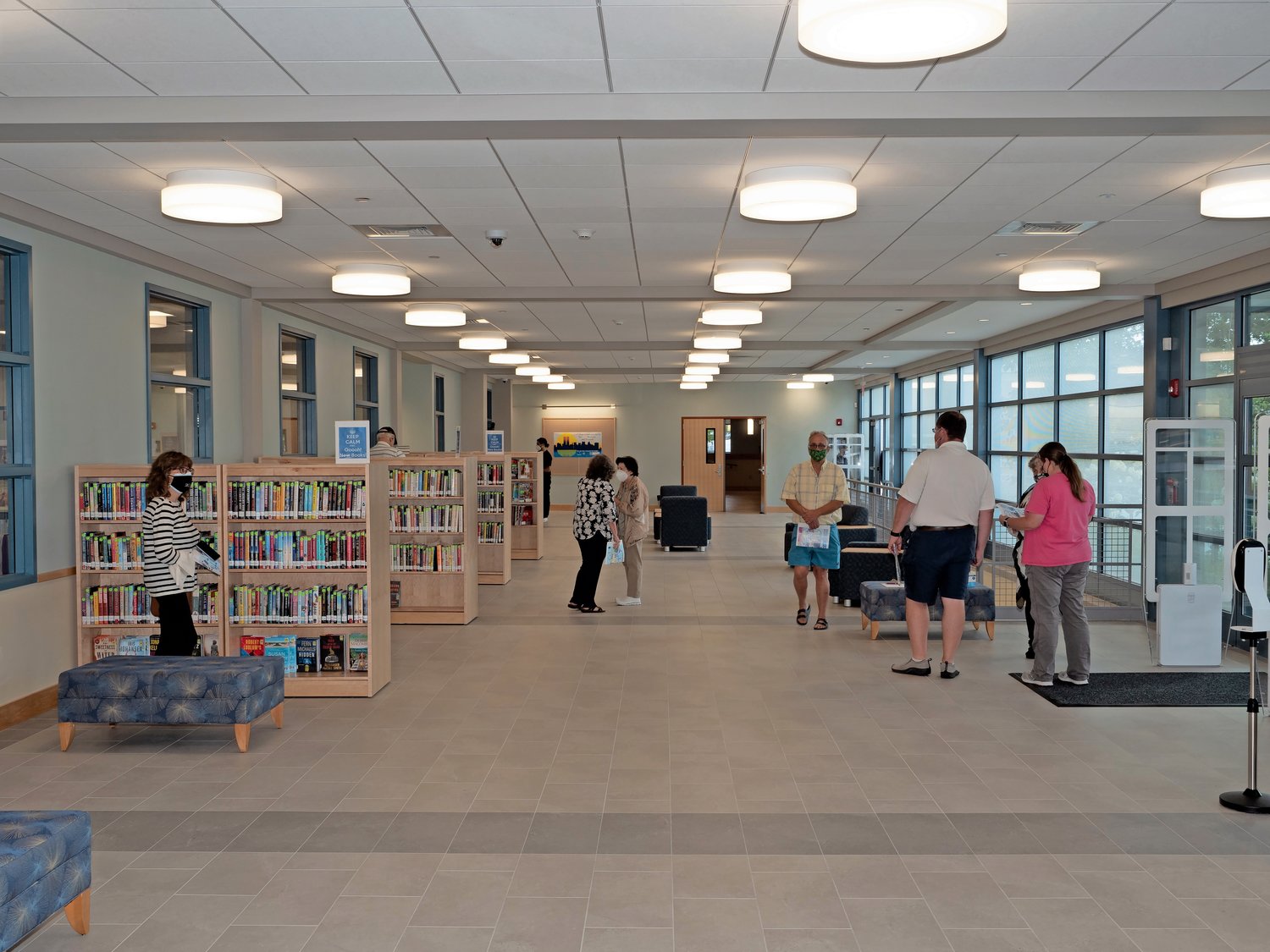 The East Meadow Public Library opened on Sept. 23 after being under renovation since 2019.
ERIC DUNETZ/Herald 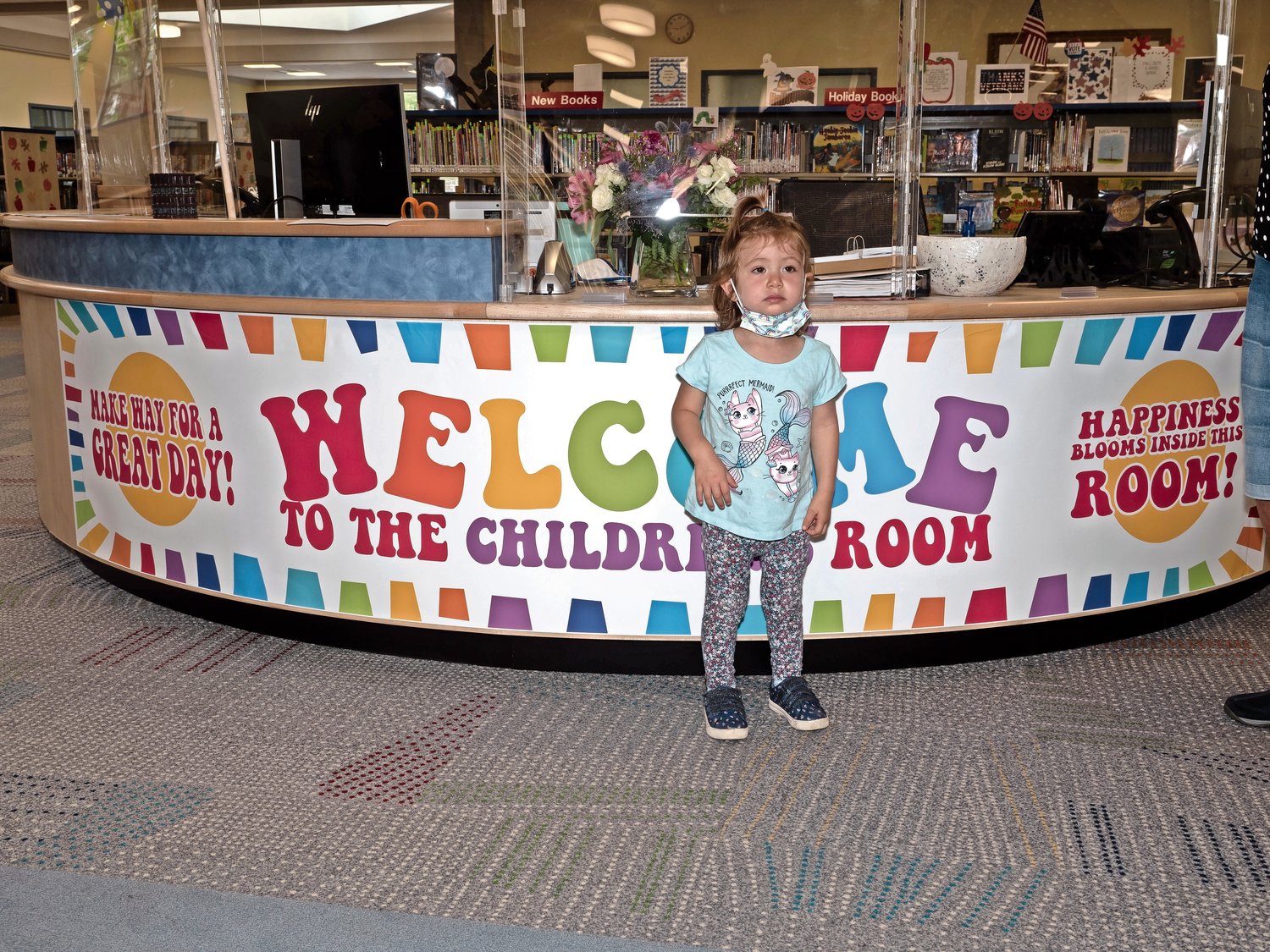 Skylar Levine, 1½, was the first visitor to the Children’s Room.
ERIC DUNETZ/Herald
Previous Next

My son squealed when he ran into the children’s area, and the librarian said she was so thrilled to hear that sound again.”
Melinda Geraghty, East Meadow
New look, new hours

Updates inside and out

- A tiered 250-seat lecture hall on the first floor east side of the building.

- An entry plaza with trees.

- A family bathroom in the Children’s Room.

The East Meadow Public Library opened on Sept. 23 after two years of construction, a relief to residents, who said they missed their library. It was a quiet opening with no fanfare to commemorate the day, but residents, who were busy exploring the new additions to the library, didn’t seem to mind.

“I think the most exciting part about the library opening is it actually opening,” Michael Turner, a library trustee, said. “Unfortunately, with Covid things kept getting pushed back and back, but finally the day is here. I think the patrons are going to really appreciate what we’ve done here.”

Turner said he has been on the board for 25 years, and it had always been a dream to renovate the library. There had been previous plans, but the project never came together, he said.

Laura Buontempone brought her granddaughter Skylar, who is nearly 2 years old, to get her library card.

“We used to live at the library before it closed,” said Buontempone, of East Meadow. “When you have two little kids going to the library breaks up the day. And we love the programs and how they help the little ones interact with other kids.”

Turner said the renovations provide for the community’s needs. The stacks of books are now accessible to youngsters in the children’s room, and the basement, which once housed the old community room, is now a “maker’s space” for young adults, with a 3D printer. Several programs will take place there in future.

But not everything has been completed, Turner said, although the library is safe for the staff and patrons. Some last-minute items that are still needed include seats for the new reading garden and a gate to enclose it. The library is also waiting for the audio-visual system for the community room.

Melinda Geraghty, from East Meadow, said bringing her children to the newly opened library was exciting. Before the library closed, she would bring her daughter, Amelia, 5, all of the time. Her son, Ryan, 2, had never been to the library.

“All of the employees are so welcoming; they really missed the kids,” Geraghty said. “My son squealed when he ran into the children’s area and the librarian said she was so thrilled to hear that sound again.”

Although there are still no in-person programs at the library, Turner said he hopes that will change by the tail end of October.

“Right now, the staff and patrons need to get acclimated to the new library,” he explained. “I still get confused as to where some things are right now so we all just need a little time.”

Geraghty said she looks forward to in-person programs resuming because she wants to hold Girl Scout meetings at the library. “They’re taking baby steps,” she said. “At least the library is open.”

Much of the library has been modernized. There is a new air-conditioning system, and the water and electrical systems have been updated as well. Making everything modern makes the library more efficient and will save the community money, Turner said.

His favorite part of the renovation is the community room. It is the only addition that changed the actual blueprint of the library. The new room, on the first level near the entrance, seats 250 people with tiered seats so everyone can see, regardless of where they are sitting.

“Our kids love the library and so do we. It’s a good community anchor,” Seth Fox, of East Meadow, said. “It’s great to see the new community room, which should help open up for more community events. I think the town really needed it.”

Apart from marveling at the new building, Fox said he liked seeing the staff. “It’s great to talk to everyone again and see their excitement about the opening,” he said.

Creation of the community room was a big selling point to the community and helped the bond pass back in 2017, according to library officials. It was determined then that the renovation would run roughly $14.6 million

“Overall, it’s great to see their vision come to life,” Turner said. “Seeing it on paper doesn’t really do it justice.”