‘This was her happy place — in the sunshine,’ a sister says 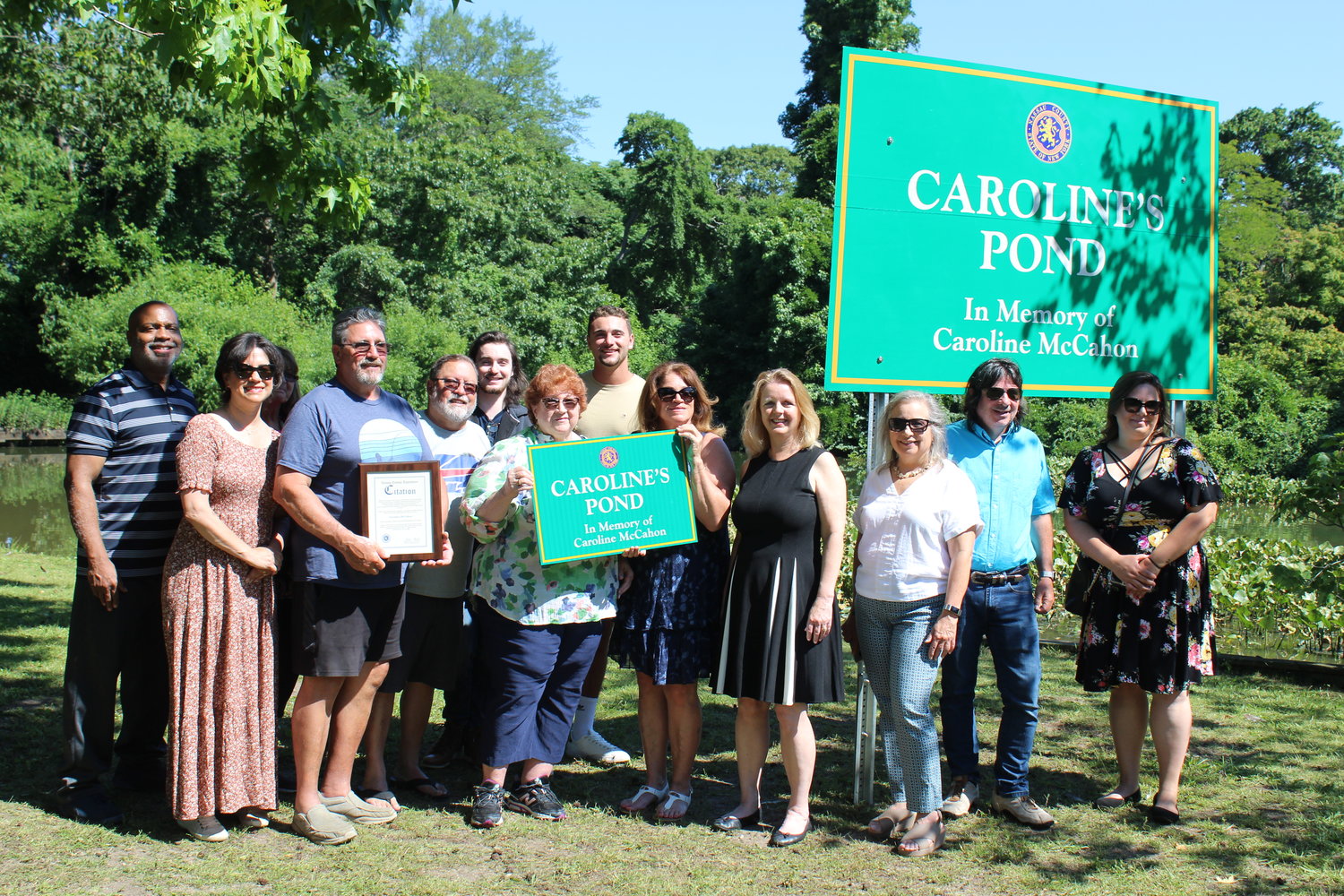 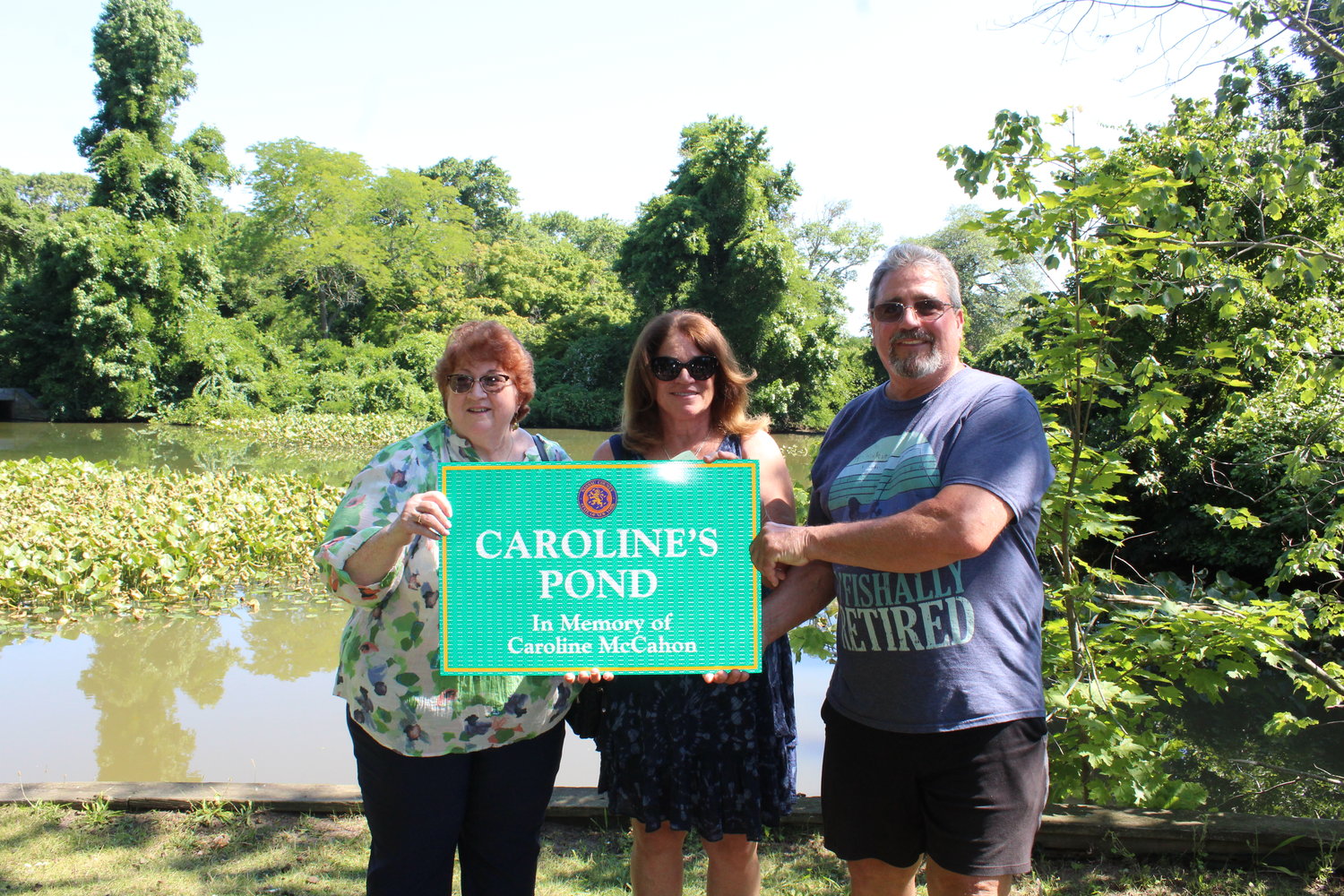 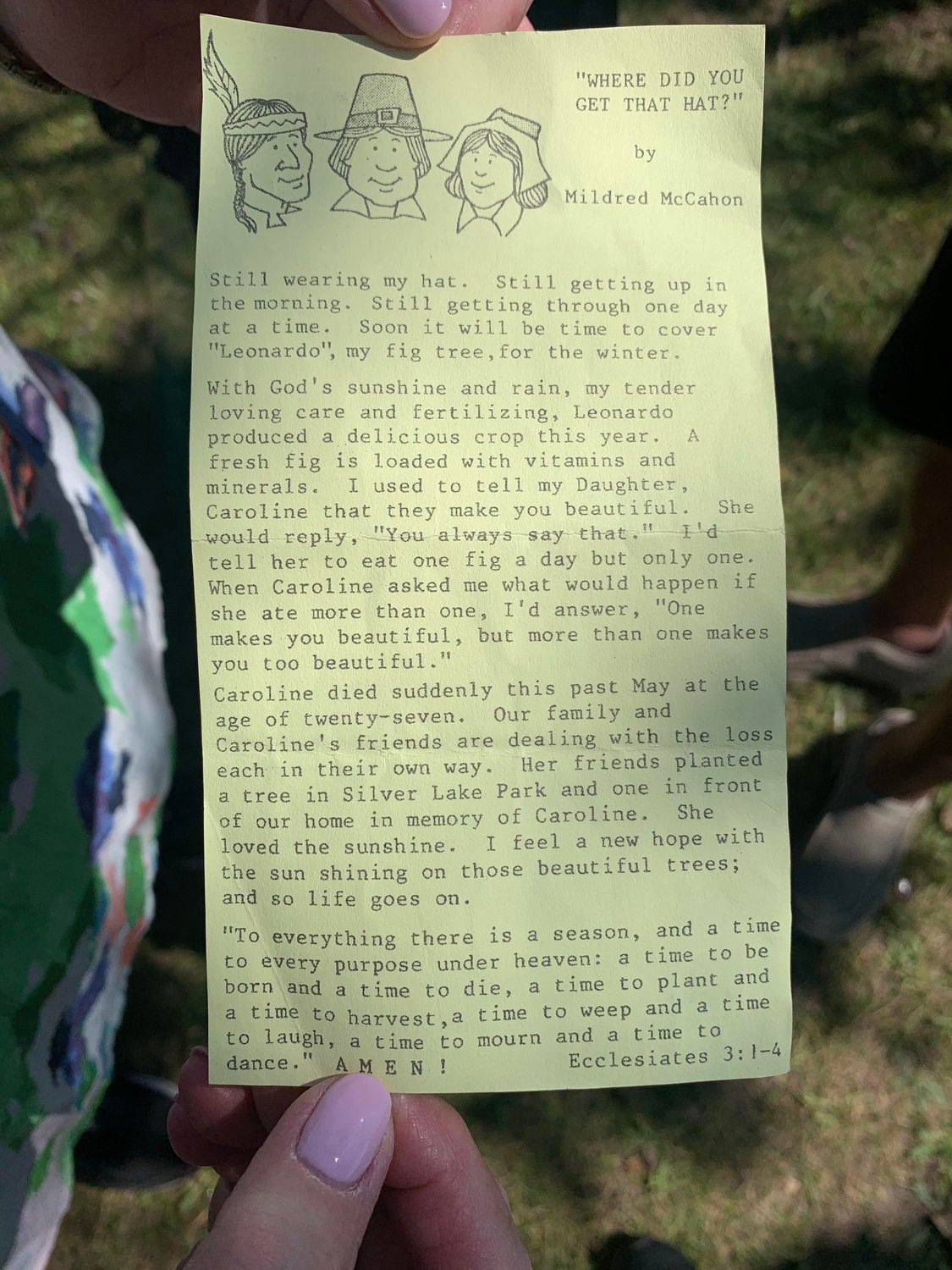 Caroline McCahon’s mother, Mildred, wrote about her a few months after her death.
Photos by Karina Kovac/ Herald photos
Previous Next
By Karina Kovac

A pond in Baldwin’s Silver Lake Park was officially named after Caroline McCahon last Saturday. McCahon was a nature lover who spent her work lunches and other free time with her family in the park she loved. For decades the pond was known informally, but affectionately, as Caroline’s Pond by state officials, local entities working on the Silver Lake Park project, community members and even Google Maps.

McCahon, a graduate of Oceanside High School, died unexpectedly at age 27 in 1990, and her friends in Baldwin and Oceanside came together to plant a Kwanzan cherry tree and install a plaque behind the fish ladder at Caroline’s Pond in her honor. Efforts to do more, by naming the pond after her, were spearheaded by McCahon’s friend Marguerite Grasing Keller, a Baldwin Civic Association member.

Grasing Keller often found that people were confused by the directions she would give them to the pond, which is just north of Wateredge Avenue, when it had no official name. So she approached County Legislator Debra Mulé, who was “All for” the renaming, Grasing Keller said, and the Baldwin Civic Association signed on as the sponsor organization.

Mulé, who lives in Freeport, rides her bike through the park and has advocated for the completion of the Silver Lake Park project — a revitalization of the park — said, “When Marguerite came to me and said, ‘No it’s not officially named that,’ I said, ‘Well, let’s make it happen.’” It took a few months late last year, but after a public hearing hosted by the civic association, the County Legislature voted unanimously to rename the pond. “It’s a nice tribute to someone who meant so much to the community,” Mulé said.

McCahon and Grasing Keller worked together at a credit agency in Rockville Centre, and, as she stood by the pond, Grasing Keller recalled, “At work we would disappear for lunchtime, and we would come here to hang out with the sun for lunch. She loved the sun. She loved this,” she said, gesturing to the air on a sweltering day. One day, she recounted, their boss wasn’t in the office, so they slipped away for lunch and played hooky together the rest of the day.

“It was a privilege to have known her,” Grasing Keller said of McCahon. “I miss her. I miss her every day, and I can hear her voice as if I spoke to her yesterday, and I wonder what life would have been like if she lived.”

McCahon’s brother and sisters, Daniel McCahon, Ellen Plossl and Julie Slotkin, came from New Jersey for the renaming ceremony, to pull the cloth off the new bright green sign. They reminisced about their sister, who, Slotkin said, “felt as comfortable here as in our home, with her red hair and a tan like a comet, and this was her happy place — in the sunshine.”

“She spent her whole life in Oceanside and Baldwin … she loved it here — this is her spot,” Plossl added.

“It’s also a little bittersweet,” Daniel McCahon said, “because it kind of brings us back.”

In her remarks at the ceremony, Slotkin shared something their mother, Mildred, wrote a few months after Caroline died in her Oceanside 1st Presbyterian Church column: “Caroline died suddenly this past May at the age of twenty-seven. Our family and Caroline’s friends are dealing with the loss each in their own way. Her friends planted a tree in Silver Lake Park and one in front of our home in memory of Caroline. She loved the sunshine. I feel a new hope with the sun shining on those beautiful trees; and so life goes on.”