What these two state senators mean for Freeport 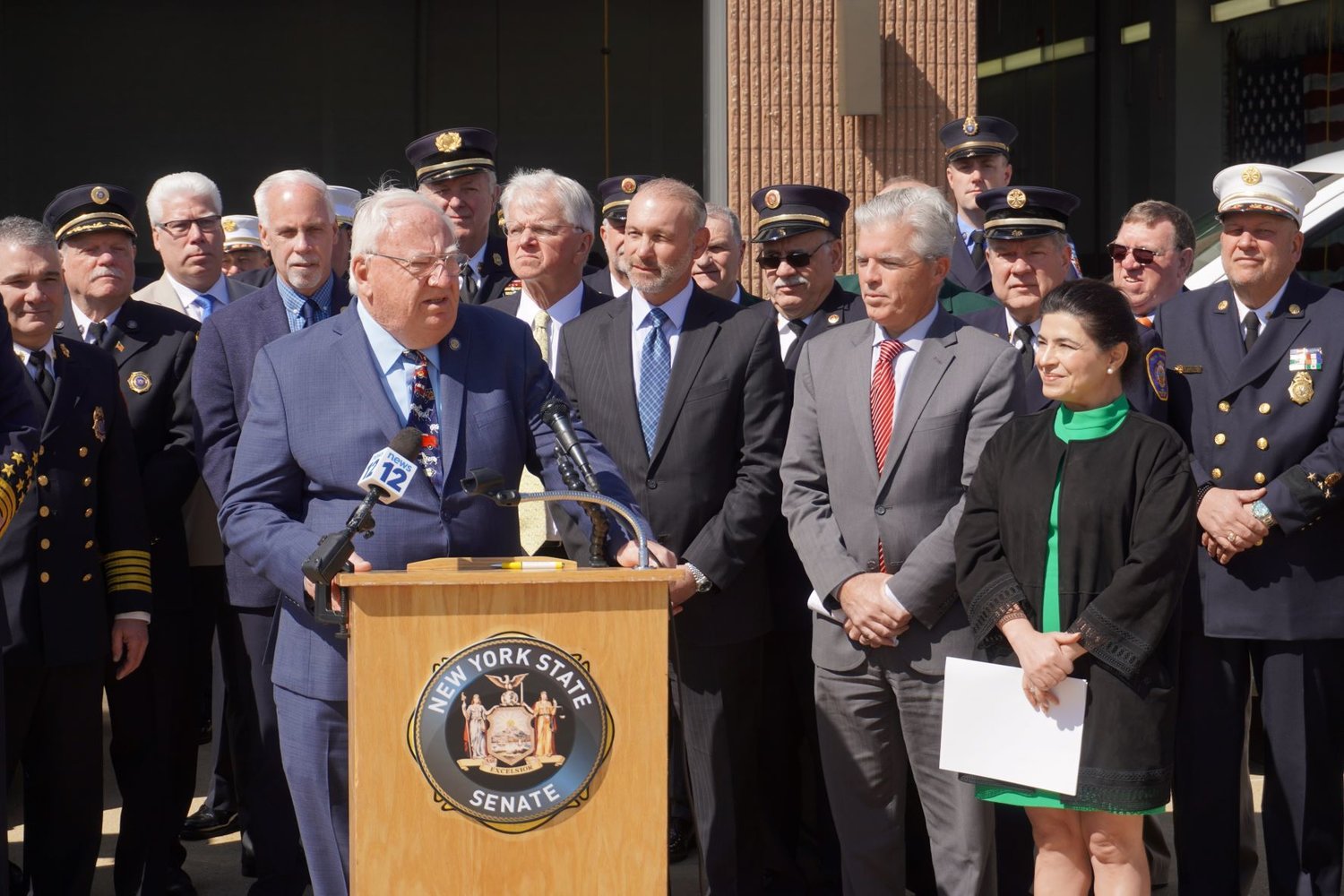 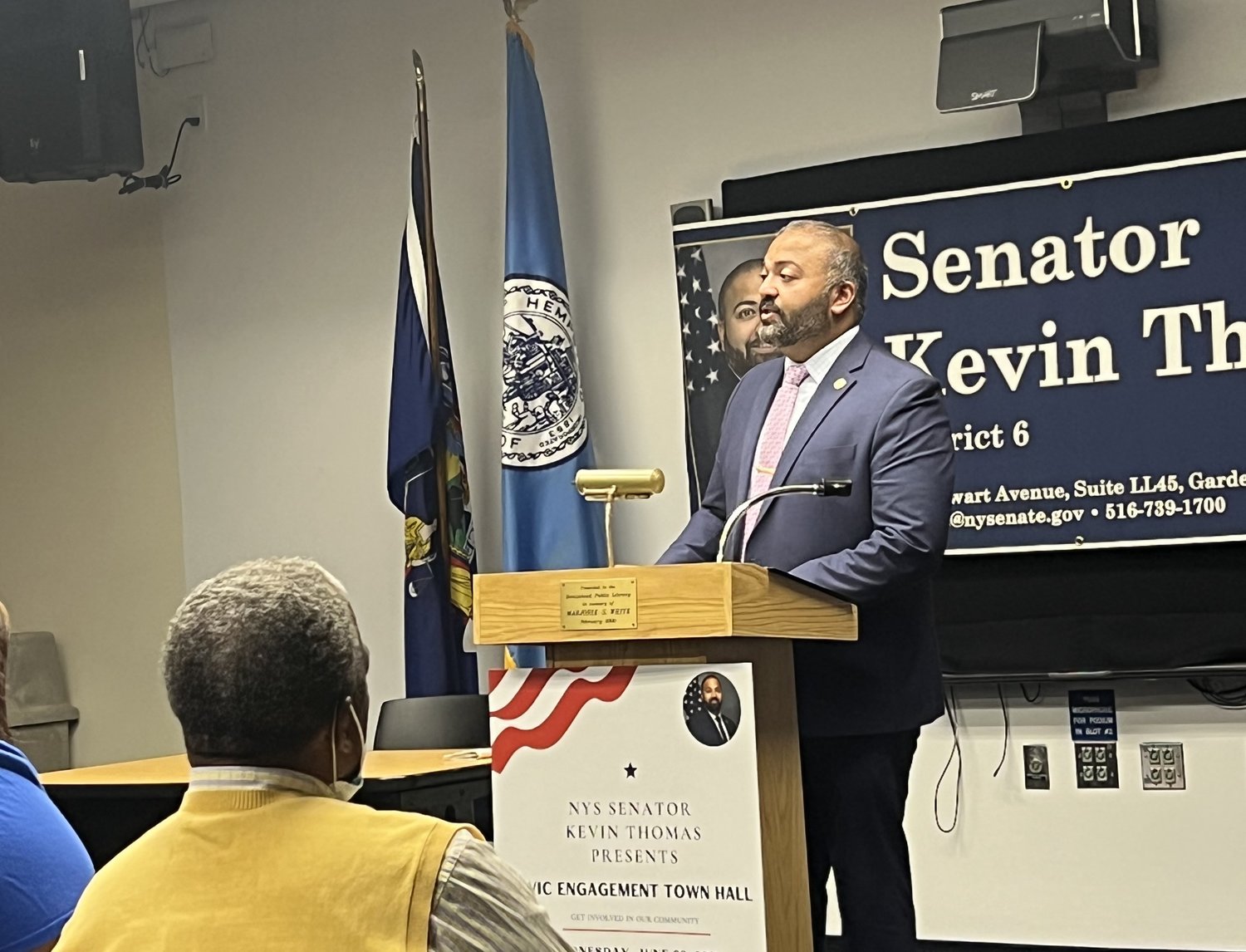 Senator Kevin Thomas held a townhouse meeting on June 22 at Hempstead Public Library to discuss citizens’ concerns and to explain the funding he had helped sponsor for Long Islanders in the new state budget.
Reine Bethany/Herald
Previous Next
By Reine Bethany

Every 10 years, following the federal census, the federal government requires that state election district lines be redrawn to reflect shifts in population size. Redistricting special master Jonathan Cervas was ordered by a federal judge to redraw the New York State Senate map. The new districts will take effect for the 2022 election year.

Since 2012, Freeport has lain within Senate District 8, which has been led by John E. Brooks since his election in 2016. However, the newly drawn lines place Freeport into District 6.

“The new district lines were a shock,” Brooks said in a published statement, “because they removed so many places I had worked so hard to represent. I took stock of what we had accomplished and felt it was the right time to retire rather than seek election in the new district.”

But the tragic mass shooting of 19 children and two schoolteachers in Uvalde, Texas, on May 24 changed his mind.

“After Tuesday’s tragic shooting in Texas,” Brooks’ statement continued, “I heard from so many people encouraging me to stay in this fight.” He decided to run for the new S.D. 5.

Meanwhile, Senator Kevin Thomas’s home in Levittown, which had been in S.D. 6,  now falls into the newly redrawn District 5. He has made so many connections in S.D. 6, however, that he is willing to move his family into its new boundaries and run again to retain his state senatorial seat.

To introduce himself to his new constituents, Thomas came down to Freeport for the 32nd Annual  Nautical Mile Festival on June 4. “I am so happy to be here, to have a partner like Mayor Kennedy here,” he said.

The two senators are both Democrats who are experienced in fostering bipartisanship in the state legislature. Both go to lengths to visit their communities and listen to local needs.

Recently, Senator Brooks hosted a Youth Career Fair (May 7) at Roosevelt High School, gathering academic institutions, unions and other labor-affiliated organizations, and local businesses to speak to youth ages 14 and up about job and career possibilities.

He has supported the Woodward Children’s Center at 201 Merrick Road in Freeport for many years, and regularly comes to Freeport events, in addition to attending to such events in other municipalities in his district.

Brooks’ own experience as a first responder — as a volunteer firefighter in Seaford, Medford and Lindenhurst, as Chairman of the Lont Island Hurricane Symposium Programs, and with eight years under his belt as a medic with the New York Army Reserve National Guard — positioned him to sponsor the EMS Recovery Act in the New York State budget for 2022-2023. This act permits volunteer emergency medical services that partner with volunteer fire departments to bill insurance companies, Medicare, and Medicaid for their emergency services, instead of recovering their costs directly from taxpayers, which imperils their ability to keep operating if taxes cannot cover their operations.

Thomas, too, takes the trouble to visit important occasions in his district, like the June 24 commencement ceremony for Hempstead High School, and hold town hall events like he did on June 22 at the Hempstead Public Library.

An attorney who worked with the nonprofit New York Legal Assistance Group, Thomas, elected in 2018 and reelected in 2020, worked on a data bill entitled the “New York Privacy Act,” which would require companies to allow consumers to obtain the names of all entities with whom their information is shared and give those consumers the power to stop the company from sharing that data if they do not want it distributed.

At the town hall in Hempstead, Thomas read out a long list of new benefits for Long Island that he has helped to sponsor, including $815 million for local school districts (17% more than last year), $16 million to establish childcare centers on each of the SUNY and CUNY campuses to help working students and staff, and $1.5 million for childcare facilitated enrollment for Nassau County.

Thomas and Brooks both actively promote civic engagement, which Thomas defined at the town hall event as “when contributing members like all of you come together to try to make a difference in our communities.”

Thomas also sponsored S8173, which makes it a felony to possess three or more illegal firearms, instead of 10 or more, and also makes the possession of three or more guns while traveling presumptive of intent to sell the guns in New York State. This law deals a major blow to the Iron Pipeline, a nickname for the I-95 corridor, along which illegal guns are ferried from Southern states with less restrictive gun possession laws.