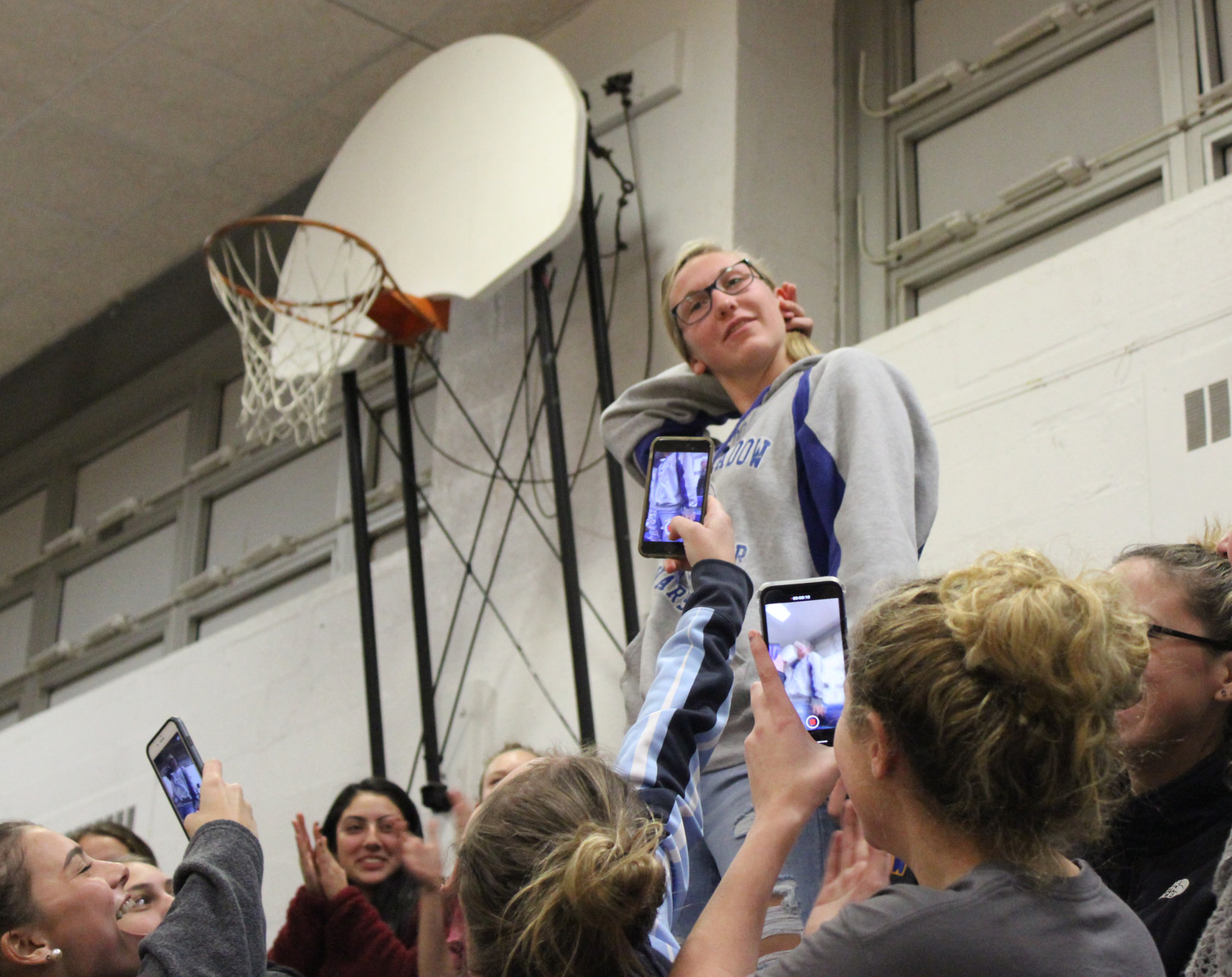 Stephanie Sparkowski believed she was simply cheering on the East Meadow High School boys’ basketball team when the athletic department surprised her with a national honor.
BRIAN STIEGLITZ/HERALD 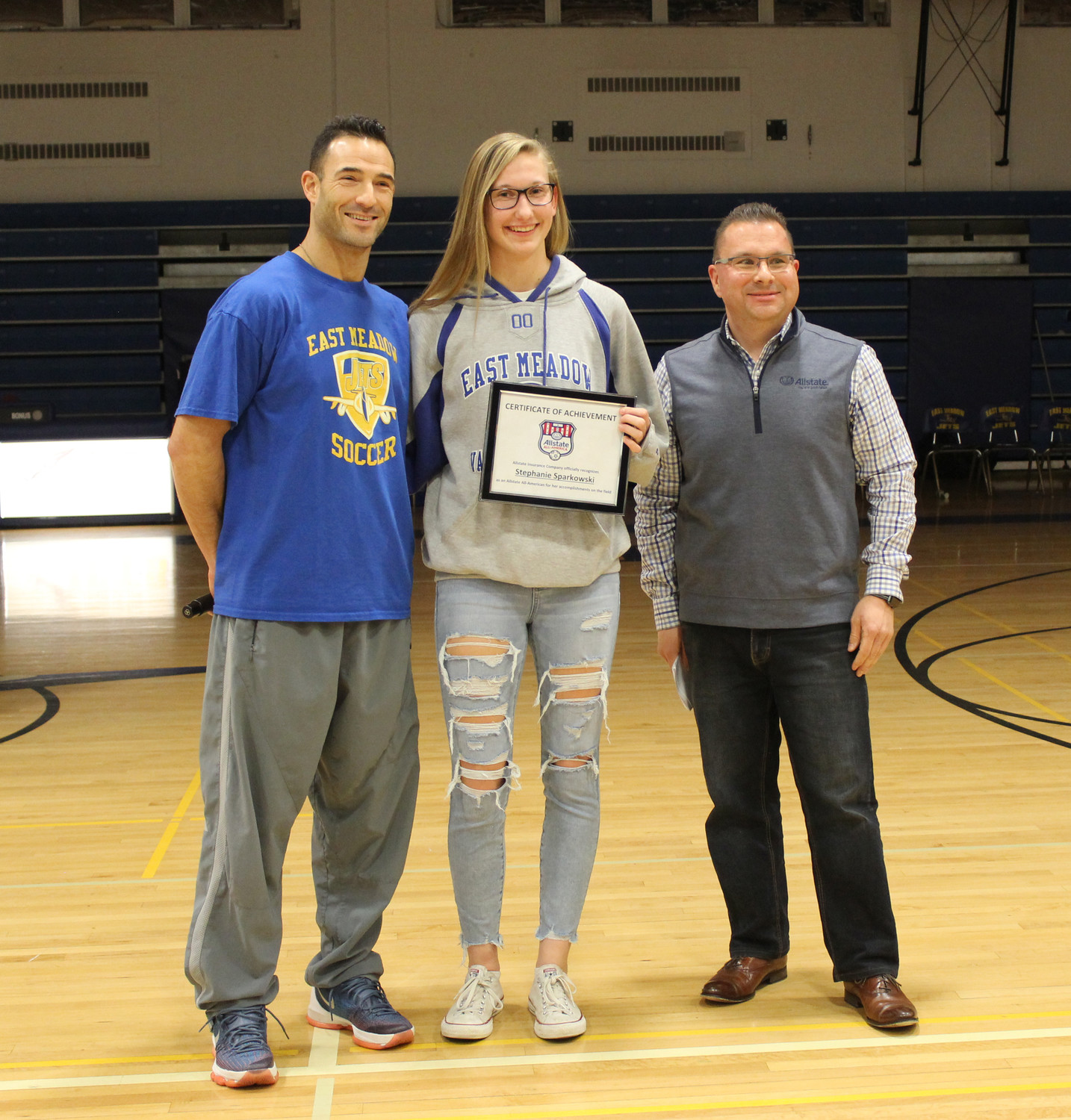 Soccer Coach Adam Hananel, far left, announced that Sparkowski would join the roster for the inaugural Allstate All-America Cup in Orlando, Fla. With them was East Meadow resident and Allstate representative Dan Ratkewitch.
BRIAN STIEGLITZ/HERALD
Previous Next
By Brian Stieglitz

Halftime of Monday night’s boys’ basketball game brought cheers and roars to the East Meadow High School gym, with all eyes on the bleachers when the athletic department surprised a student athlete.

Stephanie Sparkowski believed she was simply cheering on the boys before her soccer coach, Adam Hananel, addressed the crowd and asked her to stand up.

Sparkowski, 16, a junior goalkeeper, pursed her lips and brushed back her hair when Hananel announced that she had been named an Allstate All-American, and would be playing in the insurance giant’s inaugural tournament this summer.

“So many people came together to make this happen for me,” Sparkowski said shortly after the surprise. “I’m still trying to comprehend it all.”

Allstate collaborated with MaxPreps, a sports news outlet run by CBS, to evaluate roughly 800,000 high school soccer players across the country before choosing a roster of 250. Of this group, 40 boys and 40 girls will compete in the Allstate All-America Cup in Orlando, Fla. this summer.

Sparkowski’s teammates were aware of the surprise, and took videos and photos of her reaction when Hananel projected a video message to her from two-time FIFA women’s World Cup champion and Olympic gold medalist Julie Foudy on a giant screen. “Come on and join my team — I need good goalkeepers,” Foudy told Sparkowski, adding, “Go Jets!”

“That message really meant a lot to me,” said Sparkowski, who is a big fan of Foudy’s.

The soccer legend will join Taylor Twellman, Brian McBride and Brandi Chastain as coaches in the tournament, which will be televised on ESPNU and run alongside the 2019 Major League Soccer All Star Game.

This year, the East Meadow High girls’ soccer team was a co-champion, along with Syosset, of Nassau County Class A — a title that the girls had not attained since 1990.

As captain of the team for the second consecutive year, Sparkowski helped lead it to a 12-3-3 record, racking up 91 saves, her coach said. She was named an All-County athlete for the second year in a row, and received an Honorable Mention from News12 Varsity All-Long Island.

“But anyone who knows her knows she’s not just a special talent on the soccer field,” Hananel said, “but an even better person, teammate and friend.” Sparkow-ski also plays on the girls’ basketball team, has a grade point average of 98 and is a member of the social studies and math honor societies.