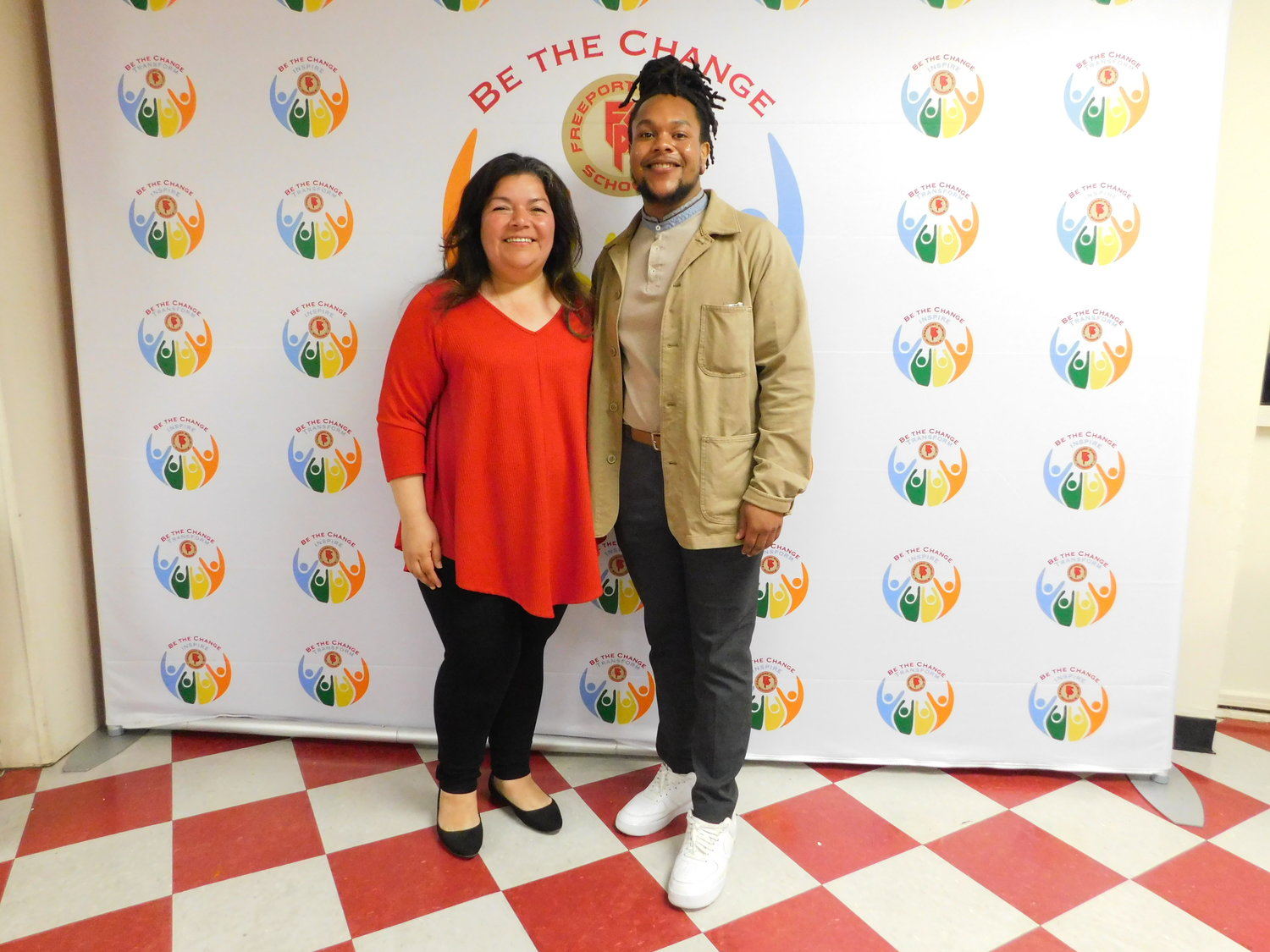 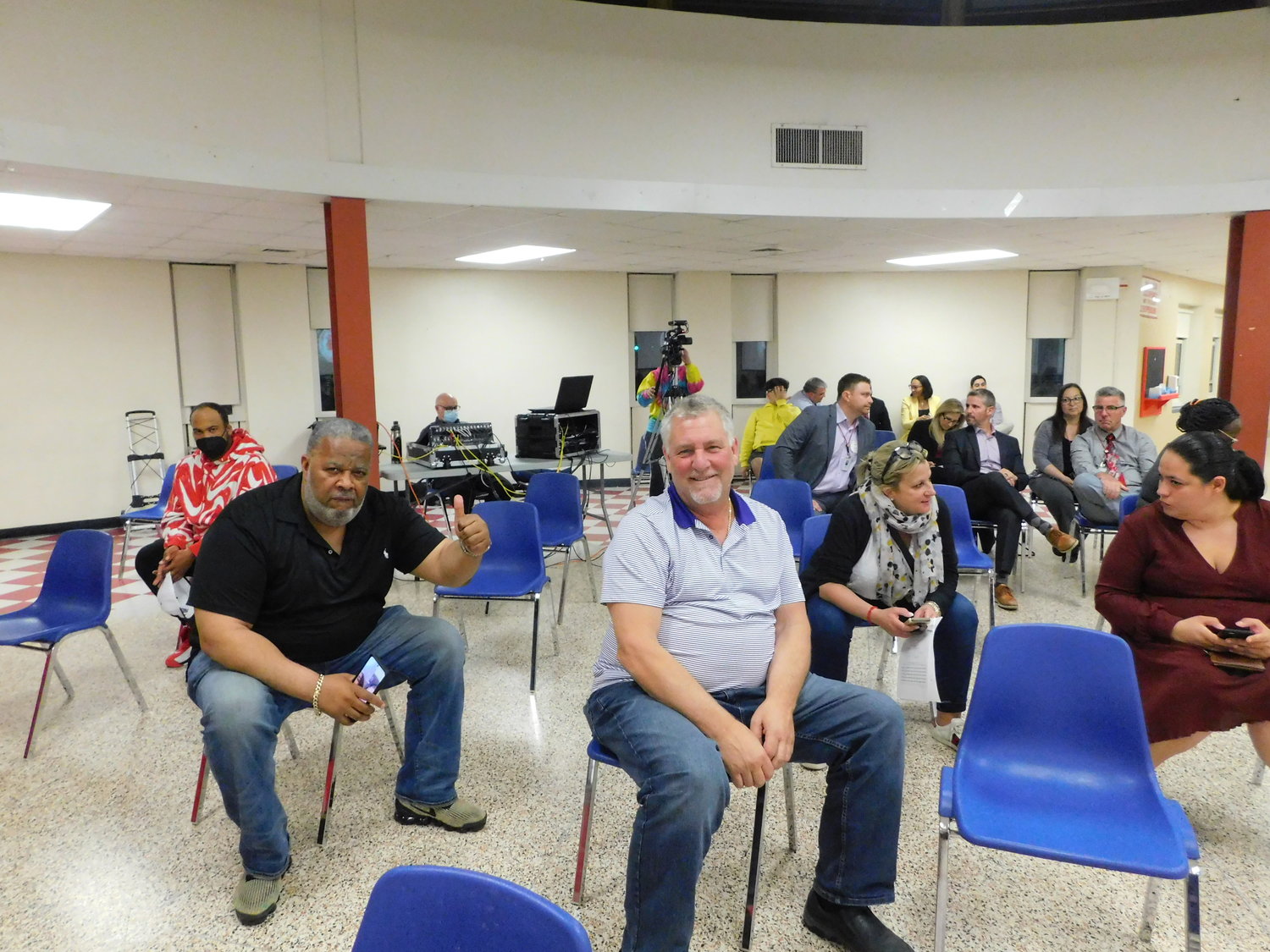 Jacques Butler (thumbs up) and Benjamin Jackson reacted graciously to the news that they had not been elected to the Freeport school board for 2022-2023.
Reine Bethany/Herald
Previous Next
By Reine Bethany

A heated race for two Freeport school board seats ended with board President Maria Jordan-Awalom recapturing her seat, while the seat left vacant by departing board Vice President Gabriela Castillo went to 23-year-old Shuron Jackson.

Meanwhile, the school budget passed handily, with 1,269 voting in favor and 542 opposed. Totaling just under $209.73 million, the spending plan includes increases for instructional technology equipment, professional development, hiring of more guidance staff, and capital improvements. The tax levy, however, will decrease by .12 percent. Federal and state aid will make up the difference.

Proposition 2 also passed, 1,476 to 301. It authorizes the district to spend $2.5 million of its capital reserves for upgrades in school building infrastructure and schoolyards that have been on the drawing board for some time.

The races for the contested school board seats were close. Running mates Jordan-Awalom and Shuron Jackson garnered 910 and 856 votes, respectively. But both Jacques Butler, with 819 votes, and Ben Jackson, with 810, made respectable showings.

Both seats are for three-year terms, starting July 1, 2022, which meant that the stakes were perceived as high, and the turnout was strong.

Voters were still trailing into the gym of Caroline G. Atkinson School, on Seaman Avenue, as the 9 p.m. closing hour approached, including Ladonna Taylor, the recently appointed executive director of Nassau County Youth Services, and her husband, Thomas, the deputy commissioner of the Town of Hempstead Highway Department.

Sam Pardo, one of the six poll inspectors signing people in to vote at Atkinson, has sat at the sign-in table for numerous school board elections. “Probably we’ve had between 1,500 and 2,000 votes throughout the district, which is higher than normal,” Pardo said at 8:50. “People come in saying that they’re here to support the schools, make sure that the kids are taken care of.”

After the polls closed, school board trustees and officials gathered in the Atkinson cafeteria to certify the results. About 70 residents sat on folding chairs. Butler and Ben Jackson chatted quietly on one side of the room. Shuron Jackson took a seat in the back, and got a big hug from Jordan-Awalom before she took her place behind the long table with the other trustees.

There was a burst of applause when the news flashed on a large screen indicating, first, that the budget had passed, and then Proposition 2. When the grid popped up showing Jordan-Awalom and Shuron Jackson in the lead, the clapping was prolonged and punctuated with cheers.

The final tally was affirmed and read out by election Chair Janice Falco. Exceeding Pardo’s prediction, the total of voters for the school board race was 3,402.

Comments from trustees and community members showed that the race was perceived partly as a possible takeover of the school district by the village government. Two school board trustees are village office appointees of Mayor Robert Kennedy. Vilma Lancaster is the village assessor, and Ron Ellerbe is deputy mayor.

Ben Jackson is on the village zoning board. Butler is a commissioner on the board of the Freeport Housing Authority. State laws don’t bar residents from occupying positions in both school and village governments, but to many villagers, it looks suspicious, especially in light of the recent controversy over the Cleveland Avenue athletic field.

The village board and Kennedy have made it clear that they want school athletic teams to use upgraded facilities at Cow Meadow Park for practices so the village can replace the Cleveland field with an Amazon-style distribution warehouse.

“Politics — they do not belong in our schools,” said Jordan-Awalom.

Superintendent of Schools Dr. Kishore Kuncham congratulated Jordan-Awalom and Shuron Jackson on their election, but restricted his comments to saying, “There are so many initiatives and important things that have been included in the budget to support our students, so I’m excited to carry forward all the great work that’s being done into the future.”