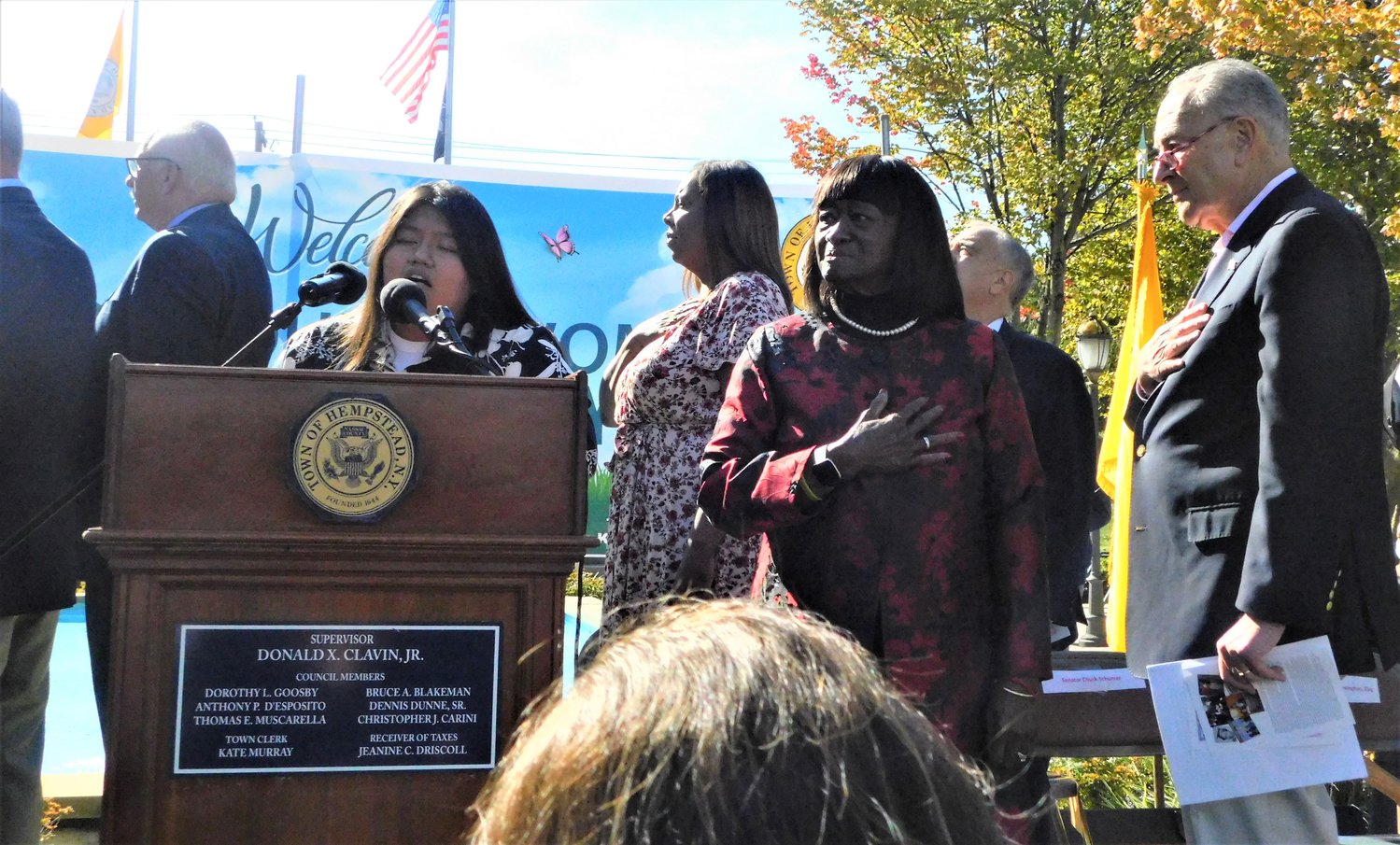 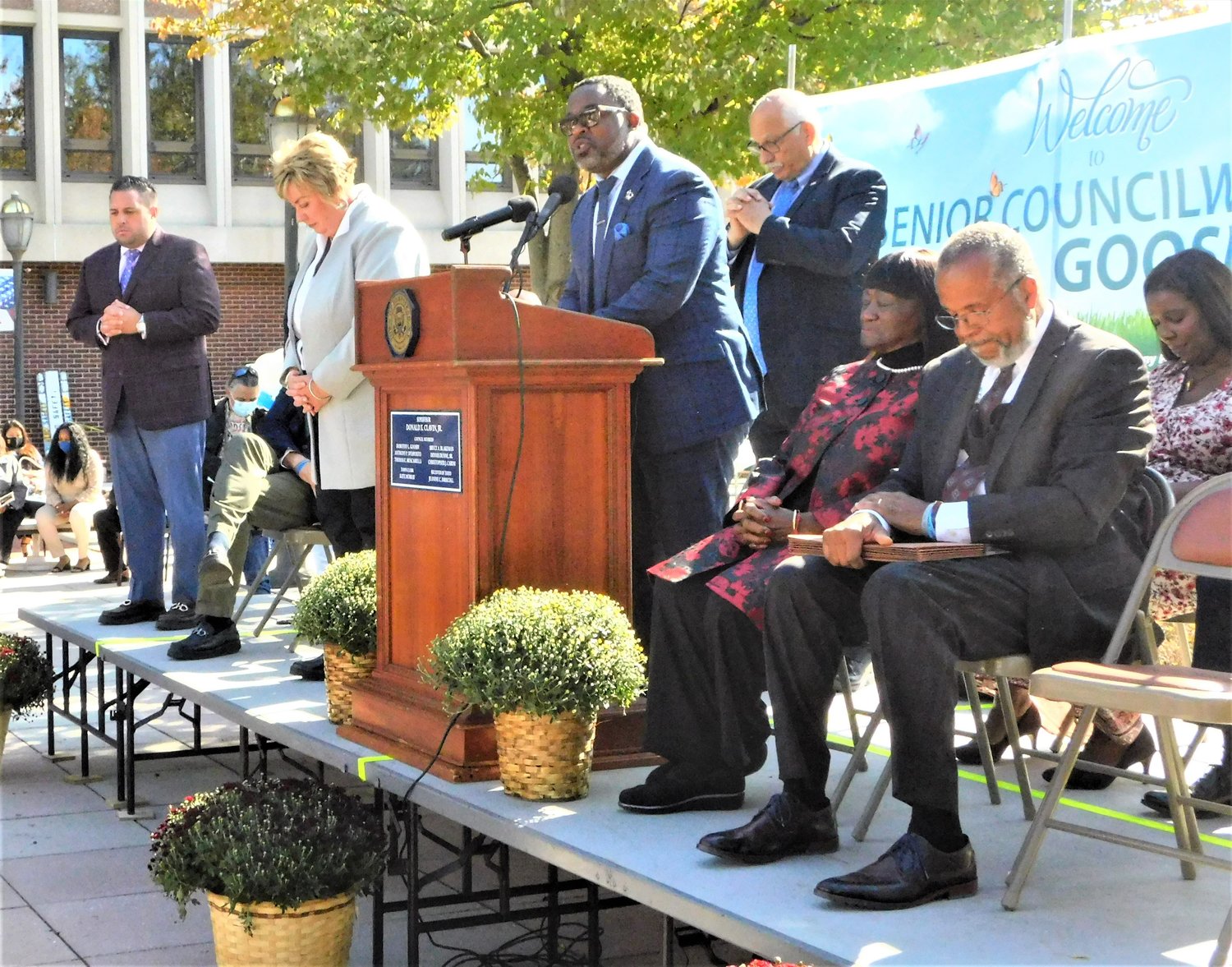 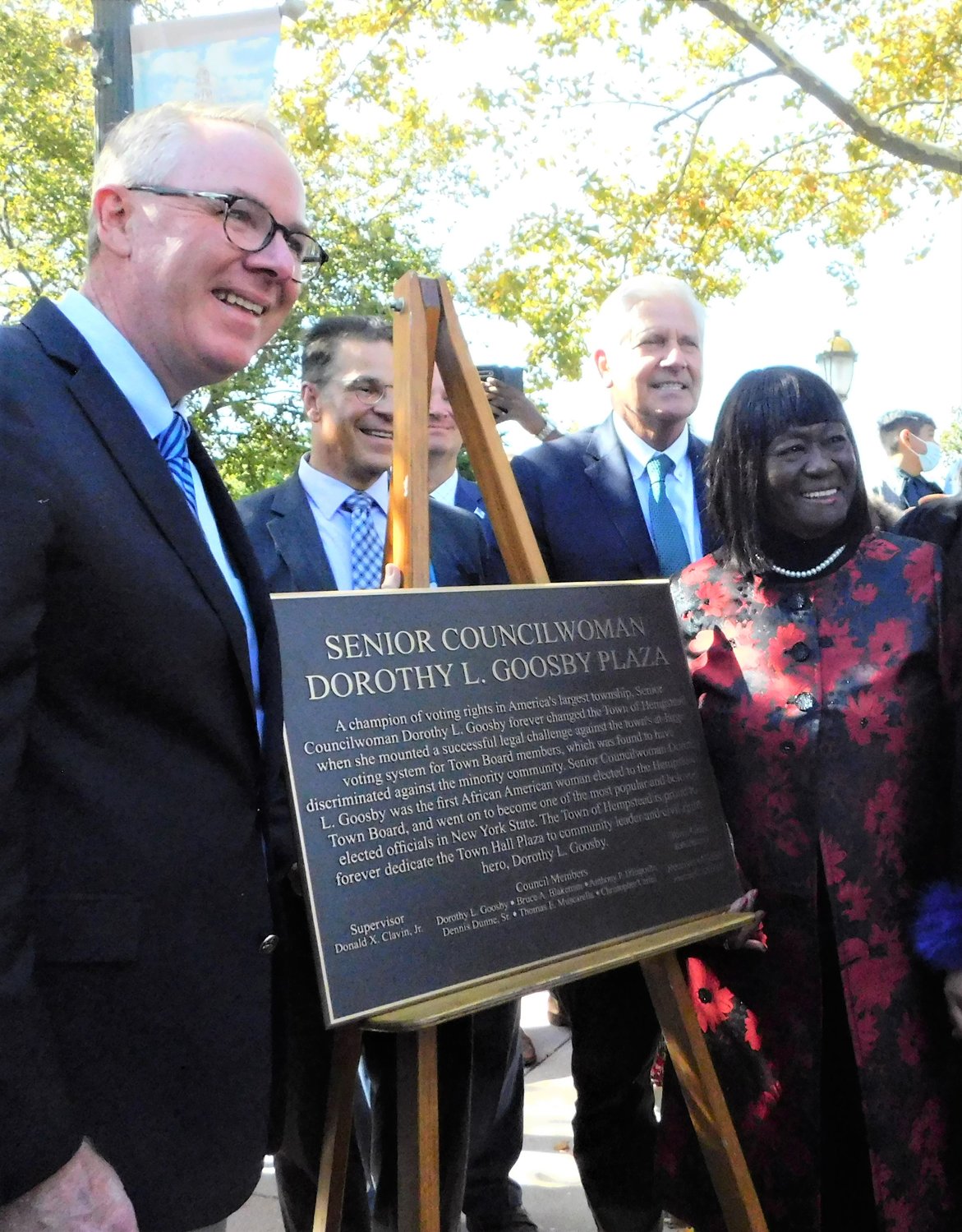 Rosa Parks sat down for justice. Dorothy Goosby stood up for it.”
State Attorney General Letitia James
By Reine Bethany

The diverse crowd, in itself, represented the sea change in the politics of the Town of Hempstead instigated in 1988 by Goosby, her husband Anderson Jay Goosby, Long Island civil rights attorney Frederick K. Brewington, and others. On Aug. 8 of that year, Goosby signed her name as lead plaintiff on a lawsuit filed in federal court, Goosby v. the Town Board of Hempstead.

At that time the majority-white town elected its council members “at large,” meaning that the whole town voted as if it were a single district. Because the town was heavily white, no African American candidate could ever receive enough votes to be elected. The lawsuit charged that the at-large structure violated African Americans’ constitutional right of representation.

After an 11-year battle, Judge John Gleeson of the U.S. Eastern District of New York agreed. He mandated that the town be divided into six single-member districts. The U.S. Supreme Court backed Gleeson’s decision.

Goosby was then elected to represent Councilmanic District 1, which includes parts of Freeport and Baldwin, and the entirety of Roosevelt, Uniondale, Hempstead, and Lakeview. She has been reelected ever since by a majority of up to 93%. For 22 years, she has legislated for infrastructure upgrades, hospitals, schools, and equal opportunities for all races, ethnicities, and ages in the Town of Hempstead. She has lent her supportive presence to countless local events and has led voter registration drives each year at churches, community centers, and high schools.

She is running to retain the District 1 seat this year.

At the Oct. 2 renaming ceremony, tributes were paid to Goosby, now 83, from every level of government.

U.S. Senate Majority Leader Chuck Schumer said, “Dorothy Goosby is an institution in all of America. … She fought for civic engagement among her constituents, [and] she diversified the leadership ranks of the Town departments, to better serve the communities she represented.”

“In 1955 in Montgomery Alabama,” said State Attorney General Letitia James, “Rosa Parks said, no, I will not move to the back of the bus. In 1988, in Hempstead, New York, Dorothy L. Goosby said yes, I will put my name on that lawsuit because I understand the power of the law. Rosa Parks sat down for justice. Dorothy Goosby stood up for it.”

“It was a very chilly reception there in the Town,” said DiNapoli. “It is so significant to me, Dorothy, that you are receiving this honor from the Republicans who control the Town of Hempstead.”

Rev. Dr. Sedgwick Easley, pastor of Union Baptist Church, where Goosby has been a member for decades, delivered the Mid-Ceremony Prayer, thanking God “that she raised her voice … Thank You, O God, for the energy you gave her, that she stood in the gap for many of us.”

“There are over 150 cases in federal courts that cite to the case ‘Goosby versus the Town of Hempstead,’” said Brewington, holding high a sheaf of papers listing victorious lawsuits in 25 states since Gleeson’s 1999 ruling.

Goosby herself spoke with appreciation for her Town Board colleagues.

“They don’t play with me, they know I don’t play, so they work with me,” she said and added jovially, “If they don’t do something right in their district, you better believe somebody from their district will call me. ... I enjoy working with each and every one of them.”

She then unveiled the plaque, which bore the words, “Senior Councilwoman Dorothy L. Goosby Plaza … The Town of Hempstead is privileged to forever dedicate the Town Hall Plaza to community leader and civil rights hero, Dorothy L. Goosby.”