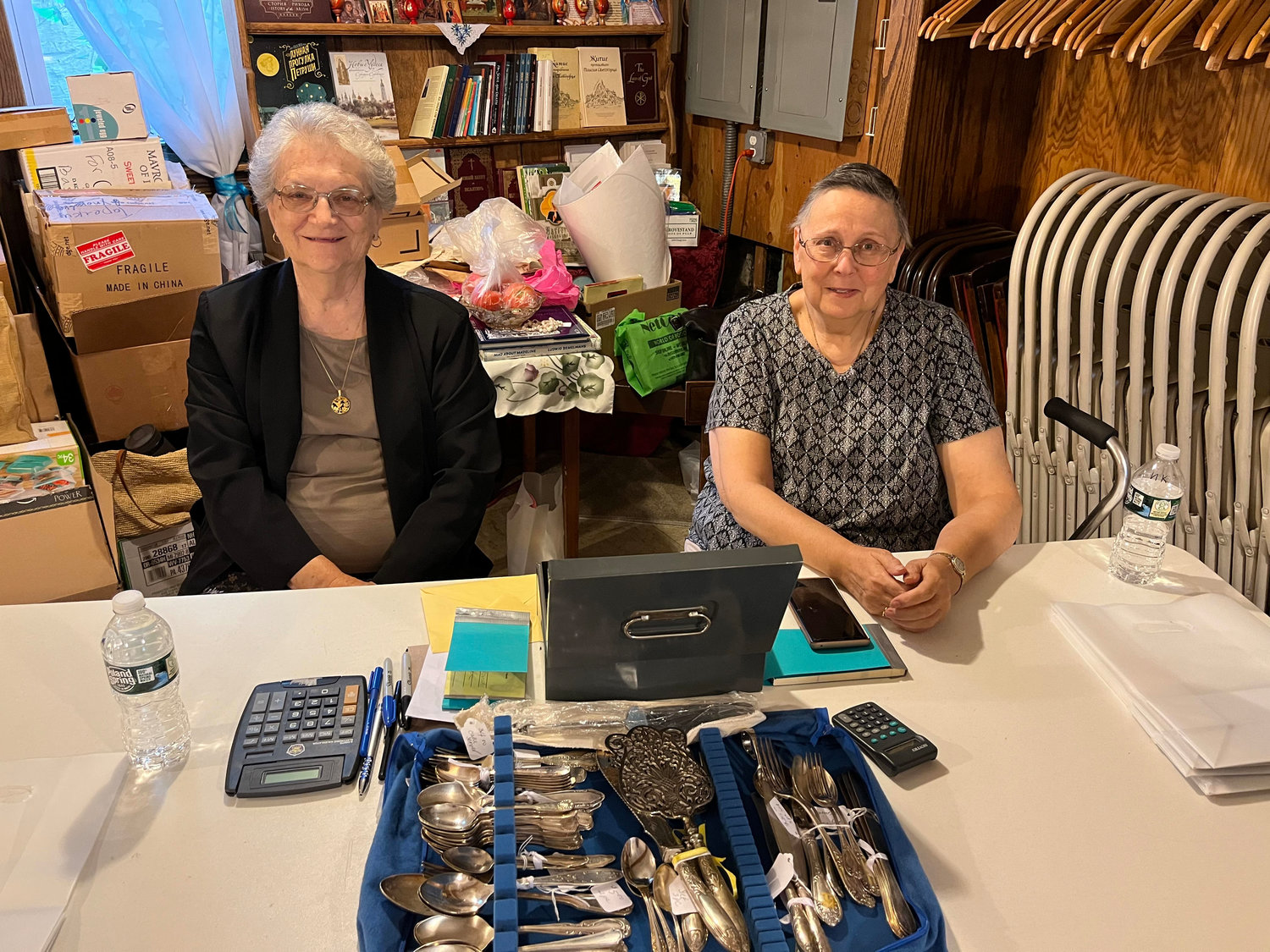 Alla Ryl, left, and Irene Kwartiroff chatted with customers while they manned the cash register at the rummage sale.
Will Sheeline/Herald 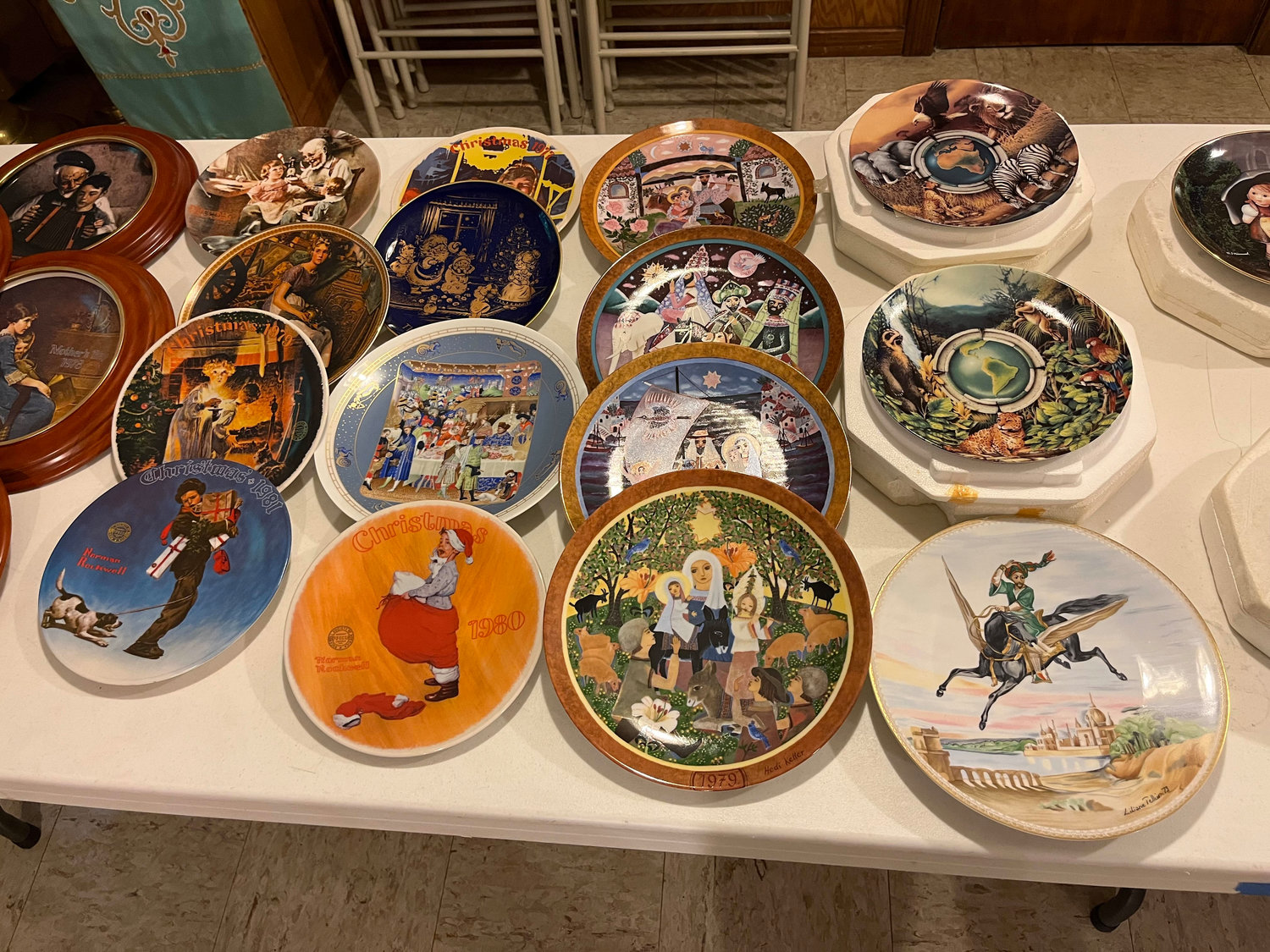 Decorative plates were among the numerous items for sale at the event.
Will Sheeline/Herald
Previous Next
By Will Sheeline

The war in Ukraine has left tens of thousands of men, women and children scattered around the world, forced to flee their homes and leave their lives and possessions behind in their search for safety. Parishioners at Saint Seraphim of Sarov Russian Church, in Sea Cliff, understand better than most the struggle of living in exile, which led the church’s Women’s Committee to hold a rummage sale last Saturday to help raise funds for displaced Ukrainians.
Saint Seraphim has a history of exile. It is the only Orthodox church on Long Island that is part of the archdiocese of the Russian Orthodox Church Outside of Russia, a splinter group of the main Russian Orthodox Church.
ROCOR was established in the early 1920s, following the dissolution of the church in Russia by the Soviet Union. After the main church swore loyalty to the Bolshevik regime, some members living in exile refused to forget the brutality they had witnessed by the Red Army and the Soviet high command, and they defiantly chose to maintain a separate identity from their former co-religionists.
Exiles who had settled in Sea Cliff were among ROCOR’s member, and in 1955 they founded St. Seraphim, which was consecrated in 1959. The church was named after Saint Seraphim of Sarov, a miracle worker who was considered the greatest Russian saint of the 18th century.
Elizabeth Miheyev, of Sea Cliff, the head of the parish’s Women’s Committee, explained that this history of living in exile has always been a central pillar of the church’s culture and mission. According to Miheyev, members’ understanding and shared memories of the hardships of involuntary exile informed their decision to do what they could to help raise money for Ukrainian refugees at the rummage sale.


“Many of us have parents or grandparents who had to flee Russia in the late 1910s and throughout the ’20s,” Miheyev said. “We know what it’s like to be forced out of your home, and we decided we had to do what we could to help our fellow exiles.”
The sale offered parishioners and locals the opportunity to sift through donations that have been made to the church over the years and buy them at reasonable prices. They included traditional silverware sets, cookbooks, decorative plates, paintings, and even a Russian nesting doll, which was one of the first to get snatched up.
Items were arranged by price, which on certain tables was as low as $2 or $3. Although the event was originally planned to begin at 12:45 p.m. last Saturday, shoppers arrived as early as 10 a.m. to get first pick of the many items on sale.
This isn’t the first time that Saint Seraphim has helped the Ukrainian people. Earlier this year, the church invited members to donate food, clothes and other essential items, and sent them to Ukraine.
This time, rather than sending cumbersome items like clothing and food, some of which could be lost or stolen en route, Saint Seraphim planned to send the money it collected to other ROCOR parishes in Europe, which are providing housing, food and aid to displaced Ukrainians.
Father Serafim Gan, the archpriest of the parish for the past 17 years, emphasized the necessity of sending the money directly, so it could be used to help support a wider range of need, covering things like medicine and other aid, which can be challenging to ship.
“This way, we’ll be able to get the funds to the people who really need it,” Gan said. “It’s a bit like cutting out the middleman.”
On hand to help with the rummage sale were many members of the Women’s Committee, which is also referred to as the sisterhood. Its members, some of whom have been Sea Cliff residents since the church was founded, explained that this event was a way for them to help people, the way their own families were helped when they were forced to leave Russia.
“I helped with organizing, and some of the items on sale were ones I’d donated,” said Alla Ryl, a parishioner for 46 years and a former head of the committee. “We’re just trying to help where we can.”
Report an inappropriate comment