Flag unveiled to help vets fight back against suicide 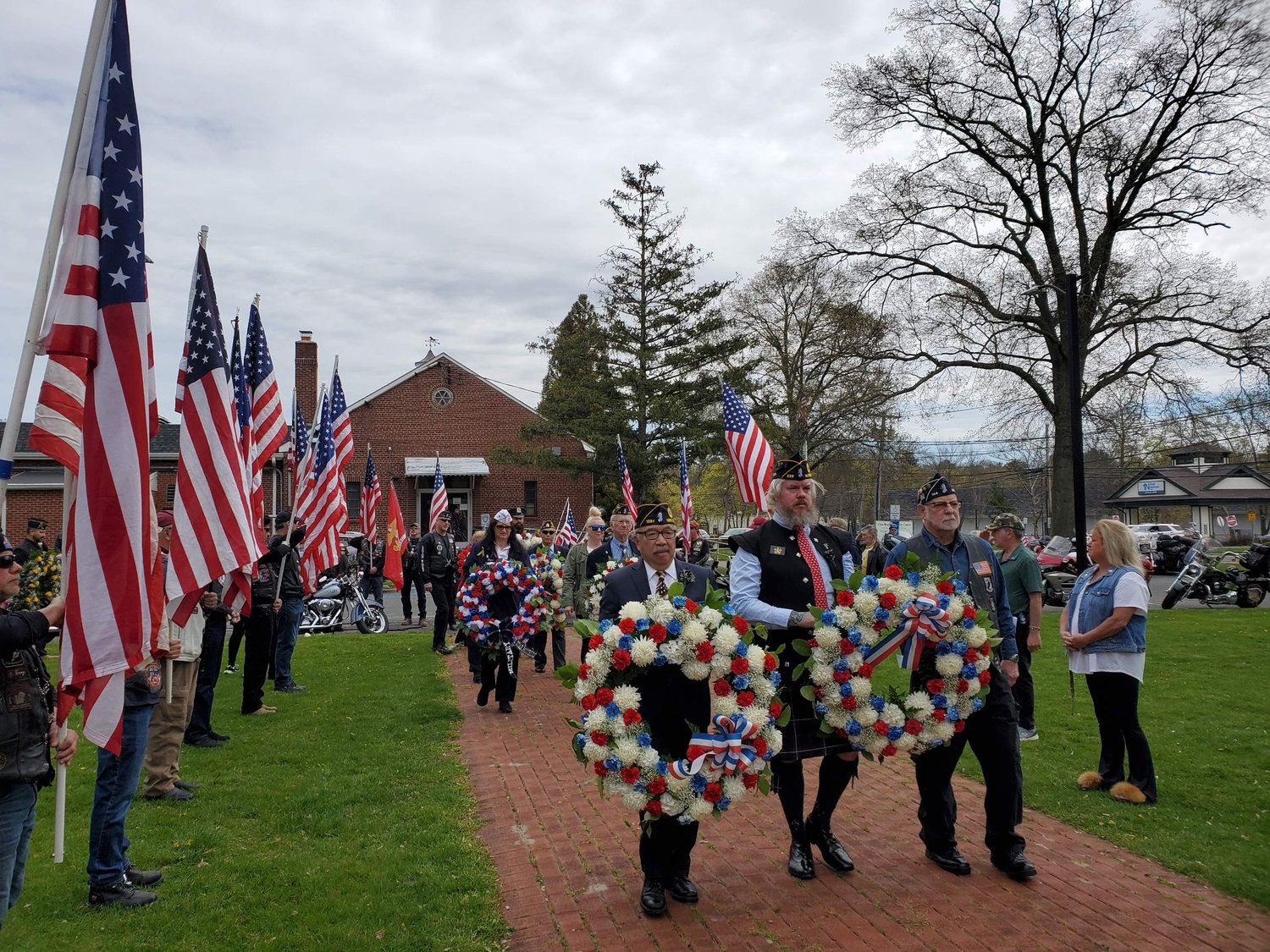 America’s servicemen and women put their lives on the line for the protection of our nation, yet oftentimes it is these men and women who suffer in silence. Several American Legion posts, veterans and charity organizations came together to raise the Suicide Awareness and Remembrance Flag on Saturday at Glenwood Landing American Legion Post 336, to honor veterans and military personnel who have lost their lives to suicide.

The issue of mental health and suicide is one of the largest threats to the lives of military veterans in this country. Every day in the United States, 22 veterans die by suicide, and since 2001 more than 100,000 veterans have been lost.

An important aspect of the remembrance event was the raising of the Suicide Awareness and Remembrance flag in front of the post’s building. The flag was designed in 2019 to honor all veterans and active military personnel who have died from suicide, as well as their families.

Kevin W. Hertell, of Melville, is the founder of Suicide Awareness and Remembrance, a non-profit which seeks to raise awareness for veteran suicide. SAR’s motto is “We Honor. We Remember. We Will End Veteran Suicide Together.”

Hertell, an Air Force veteran, designed the flag after two of his cousins, one a fellow Air Force veteran, died from suicide. During a phone call days later, he explained that suicide is a treatable mental illness, and that the country needs to do everything it can to help its veterans fight this disease.

“Every day, at the end of the day, 22 of my brothers and sisters are gonna be dead,” Hertell said. “So, if we can break the stigma, it’ll stop forcing them to feel ashamed about their mental health. We have to change it to being akin to going to the doctor for any physical injury.”

Hertell and his group, with the support of American Legion Post 336, of which he is a member, said he hopes this won’t be the only flag-raising ceremony held for the SAR flag. By raising community awareness, Hertell has encouraged the introduction of legislation in New York and New Jersey. If this legislation is passed by the state legislatures, the SAR flag will be on its way to be officially recognized by the government, as POW and MIA flags are, and to have September 22 recognized as Veteran’s Suicide Awareness and Remembrance Day.

While the event was held to remember and raise awareness for all veteran suicide victims, it also focused on remembering Lance Corporal Mike Blanco of the Marine Corps., who died from suicide in 2010, at 18 years old.

The event began with a reading from former Post 336’s chaplain Ralph Casey, an Army veteran, and featured speeches from several veterans and their families. There were also musical performances, including a singing of the National Anthem by soloist Chris Lau.

Several days later, Casey shared the organizers hopes. “We just want to make as many people aware as possible,” he said, “and we’re hoping this awareness will bring funding for suicide and suicide prevention, which will eventually lead to elimination.”

Fred Nielsen, a Marine Corps veteran and member of American Legion Post 336, was the organizer for the event. He said the ceremony was one of deep symbolic and emotional importance.

“Even before we take action, we have to first grieve the loss,” Nielsen explained. “We have to acknowledge the veterans who died by suicide and get rid of the stigma. We have to care for them, respect them and their families.”

This included one family in particular at the event, Bruce and Donna Blanco, the parents of LCpl Blanco. The two arrived at the ceremony with an escort of Legion Riders, the American Legion’s associated motorcycle enthusiasts organization. The couple brought a framed photograph of their son with them, and Bruce was one of those who spoke at the ceremony.

Post 336 and the Legion Riders were not the only American Legion groups at the event, however. Members of Manhattan’s Lt. B.R. Kimlau Chinese Memorial Post 1281 were also attended. Several spoke, including Wilem Wong, the keynote speaker, and Judge Randall Eng, the post’s commander.

Eng, a former New York city judge, explained that several of his post members, including Wong, have been active in suicide prevention in the past. When they introduced him to Nielsen and Hertell, he said it seemed like a great thing to do.

“After they made their presentation, it was clear this was a worthy thing to be involved in,” Eng said, speaking three days after the ceremony. “Our veteran comrades are dying 22 a day by suicide. I still remember being shocked by that number.”