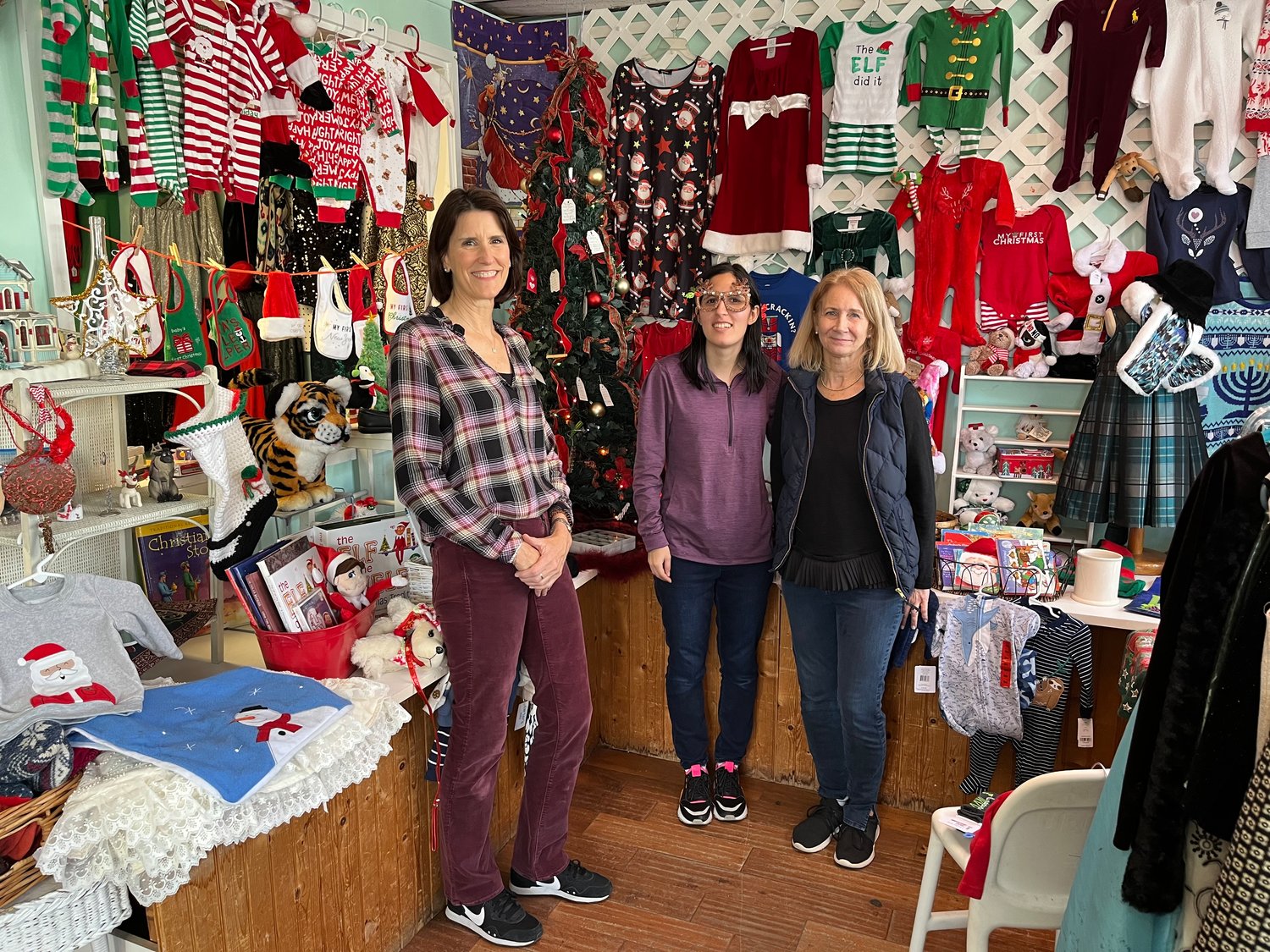 Barbara Costello, right, runs Guardian Angel with the help of volunteers like Susan Sagliocca, center, and Jennifer Marshall. During the holidays, their Giving Tree helps grant children’s wishes.
Will Sheeline/Herald 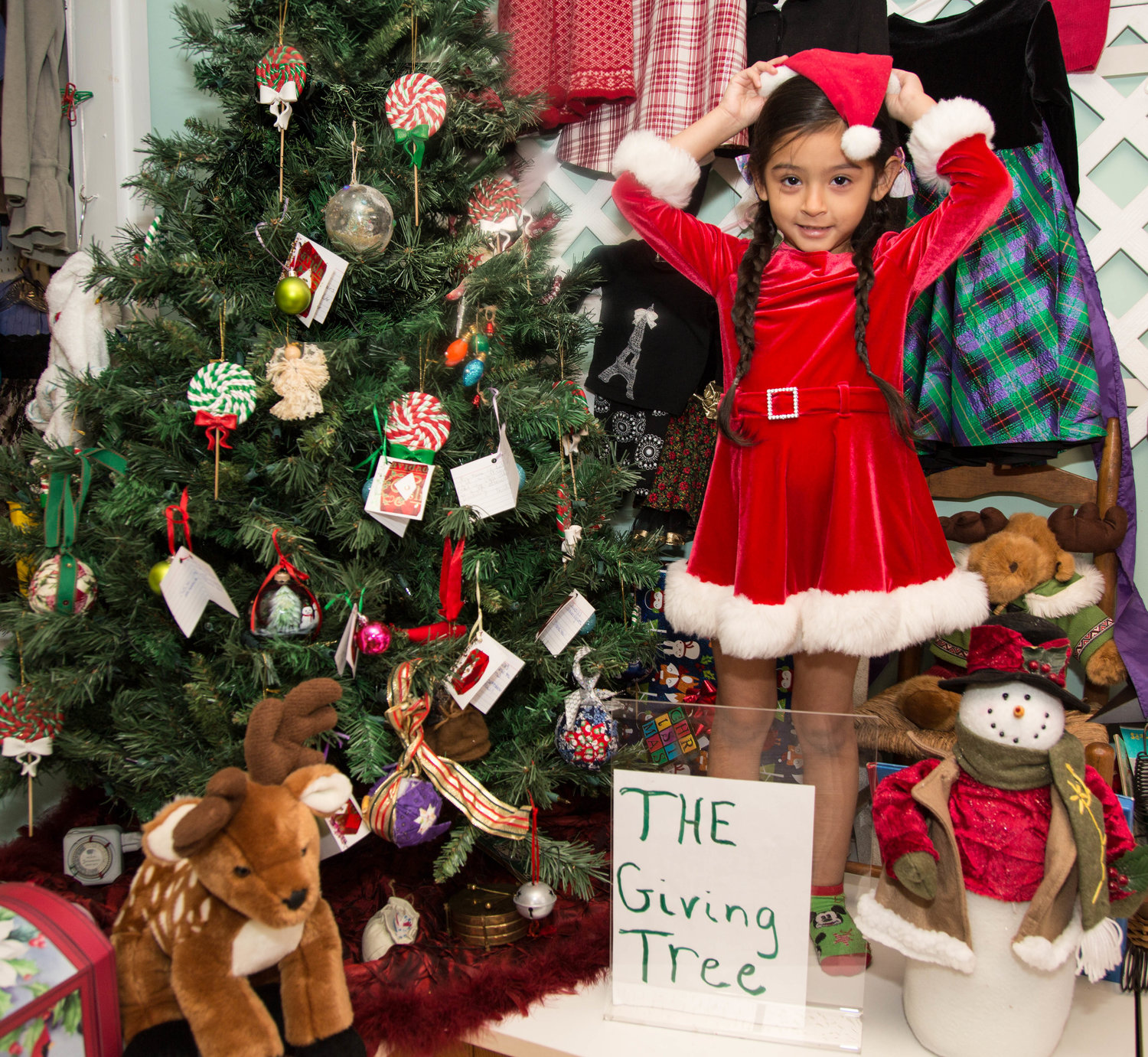 As the holiday season kicks off, millions of American families are beginning to plan which presents to get for their loved ones. The nonprofit Guardian Angel Family Crisis Center, in Sea Cliff, is asking North Shore residents to consider extending their shopping lists to include their neighbors in need.

This marks roughly the 10th year that Guardian Angel has hosted its Giving Tree, a Christmas tree set up in the store with cards written by local children in need listing a small gift that they would like this year. Residents of Sea Cliff, Glen Head, Glen Cove and Glenwood Landing who visit the store are encouraged to take one of the cards and take on the role of Santa Claus for one of the children.

Barbara Costello, director of Guardian Angel, explained that by engaging the community to help their neighbors in need, the nonprofit hopes to not just help residents, but foster a sense of support and camaraderie in the area.

“Guardian Angel’s very much about raising awareness of the needs of our community,” Costello said. “The really beautiful thing is that we have recipients who have been taking on the same kids year after year, to the point where they basically become part of each other’s families in a way.”

Guardian Angel began 13 years ago, with the vision of raising awareness for the needs of community members and reaching out to high-risk individuals. It works with primarily single mothers and their children, who come from a wide range of backgrounds, but all of whom are facing financial difficulties.

Throughout the year, the organization provides a wide range of services for community members, from clothing and toy donations to English language classes for local students who speak it as a second language. Guardian Angel also sponsors a school in Honduras and provides emergency support for women in crisis due to homelessness.

Costello, a resident of Glen Head for the last 38 years, emphasized the fact that while giving the gifts is important, Guardian Angel also works very hard to reduce the stigma of going to a nonprofit for help. To some people, the thought of acknowledging their financial or other struggles can feel embarrassing or shameful. By promoting a friendly, caring, community-oriented atmosphere, she and her fellow volunteers emphasize that they’re not getting “handouts,” but instead showing people how much their neighbors support and care for them.

Jennifer Marshall, one of the volunteers at Guardian Angel, explained the importance the gifts had to families in need, not just as toys or clothes, but as symbols of the holiday spirit of giving back and the community spirit of caring for neighbors.

“It’s such a good opportunity for the community to get essential items at unbelievable prices,” Marshall said, “and also shows us how we can service the people in the community who are really in need.”

On Christmas morning, Santa Claus himself makes a special stop at the store to the delight of the children. For many mothers, such as Maria of Glen Cove, this event really brings the magic of Christmas alive for the children.

“The Giving Tree at the Guardian Angel Family Store makes my boys so happy at Christmas. First they visit Santa in the store and have a picture with him, then Santa gives them the presents,” she said. “They are so excited Christmas morning when they open the present and it is what they wanted.”

For anyone interested in donating, receiving aid, or learning more, Guardian Angel’s Family Store, the headquarters of the nonprofit organization, is at 239 Glen Cove Ave. in Sea Cliff. The store can be reached at (516) 277-1068, and are open Monday, Wednesday, Friday and Saturday from 10 a.m. to 3 p.m.