Golfing for the village continues to be all the rage 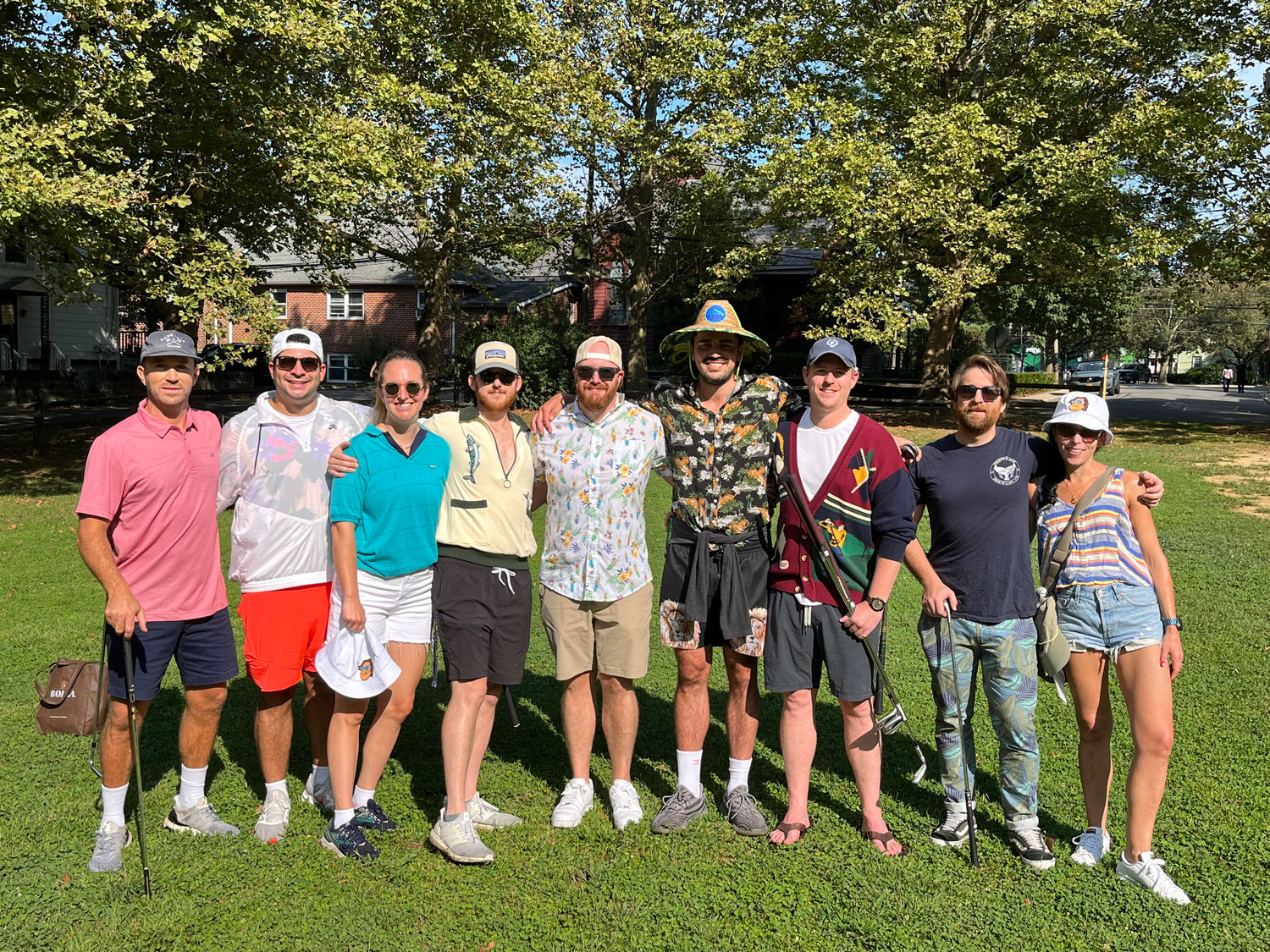 Michael Lennon, fourth from right, and his friends took to the course to play some golf and keep up the event he started some 14 years ago.
Will Sheeline/Herald 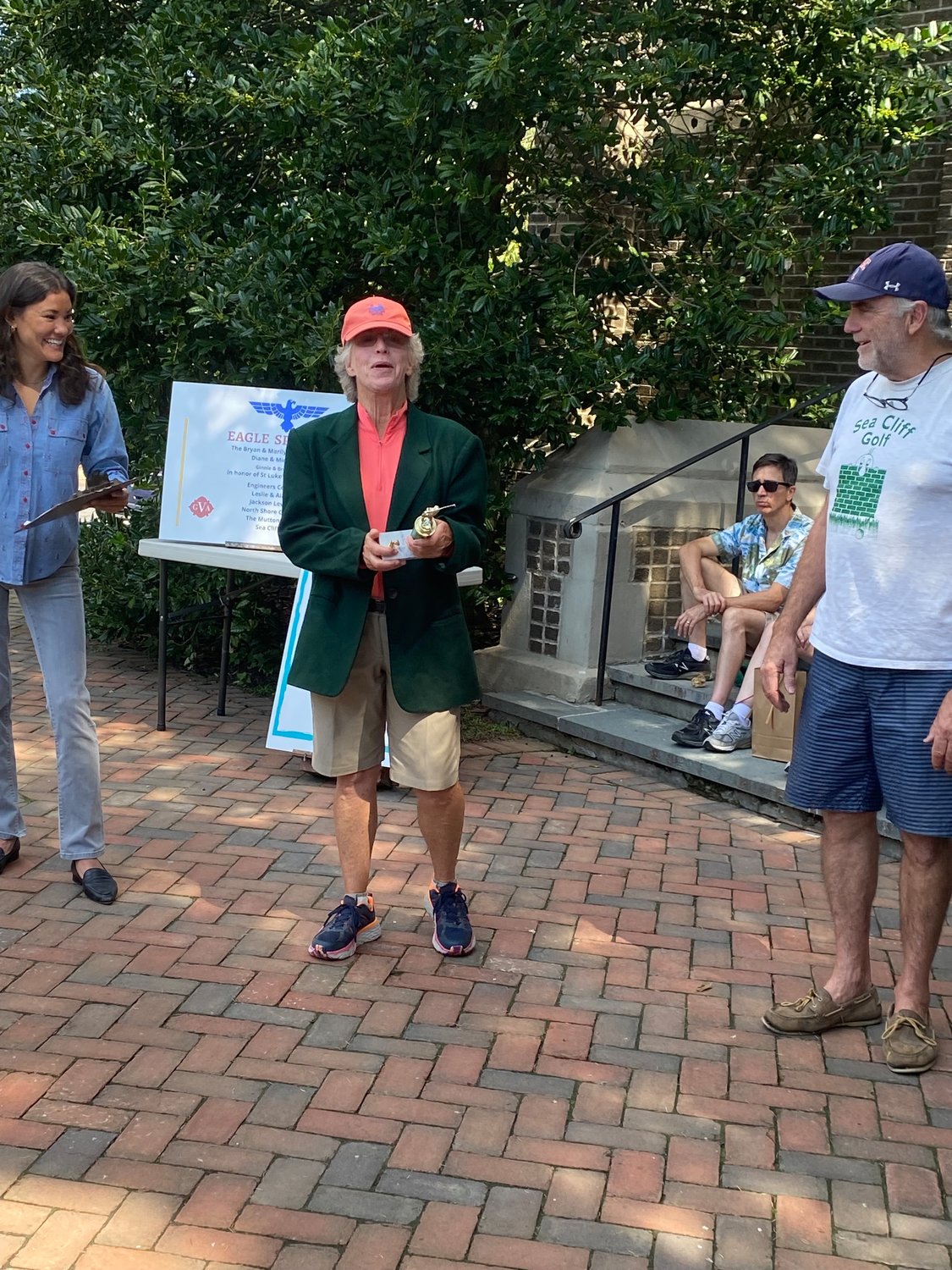 James O’Brien was able to claim one of the coveted green jackets for his performance in the tournament.
Courtesy Gwynne Lennon
Previous Next
By Will Sheeline

Sea Cliff residents and golf enthusiasts made the most of the early fall weekend by participating in the annual Golfing Through Sea Cliff event. Organized by the Good of the Village Association, this local golf outing has been a Sea Cliff staple for over a decade.
The Golfing through Sea Cliff Tournament takes golfers on a 19-hole circuit throughout the village, mostly played in private yards and local parks. Golfers were able to enjoy the beauty of Sea Cliff’s green spaces while also getting in some old fashioned fun.
Gwynne Lennon, the Good of the Village Association’s organizer for the event, explained that her son Michael, a Sea Cliff resident and college student at the time, sparked the concept back in 2008. Her son had read an article about an urban golf program which involved golfing across rooftops as a way to promote community building.
While golfing across Sea Cliff’s rooftops wasn’t a viable option, he still saw that the idea would work great in the village, and knew it was the perfect opportunity to help raise money for the Sea Cliff Village Library. Although Michael and his friends were asked to stop using real balls by their parents, they ended up running the event for the next several years.
Michael gave up running Golfing through Sea Cliff after a few years, before his dad and one of his fellow golfer’s fathers picked up running for a little while. Although neither Michael Lennon runs the event today, in 2015 the torch was passed to Gwynne and the Good of the Village Association.


“It’s meant to be a gallery tour, where you follow the golfers you want to watch, but we’re also promoting it as a walking opportunity to get to enjoy some of Sea Cliff’s hidden places,” Lennon explained. “It’s really to bring people together to enjoy Sea Cliff.”
The Good of the Village Association is a group that has been around since the late 1800s, and seeks to improve the quality of life for Sea Cliff residents. Through events such as this the group raises money that is contributed to various organization and entities throughout the village, such as the Sea Cliff Village Library or Village Museum.
Although they have no plans for the funds as of yet, according to association member Renee Swanson there is always some project which will come up.
“We do things for exactly what our name is — the good of the village,” Swanson explained. “So that’s our mission, to support the things that are going on in Sea Cliff.”
Since the event’s change in management there have been some changes throughout the years, particularly with regards to the size of “the course” itself. At one point there were 26 holes in the circuit, as Lennon’s husband Mike wanted to give golfers more of a challenge by having them play in every single park in Sea Cliff, an impressive feat that unfortunately left many golfers a little worn out.
Nowadays the 19-hole course is a mixture of parks and private gardens and home, spread out throughout the one-square mile village, including a hole-in-one challenge. Although some holes change as owners sell their properties, make repairs and changes to their property or simply decide they don’t want to help host the event anymore, by and large the course has remained the same for the last seven years.
This has encouraged golfers of all ages and skill ranges to hit the course over the years, although there are always some who play at a more competitive level than others. Jesse Gertsen and his son Jonah decided to play in the tournament at the last minute with their friend Markus Savwoir.
“We weren’t even going to do it until we ran into Markus last night at Gallagher’s,” Gertsen explained. “I’m glad we did, because we’re having a lot of fun with it.”
Despite the fact that Michael Lennon is no longer running the event, he and his friends still did their part to golf through Sea Cliff. One of his friends, Matthew DiVincenzo, said it was great to be able to spend the day relaxing and playing casual golf with friends.
“We like to play golf, even though none of us are very good,” he said. “It’s a great opportunity to spend some time outside and just have a good time.”
The winners of the event received a coveted green jacket, modeled after those given out at the Masters Tournament held at Augusta National Golf Club every year. This year’s winners were Chris Michelle for men and Joan Hochberg in the women’s category, while runners up were James O’Brien and Julia Price.
Report an inappropriate comment