Sea Cliff gets a visit not from Santa, but from Scrooge 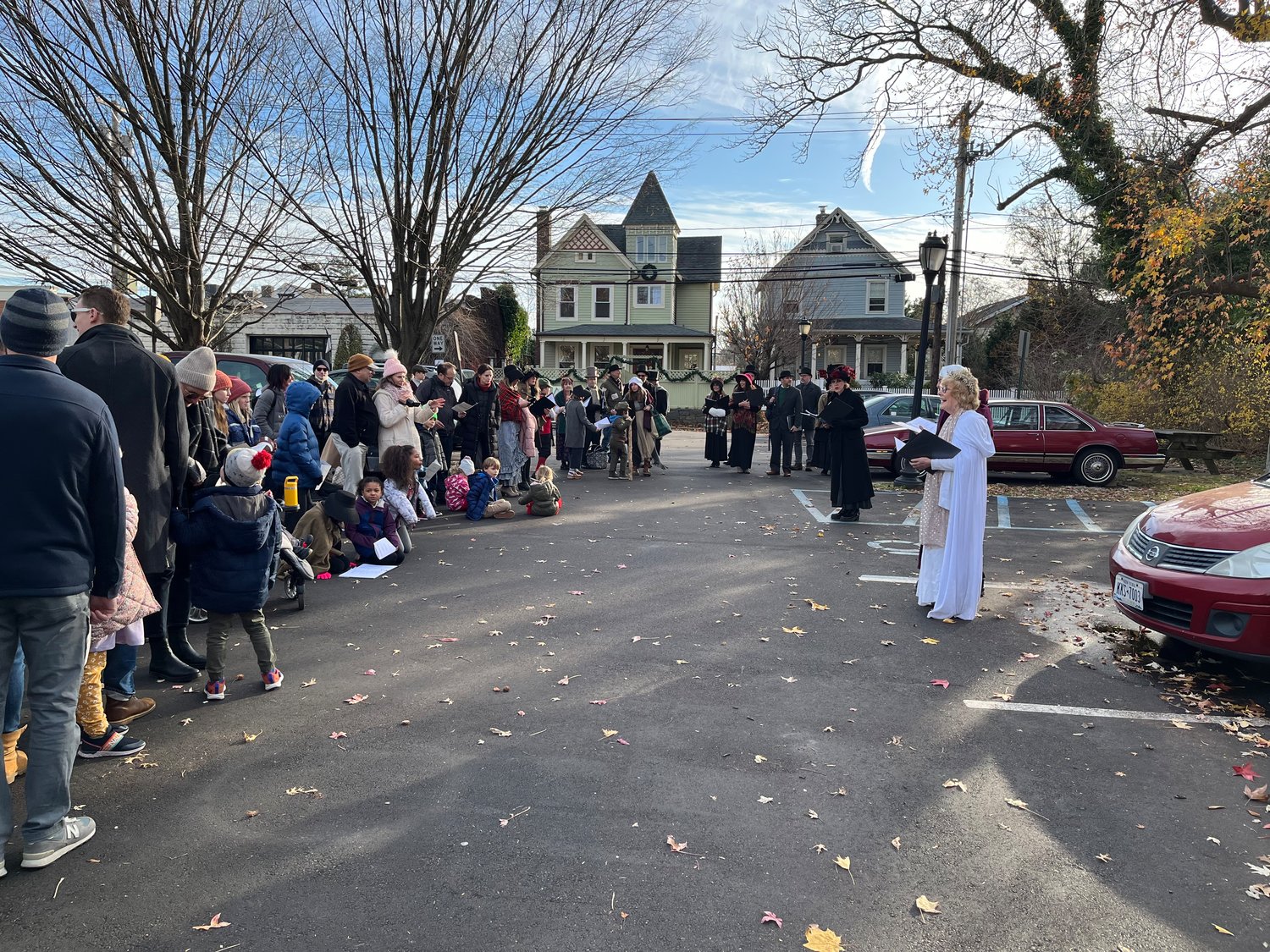 Through the power of imagination, a parking lot became Scrooge’s childhood boarding school during ‘A Christmas Carol,’ performed by members of the Sea Cliff Civic Association.
Will Sheeline/Herald 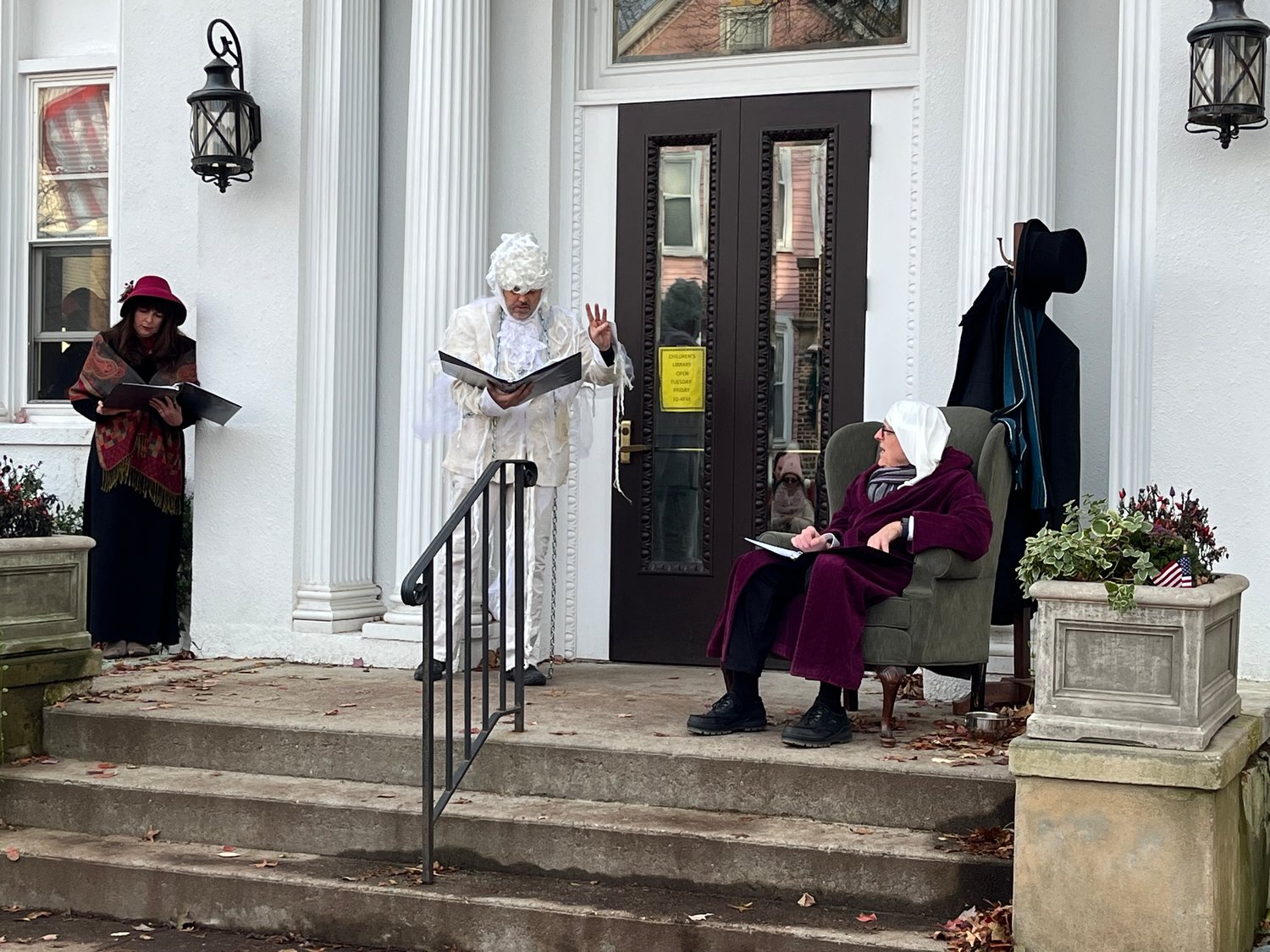 Scrooge, played by Dan DiPietro, received a visit from the ghost of his old business partner Jacob Marley, played by Fred Stroppel.
Will Sheeline/Herald 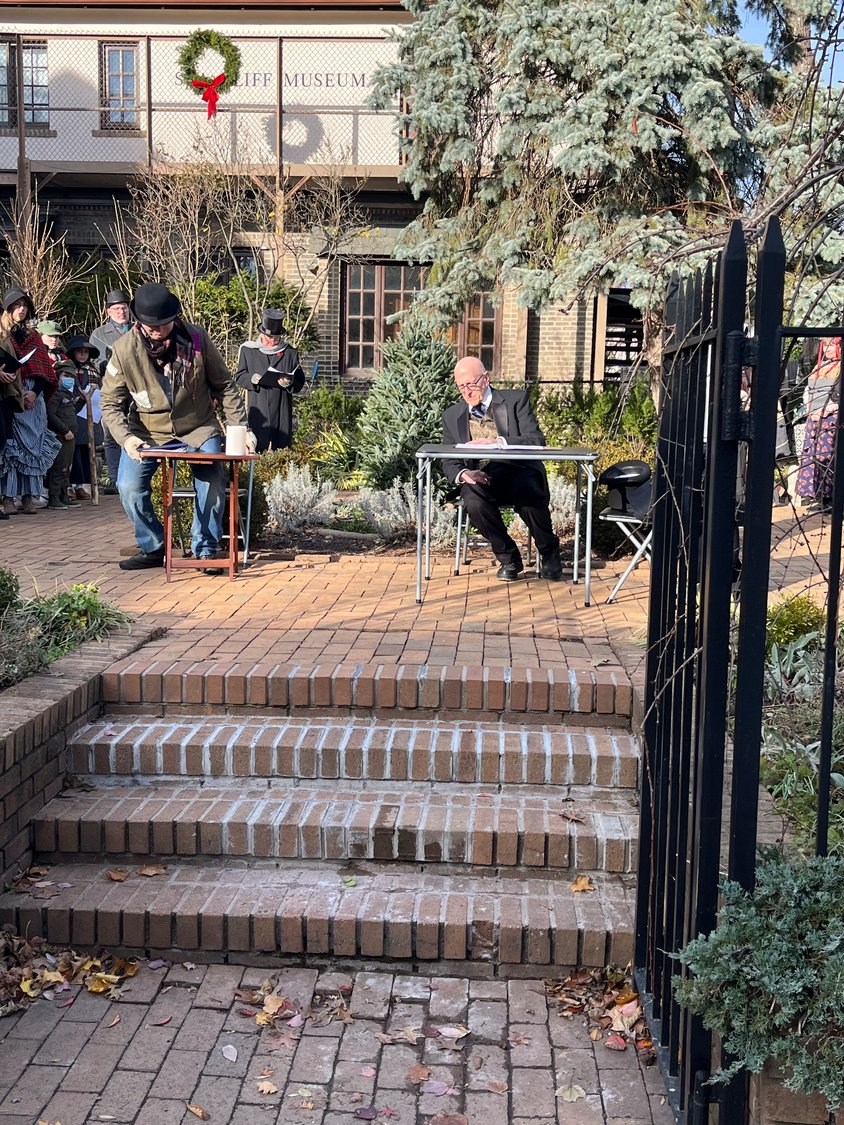 The cast performed the second “chapter” of the play in the garden by Sea Cliff Village Hall.
Will Sheeline/Herald
Previous Next
By Will Sheeline

Sea Cliff residents of all ages walked through the village on Sunday, following behind a cavalcade of Victorian characters from the Sea Cliff Civic Association’s production of “A Christmas Carol.” by Charles Dickens. And despite old Ebenezer’s best efforts, the crowd of roughly 70 people got into the holiday spirit as they took part in the village’s seventh annual “Scrooge Stroll.”

Started by the civic association in 2015, the idea for the Scrooge Stroll came about when two of its members came back from vacation and raved about Dickens-themed Christmas events that they had enjoyed in other municipalities in the Northeast. Association member Dan DiPietro recalled that they came up with the idea to do a walking play throughout Sea Cliff, like New York’s “Shakespeare in the Park.”

“We all thought that’s it’s such a beautiful village that we should take advantage of that and go to different houses and buildings,” DiPietro said. “It really just evolved from some people seeing a Dickens reenactment and saying, ‘Why don’t we bring that to Sea Cliff.’”

The cast is made up of thespian-inclined citizens, with the part of Scrooge being played by DiPietro himself. The actors, all of whom were dressed in period-appropriate clothing, told the classic story of the old man who is so greedy that he nearly loses sight of the true meaning of Christmas.

The walk itself covered numerous landmarks, buildings and even front porches, starting and ending outside of the Sea Cliff Children’s Library. Parents and their children began queuing up for the show early, such as Josh Steinberg and his twin sons, Luca and William, all of whom were excited to see the show.

“It’s our first time seeing it since these guys were born,” Steinberg explained. “They really can’t wait.”

Fred Stroppel, the director of the performance, explained that although the actors held their scripts, they did a tremendous job of bringing their characters to life. Although many of the actors have become very comfortable with their roles after performing them for over almost a decade, he said it can be particularly hard to get children for some roles, as they frequently outgrow their characters within a few years.

At the end of the day though, he asserted that the performance, like the book it is based on, is ultimately about reminding Sea Cliff what is important, and all that they have to be thankful for in their beautiful community.

“Any good theater should always enrich people and give them a sense of community, because there’s nothing like watching something together,” Stroppel explained. “Because this show moves around town, it brings together a lot of people who might not know each other, but they’re standing side by side enjoying the performance.”