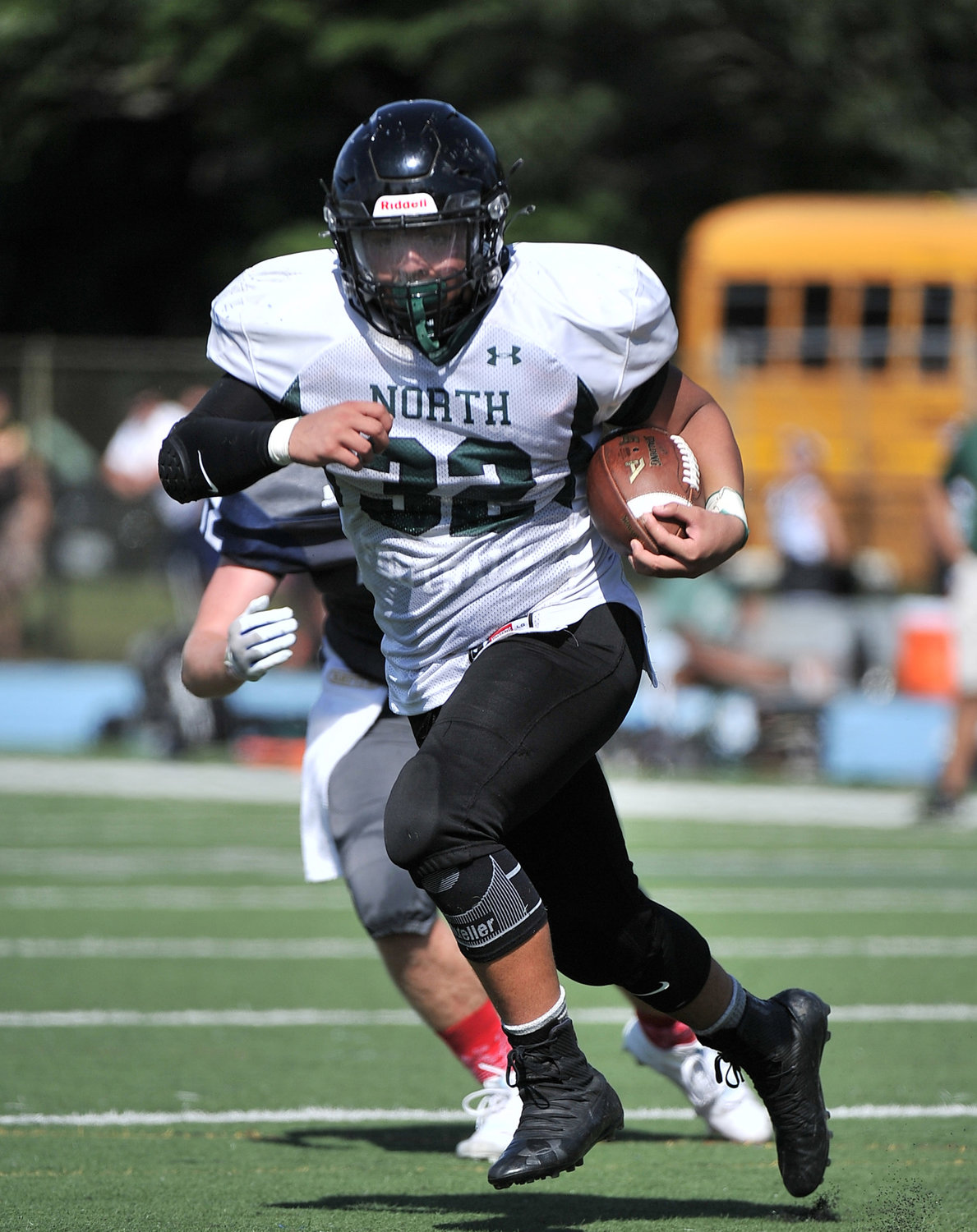 With a minute left in the second quarter, it appeared Hewlett’s homecoming game against Valley Stream North on Saturday was on pace to be a stagnant slugfest until the final whistle. The visitors maintained a miniscule one-point lead and had possession at their own 31-yard line. Momentum shifted with one fateful play.

Senior quarterback Brian Farrell threw a tight spiral around 30 yards to senior wide receiver Ethan Ramnarain, who casually shrugged off a defender and ran the distance for a 69-yard touchdown. The Spartans never looked back from there on the way to a 28-6 victory in Nassau Conference III.

“That play gave us a ton of momentum,” VSN head coach Mike Paolillo said. “Our mantra the entire year has been to finish. We knew we had to score considering they were getting the ball in the second. We just had to execute from there.”

While the touchdown pass set the tempo for the remainder of the game, it was the Spartans’ running attack and defense that solidified their victory. Senior Vaughn Candelario (38 yards on 9 carries) and junior Josh Lopez (66 yards on 8 carries) provided a consistent and potent rushing tandem from start to finish. Farrell also contributed on the ground to go with his 136 passing yards.

The Spartans’ defensive unit was nothing less than suffocating, specifically in the second half, where they held the Bulldogs to less than 40 yards of total offense. Senior defensive back Andrew Lusterino assisted in the scoring by returning a fumble 21 yards for a touchdown, and senior defensive lineman Angelo Morales notched an impressive 14 tackles.

The Spartans will look to improve upon their 1-1 record when they play perennial power Plainedge at home this Saturday. Kickoff is 2 p.m.

For the Bulldogs, health and maintaining continuity were major catalysts in dictating their defeat. Whether it was simply random or a byproduct of the scorching 90-degree weather, a number of starters were injured during the course of the game.

“We were dealing with some minor injuries,” Hewlett head coach John Palladino said. “We lost maybe four or five starters, and we tried to have that next guy up mentality, but we kind of shot ourselves in the foot. The guys who stepped in played hard but we have a lot of work to do.”

Self-inflicted penalties and mishaps hindered any chance of a second-half comeback for the Bulldogs. The tides seemed to be shifting back in their favor when senior captain Mark Winkler registered a magnificent interception in the end zone late in the third quarter, yet the costly fumble happened two plays after.

The reliable running game the Bulldogs established in the first half abandoned them in the second half. Their biggest second-half play, an elusive 60-yard touchdown dash by sophomore Mekhi Jean-Baptiste (47 yards), was mitigated by a holding call.

The Bulldogs (1-1) face a difficult task on Friday night at 7 when they hit the road to face Wantagh.