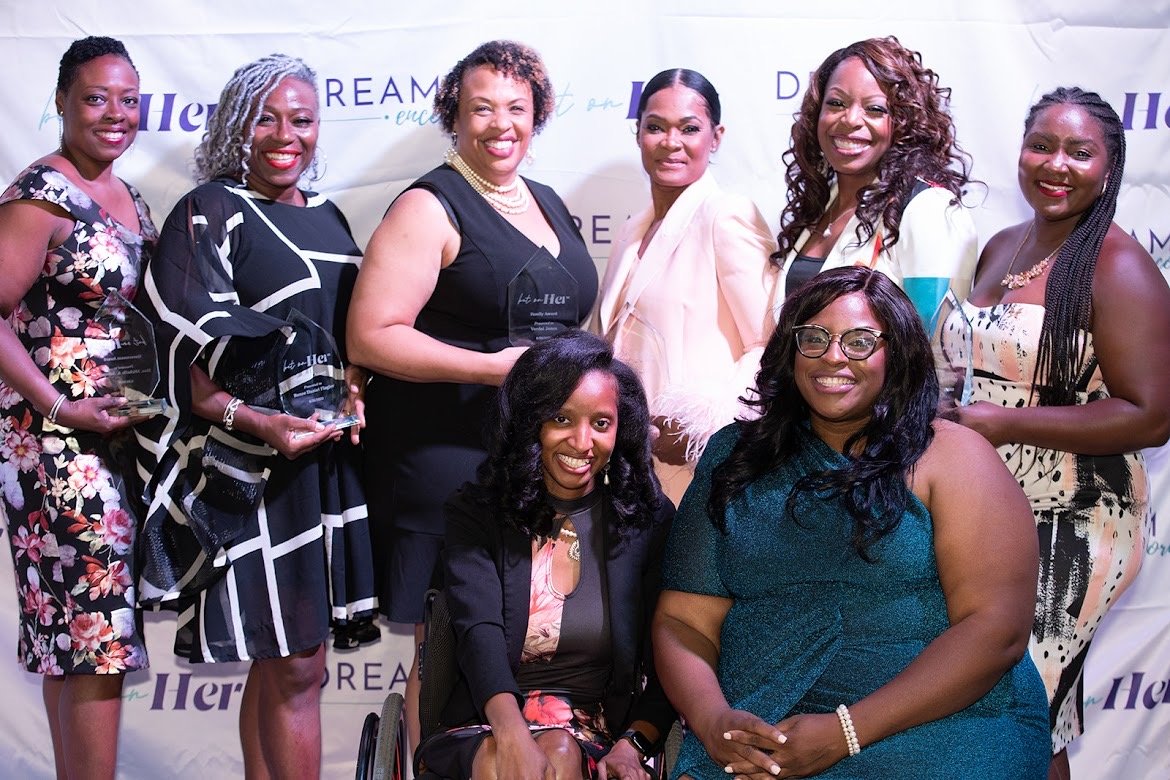 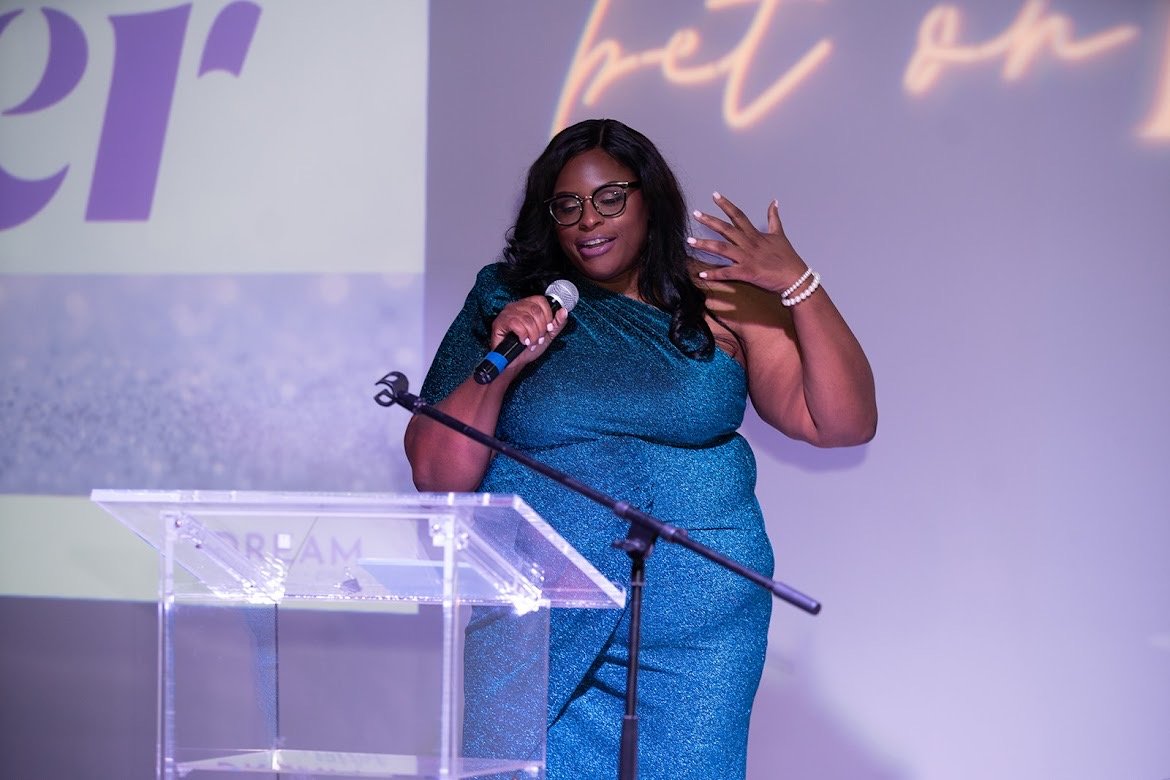 Bet on Her organizer Jessica Toussaint spoke on the importance of empowering women, and how her own recent experiences inspired her to highlight the efforts of other leading women in numerous fields.
Creative Focus Designs Inc 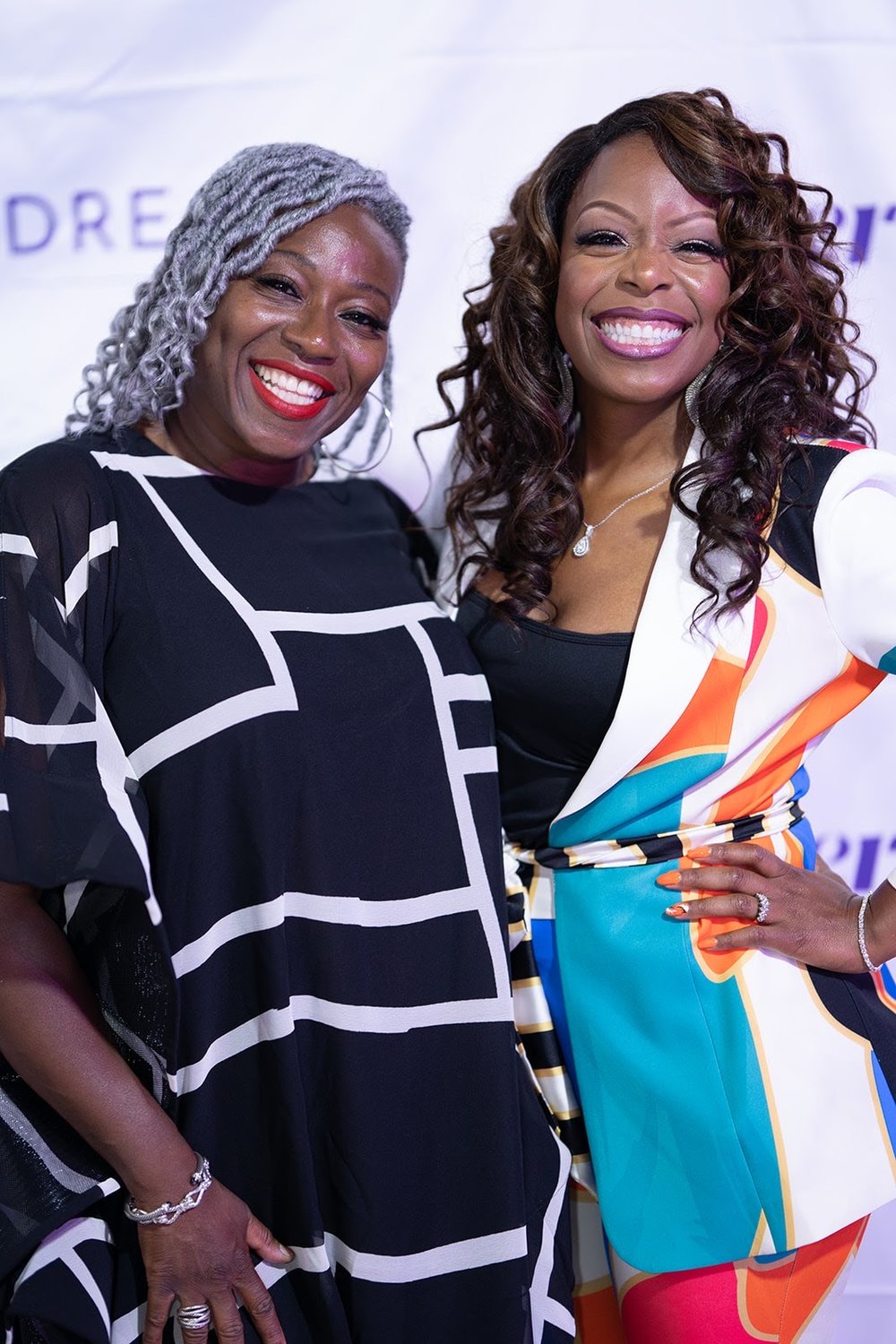 Write, speaker, and coach Renee Daniel Flagler won an award for education, while choir director and teacher Lynette Carr-Hicks was given an award in arts and entertainment.
Creative Focus Designs Inc
Previous Next
By Kyle Chin

Seven highly accomplished women were celebrated on Friday evening at the Bet on Her Awards Dinner at the Chameleon Event Space on Hempstead Turnpike.

Motivational speaker and life coach Jessica Toussaint organized the award ceremony. She is the founder of Dream Encore, a group whose stated mission is to equip leaders with tools and resources needed to make real impact. The group does coaching, workshops, retreats, and other programs to encourage success. Toussaint conceived of the awards as a post-pandemic tip of the hat to female leaders making a change in their communities and whose lives embodied empowerment.

Seven awards were given based on seven mountains of social influence. The awards were presented for arts and entertainment, business, education, family, government, media, and religion.

Lynette Carr-Hicks received the award in arts and entertainment. Director of the Uniondale High School choir is just on of many hats she wears, with background in the music industry, having started her own independent children’s choir and much more.

Carr-Hick’s beamed at the accomplishments of her choir students. “We have been on the Steve Harvey show, the Today show. They have performed with the legendary Barry Manilow, and Kenny Rogers.”

Toussaint actually first met Carr-Hicks as her student. “I’m a little emotional and a little teary, because I’m so proud of her,” said Toussaint’s former mentor.

Next, the award for success in Business was presented to Sydney Perry, baker and owner of Sydney’s Sweets. Perry’s talents have been highlighted on television numerous times.

Perry offered some words of advice to attendees. “Whatever your craft is, be the expert at your craft,” she said. “Have your customers come to you and feel like they cannot get what you provide from someone else.”

Writer and coach Renee Daniel Flagler was given an award in education. The executive director of empowerment Girls Inc. of Long Island, she has been instrumental in securing scholarship for many students.

She stressed the importance of recognizing and utilizing the resources and talents one already possesses. “God called Moses and said ‘what’s in your hand?’ Moses didn’t believe he could do the things god had told him to do, but he did. I’m asking you today, ‘What’s in your hand?’”

Verdel Jones received an award recognizing the importance of family. “I’m a talk show host. I’m an educator. I’m an author,” she explained. “But one of the things I’m most proud of is our family production.” Jones hosts Let’s Kick It With The Joneses with her husband and two children. “The show really represents a strong family that can not only love each other but like each other, and talk about things that might be little harder to talk about.”

Justice Michelle A. Johnson was presented with an award recognizing her service in government. Currently serving on the 11th Judicial Ditrict of the New York State Supreme Court, Johnson boasts an impressive career in the legal field, working for many years in the public sectors before founding The Armstrong Law Firm specializing in legal defense.

Johnson reflected on the theme of the evening. “If there’s anything to learn from ‘bet on her’ its to bet on yourself. The hardest doors to open are the ones you close on yourself.”

Deja Cromartie was granted the Bet on Her media award. She has operated her own public relations firm Deluxe Media Agency for over seven years. In her work, she has assisted organizations and brands like the National Association for the Advancement of Colored People, Young Gets it Done, the Lumina Foundation, and many more.

Finally, Pastor Jean Price received an award covering the theme of religion. Price is the CEO of Women Ignited Now LLC, a woman’s empowerment group, and has been a strong advocate for victims of sexual abuse. “I am so passionate about helping women and girls. I am a survivor of 12 years of sexual abuse, and that is my mission, my aim, my goal, to go out there and help women, girls, men, and boys that have been violated,” She said. “When god calls you to do something, it’s like I had no other choice but to do it.”

Reverend Bianca Faith Johnson offered keynote remarks. Johnson has deep roots in Baptist ministry, first preaching at 16, becoming a licensed preacher at 20, and being ordained at 30. Johnson’s activities and accomplishments are numerous, holding a Juris Doctor degree, volunteering in Kenya, Haiti, and Vietnam, and serving as president of nonprofit God’ Gospel Café Network.

The theme of empowerment in the face of challenge touched even closer to home after Johnson suffered a near-fatal motorcycle accident in 2017, leaving her paralyzed from the chest down. “If it wasn’t for women, and men, and individuals in my life who have betted on me, who have continuously poured into me and embraced my healing and helped me constantly evolve, I wouldn’t be where I am today. Tonight I’m just hoping that something I say can bring a word of encouragement to their lives.”