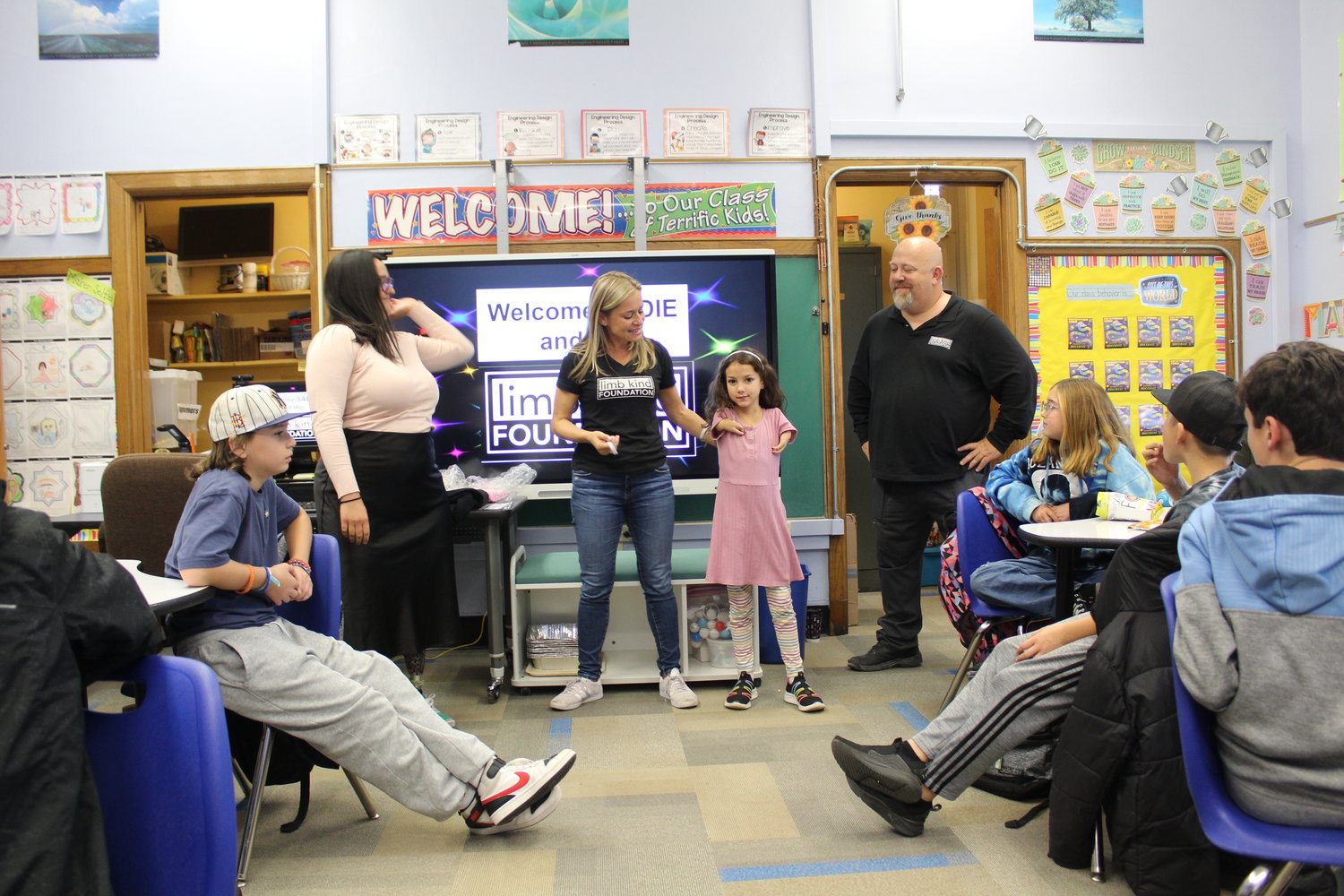 Students from Oceanside Elementary School No. 3 had a thoughtful discussion about how differences don’t define an individual with Sadie McGill, 8. She was joined by members of the Limb Kind Foundation, with Jill Smith and founder Robert Schulman.
Karina Kovac/Herald 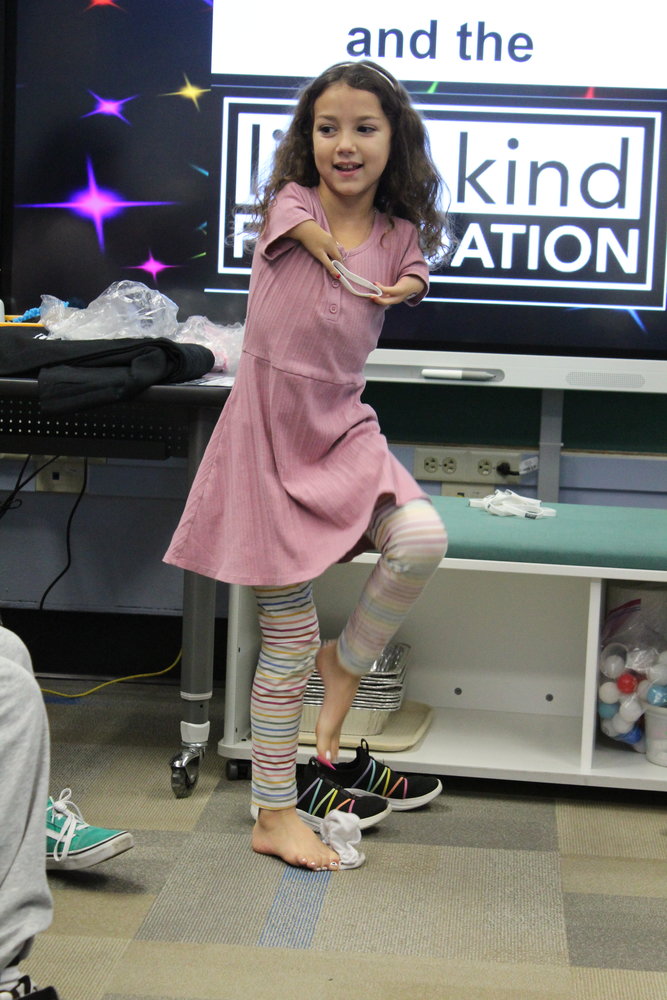 Sadie McGill, 8, showed amazed Oceanside Project Extra students how she puts her socks and shoes on without the use of arms. Later, the students were asked to try themselves. While some succeeded, they did so with far more difficulty than Sadie.
Karina Kovac/Herald
Previous Next
By Karina Kovac

Imagine trying to comb your hair or tie your shoes without arms. Ride a bicycle or swim with no legs.

That’s the daily battle of some 2 million people in this country who have had an amputation or were born with a limb difference. And it’s a battle Oceanside prosthetist Robert Schulman has endeavored to resolve by giving a hand — quite literally — to those in need with his nonprofit Limb Kind Foundation.

And he’s getting help from a group of gifted students at Oceanside Elementary School No. 3 known as Project Extra. In fact, the students have raised enough money for 8-year-old Sadie McGill — who has a limb difference — to participate in this year’s “Show Your Shine” competition, hosted by Limb Kind.

The competition features participants from all walks of life with limb differences strutting their stuff on the runway.

Schulman started his nonprofit some five years ago after

seeing the devastating physical affects of the earthquake that struck Haiti had on the children there. He’d already spent decades in the business at that point, but what he saw on his screen moved him to action, expanding his yearly reach to places like Ethiopia, Kenya and the Philippines to bring what are otherwise cost-prohibitive prosthetics to those who need the most.

In fact, a simply prosthetic in some of these countries costs enough to feed a family. For a year.

It’s not inexpensive back here at home, either, with prosthetics typically ranging between $10,000 and $15,000, or more.

Schulman actively visits local schools to show kids that those with limb differences are no different than themselves.

“Every school that we get to do is wonderful because, truly, most of these kids have never seen anyone with limb loss in-person,” he said. “They hadn’t seen the prosthesis in-person,” so it normalizes it more.

And for those like Sadie, where this was her first in-person experience talking about her condition, Schulman says it can inspire her, too.

“These children — whether it’s limb difference or limb loss — they’re used to being stared at,” he said. “It’s hard because people stare at them like they’re an oddity. So, when we do events like this, it allows people to be empowered. But it also teaches all the other people here that they’re just a kid, just like everyone else. They’re no different.”

Because of Project Extra’s fundraising efforts, when “Show Your Shine” take place Jan. 21, Sadie’s expenses for the day of her modeling debut will be paid for. This includes limo bus transportation, lunch, hair and makeup appointments, and anything else associated with the event.

Meeting her peers who helped make it possible allowed a chance for Sadie to answer some of their burning questions about her daily routines. In return, it gave Sadie an opportunity to challenge them to step into her place trying everyday tasks without the use of their appendages.

Sadie told the students she had open-heart surgery while still an infant to help correct a genetic condition. But that doesn’t stop her from doing what she loves — like Irish step dancing, drawing, and playing modified sports.

Representation matters, says Stasia Scocta, Sadie’s mother. She remembered a time growing up where there weren’t a lot of people she knew of with differences. Scocta has shown Sadie the way of navigate life and make it easier.

“She can see and mimic me,” Scocta said, “which I think will make her ability to be independent easier.”

Project Extra coordinator Stacy Greenfield said the goal of bringing Sadie was a way to increase awareness among her students when it comes to others who might be a little different. Even better, Sadie had a chance to interact with a smaller group of students, rather than potentially become overwhelmed with a large crowd.

“The program is based on research and interviewing and understanding real world problems and how we can become better problem-solvers,” Greenfield said. “This ties into how we can be better in general.”