Gates had multiple roles in the Hempstead community 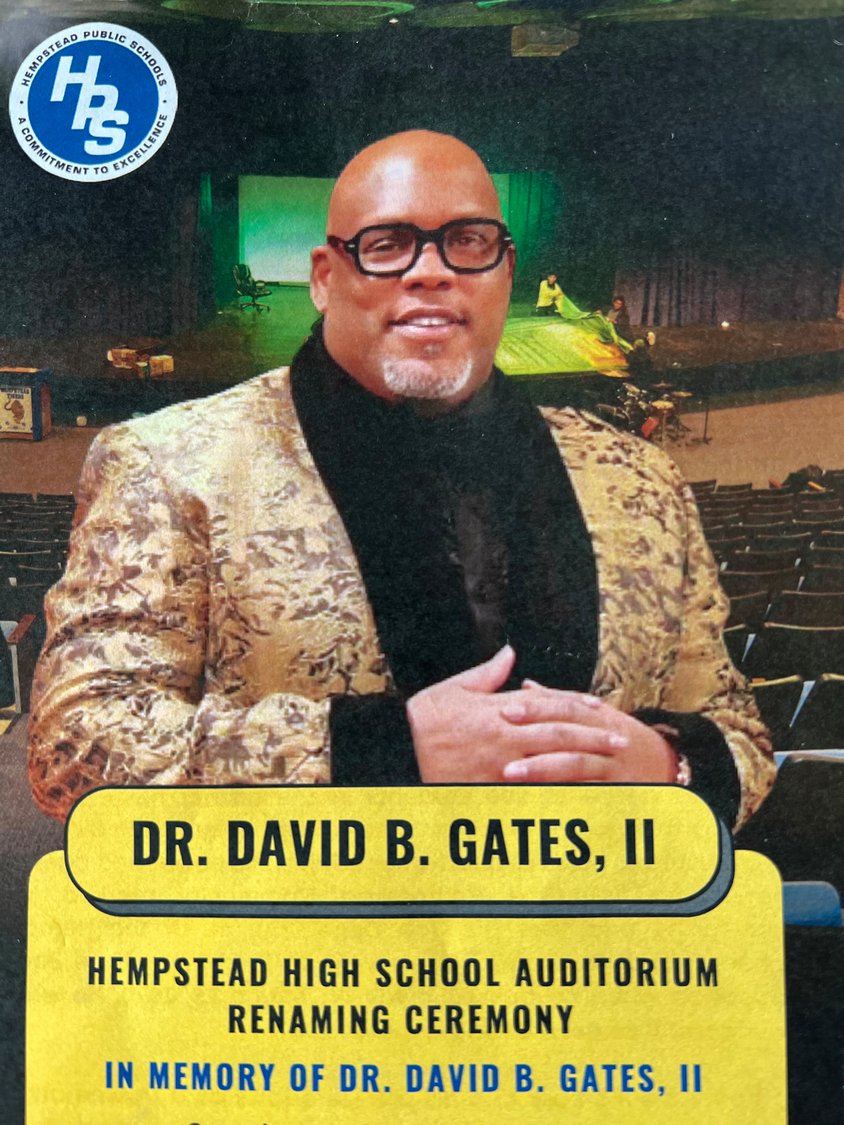 Dr. David B. Gates II was honored April 30 when the auditorium at Hempstead High School was renamed for him.
Courtesy Hempstead Public Schools

He taught the school to roar and he led by example all the way to his dying day.”
Hempstead Board of Education Trustee Randy Stith
By Reine Bethany

When David Bernard Gates, II, passed away at age 56 in March 2020, he left several gaping holes in the fabric of Hempstead Village.

He was a pastor, community advocate, NAACP president, Hempstead Board of Education trustee, and assistant to both former Hempstead Mayor Don Ryan and Town Supervisor Don Clavin.

He was an advocate for the arts, displaying his own talents in his role as the Cowardly Lion during his senior year at Hempstead High in 1982. His clear tenor voice soared above others whenever he sang: at Miracle Christian Center on Fulton Avenue, which he founded in 1997 alongside his mother, Apostle Phyllis Young; at village events; and, not in song but in words, whenever he spoke as a school board trustee.

All of these roles received loving, deeply felt commemoration on Saturday, April 30, when the Hempstead Board of Education led a ceremony to rename the Hempstead High School auditorium the Dr. David B. Gates, II, Auditorium.

Hempstead Superintendent of Schools Dr. Regina Armstrong emceed the program, calling speakers up one after the other.

“Once students continue to enter these doors and walk these halls,” said Hempstead High Principal Dr. Stephen Strachan, “that will be our opportunity to share the legacy, the contribution that this great man has extended to his school, his community, and obviously the world.”

School Board Trustee Lamont Johnson said, “It was ironic that a man that was courageous played a coward,” to shouts of approval.

Johnson called out a long list of people that he saw in attendance at the ceremony—people that Gates had known all his life, including his family, lifelong friends, and dignitaries with whom he had served. The names included County Executive Bruce Blakeman, who had been a Town of Hempstead councilman when Gates was assistant to Supervisor Don Clavin.

School board trustee Randy Stith delivered the Statement of Purpose. “His colleagues at the Board of Education and the administration of the district respected him for his ability to listen, support, inspire and to lead,” Stith said. “He taught the school to roar and he led by example all the way to his dying day.”

Gates’ niece, Brittney N. Johnson, said, “A dream he spoke of often was to build a performing arts school right here in Hempstead. … Every child who performs on this stage will know that greatness stood right here, and that same greatness that was in him is also in them.”

“His motto was this,” Gates’ mother, Apostle Phyllis Young, “if I can help somebody along the way, then my living will not be in vain.”

The Hempstead Tigers cheerleading team flashed blue-and-white pompoms in a rousing cheer, after which School Board President Olga Brown Young called the trustees, present and former, up to the stage. Stith pulled the rope that released the handsome sign from its black veil, while the audience roared its applause.