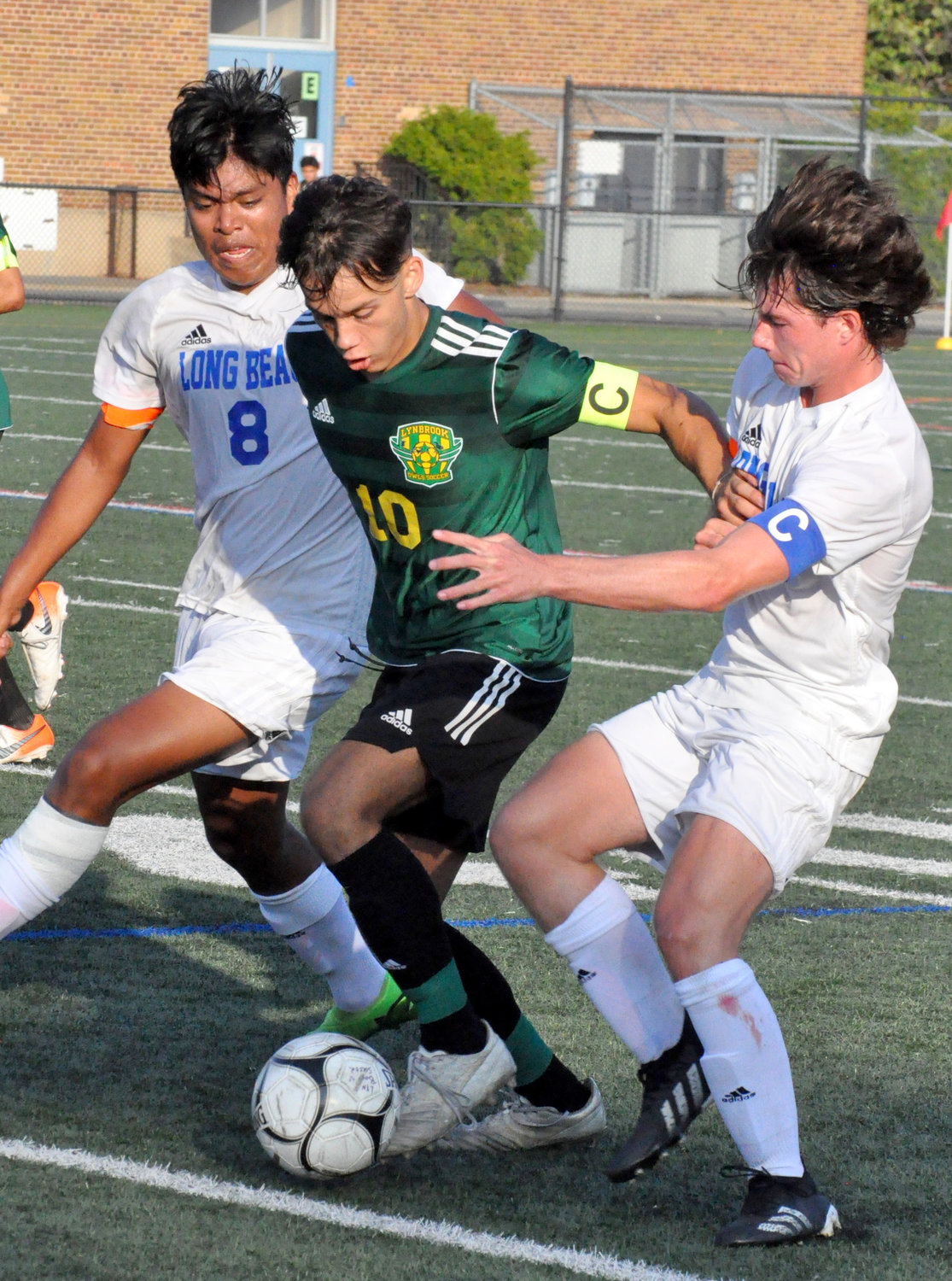 All-County senior striker Sebastian Cuenca, center, is off to a flying start for the Owls with 9 points, including 7 goals, in six games.
Tony Bellissimo/Herald
By Garrett D. Uribe

Patience has been preached and practiced at Lynbrook for a full generation – ever since boys’ soccer coach Josh Berlin began his tenure at the turn of the millennium.

In more ways than one, adherence to the principle seems poised to pay off big this season, as Lynbrook’s opportunistic, control-style game has carried the Owls – back at full strength after an injury-induced early exit from last year’s playoffs – into a tie for second place in Nassau Conference A Central at 3-1, 5-1 overall.

With All-County senior striker Sebastian Cuenca – Nassau's leader in goals (tied) and points with seven and nine, respectively, and, along with Connor Lynch (graduated), one half of Lynbrook’s starting forward duo whose simultaneous injuries hastened the Owls’ hard-luck second-round departure from last year’s Class A playoffs – returning as a third-year starter, Honorable Mention All-County midfielders Riley Fowler (senior) and Patrick O’Doherty (junior) starting a fourth and second year, respectively, and two-time All-Conference senior center middie Carlo Pantano back for his third starting turn, Lynbrook has seen its full forces restored in time to make the most of a talent peak.

The Owls, thus far, seem bent on not missing their chance.

“We have 11 seniors, up from five, and we're healthy,” said Berlin, whose club notched its third straight shutout win Sept. 19, beating league-foe host Calhoun 1-0. “There’s a feeling these boys want to create something special. They didn’t like getting knocked out (of the playoffs) last year when we weren’t at full strength. They’ve done the work and hopefully can change those results this year.”

Cuenca, whose hat trick Sept. 16 sparked a 3-0 league win over visiting Valley Stream South, leads an Owls offense geared to key off Lynbrook’s league-leading defense (one goal allowed), with first-year-starting senior Gabe Moscheni (four goals) and junior newcomer Ethan Velasquez (three goals) showing early promise as platoon successors to All-County playmaker Lynch. “We like to build attacks slowly, be patient and control the pace,” Berlin said. “Sebastian’s magnetic, and he makes others around him want to play better. With Gabe Moscheni and Ethan starting out well, it’s a nice rotation up top.”

Moving from outside to center back, sophomore Marco Pantano starts a second season for Lynbrook, flanked by first-year backs Walter Martinez (junior) and Alessio Vinceslao (senior). While Lynbrook’s back line and stacked midfield have limited the workload of Owls goalkeeper Joseph Patitucci, the first-year-starting senior has shone when called to action, permitting just one goal – on a penalty shot –in racking up four wins, three by shutout. “Joey’s come into the season with more confidence than in the past,” Berlin said. “He’s having a season he’s going to be proud of.”

Junior Owls goalkeeper Michael Diaz has been perfect in minutes off the bench, and won his only start, 5-3, at Mineola in a nonleague game Sept. 10.

“This team is capable of going as far as it wants,” Berlin said. “Our conference seems to have lots of parity. We just want to improve, little by little, and by the end of the season be at our best.”