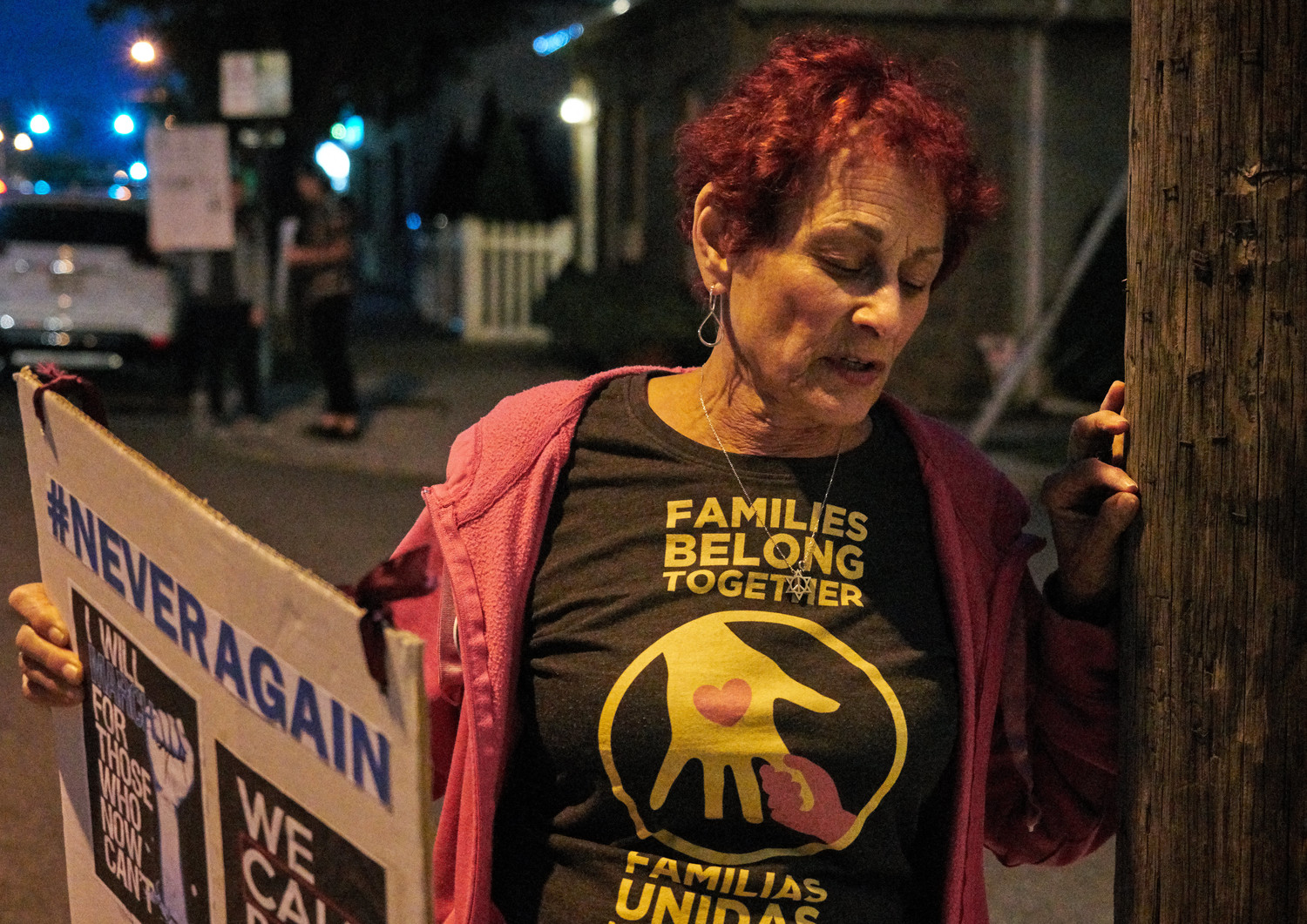 Judi Gardner, of Huntington, protested outside the Inn at New Hyde Park during the annual Nassau Friends of NRA fundraiser on Sept. 27.
Jordan Laird/Herald 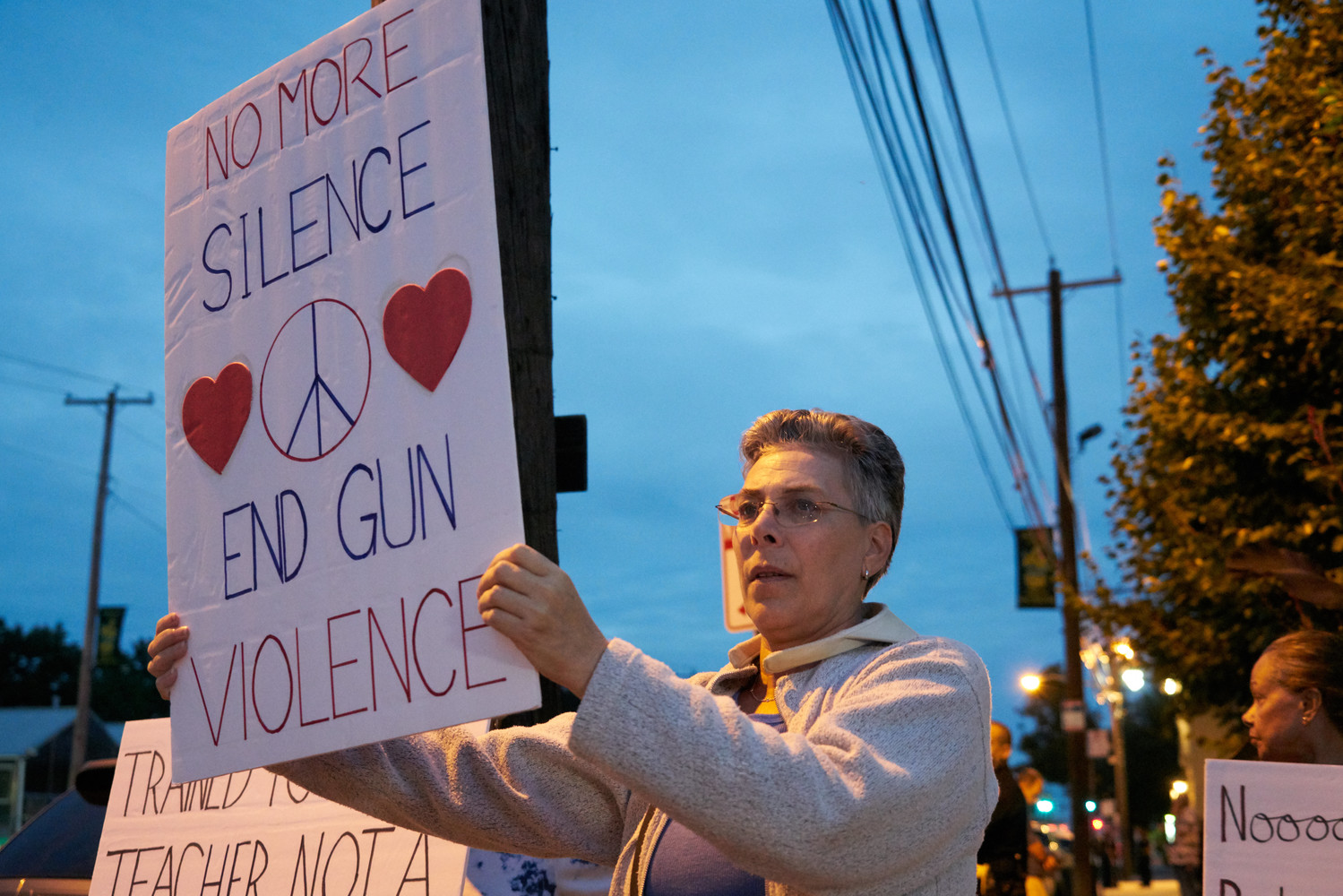 Randy, of Bayside, Queens, held up a protest sign outside the fundraiser.
Jordan Laird/Herald 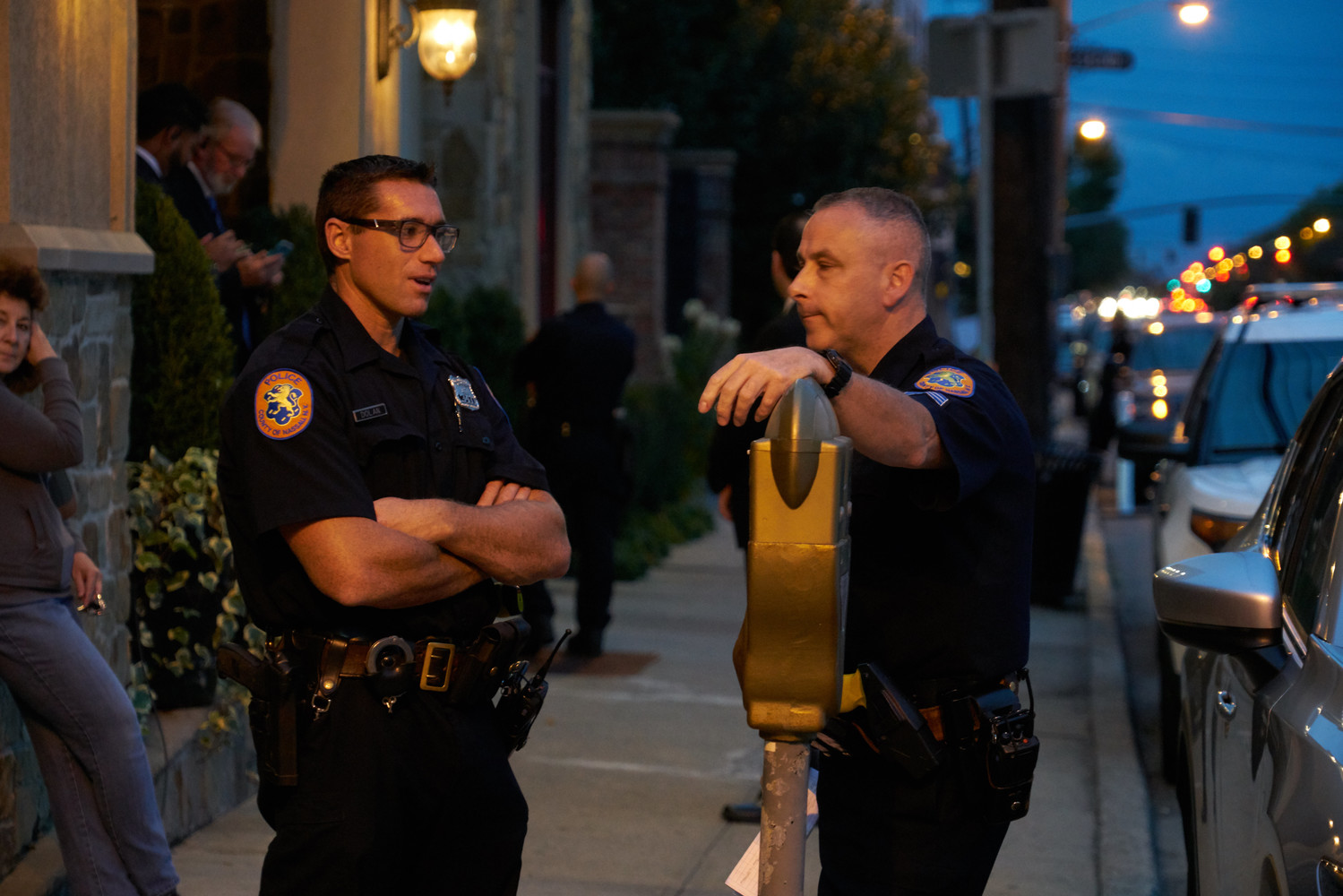 On the night of the fundraiser, Nassau police officers outnumbered the protestors. Here, two officers waited outside the Inn.
Jordan Laird 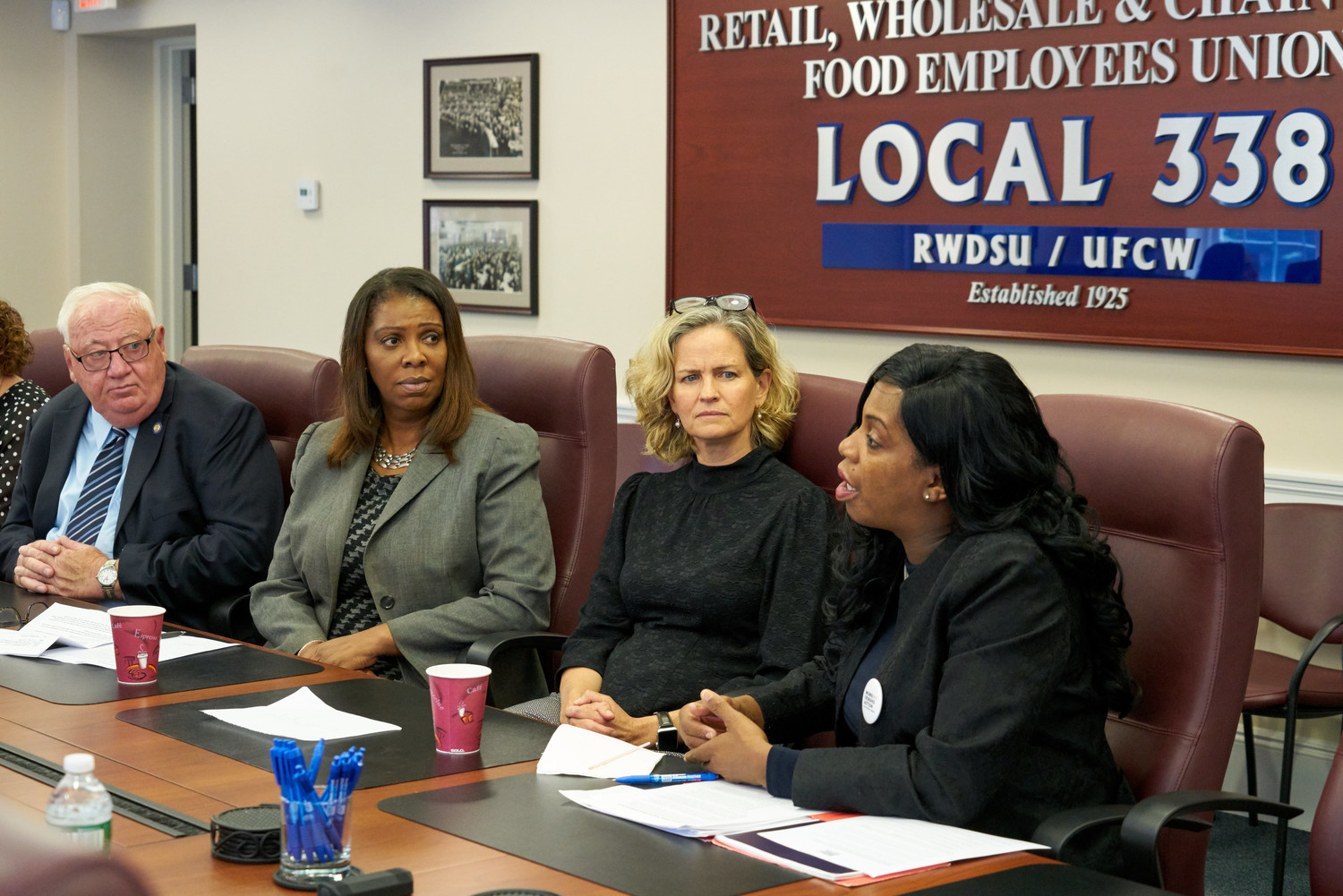 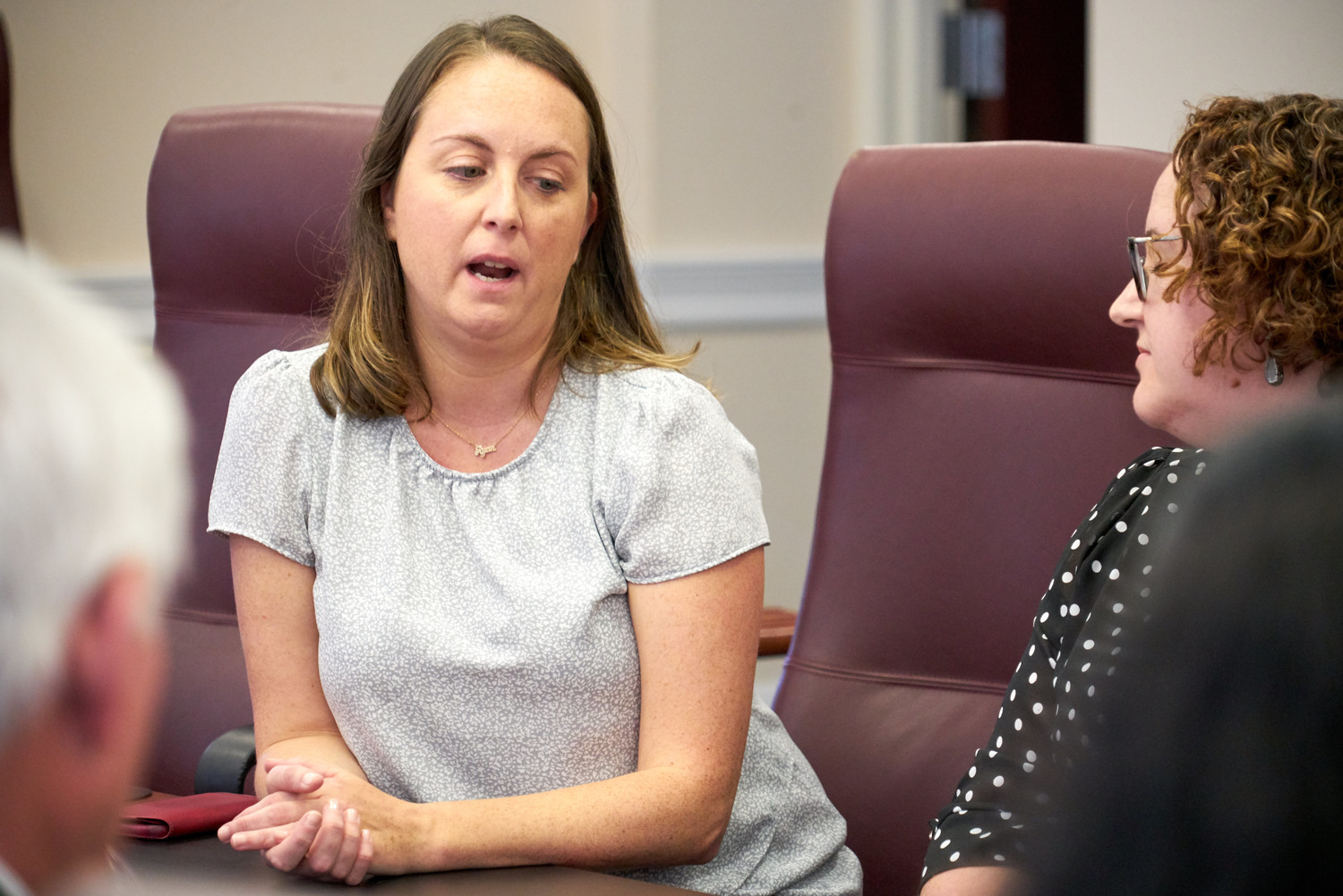 Ellie Musmeci, of Plainview, represented Long Islanders for Gun Safety at the roundtable discussion.
Jordan Laird/Herald
Previous Next
Voices of the dispute

“These guys can cry,...moan, whatever they want to do. It’s no different than going through a licensed dealer.” -Nassau Friends of NRA Treasurer Bryan Pemberton

“At the end of the day, there’s still a message that they’re sending by raffling off a firearm during their fundraiser.” -Assemblywoman Michaelle Solages

“It happens because you get these small vocal groups of people trying to take these people’s guns away.”- Nassau Friends of NRA Treasurer Bryan Pemberton

“NRA is an organization that needs to be held accountable for the destruction and the loss of lives that it is impacting here on Long Island and all across our nation.” -state attorney general candidate Letitia James

At a National Rifle Association fundraiser in New Hyde Park in September, several shotguns, rifles, buck knives and pistols were raffled off. Among the prizes was the 2018 Friends of NRA Gun of the Year set: a silver stag knife, a limited edition handgun engraved with the words “Defending Freedom” and a display case.

All proceeds from the Nassau County Friends of NRA banquet went to the NRA Foundation, the organization's charitable arm, which helps fund shooting ranges, gun safety classes and other community programs. The fundraiser was held at the Inn at New Hyde Park on Sept. 27. This year, during a time of increased debate over gun control, the event drew protests of the venue and elected leaders’ criticism.

“At the end of the day, there’s still a message that they’re sending by raffling off a firearm during their fundraiser,” said Assemblywoman Michaelle Solages, a Democrat from Elmont who attended a Sept. 16 protest outside the Inn.

Letitia James, New York City Public Advocate and Democratic nominee for attorney general, hosted a Gun Violence Roundtable in Mineola the morning of the fundraiser in reaction to the event. James said that she made “no distinction” between the lobbying and charitable arms of the NRA. “NRA is an organization that needs to be held accountable for the destruction and the loss of lives that it is impacting here on Long Island and all across our nation,” James said.

Nassau Friends of NRA Treasurer Bryan Pemberton, of Glen Cove, took issue with Solages’ judgment of the raffle. “These guys can cry ... moan, whatever they want to do. It’s no different than going through a licensed dealer,” Pemberton said. All of the prizes at the fundraiser were handled and distributed by personnel from Camp-Site Sport Shop Inc. of Huntington, a licensed gun store. In order to collect any firearms, recipients had to pass a background check and possess the correct license for the firearm. Pemberton said that winners have been denied in the past.

“It’s somewhat ridiculous,” he said. “These groups are trying to shut down our right to assemble and our right to free speech, and they used some very nasty, intimidating tactics on the venue.”

In August, members of the Nassau County chapter of Moms Demand Action made repeated phone calls and sent emails calling on the catering hall to cancel the event. The Inn at New Hyde Park refused to back out of the contract. In early September, the Nassau County Democrats cancelled a fundraiser at the Inn scheduled for October.

On Sept. 16, Long Islanders for Gun Safety and Together We Will Long Island hosted a protest outside the catering hall. Newsday estimated a turnout of about 50 people. Attendees included local elected officials and two relatives of victims of the shooting at Marjory Stoneman Douglas High in Parkland, Fla. Pemberton alleged that the protesters intentionally planned the protest to interrupt two weddings held at the venue.

At the same time as the fundraiser, Assemblyman Anthony D’Urso, a Democrat from Port Washington, moderated a previously scheduled gun sense forum at the Great Neck Library. The panel was co-hosted by Moms Demand Action and Great Neck-based North Shore Action. A Nassau Moms Demand Action organizer said that the timing was coincidental.

The night of the event also brought together a much smaller group to the catering hall of about 10 protesters from Long Island and Queens. The number of Nassau County Police officers on the scene, including two officers on horseback, outnumbered the protesters in front of the venue.

“We’re protesting the NRA and their beliefs,” said Craig Mark of Bayside, Queens. Referring to the difference between the charitable and lobbying branches of the NRA, Mark said, “It’s the same thing if you ask me. I’m not trying to take anybody’s guns away from them.” Mark said he advocates for “sensible gun ownership.”

Pemberton and his family are all benefactor-level members of the NRA, a higher level of membership that lasts for life. Pemberton explained why he thinks the rhetoric has become so heated, saying, “It happens because you get these small vocal groups of people trying to take these people’s guns away.”

According to Pemberton, the fundraiser’s ticket sales doubled this year because of the increased publicity. Pemberton estimated about 450 tickets sold this year and 220 tickets last year.