A festival of faith and lights in Merrick 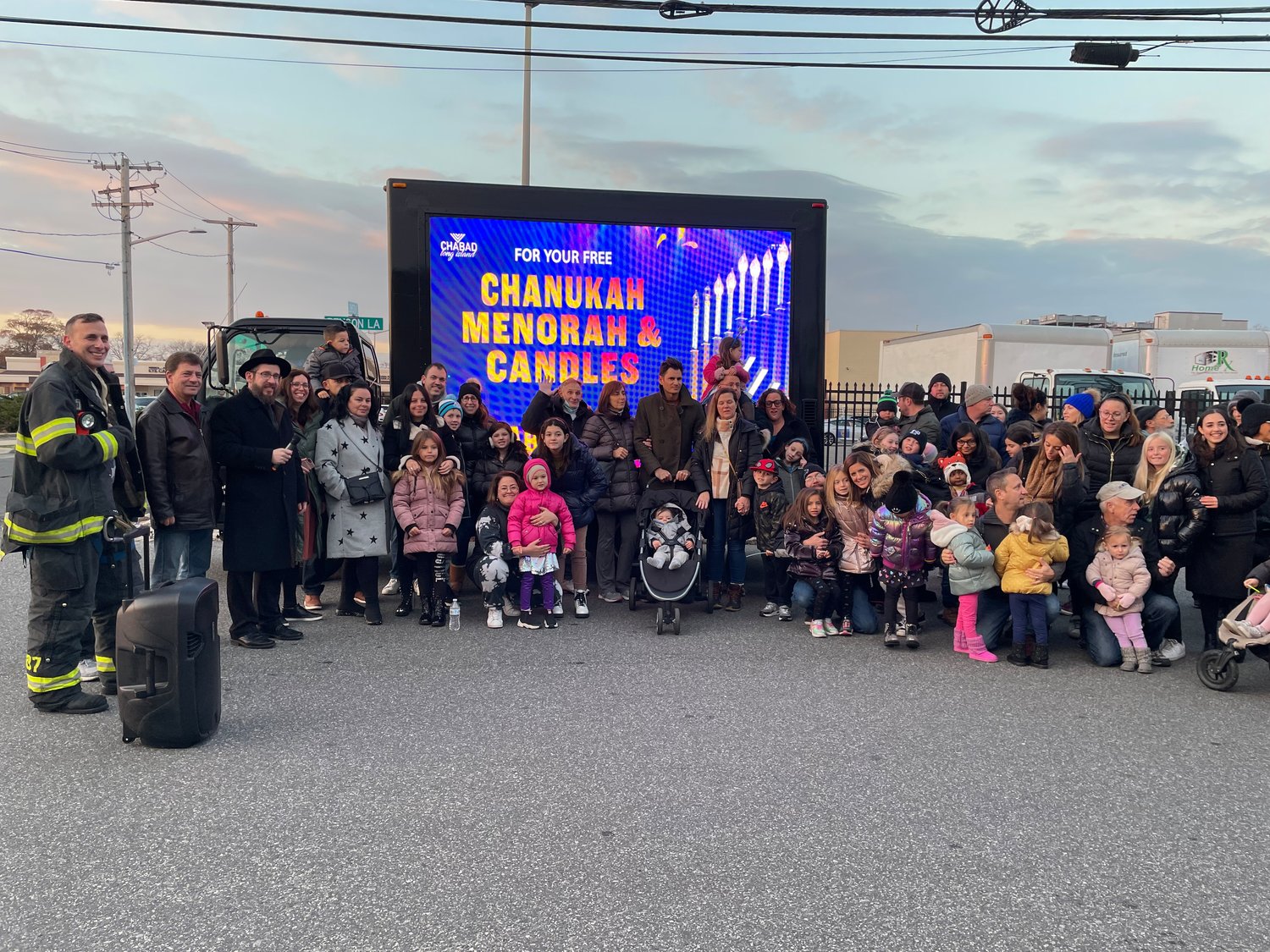 On Sunday, Bellmore-Merrick residents and Chabad members gathered before the start of the parade that celebrated the beginning of Hanukkah.
Jordan Vallone/Herald 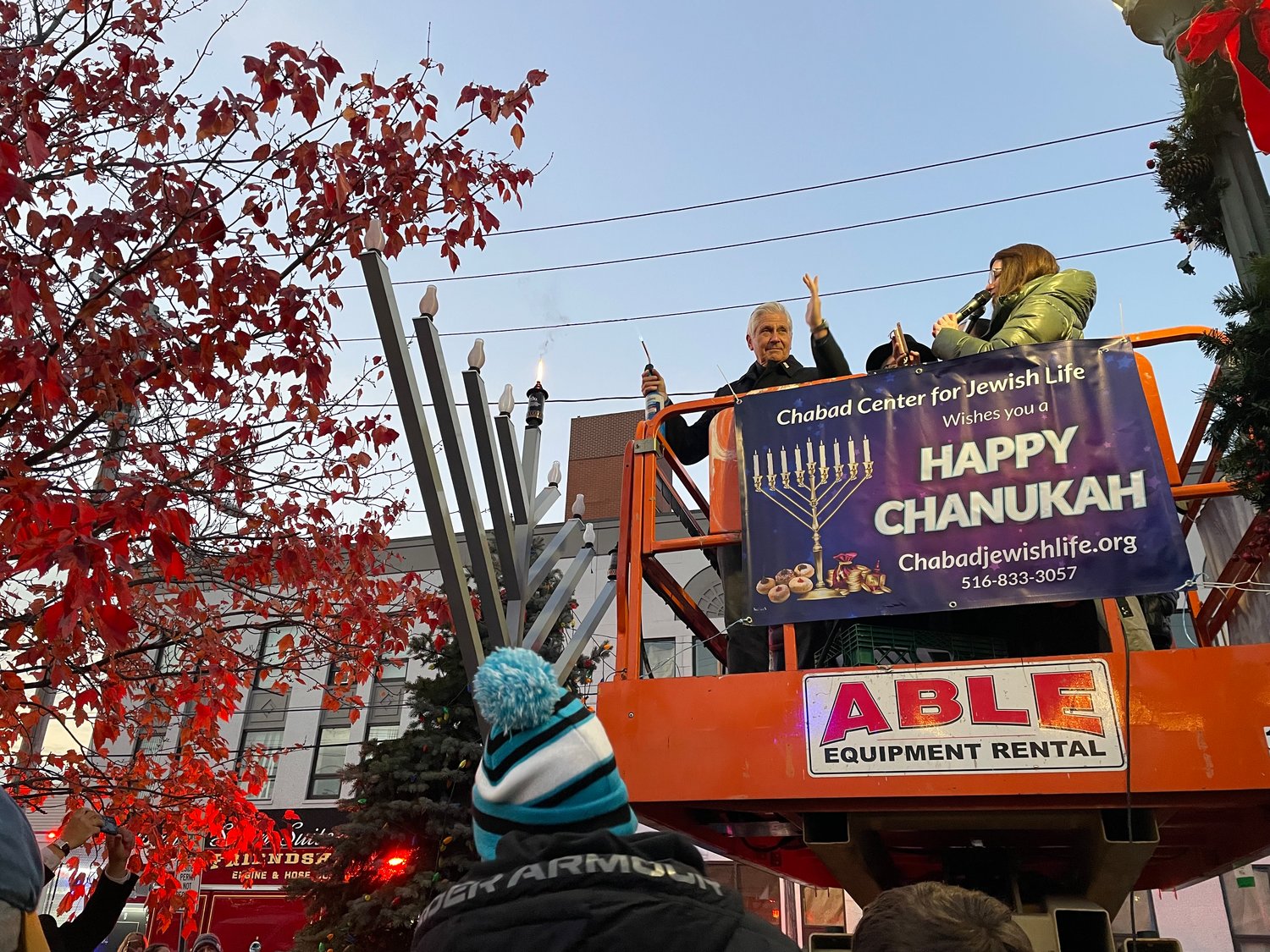 County Executive-elect Bruce Blakeman was given the honor of lighting the shamash, the candle in the center of the menorah.
Jordan Vallone/Herald 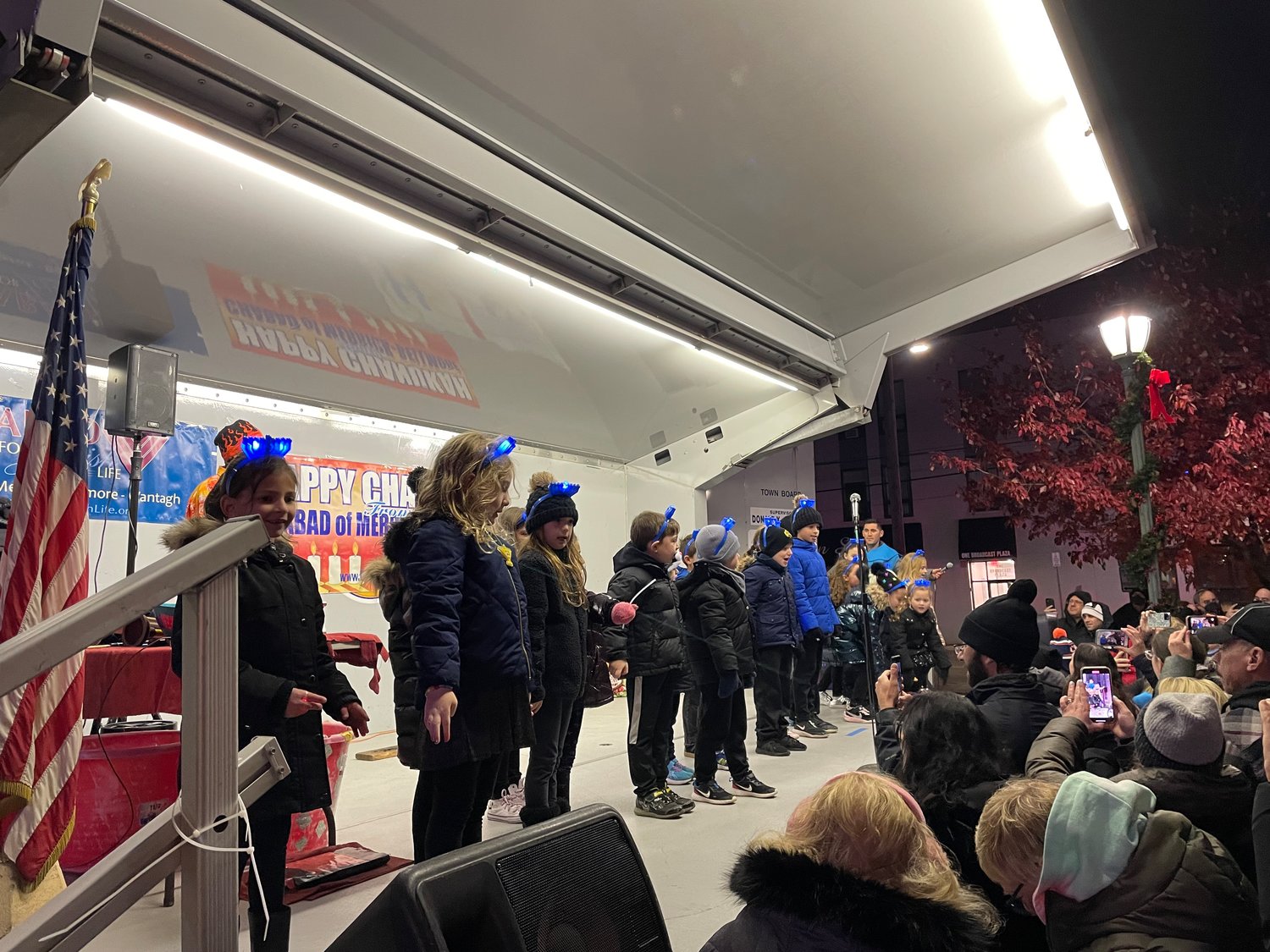 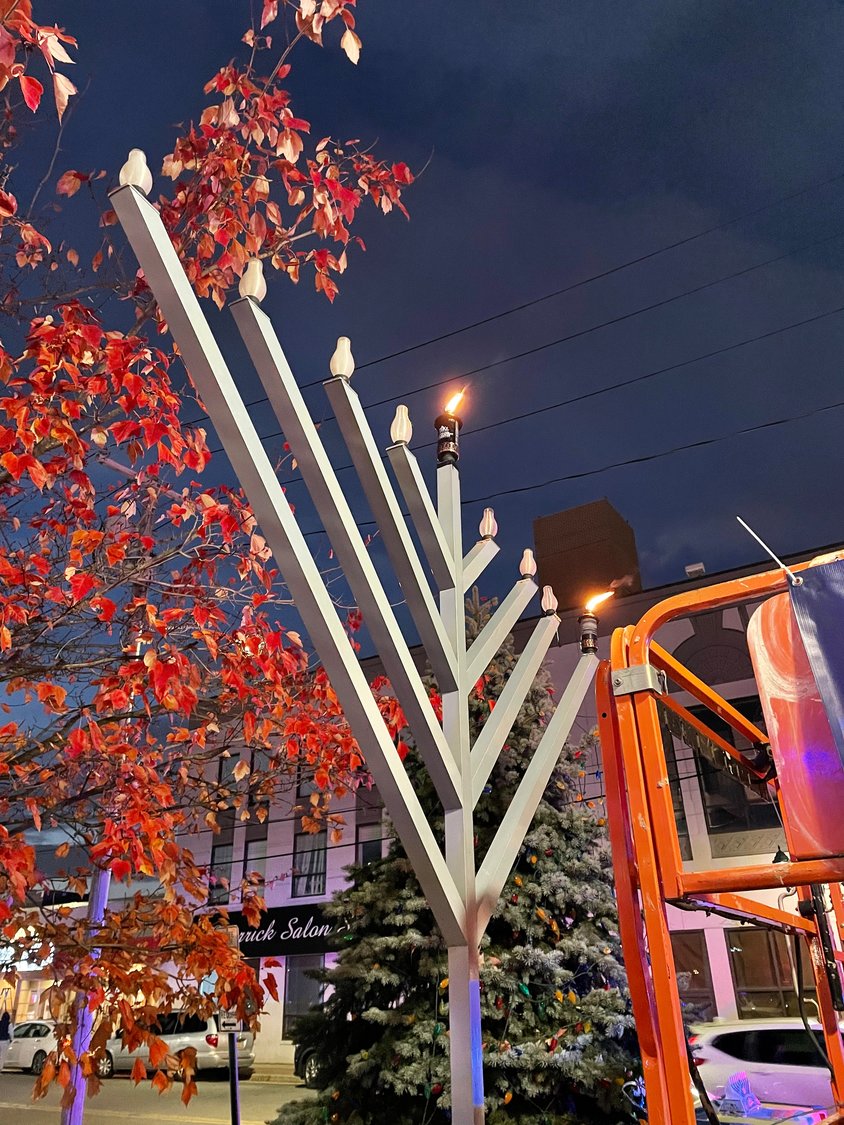 The 12-foot-tall menorah sits adjacent to the Merrick train station, by the gazebo on Merrick Avenue.
Jordan Vallone/Herald 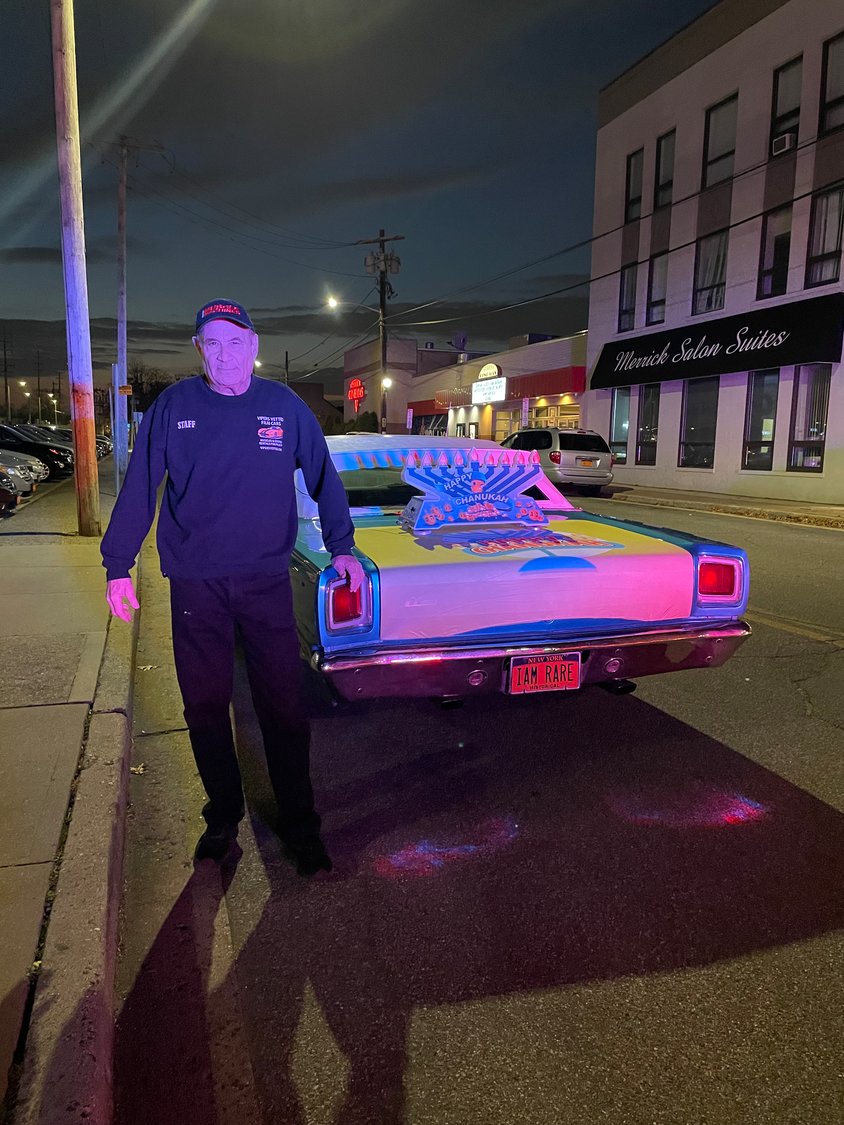 Alan Stewart, a vintage car owner from Merrick, donates one of his vehicles every year to the parade. This year his 1969 Plymouth Roadrunner sported a menorah for the festivities.
Jordan Vallone/Herald 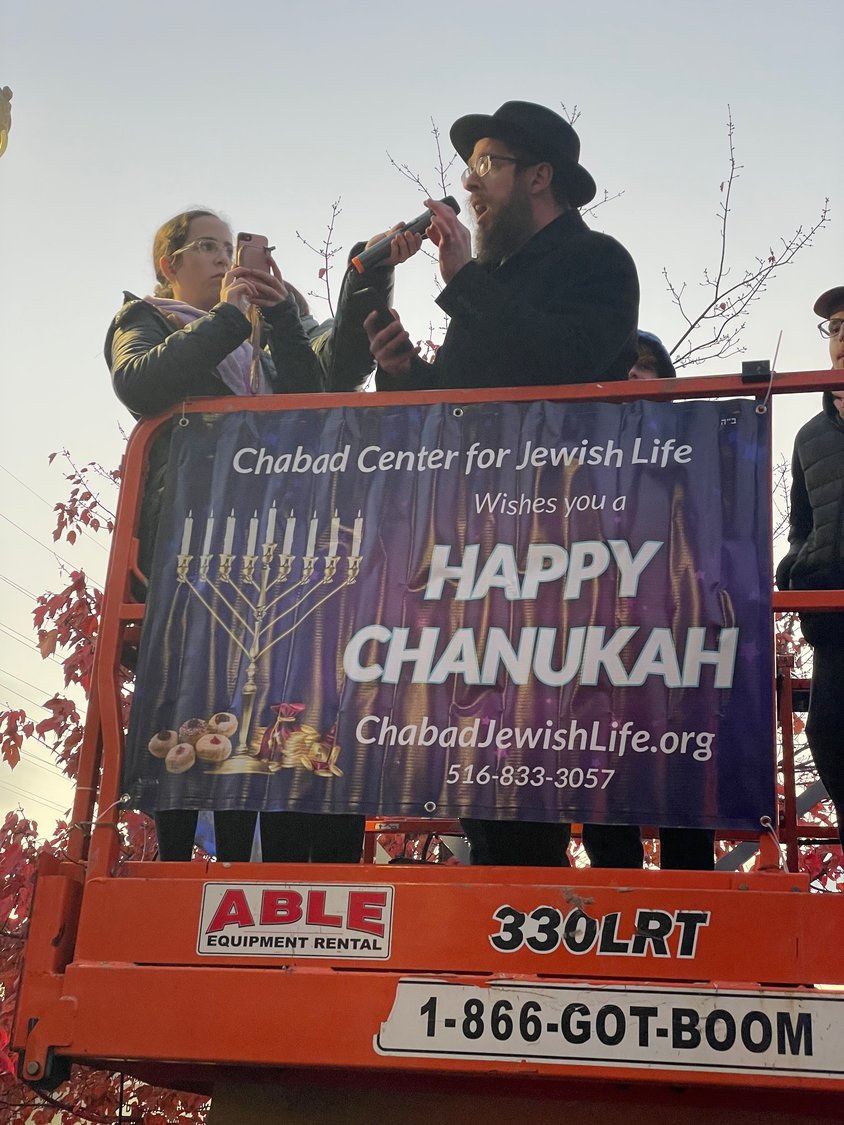 Rabbi Kramer kicked off the menorah lighting with a holiday message and a prayer.
Jordan Vallone/Herald 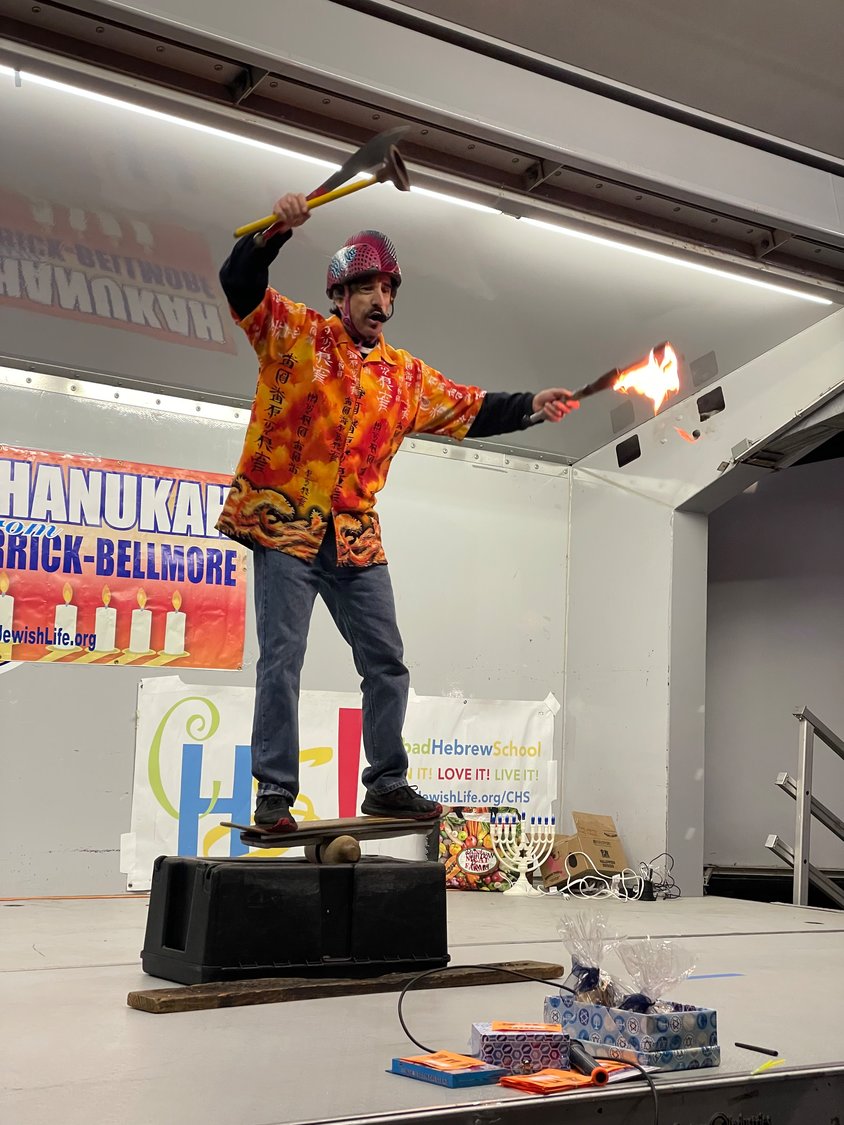 At the end of the evening, Keith the Fire Juggler performed stunts that included juggling knives and torches.
Jordan Vallone/Herald 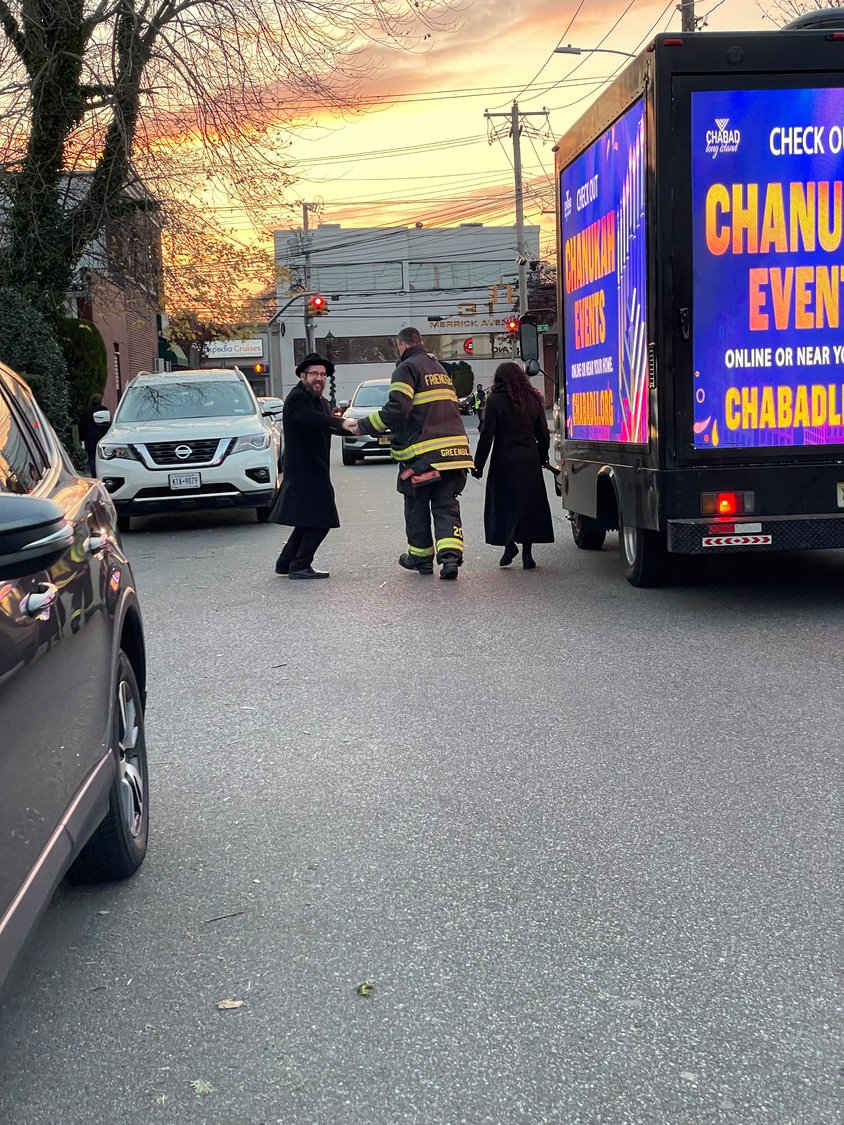 Rabbi Shimon Kramer, of the Chabad Center for Jewish Life, danced with a firefighter from the Merrick Fire Department’s Friendship Engine and Hose Co. during the parade.
Jordan Vallone/Herald
Previous Next

We all have a little bit of light in us.”
Rabbi Shimon Kramer, Chabad Center for Jewish Life
By Jordan Vallone

Bellmore and Merrick residents rang in the holiday season on Sunday at the Hanukkah and menorah lighting parade that is hosted every year by the Chabad Center for Jewish Life in Merrick.

Now in its 15th year, the parade started at the Chabad Center, on Benson Lane, and attendees headed toward Merrick Avenue. The destination was the gazebo at the Merrick train station, where a 12-foot-tall menorah waited to be lit. Music blasted from speakers and parade goers danced down the street as a fire truck from the Merrick Fire Department’s Friendship Engine and Hose Co. led the way.

“This is actually the start of Hanukkah,” Rabbi Shimon Kramer said at the parade. “This will last eight days, and we are so happy that we have the honor to begin the holiday.”

Hanukkah — also referred to as the Festival of Lights — is a Jewish festival that commemorates the recovery of Jerusalem and the rededication of the Second Temple. It is celebrated with holiday music, food and rituals that include the lighting of menorah candles. This year’s celebration officially began at sundown on Sunday.

“On Hanukkah, we remember the miraculous victory when light overcame darkness,” Kramer said. “Many of us, unfortunately, feel like there is darkness all around us.”

The attendees included not only Bellmore and Merrick residents and members of the Chabad, but also Nassau County Executive-elect Bruce Blakeman, who will take office on Jan. 1. Blakeman was given the honor of lighting the shamash, the candle in the middle of the menorah.

“Happy Hanukkah,” Blakeman said moments before he lit it with a propane torch. “May you all have a blessed and happy holiday for the festival of lights.”

Afterward, there were musical performances by Jewish Early Learning Center preschoolers and Chabad Hebrew School students. Some of the older Hebrew School students re-enacted the story of Hanukkah. And as families and other attendees enjoyed donuts and hot latkes — traditional potato pancakes — Keith the Fire Juggler put on a show that involved tricks such as juggling knives and lit torches.

Also involved in the night’s festivities was Alan Stewart, a Merrick resident who owns a fleet of cars that he rents out for movies or television commercials. Each year since the Chabad’s first parade, a different one of Stewart’s cars — usually sporting a menorah — has taken part in the parade. This year it was his rare 1969 Plymouth Roadrunner.

“I do this every year for the Chabad,” Stewart told the Herald. “… I’ve been doing this for 15 years. It’s just a donation, so to speak, that I give to them on Hanukkah.”

As residents celebrated, Kramer reminded everyone in attendance why they celebrate the holiday, and how they, too, could make a difference in others’ lives. “We don’t push away darkness through a broomstick,” he said. “All we need is a little bit of light, and we push away the darkness.

“We all have a little bit of light in us,” Kramer added. “Let’s go out to the streets, when we are done here tonight — go home, light the menorah. Find a neighbor — somebody who doesn’t have a menorah — and bring them one. Bring them a dreidel, bring them a latke. Light up their homes and light up the streets.”