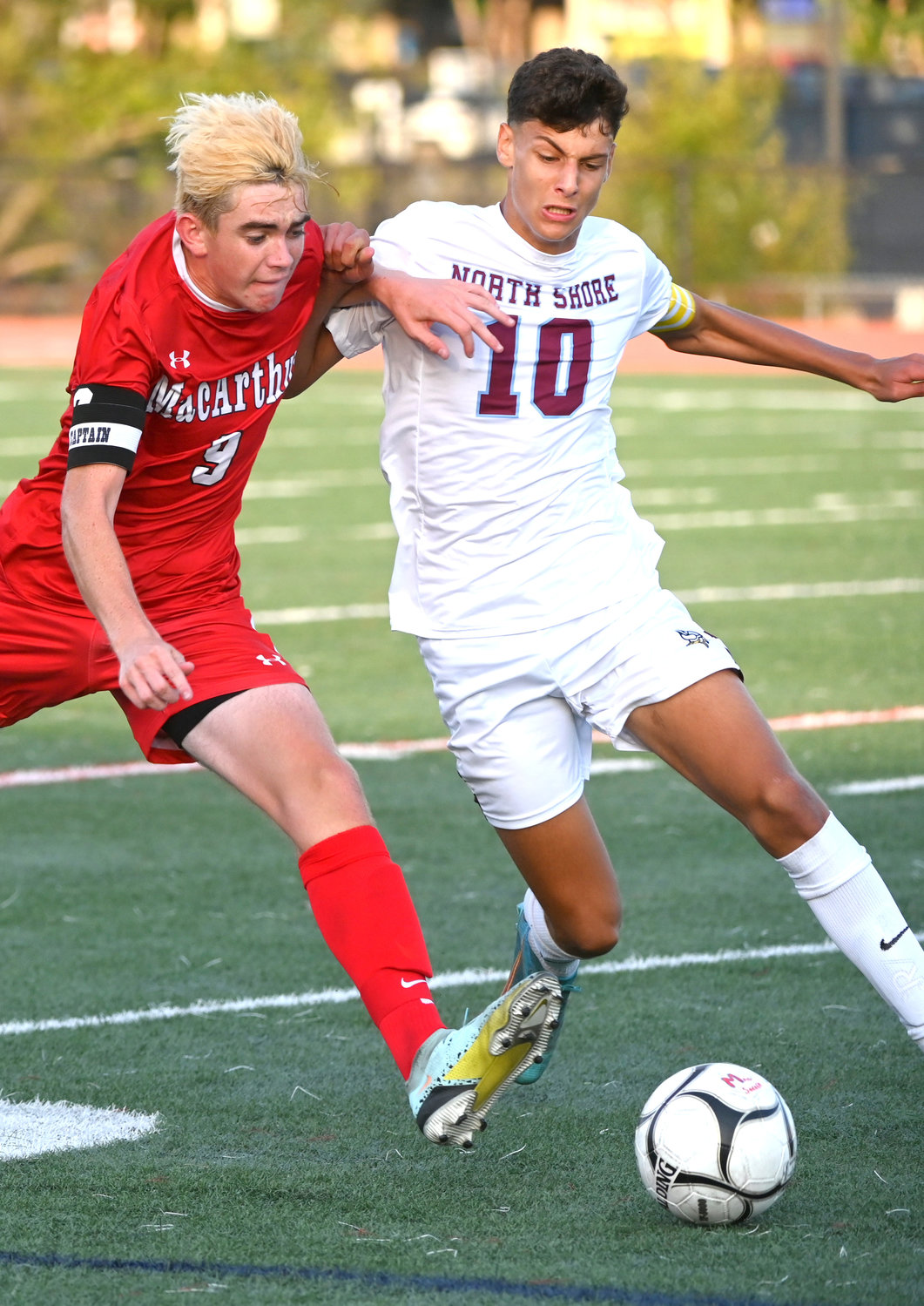 North Shore’s boys’ soccer team has lifted its fortunes recently, though Thursday’s Oct. 6 match against Glen Cove was to be a litmus test.
After winning the conference title last season, posting an 11-1 record, the Vikings were hurt by graduation losses and began the 2022 season anemically.
But matters have turned as North Shore has recorded a 2-0-1 clip in its last three contests, including a rugged tie against powerhouse Jericho. That big effort came after wins over Bethpage and Division.
“We’ve turned it around,’’ Vikings coach Mike Bishop said. “Defense is our strength but we’re starting to click offensively.’’
Much of its goal-scoring left the Glen Head campus for college pastures. North Shore’s three 2021 stars are playing soccer on the next level — Devon Seneca (Molloy College), Matteo Kanakaris (Iona) Nick Suraci (University of Scranton).


Those three soccer studs led the 2021 Vikings to an 11-0 start – even if the soccer team’s success was overshadowed by the historic championship ride of the North Shore football team.
The slow beginning to 2022 was partly a result of division realignment. North Shore is in the Eastern Conference of A1. “It’s a geography alignment so we’re playing in a tougher conference, playing much bigger schools,’’ Bishop said.
Two brothers who play striker are keying North Shore’s surge. Senior co-captain Dario Leighton and sophomore sibling, Lino Leighton, have five goals and four goals, respectively.
“They’re starting to really click the last few games,’’ Bishop said.
Defense, however, is what carries the maroon squad. Senior center back Matt Cianciulli is North Shore’s rock. “He plays on a good club team and is a very smart, technical defender,’’ Bishop said.
Another pair of brothers are keeping opponent offenses at bay. Senior defender, captain Dean Mallen and his younger brother, sophomore Thomas Mallen, are having notable seasons. According to Bishop, the Mallen brothers are very supportive of each other and each are “tough, physical defenders.’’ Dean Mallen is also an honors student while Thomas is a very rare sophomore varsity starter.
The midfield has potential, too, in senior Yousef Helo and sophomore Griffin Pinter.
North Shore is strong in goal with Matthew Nochowitz, a baseball star who sat out the 2021 campaign to focus on his college-playing aspirations.
North Shore has run into some hard luck with one loss being no fault of the goalie. A 0-0 game with nearby Friends Academy ended with a North Shore player accidently putting the ball into his own net. And a sure victory over Kennedy ended in a tie when North Shore gave up a goal off a corner kick with 27 seconds left.
Last season, North Shore lost its final regular season game, then got dropped by Glen Cove in the opening round of the Nassau Class A playoffs, 4-1. Thursday’s rematch will be telling.
“We’ve got a couple of tough games ahead but winnable games ahead,’’ Bishop said. “Glen Cove is a tough game. I still think we definitely could be playoff-bound.’’
After facing Glen Cove, the Vikings close the regular season with three games next week: home against Wantagh at 10 a.m. Monday, home against Mepham Oct. 12 at 5 p.m., and a trip to Island Trees two days later for another 5 p.m. start.