Preserving history, one fire engine at a time 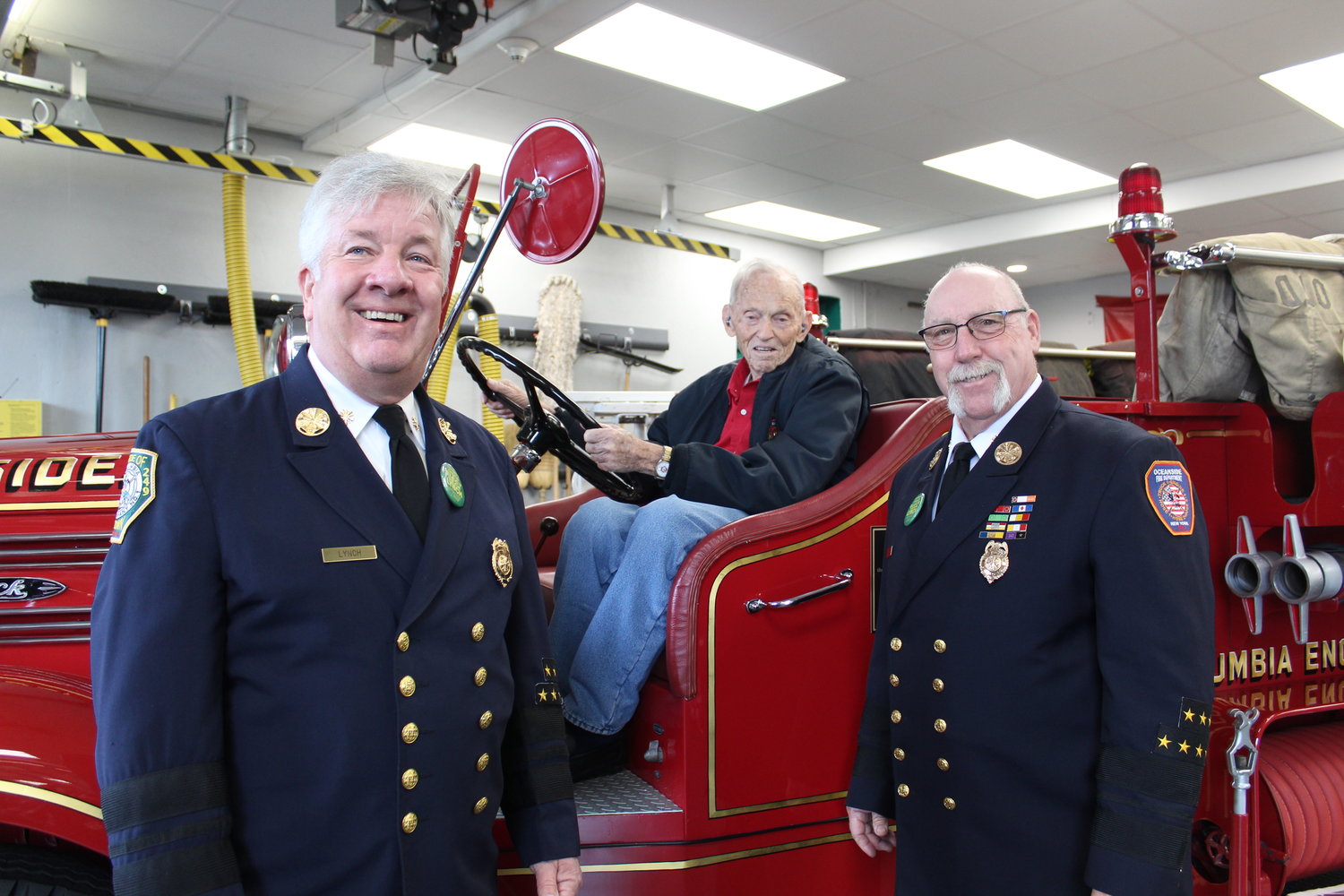 An ecstatic Karl Thuge sat at the driver’s wheel of the historic 1947 Mack truck that he and members of the Columbia Engine Company No. 1 Historical Committee — including Bill Lynch, left, and Fredrick Robinson — sought. Thuge worked in the same factory in which the truck was built in 1947.
Karina Kovac/Herald 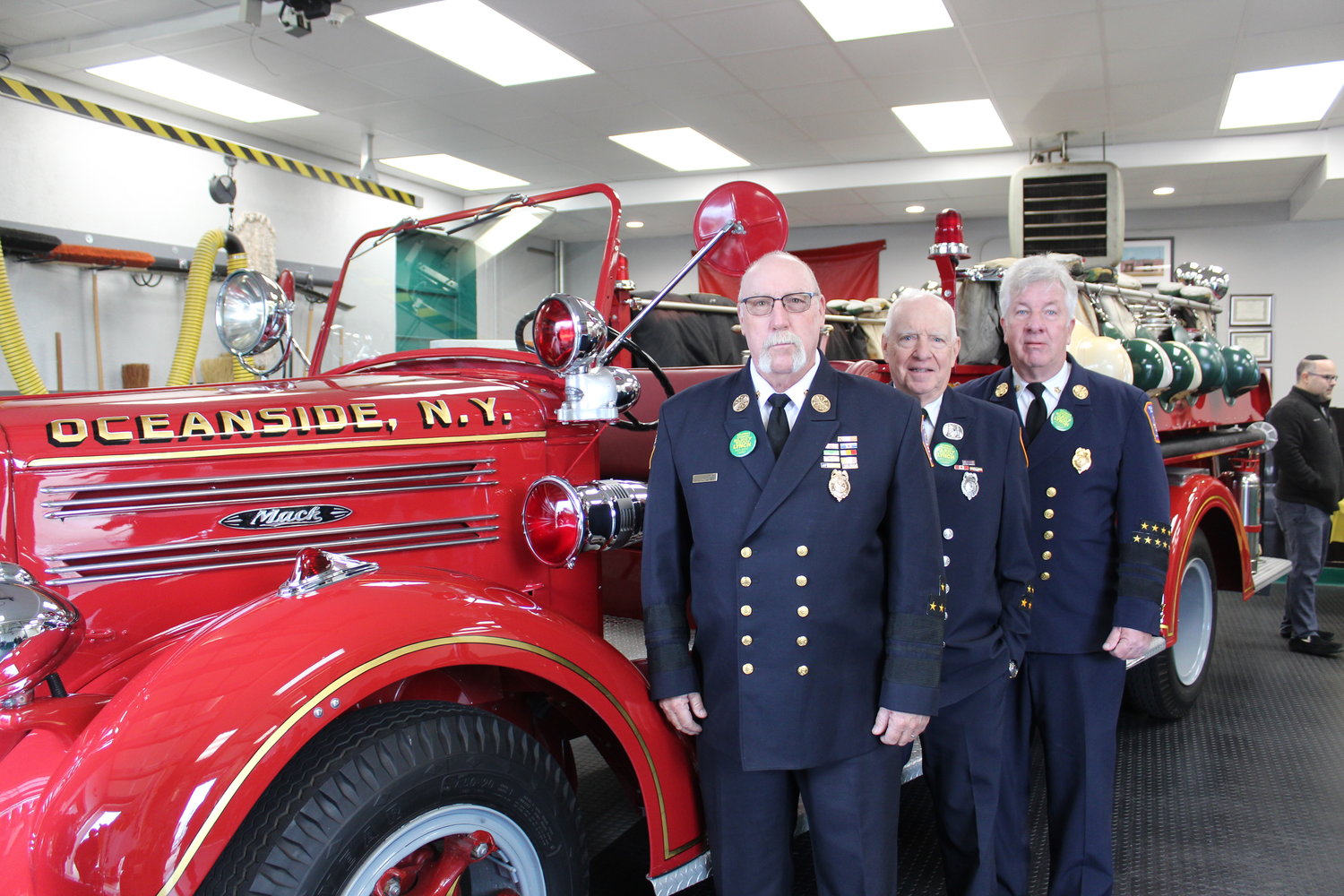 They sought it, and found it — a 1947 Mack truck that has been the focus of a quest by Columbia Engine Company No. 1 Historical Committee members Fredrick Robinson, Paul Facella and Bill Lynch for some time. After a restoration, the antique engine has now returned home.
Karina Kovac/Herald 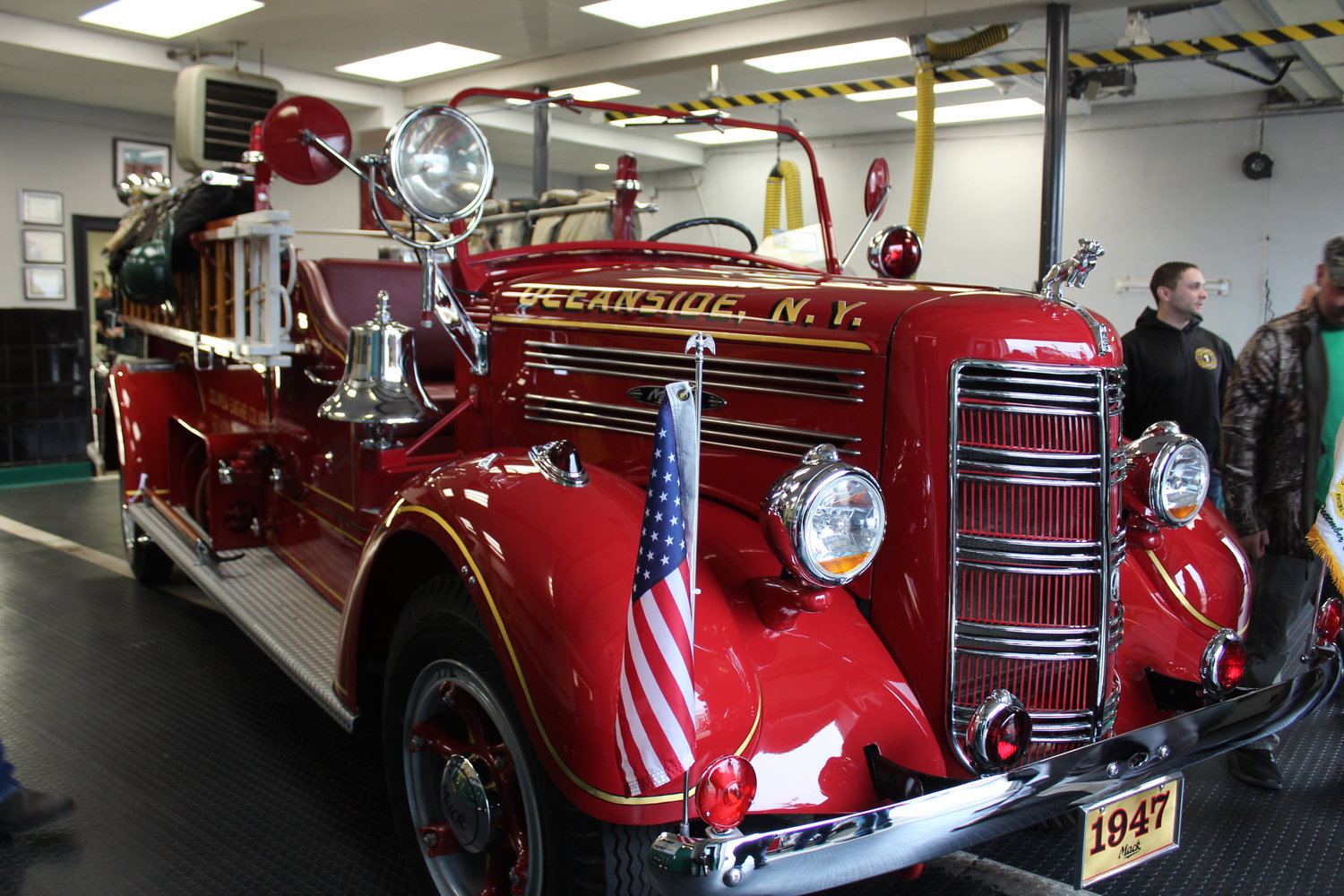 A model of power and resilience, the 1947 Mack truck has served its purpose dutifully for nearly a half-century fighting fires, and can finally rest at the Columbia Engine Company No. 1 station.
Karina Kovac/Herald 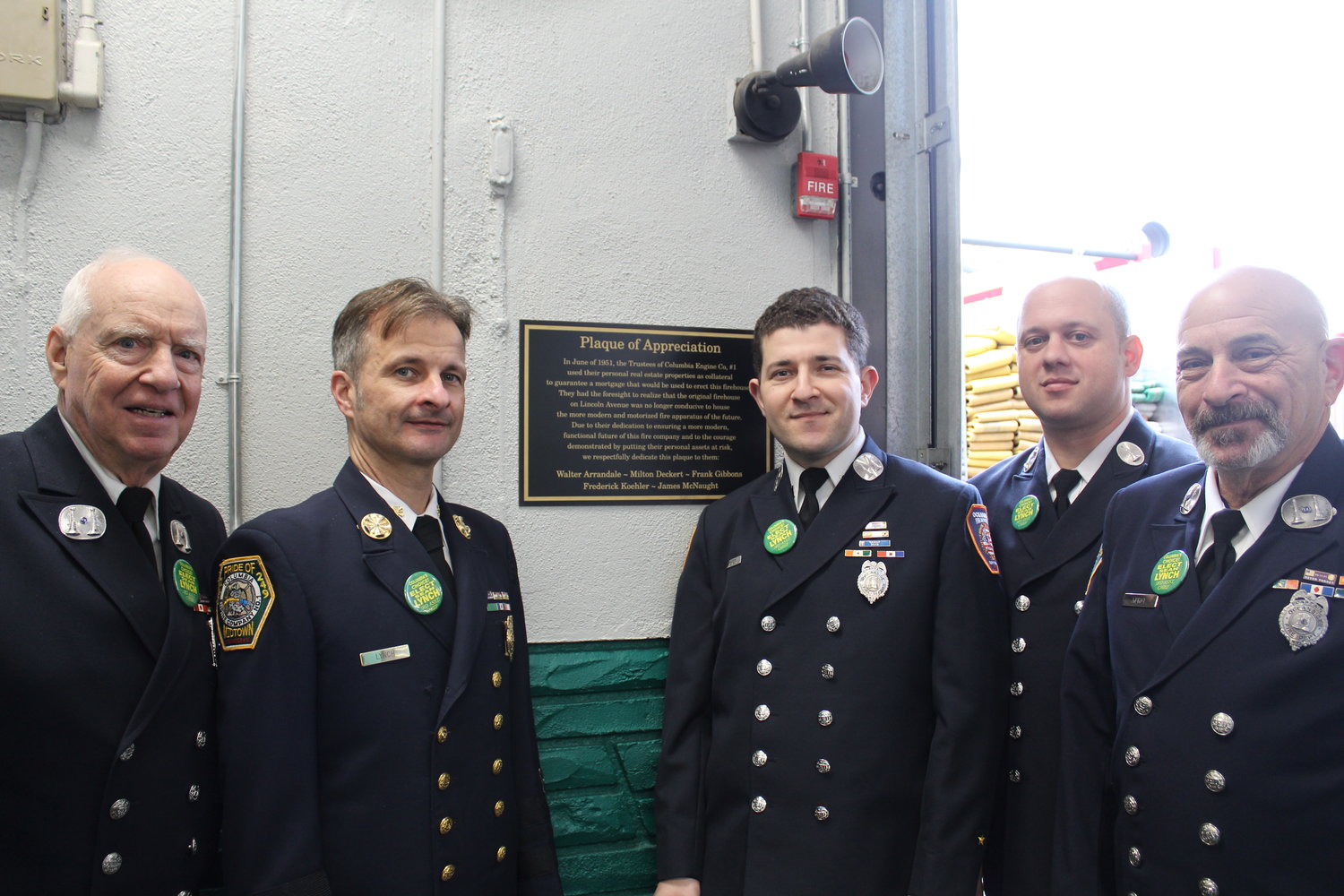 Members of the Oceanside Columbia Engine Company No. 1 historical committee in front of their new Plaque of Appreciation for the five members who, in 1951, mortgaged their houses to build the fire station.
Karina Kovac/Herald 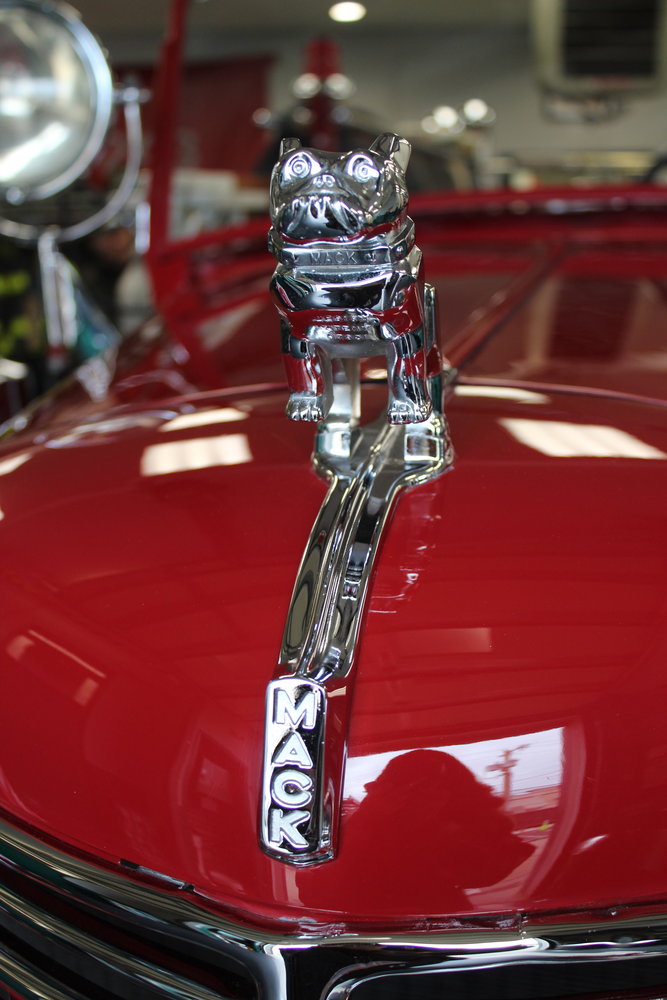 The iconic Mack bulldog, a symbol of strength, power and durability.
Karina Kovac/Herald
Previous Next
By Karina Kovac

It was a symbol of strength, power and durability.  The 1947 Mack Model 45S was a pioneering apparatus at the time, and was heavily used in efforts by fire stations across the country to fight blazes — including right here in Oceanside.

But this particular Mack truck has returned to the Columbia Engine Company No. 1 after crossing many miles of America and undergoing years of restoration.

It was a journey that started simply enough 16 years ago with senior members of the fire department — Bill Lynch, Paul Facella and Fredrick Robinson — reminiscing about fire engines of yesteryear. The 1947 Mack was quite high-tech for its time because of a booster reel used to easily drench the many grass fires in the salt marshes of Oceanside.

It was then they came up with an idea: Let’s track down that old truck the Oceanside fire department replaced in the late 1950s that had, up until that moment, been lost to obscurity.

It was the kind of investigation that would make even Sherlock Holmes proud. Forming a historical committee, the three followed clues that led them through fire departments not only Bohemia an hour away, all the way to central Florida with the Highlands Volunteer Fire Department.

“We found out they had decommissioned this truck in Florida, and it was sitting idle, they didn’t know what to do with it,” Facella said.

When some history-minded firefighters from Long Island came knocking, however, the Citrus County firefighters knew exactly what to do: Offer the deal of a lifetime.

“Got it for a dollar,” Facella said — something Lynch added they haven’t even paid yet.

Their investigation produced a fascinating journey for the Mack truck that spanned more than four decades of active service.

“It was ordered in ‘46 right after the war, and built in ’47,” Facella said. The engine “served 12 years here in Oceanside, and then went to Bohemia.”

There, the engine lasted another 14 years before making its way to Florida around 1973.

“It served, in total, about 40 years of service in the fire service,” Facella said. “Which is a long time for a truck.”

None of the historical committee ever used the truck, but Karl Thuge was more than familiar with it.

In fact, there was a time when the now-94-year-old would sell trucks just like it for Mack, and even worked in the Long Island City factory where the truck were assembled.

In fact, he swore by the trucks, even serving as chief of the Lynbrook Fire Department for 20 years.

When this particular Mack returned to Oceanside, its age was showing. It would take five years to get it back into shape.

“It was a complete restoration,” Lynch said — all completed by Richard Partridge Jr., at his Rescue Vehicles shop in Bohemia, producing yet another homecoming.

“The body work was done, the paint work was done, it had no lights on it, didn’t run didn’t drive,” Partridge said. “So, all the important things” needed work.

The Mack was only the second antique vehicle Partridge had worked on to that point, but he wasn’t nervous. He knows what he can do.

Still, seeing the final touches — period-accurate helmets and the dedication plaque — was “unreal,” he said.

“The final touches really bring it all together,” Partridge added. “It was a pleasure working with those guys. I’m looking forward to the next project.”

The station’s new mascot has done wonders to boost morale there, Facella said.

“It means a lot to the company,” he said. “The history means an awful lot to the guys. It makes the guys feel good, and it’s a nice parade apparatus.”

In addition to the Mack dedication, the firehouse had a new plaque installed dedicated by the historical committee in honor of the five trustees who, in 1951, mortgaged their houses to build the current Smith Street station.