Heroes given scholarship from Mount Sinai 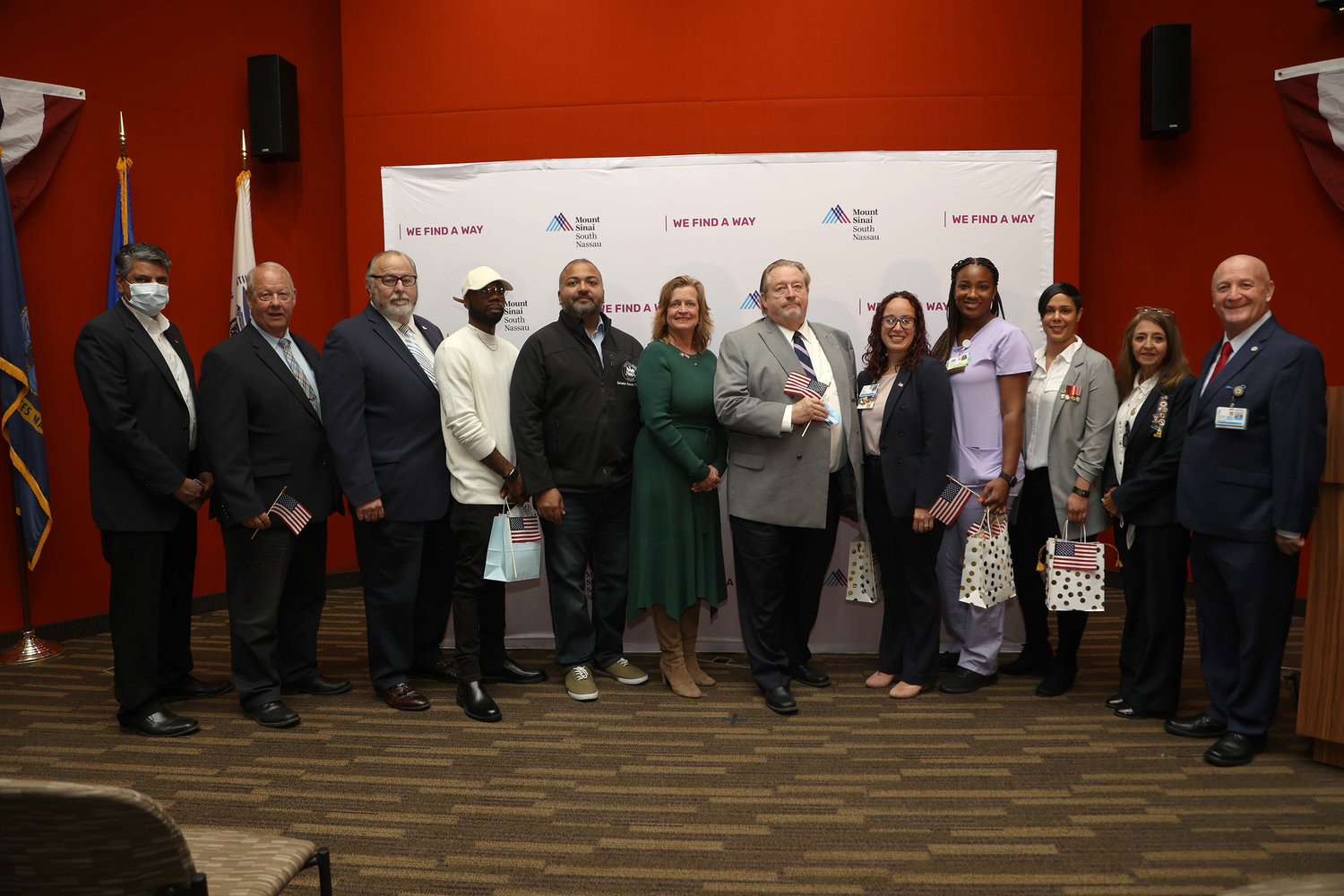 In honor of Veterans Day, Mount Sinai South Nassau presented the hospital’s Employee Veteran’s Scholarships to four staff members who served in the military and are continuing their education in the health care field.

Suheil Genovese, a project manager; Tandilaya Rice and Kuwary Torrens Negron and Rashawn Michael James, students at the Mount Sinai South Nassau Robert J. Hochstim School of Radiography, each were presented $1,000 scholarships in recognition of their service to our country. Mark Baron, President of Parking Systems, made a $2,000 donation to match the hospital’s $2,000 scholarship fund.

“We have found that veterans make a great addition to our staff. They are motivated to serve and work as a team to provide care to our patients and to our communities,” said Adhi Sharma, President of Mount Sinai South Nassau. “This ceremony is one way for us to show them how grateful we are for their service and the sacrifice that they made to protect our nation and its citizens.”

Born in Lares, Puerto Rico, Genovese is a veteran of the U.S. Army. She enlisted in May 2007; attended basic training at Fort Jackson, North Carolina; trained as a unit supply specialist at Fort Lee, Virginia, and ultimately became a supply sergeant.

During her military career, she participated in Operation Enduring Freedom in Afghanistan, serving as a unit supply specialist in a military police company and working in conjunction with the 10th Mountain Division and the 4th Infantry Division to secure and maintain major tactical and supply waypoints during her first deployment in Kandahar, Afghanistan.

At the end of her first deployment, she earned the Afghanistan Campaign Medal, National Defense Service Medal, Overseas Service Ribbon, Army Achievement Medal, and Army Commendation Medal. She was promoted to sergeant in Bethlehem, Pennsylvania, in 2012, and then transferred to Shoreham, New York, to serve as unit supply sergeant until June 2015, when she finished her contract with the Army.

A resident of Oceanside, Genovese joined Mount Sinai South Nassau in 2014 and currently serves as an assistant to the Nurse Manager/Project Manager for Nursing. She is enrolled in the University of Phoenix Project Management Certificate program, with expected graduation in February 2023.

In April 2014 Negrón, a resident of Oceanside, joined the U.S. Marine Corps. She served honorably for eight years, four on active duty and four in the Reserves. During her active-duty service, she spent three years in the First Marine Division-Headquarters Battalion where she worked in logistics as a management specialist. She was then moved to Okinawa, Japan, to serve as the Management Chief for the Third Medical Battalion – Third Marine Logistics Group.

During her time in the Reserves, Negrón successfully applied to join Team Rubicon and served as its Puerto Rico Logistics Coordinator until December of 2021. Founded in 2010, Team Rubicon is a nonprofit organization that uses the skills and experiences of military veterans working alongside first responders and government agencies to rapidly deploy emergency response teams across the United States and around the world to provide immediate relief to those impacted by disasters and humanitarian crises.