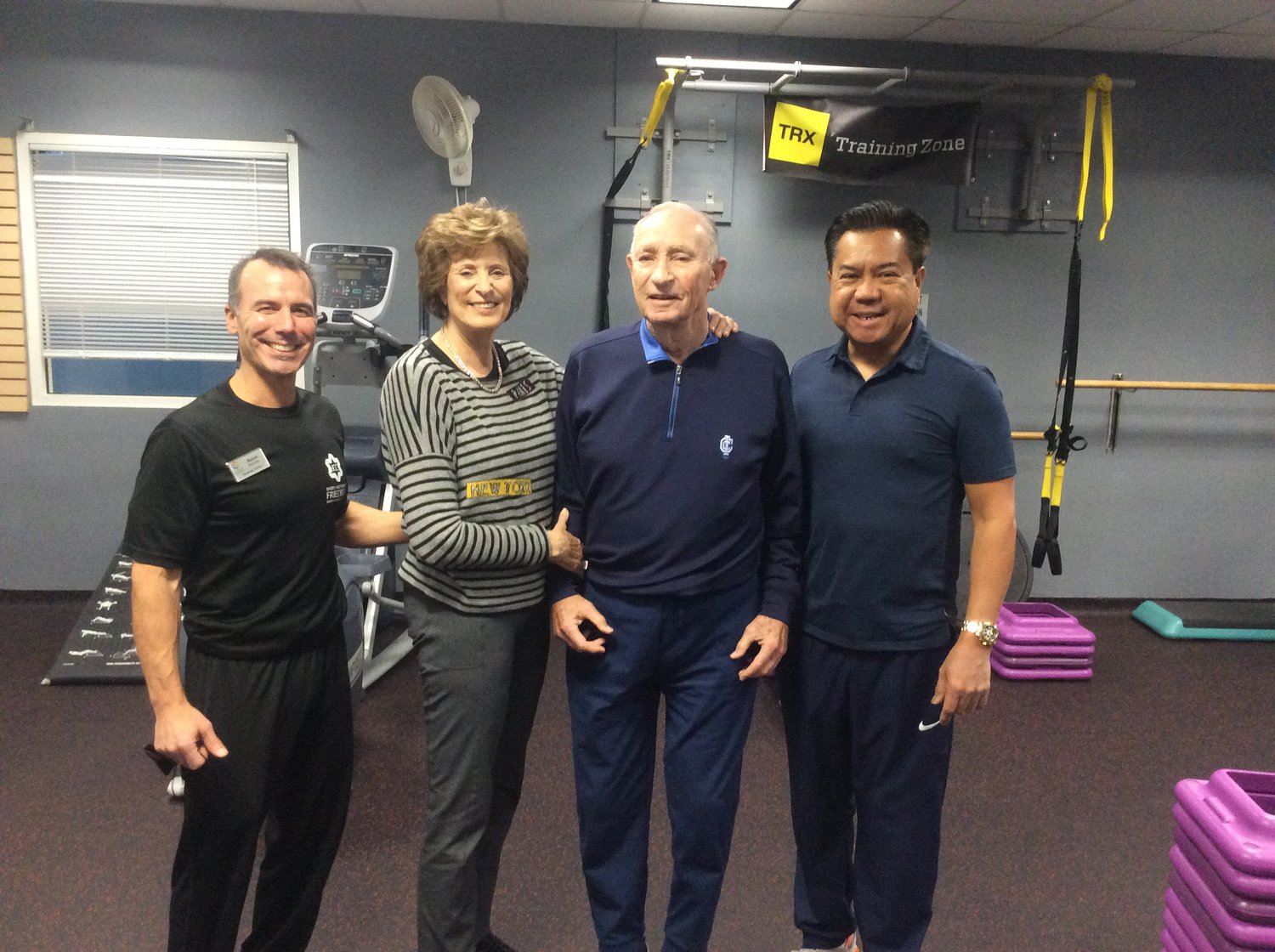 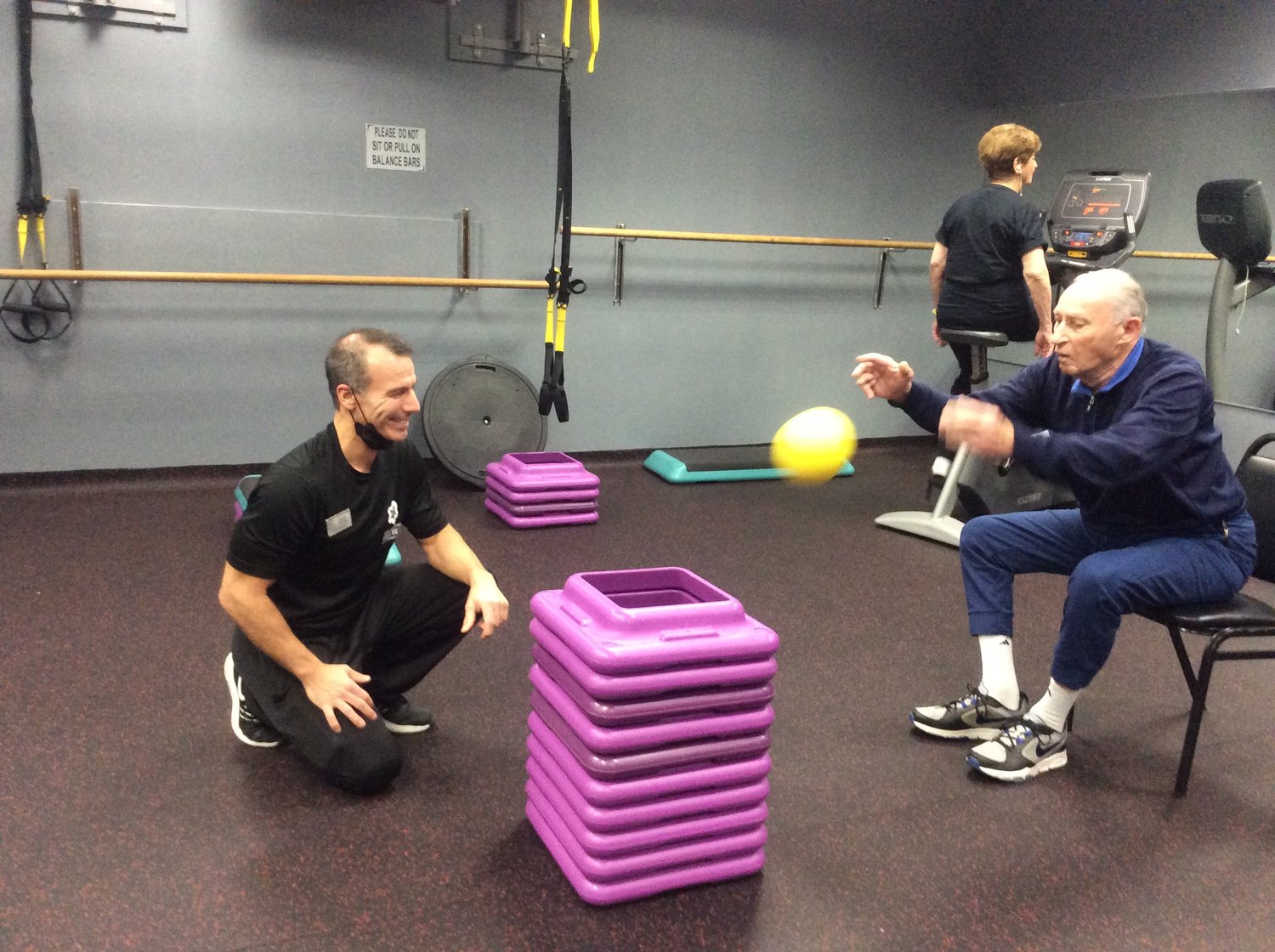 One of the reflex exercises that Armand does involves tossing a ball with Perrotta.
Kepherd Daniel/Herald 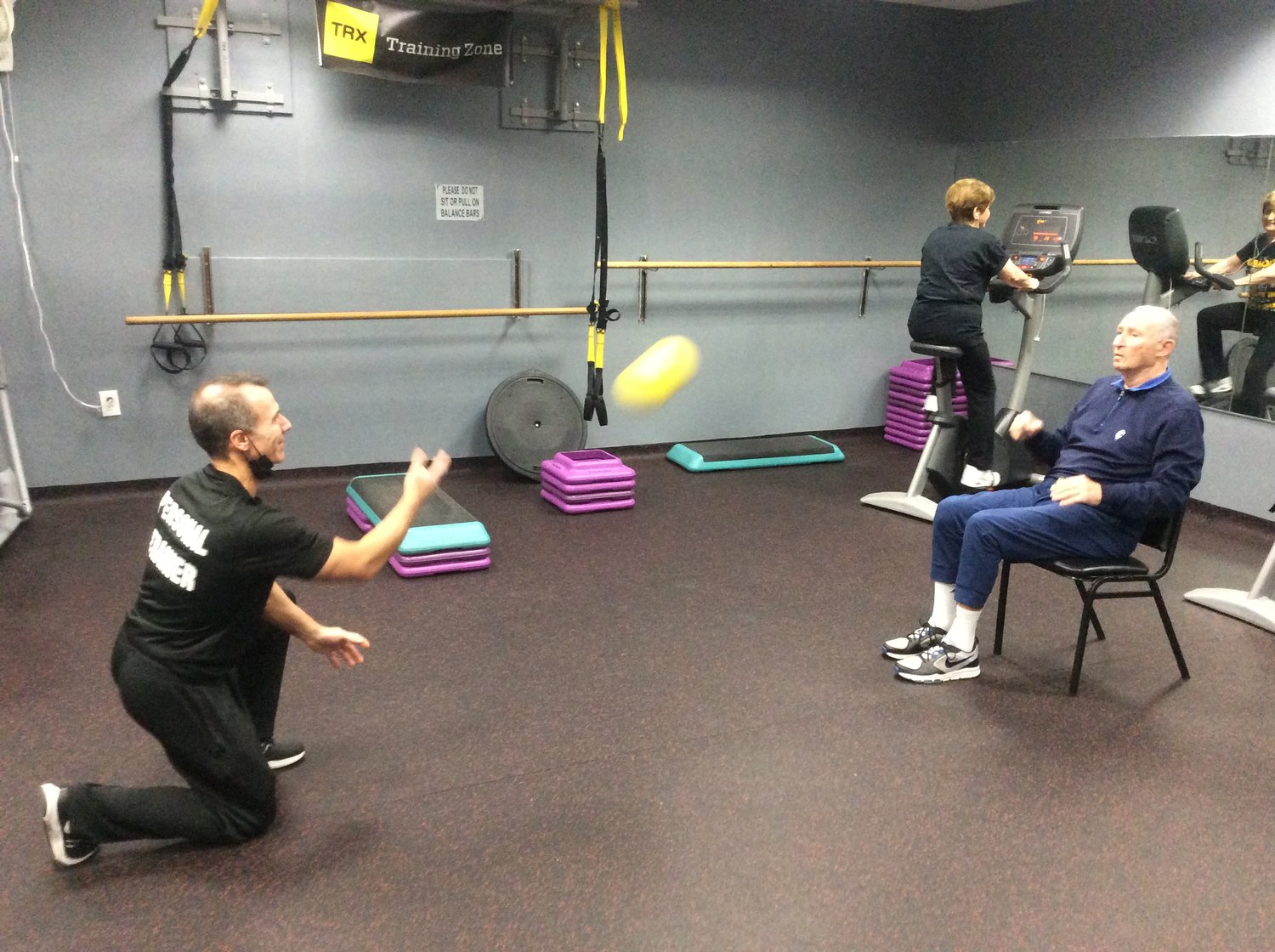 Rocco Perrotta and Armand Lindenbaum ran through a resistance workout, for which Perrotta exerts multiple pounds of pressure with the band.
Kepherd Daniel/Herald 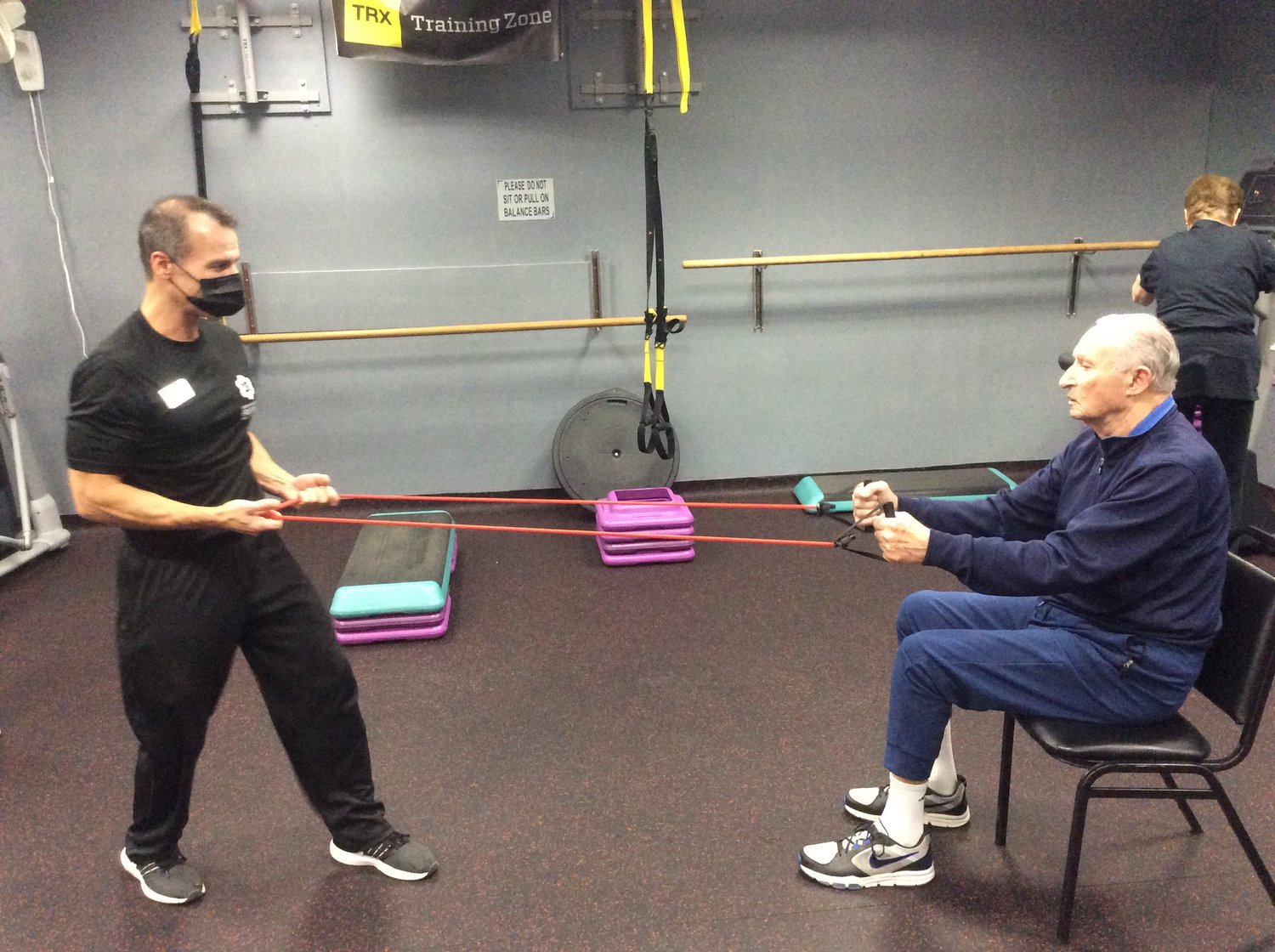 To start his workout at the Friedberg Jewish Community Center in Oceanside, Armand Lindenbaum, 83, pedals three miles on a stationary bike, something that he did not have the stamina to do a few months ago.

In 2013, Armand was diagnosed with Alzheimer’s disease, which leads to severe memory loss. As the disease worsens, those suffering from it might forget who they are and who their family members are. It can even affect one’s motor skills, crippling the ability to move.

Armand began training at the JCC in 2019, and four months ago with JCC personal trainer Rocco Perrotta. Since then, Perrotta said he has seen incredible improvement in Armand’s physical and cognitive health. “I tried to envision what he needed a few months ago,” Perrotta said. “He didn’t communicate well, but now he will read signs on the walls. His reflexes have improved phenomenally. His motor skills have improved significantly.”

After a warm-up, Armand performs strength exercises using resistance training. “I also like to include tasks to help Armand with his reflexes and hand-eye coordination, as well,” explained Perrotta. “Armand is also communicating better.”

“In the beginning, Armand wouldn’t and actually couldn’t respond well to basic questions like, ‘How are you feeling today?’ He would have a blank stare and not respond. Lately, though, Armand is responding to a variety of questions, plus his verbal skills have increased, and even verbalizes questions of his own. Armand has become more alert and more aware of his environment. He seems to have more focus on both people and objects within his surroundings. There are many times Armand will take notice, and is able to read some of the signs that hang on the fitness center.”

Many in the JCC have started to notice that Armand is trending in a positive direction. “He’s terrific.” said one woman, observing Armand’s workout with Perrotta. “I’ve been watching him for, I don’t know how long, and he’s come so far. It’s really something.”

Armand’s caretaker, Michael Alunan, discussed the activities that he does with Armand to keep him engaged. “His attention span is very short, so I have to keep him moving with a lot of different things,” Alunan said. “We play Legos and do coloring books to keep Armand engaged. We play ping-pong, dance, listen to music, anything that he’s interested in,” Alunan said.

Armand and Alunan also play miniature golf together. Over time, however, Alunan began to notice Armand’s conditioning decline. “We would play ping-pong every day, and I noticed he was getting tired quicker and quicker after about five minutes.” Enter his new training regimen.

Armands’ wife, Jean Lindenbaum, 75, has seen a huge improvement in his overall health and condition. “There’s no question that he has become more alert,’’ Jean said. “Since he started to work with Rocco, he’s more talkative, he’s more aware. All this is unbelievable.”

Armand was a member of the City Athletic Club in New York City. He played squash four times a week in the season, volleyball and, when he was younger, basketball. Jean also discussed how Armand was a terrific skier and skied until four years ago, but he had to stop because of concerns his family had about his balance.

Jean found out about Armand’s disease when he went into a clinical trial. It was discovered that Armand had a risk gene associated with Alzheimer’s disease. Armand’s mother had Alzheimer’s, and his sister, who is 89, has dementia.

“They say Alzheimer’s is there 20 or 30 years before diagnosis. I think he had it way before he was diagnosed” Jean said. “He stopped doing the exercises that he did religiously. I didn’t realize that he didn’t remember to do them.”

Jean and Armand met and started dating when she was 18 and Armand was 26. As well as being an active athlete, when Armand was younger, and before he was diagnosed with Alzheimer’s, he worked in real estate and was an active investor. When Jean and Alunan found out about the JCC, they believed it was the perfect place for Armand to exercise. Jean and Armand lived in New York City, but moved to their summer home on the island for the ease of commute to be able to access certain programs that Armand needed and the JCC dementia program.

Pam Jaffe, the JCC’s director of dementia programs, said, “Our day program gives care partners a break and allows for a day of stimulation. We have days for people who are in the early stage and those who are more moderate like Armand. We come together for activities like music, art, chair yoga and tai chi. We partner with others like the Long Island Museum in Stony Brook for a program geared specifically for people living with dementia. It’s an enriching day, and people can come together.”