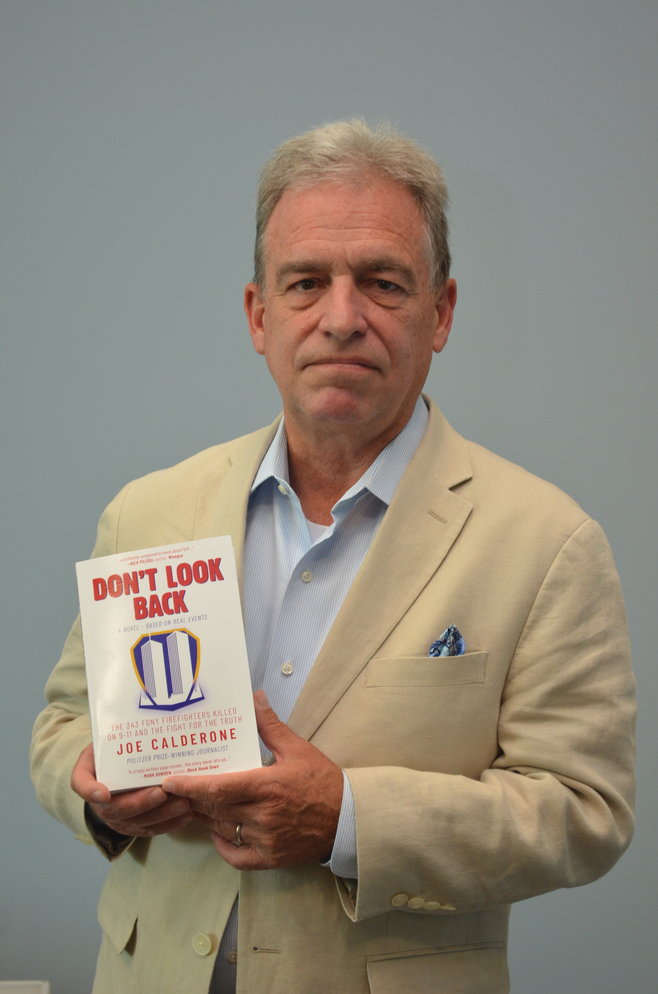 Former newspaperman Joe Calderone has published his first book, “Don’t Look Back,” taking a fictional view of the Sept. 11 terrorist attacks on the eve of their 21st anniversary.
Tim Baker/Herald
By James Bernstein

It took 10 years and 20 rejections, but Joe Calderone never gave up.

And how fortunate, because he’s now celebrating his first book, “Don’t Look Back.” It’s a work of historical fiction about one of the worst days in American history, the terrorist attacks of Sept. 11, 2001.

“It took many rewrites,” Calderone said. “I had to buy a whole new cabinet to hold the rejections.”

Calderone spent years as a reporter for Newsday, but the Floral Park resident can now be found in the public relations office at Mount Sinai South Nassau hospital in Oceanside. Two decades ago, however, Calderone was at the Daily News, covering the New York City Fire Department, routinely reporting on what would generally be stories about fighting fires or responding to accidents.

On Sept. 11, he found himself writing something much different.

Before that Tuesday ended, an unimaginable 343 firefighters would be lost as two hijacked commercial airliners slammed into the World Trade Center towers in downtown Manhattan, eventually toppling them in clouds of dust and debris. In all, 2,977 people were killed there, along with 184 at the Pentagon in Washington, and 40 on a hijacked commercial jetliner that crashed in a Pennsylvania field.

“I covered the family organizations that were formed,” Calderone said. “I spent time with them.”

“Don’t Look Back” focuses on the firefighters who rushed into the burning towers, their lives, and their sacrifices.

Calderone didn’t make it to what would eventually be called ground zero until the day after, since that part of Manhattan was locked down in the attacks’ aftermath. In the years since, he had developed many sources among firefighters, getting to know their families as well.

“I felt what had happened to the firefighters and their families has never fully been told,” said Calderone, who is now slightly graying at 56, but still filled with the thrill of writing.

“Congress’s 9/11 Commission did a good job looking at the situation nationally and internationally.”

But he pointed out that the commission also discussed in detail New York City’s oft-failed emergency response due to poor radio transmissions. “I took that chapter to bring that part of the story to life,” Calderone said.

His fictional characters in “Don’t Look Back” are based on the people he met before, during, and after the destruction of the towers.

The grim memories have never left Calderone, so though so many books have been written about the tragedy, he felt it was necessary to write yet another as its anniversary approached.

But unlike those other stories, Calderone focused on why so many firefighters were lost that day: inadequate — and in some cases, non-functioning — radio communications.

That was something addressed at length by the 9/11 Commission in the months following the attacks, as it examined unclear protocols on how transmissions were to be acknowledged, and questioned whether some firefighters even received those messages at all.

No one will ever know how many of those lives could have been saved if firefighters had been able to communicate with one another, Calderone says. But he knows with certainty there were some.

“I got into the city that night,” he said, by jumping on a train to Long Island City. But getting from there to the trade center site wasn’t easy, since just about every mode of transportation had ground to a halt. Calderone arrived at what came to be known as “the pile” the day after the attacks.

“I made the fire department a part of my beat” after that, he said. “It was an incredible time. One day I would be interviewing the mayor, and the next a homeless man.”

Calderone honed in on his book over the next decade, while holding down his public relations job at the hospital. “It took many re-writes and drafts,” and endless rejections.

He devote hours each night and nearly every weekend to the project. In the end, he believes he’s been successful “in getting inside the heads of the firefighters.”

“Don’t Look Back” tells of a fictional officer-in-training named Peter Murphy, a U.S. Marine-turned-firefighter who hops on a fire truck headed toward the trade center. On the way, he sees smoke from one of the buildings. Although they are nervous, Murphy and the rest of his unit, packing up to 75 pounds of gear each, rush into the burning south tower and climb more than 20 flights of stairs before coming upon a man in a wheelchair. They know they need to get him out, even though he easily weighs 200 pounds.

Murphy and his three comrades slowly work the man down the stairs.

Meanwhile, Murphy’s parents are sitting in their Bronx home watching the television news in horror, knowing their son is there.

Murphy eventually gets the wheelchair-bound man down to the 10th floor before the stairway gives way.

“All that was later found of Peter Murphy was his crushed probie helmet,” Calderone ends this chapter in his book. The young firefighter was dreaming of marrying and buying a small house on Long Island.

It’s just one story of several in “Don’t Look Back,” taking a fictional view of events that almost seemed too impossible to be real.

“Don’t Look Back” is published by Post Hill Press in Franklin, Tennessee, and is distributed by Simon & Schuster. It’s available on Amazon, and at Barnes & Noble.

“I hope we approach the 21st anniversary with the sense that there are still lessons to be learned about safety,” Calderone said. “And I wanted to tell the stories of the families.”