Tax impact to be detailed further in September 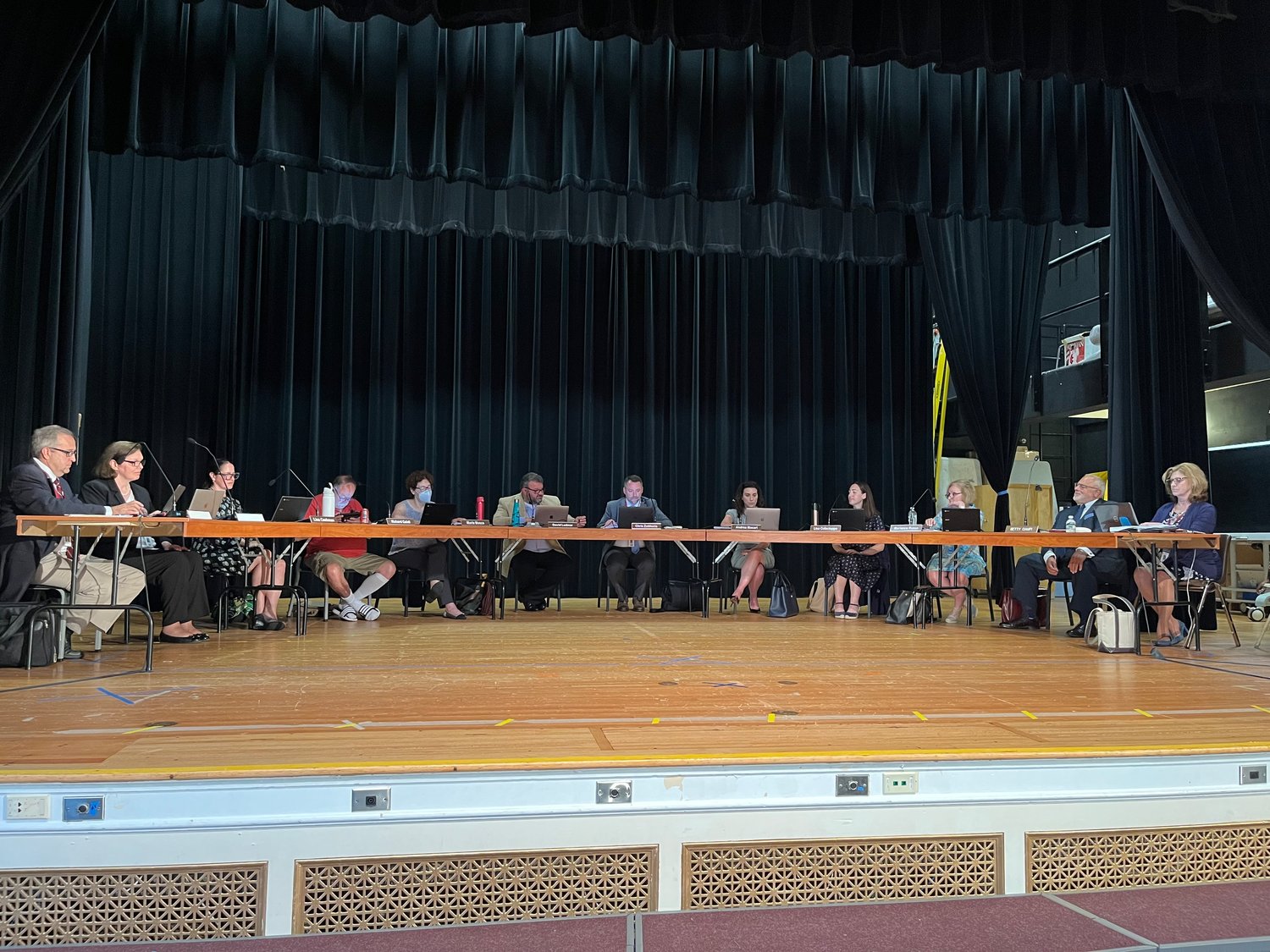 The North Shore School District Board of Education held a special meeting to discuss the raising of the tax levy on Aug. 4.
Will Sheeline/Herald

I was hoping to do less — I was hoping to be able to incorporate a budget cut now, and was disappointed to learn that we couldn’t do that.”
Dave Ludmar, president, Board of Education
By Will Sheeline

The North Shore School District announced, and then voted in favor of, an $86 million tax levy for the 2022-23 school year.
As anticipated, it will represent a substantial markup from past year’s tax levy due to the settlement with the Long Island Power Authority. The settlement, which was announced on July 1, marked an end to the longstanding legal dispute between LIPA and the school district, as well as a significant drop in school revenue.
The school district received roughly $2 million from LIPA as part of the settlement, and can expect to receive an approximately $1.25 million more in future payments this year. Even so, the loss of yearly revenue from the settlement will still hit the district hard. Because LIPA’s annual payments will continue to decrease in the coming years, the district is ultimately facing a loss of $29 million a year.
The levy will be used to help offset the loss in annual revenue from the LIPA settlement, although even with the increased levy this will represent a significant loss of money for the school district.
Chris Zublionis, the district’s new superintendent, highlighted the fact that since taking office in early June, he and the new assistant superintendent for business, James Pappas, have been working to understand the unique issues the school district faces. Zublionis explained to attendees at an Aug. 4 special meeting that the work he and Pappas have done has largely been familiarizing themselves with the minutia of finance and tax collection, to better chart a path ahead for the district.


“The way we characterized our work this month was in ‘mountains of clarity’ and ‘mountains of cost,’” Zublionis said. “Mountains of clarity were ones which they could find answers to themselves while, mountains of cost will be questions — mountains we need to climb for several years.”
Zublionis and Pappas said the mountains of clarity covers everything from the different ways taxes are collected in the district, to the differences between direct assessments and PILOT payments.
Pappas explained that the annual funds lost due to the settlement will need to be picked up by the four “classes” of taxpayer in the community. These classes refer to the types of properties held by taxpayers, with class one being private homes, two being co-ops and condos, three utilities, and four commercial properties.
“To simplify, it will be funded by a shift of the tax reduction to the remaining taxpayers within the other classes,” Pappas explained at the special meeting. “That is not the only fashion, because in the long-term there will be a plan in cutting costs, as well as increasing revenues wherever we can.”
It is currently unclear how much will be paid by each of the four classes at this time, as the amount is determined by Nassau County, rather than the district itself. This will be done based on the adjusted base proportions, which is how the county assesses taxes based on class and will be made available to the district some time in early September.
Before the Board of Education voted on the tax levy, however, they first had to decide how much of the $2 million direct payment from LIPA would be used to offset the levy for the first class, private homeowners. After discussing the pros and cons of using more or less funds, with some suggestions as high as $1 million and some as low as $350,000, the board approved a figure at $500,000 in a vote of 5-2 with trustees Marianne Russo and Richard Galati voting against it.
Dave Ludmar, president of the board, maintained that this was the right amount. It would allow them to offset the cost for residents while still providing the community with a financial parachute down the line, as the amount LIPA will be paying to the district will continue to decrease annually over the coming years, until reaching the $29 million mark.
“I think for me $500,000 does seem like the sweet spot. I was hoping to do less — I was hoping to be able to incorporate a budget cut now, and was disappointed to learn that we couldn’t do that,” Ludmar said before the vote. “I think the point that was made about the longer-term impact of not being able to pass budgets that was raised by multiple trustees was a huge one, and that can have a much more deleterious impact on our schools.”
Report an inappropriate comment