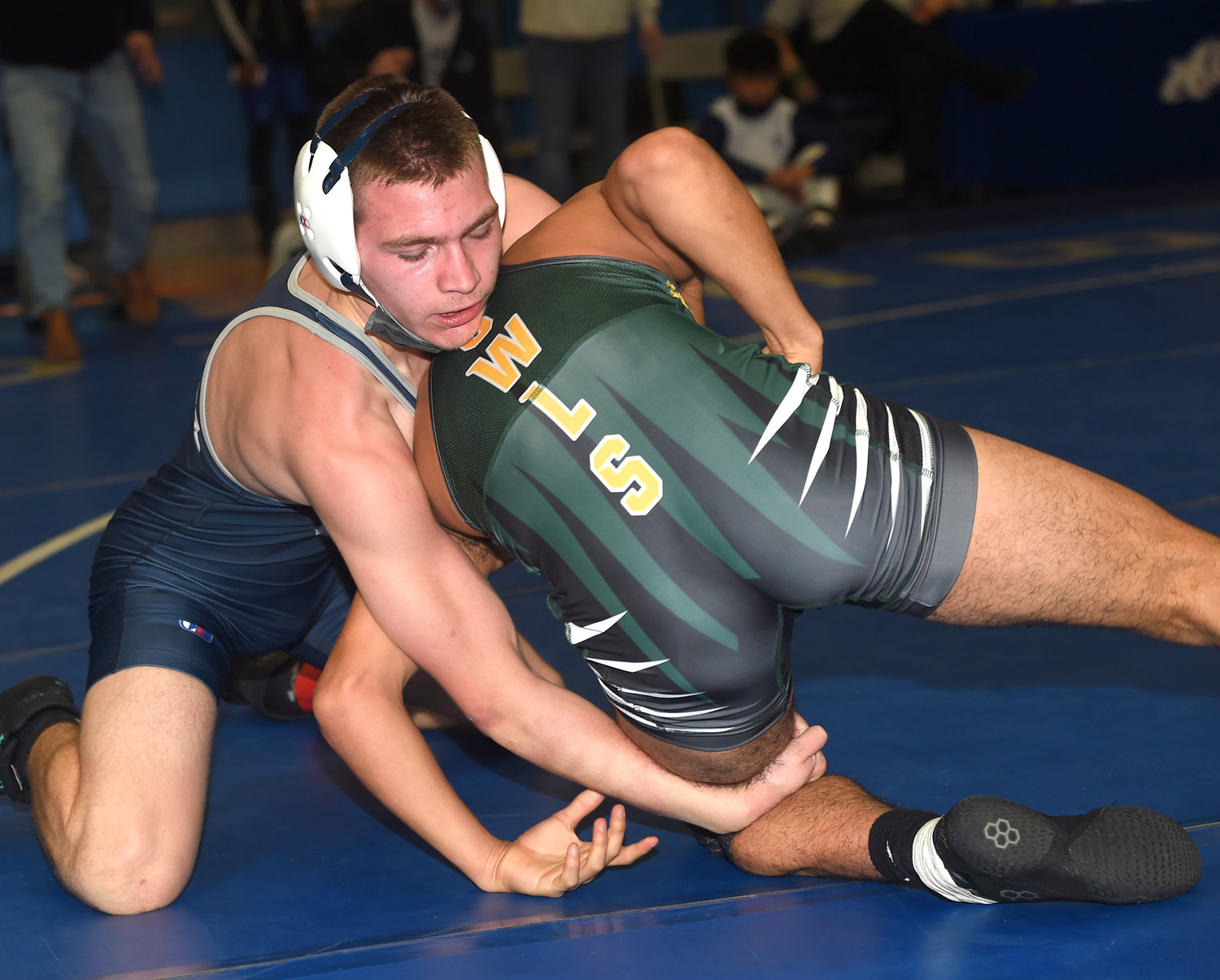 Oceanside's Hugh Bittenbender, left, had a solid showing in the Long Beach Tournament at 138 pounds to open the campaign.
Donovan Berthoud/Herald
By Garrett D. Uribe

Oceanside wrestling coach Julio Flores prefers keeping a lid on any Sailors super weapons.
“I don’t want guys early on coming after my kids,” the ninth-year skipper said.
But once-in-a-generation accolades tend to undermine efforts at stealth.
When unseeded senior Hugh Bittenbender won Most Outstanding Wrestler at the Frank Giampaolo South Side Cyclone Tournament Dec. 18 – becoming the Sailors’ first MOW in 20 years as the tournament’s 138-pound champ – Flores’ team blew any shot at evading opponents’ radar, and the coach spoke freely.
“I really think these boys have what it takes to be conference champions,” said Flores, whose team has ricocheted off a 1-3 spring to lead Nassau Conference 1B at 2-0 (3-0 overall). “That hasn’t happened at Oceanside since 2004, and we plan on changing that this year. Our lineup looks really good.”


Junior Cole Parker (152 pounds) and senior Johnathan Beitzinger (145) join Bittenbender as All-Conference returners for Oceanside. Ranked sixth in Nassau at 138 by the Long Island Wrestling Association, Bittenbender has started 2-0 in dual meet matches, winning by pin and technical fall. “Hugh’s growth has been incredible,” Flores said. “He put in extra work and became a monster out there. At the [Giampaolo] tournament he went in unseeded, and just started walking through everybody.”
Oceanside freshmen Jake Strianese and Jared Marine got as far as the finals at Giampaolo at 102 and 172, respectively, while Sailors senior Matt Maldonado won the tournament’s consolation title at 285. Strianese, wrestling at 110, has started 1-1 in duals, while Marine has recorded pins in both of his dual matchups.
“Jake improved a lot in the offseason,” Flores said of the underclassman who took fifth place at the Battle at the Beach Tournament at Long Beach Dec. 4. “Jared’s wrestling very well. He’s not hesitant to take on anybody. These kids are the future of Oceanside wrestling.”
Regarding the Sailors’ immediate future, one matter looms unresolved: An embarrassment of riches at heavyweight has set up a duel for the starting spot. As Maldonado (0-1 duals) ramps up from being sidelined in spring, junior Peter Staltare (285) has impressed in his first season on the mat, going 1-1 in duals with a pin against Hempstead’s Juan Garcia Dec. 14. “Matt’s working to get back where he needs to be,” Flores said. “Peter looks good and learns quick. Those two are going to wrestle off for the spot.”
An absence in spring doesn’t seem to have impeded 215-pound junior Andrew Cagno, who along with senior Zach Weicher (118) has gone 2-0 in duals for Oceanside, while sophomore Dan Gilmore has started 1-1 at 132 with one pin. “Andrew’s very scrappy, an amazing wrestler,” Flores said. “Zach is very reliable and we’re happy to have him. Dan’s got a motor that doesn’t run out of gas. We love that.”
As to plans of keeping a low profile, Flores was resigned. “I guess the cat’s out of the bag,” he said. “We have some good kids. With everyone healthy, I think we’ll make a run.”