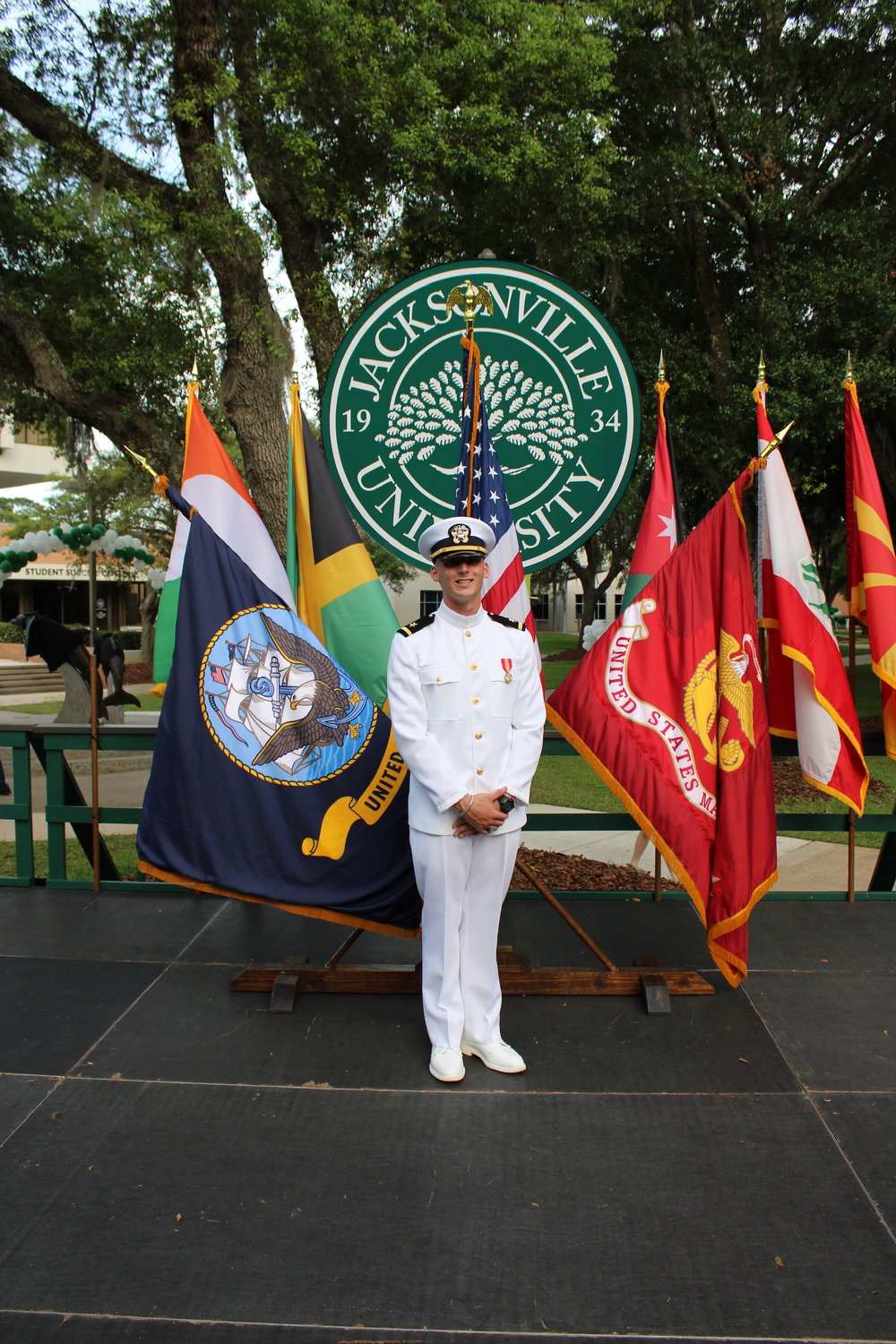 Liam McGuinness faced a long road to achieving his dream, including a neck injury, but he finally became a commissioned naval officer in May.
Courtesy Jennifer McGuinness 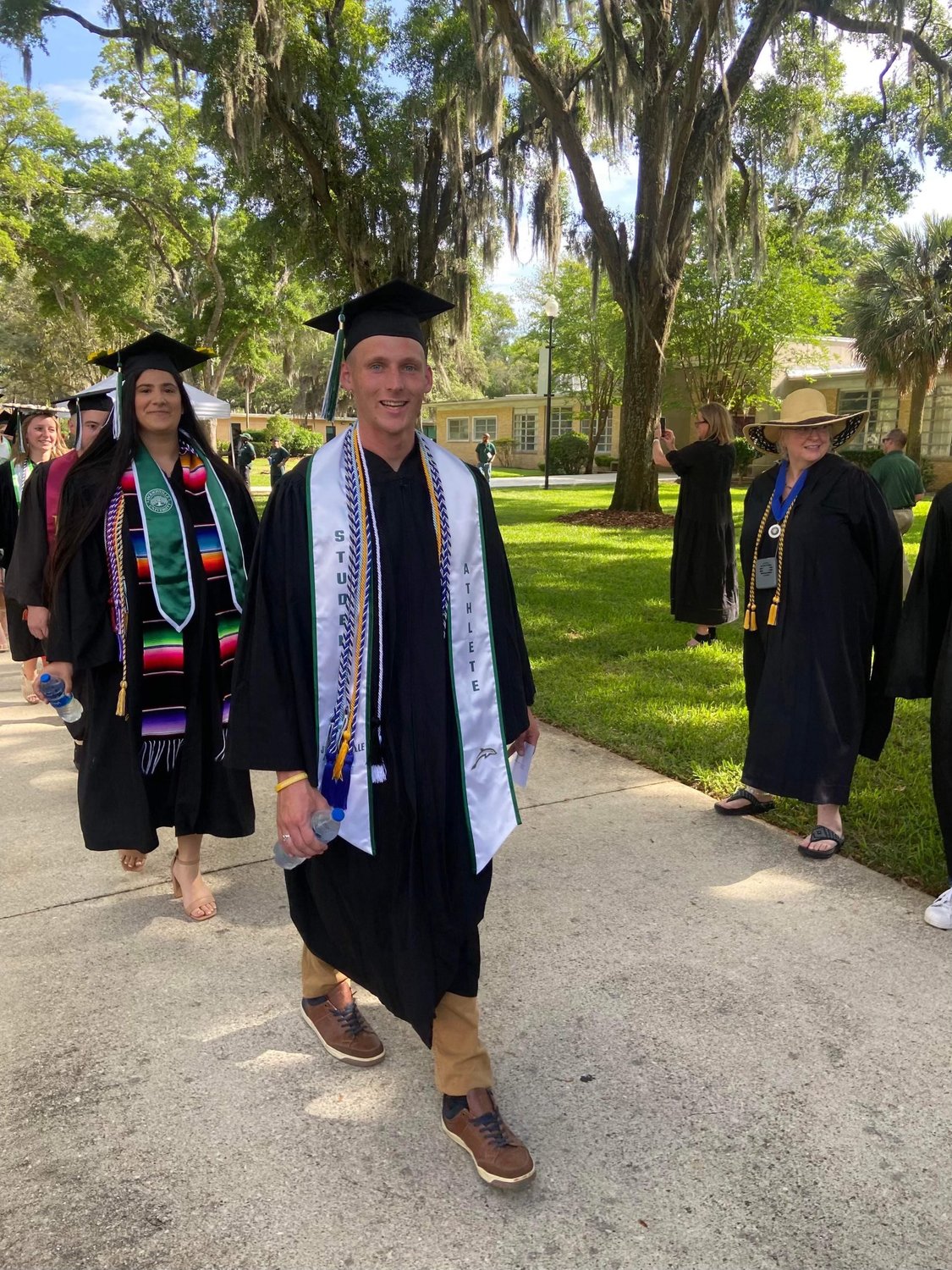 McGuinness never let anything stop him, having graduating from Jacksonville University with a degree in psychology while enrolled in the Naval ROTC.
Courtesy Jennifer McGuinness
Previous Next
By Taylor Nicioli

When he attended Oceanside High School, Liam McGuinness was very active with the football and lacrosse teams. He loved being on the field with his teammates, taking on a leadership role and making sure every game ran smoothly.

Off the field, however, he was more on the quiet side. Growing up, he was always described as a shy kid, but sports had proven to be his outlet, exactly what he needed to allow him to come out of his shell.

“He was so shy, but when he put on the football helmet, or the lacrosse helmet, he would all of a sudden take control on the field, moving players around and showing them where to go and what to do,” said his mom, Jennifer McGuinness. “We would say it was like his Superman helmet, because it changed him when he put that on.”

McGuinness was so dedicated to sports that even when facing constant neck pain, he pushed through it for his teammates. That was until his sophomore year when it all came crashing down. His coaches saw the pain McGuinness was enduring at practice, and they would not allow him to play for the rest of the season.

He visited many physical therapists, chiropractors and pediatricians, but no one could pinpoint the source of the pain. Despite their efforts to prevent the teen from undergoing spinal surgery, they determined it was the only solution.

“It had hurt me more that I couldn’t be out there on the field with my teammates,” said McGuinness. “I always did what needed to be done for the best interests of my guys. Not being out there with them really hurt, throughout the whole process.”

He underwent surgery in February of 2016, as doctors removed extra scar tissue that had formed throughout years of competitive playing, and fixed a pinched nerve they had discovered. Before the surgery, McGuinness continued to go to every practice for his teammates, even though he was unable to participate.

“His sports were something that he worked at and gave all his effort to at such a young age,” his mother said. “He swore he was going to go take it to the next level. When that was taken from him, it was just heartbreaking.”

The days during his recovery were long, but the surgery proved to be just what he needed, since his physical health had improved. As his senior year approached, McGuinness began to seek options for college. As early as elementary school, he knew he wanted to join the Navy, just like his uncle who served for 29 years. For this to become reality, he knew he would have to start putting in the hard work, and soon.

“That summer, I hit the ground running, and just said, ‘I got to do whatever it takes to build up my strength; strengthen my neck to support my body and to get rid of the pain as much as I can in order to accomplish this goal of mine,’” said McGuinness.

After he graduated in 2018, McGuinness attended Jacksonville University in Florida, where he majored in psychology. He had joined the Naval Reserve Officers Training Corps, a program that educates and trains qualified young men and women for service as commissioned officers in the Navy and Marine Corps. Since he thought he could no longer compete in sports, he was bent on fulfilling his lifelong goal of joining the Navy.

But his injury still stood in his way. To be considered for the Navy, McGuinness had to fight to receive a medical waiver. However, after many letters from his doctors and from his lieutenants explaining his physical excellence within his unit, McGuinness proved that his injury would not get in the way of his success.

He ended up playing sports again after all, joining his university’s division one men’s rowing team and leading his team to victory at the Southern Intercollegiate Rowing Association Championship of 2022. At graduation, McGuinness was one of two students who had been bestowed with the JU Brady award, presented to athletes that go above and beyond in all areas of competition and demonstrate a successful balance between academic achievement, student organization and intercollegiate athletic participation.

In May, McGuinness was commissioned into the United States Navy and is set to be a surface warfare officer next spring.

Through all of his struggles, McGuinness remembered his favorite saying: “Mindset is everything.”

“We all go through different challenges in life,” he said. “Whether people know what you’re going through or not, can be questionable. Being able to take the time to view situations and different perspectives, it allows you to understand the situation better, and it allows others to see that there are multiple ways to go about a situation that they may be facing.”