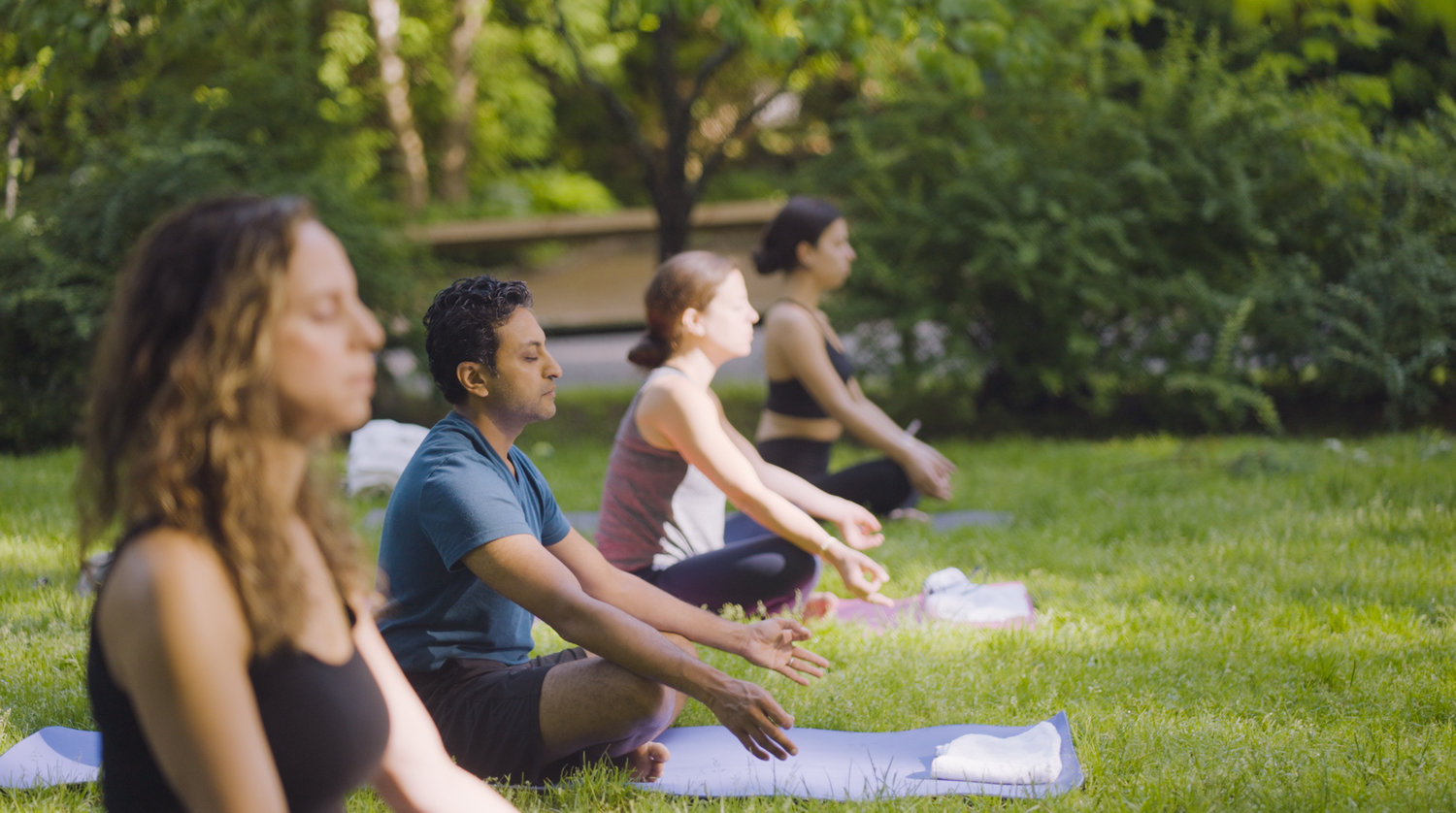 Deborah Krivinsky, from left, and Yogi Patel, both Sea Cliff residents, and Tina Roumas, of Glen Head and Rebecca Kraus, of Great Neck all partake in the Zen57 program.
Courtesy Helix & Gene
By Will Sheeline

Health and wellness are one of the fastest growing industries in the United States, as more and more Americans hope to take care of and better understand their bodies. One wellness center claims it does this in a way that’s both innovative and gets better results.
Helix & Gene has only had its doors open since last October, but it already has roughly 500 clients, some from as far afield as Israel. According to Tannaz Nasirzadeh Balooch, a member of Sea Cliff’s village board, who is the co-founder and director of coaching, expansion has been through word of mouth.
“I’d say we’re almost growing faster than we can keep up, it feels like I have to train and add new coaching staff every few weeks,” Nasirzadeh Balooch said.
Helix & Gene, located in Great Neck, uses DNA analysis to determine what type of workout and diet is best for the long-term health of their clients. Nasirzadeh Balooch’s uncle, who works in the genomics and biotech industry on the West Coast, convinced her and Sam Balooch, her husband, a physical fitness coach and co-founder and CEO of Helix & Gene, to incorporate this advanced testing into their programs.
To help with this, they brought in a client from their old yoga and fitness business to be a co-founder with them, Dr. Daniel Benilevi, an attending pediatrician at Cohen’s Children’s Hospital, Long Island Jewish Medical Center. Benilevi said he was intrigued by the idea of helping a wellness company.


“I brought some scientific legitimacy, and my philosophy towards diet is something they gravitated towards,” Benilevi, who is also Helix & Gene's President, said. “I don’t subscribe to the American Diet Association, I have my own philosophy towards how people should eat and deal with illnesses like obesity, based in scientific fact rather than the latest fads.”
Helix & Gene offers several health programs. “This is health and fitness DNA testing, which tells you things like what vitamins are you genetically deficient in or what vitamins is your body unable to produce,” Nasirzadeh Balooch said. “Because genetically that’s how you’re predisposed, what we’d call your genetic blueprint. What type of exercise best fits your body and, one of my favorites, what is your macronutrient need based on your genetic breakdown.”
In addition to their fitness and weight loss programs, Helix & Gene also has a more meditative associate program, called Zen57. Zen57 was developed by Balooch and one of their coaches at Helix & Gene, Matt Fried, and uses physical movement to try and enhance mental and spiritual awareness.
“What we do is, it’s a form of physical training to awaken the nervous system, and thus increases the feeling of connection with your body,” Fried said. “So it’s really much less of a work out, and more of a work in, if you will.”
The owners of Helix & Gene have expressed amazement at the community response to their various programs, claiming they have roughly 500 clients.
One customer who went through their Wellness40 program, Daniel Flanzig of Sea Cliff, said although he had tried other workout and health programs in the past, this was the first one which he felt worked in the long-term.
“I think it’s a really great program in terms of regarding the ability to sustain and manage yourself afterwards,” Flanzig said. “I think you really realize how much less foods, really unhealthy foods, you need. That part is huge.”
Report an inappropriate comment