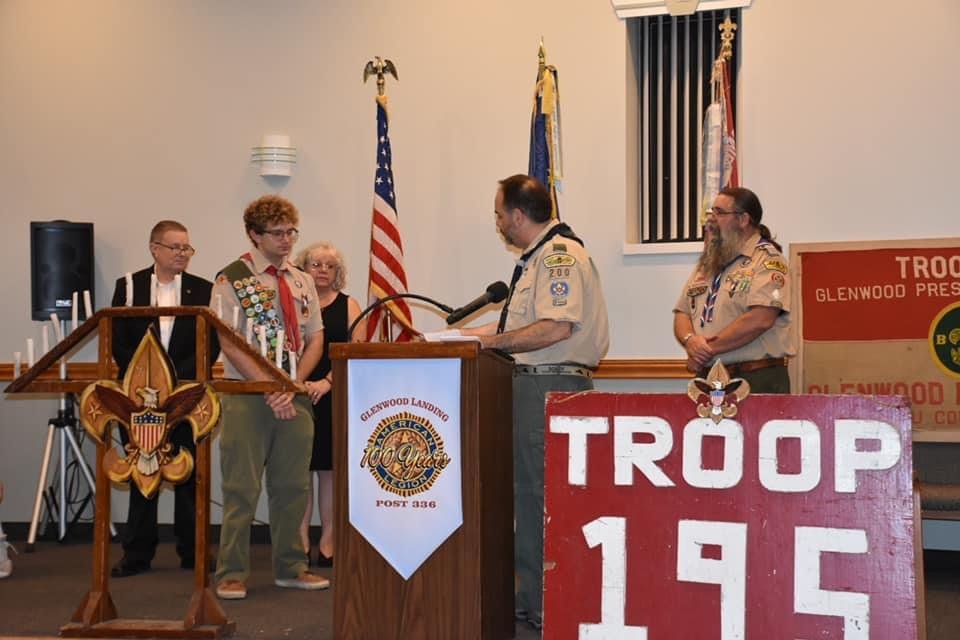 A lot of people in the troop are always pushing the scouts to get [Eagle], but it’s more than the status; it’s the accomplishment of working hard and earning the title. Becoming an Eagle teaches you to be a leader.”
Louis Lavenda, Boy Scout Troop 195
By Annemarie Durkin

Louis Lavenda, of Glen Head, after completing his eagle scout project over a year ago, was finally recognized for attaining scouting’s highest rank. Lavenda was honored at Glen Head-Glenwood Landing Boy Scout Troop 195’s Court of Honor on June 18, 14 months after he fulfilled the last of the Eagle Scout requirements. His award ceremony had to be postponed because of the coronavirus pandemic.

“I feel really accomplished that I made the rank of Eagle,” Lavenda said. “A lot of people in the troop are always pushing the scouts to get [Eagle], but it’s more than the status; it’s the accomplishment of working hard and earning the title. Becoming an Eagle teaches you to be a leader.”

Lavenda, 19, who is preparing for his sophomore year at Worcester Polytechnic Institute in Massachusetts, was a scout for 12 years. He was a member of the Order of the Arrow, scouting’s honor society, and was also Troop 195’s senior patrol leader.

“I believe that the foundation and skills he got through Boy Scouts prepared him to be a strong, independent individual,” Louis’s mother, Kim Lavenda, said. “Only a small percentage of scouts attain Eagle status and stick with it, so I’m extremely proud of him and his accomplishments.”

Since Eagle Scouts were first recognized in 1911, only 4 percent of Scouts have earned the rank.

For his Eagle project, which he completed in the spring of 2020, Lavenda collaborated the North Shore Land Alliance at the Hope Goddard Iselin Preserve, building a sign-in kiosk and new trail markers at the preserve, a hardwood forest with a number of walking trails on Chicken Valley Road in Old Brookville. When he noticed that many of the trail signs had fallen into disrepair, he decided to make new ones, and to create a way to log visitors at the park.

“I’m a civil engineering major in school now, and have been making things since I was around 12, so I wanted to do something where I could create something, and give back to a park and the outdoors,” Lavenda said. “I looked at pictures of the park from the ’90s and early 2000s and nothing has really changed. I wanted to give back to the people of the community and the park itself by making these trail markers.”

He led the younger members of Troop 195 in the construction of the kiosk and trail markers. To fund the project, he used his business Instagram profile (@bitterbladeco) to auction off wood cutting boards, knives and even wearable art he made himself.

Lavenda started as a Cub Scout in Glen Head Pack 278, then advanced to Sea Cliff Troop 43 before transferring to Troop 195. All three troops are members of the Theodore Roosevelt Boy Scout Council. A 2020 graduate of North Shore High School, he was a punter on the football team and a member of the Robotics Team, RoboGym 3950, and helped both teams notch successful seasons and earn a number of awards.

Lavenda is continuing his football career at WPI, despite the challenges of the continuing health crisis. “It was a rough year for these kids — the pandemic kind of took away that so-called college experience for students,” his mother said. “Despite everything going on, I think Louis really excelled in his first year at school.”