Glen Cove woman who lost husband: bill is ‘a step in the right direction’ 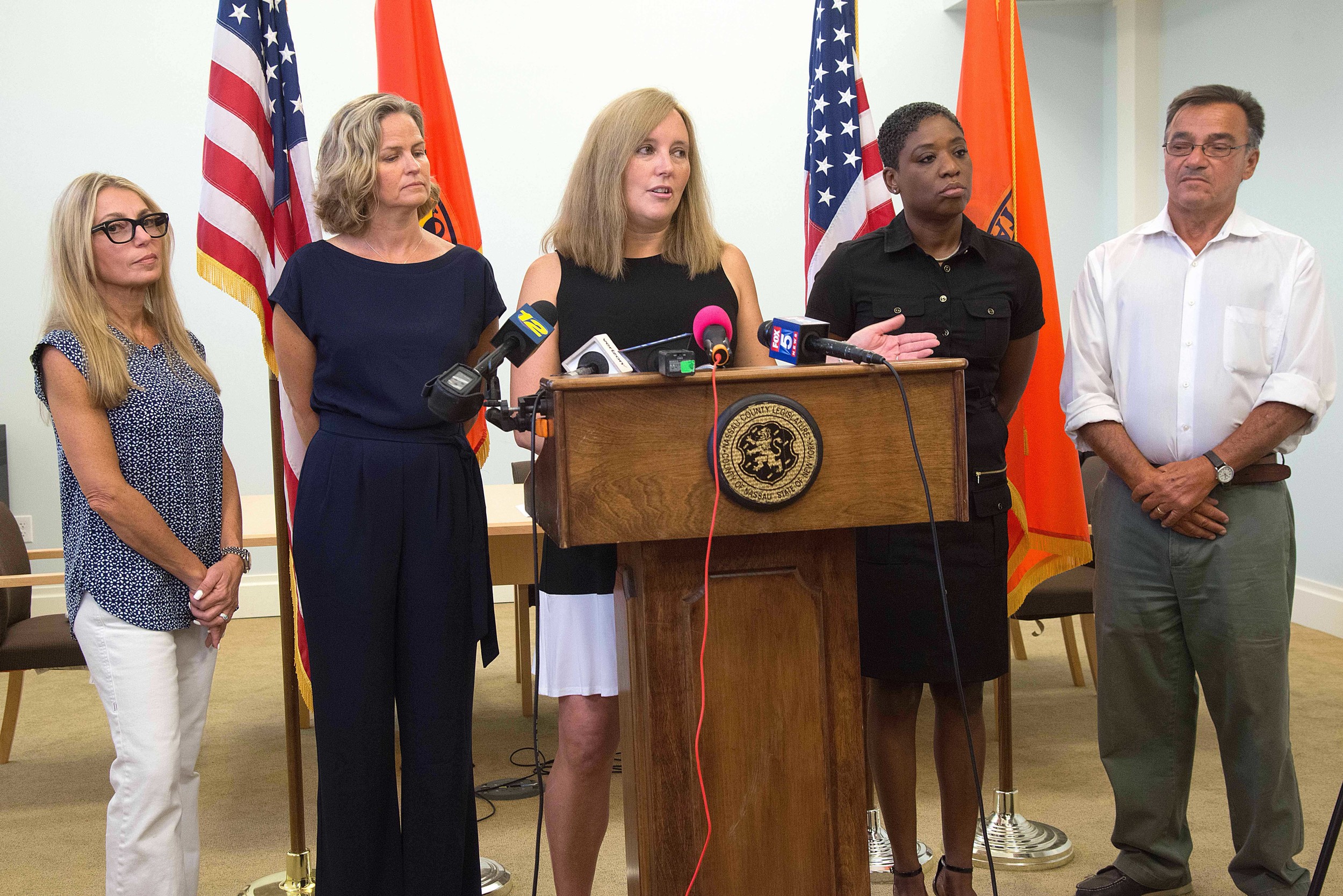 Nassau County Legislator Delia DeRiggi-Whitton, a Democrat from Glen Cove, introduced legislation on Aug. 7 that she and her fellow Democrats hope will help curb prescription opioid addiction and overdoses.

Under the Pharmacy Opioid Notice Law, which is now a bill, all pharmacies in Nassau County would be required to post prominent signs warning of the dangers of opioid addiction, or else face fines.

The signs would read, “Medications containing opioids are addictive and subject to abuse. Use opioids only as directed by your physician. If you or someone you know has a problem with addiction, you can call 1-877-8-HOPENY.”

They would be printed in English, Spanish and Haitian Creole, and would be provided by the county if requested by a pharmacy.

Pharmacies that do not comply with the law would be fined $100 for a first offense, and $500 for subsequent offenses.

“This notice might seem like a small step, but it can have a big impact,” DeRiggi-Whitton said at a news conference. “In just the few moments you stand waiting at the pharmacy counter to pick up a prescription for either yourself, your child or family member, this notice might give you pause and remind you that these prescription drugs need to be taken with care and monitored closely so as not to lead to the tragedy of addiction.”

The legislation must receive majority approval in the County Legislature.

Volunteer EMT and Glen Cove Youth Board member Tony Jiminez agreed with DeRiggi-Whitton. “I believe opioid abuse has reached epidemic proportions here in Nassau, sadly, going from bad to worse,” he said. “We must do everything we can to both educate the public and eliminate the problem, and Legislator Delia DeRiggi-Whitton’s bill is a step forward towards doing that.”

RoseMarie Sherry, of Glen Cove, whose teenage son struggled with opioid addiction at one point, also joined DeRiggi-Whitton in announcing the legislation. “As a mom who was blindsided by the disease of addiction that attacked my family, I can tell you that what I have in common with my fellow Glen Cove moms and fellow Nassau families — that we are not a very unique story,” she said. “We could be any family on Long Island. If we had received more warning of how addictive these medications are, maybe our family’s nightmare could have been prevented.”

“We’re in the midst of a crisis, and we’ve been in the midst of this crisis for many, many years,” said State Assemblyman Charles Lavine, a Democrat from Glen Cove. “The more we can do to educate the public on the dangers, especially of prescribed or so called ethical drugs, the better off we will be.”

This “public health crisis,” DeRiggi-Whitton said, can only be remedied with an “aggressive public health education campaign that educates, cautions and reminds both patients and parents at the very pharmacy counter where they may first encounter the drugs via prescription by their physician.”

Assemblyman Michael Montesano, a Republican from Glen Head, said that while opioid addiction is a big problem, pharmacists shouldn’t be fully responsible for addressing the issue. “I always believe that in all of these circumstances, education is the biggest issue,” Montesano said. “To put this burden on the pharmacist, I don’t think it’s incumbent for them to deal with this.”

Assemblyman Ed Ra, a Republican from Franklin Square, said that he supports DeRiggi-Whitton’s bill. “We’ve seen people get addicted, which leads to more addictive drug use, and I know it’s a part of the problem,” Ra said. “The state has tried to do a number of things to monitor prescriptions, and I don’t think Delia’s bill is a bad idea. It seems like it will be simple enough to just post a sign.”

Claudia Marra, a schoolteacher and mother who lost her husband in 2009 to an overdose of fentanyl that was prescribed to him, said on Aug. 9 that she supported the legislation.

“It’s a step in the right direction, for sure,” Marra, of Glen Cove, said. “Finally legislators are realizing that this is going to get worse if we don’t try and change something, and change it fast.”

The legislation is currently under review.