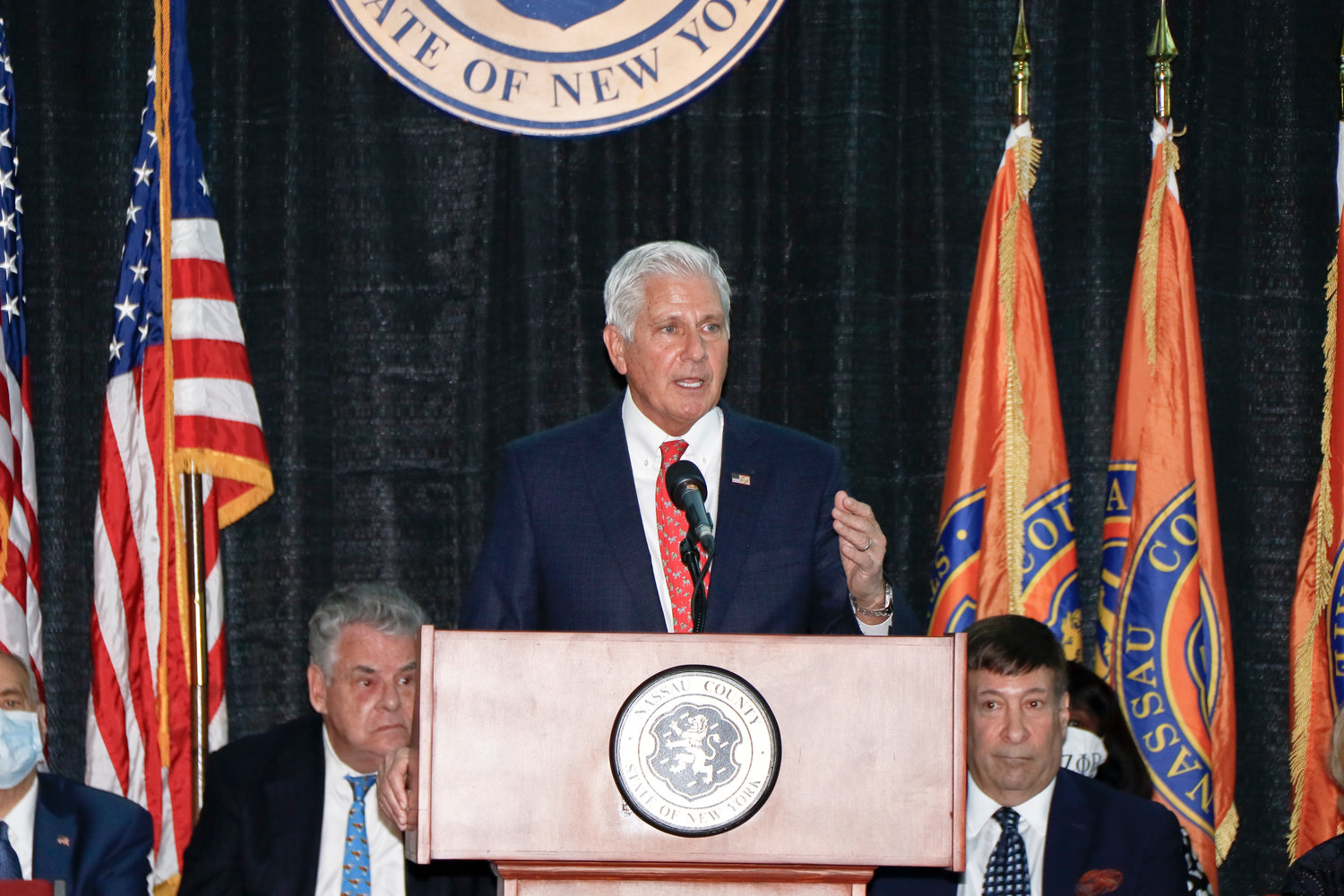 At a news conference on Jan. 6, Nassau County Executive Bruce Blakeman signed an executive order directing school districts to vote this month on whether to require masks in classrooms.
Christina Daly/Herald

I think he’s following his party’s lead in stoking division and creating an enemy to use in riling up his base, putting power before public safety.”
Jon Lauter, Sea Cliff
By Annemarie Durkin

Nassau County Executive Bruce Blakeman signed executive orders on Jan. 6 that directed local boards of education to vote in January on whether their districts should mandate mask use, while also lifting the mask mandate for all county agencies and the state’s temporary mask mandate in public places.

The orders read in part, “Given the historical data on Covid-19 and the ongoing debate over whether masks are more harmful than beneficial to children and to school environments in general, we should protect the freedoms and statutory rights of students and parents by resting with the parents the decision whether their children should wear masks in school.”

According to the orders, school boards must vote “to determine whether or not parents and children should be granted the constitutional right to reject mask mandates while in the classroom.”

Many parents are calling the county executive’s decision to leave masking up to the parents irresponsible, given the county’s recent rising Covid-19 case and hospitalization rates among children with the emergence of the Omicron variant of the coronavirus. Children ages 5 to 11 are now eligible for Covid-19 vaccines, but children under 5 are still not eligible.

“By not requiring masks in schools, it increases the risk of a super-spreader event,” Alisha Riggs, of Sea Cliff said. “It will get more children, more families, and teachers sick. If teachers are out sick with Covid, who’s going to teach the children? It is in the best interest of the county executive to immediately rescind the executive order.”

Deborah Santaiti Lovaglio, also of Sea Cliff, said she knows her son isn’t a fan of wearing a mask, “But if it’s going to protect him and others for now until numbers come down, and until we can get a grip on this virus, then it’s something we all have to do to end this,” she said.

According to the State Department of Health, between Dec. 5 and Jan 1, Covid-19 hospitalizations rose in all age groups, but none faster than those 18 and younger. Hospitalizations for that age group spiked more than 700 percent, while those for all ages combined increased two-fold statewide. Of children newly admitted to hospitals, 91 percent of those ages 5 to 11 were unvaccinated, while just 4 percent were fully vaccinated. Among 12- to 17-year-olds, 65 percent were unvaccinated, and 26 percent were fully vaccinated.

“I think he’s following his party’s lead in stoking division and creating an enemy to use in riling up his base, putting power before public safety,” Jon Lauter, of Sea Cliff, said of Blakeman. “There is no ‘constitutional right’ to reject mask mandates, and last I checked, school boards don’t have the ability to amend the Constitution to grant such a right.”

Other North Shore residents said they were breathing a sigh of relief after Blakeman’s announcement. For months, parents have been crowding school board meetings and advocating at the state level for the removal of Gov. Kathy Hochul’s mask mandate in schools. Many believe the choice to mask school children should be left up to their parents.

“Why the hysteria? Yes Covid was terrible a year ago, [but] thankfully with every mutation, it’s become [weaker],” Rena Rose, from Sea Cliff, said. “So why the panic?”

“Counties do not have the legal authority to require boards of education to vote on specific issues,” the commissioner continued. “School officers take an oath to obey all legal requirements. The State Education Department expects school boards will follow all legal requirements, including the face-covering regulation.”

And a spokeswoman for the State Education Department said on Jan. 6 that local school boards cannot vote to violate either SED or State Health Department policy.

Blakeman’s orders came at a time when Long Island’s Covid-19 test positivity rate was spiking at over 25 percent— the highest in the state — and a growing number of school districts were reporting increased transmission of the disease, with some, such as Long Beach, being forced to close some schools because of staffing shortages. Hospitalization rates were rising as well.

Since Blakeman’s announcement, a number of local and state officials have spoken out against it while the positivity rate, especially in children, continues to climb.

“Blakeman’s refusal to comply with the law mandating that masks be worn in schools gravely endangers children, teachers and our population’s most vulnerable,” Jay Jacobs, Nassau County Democratic chairman, said in a statement released Jan 7. “This politically motivated directive will make school closures more likely, leaving middle and working class families unable to work or require them to pay for child care. School mask mandates must end, but now is certainly not the time.”

The Nassau-Suffolk School Boards Association told Blakeman that it is illegal for him to issue an order that schools can refuse to obey the state mandate requiring masks indoors. Michael J. Kelly, the association’s president, called on Blakeman to cancel his order requiring school board votes.

“New York State Education Law is clear as to who has authority over schools, namely local boards of education, the state education commissioner, the New York State Board of Regents, the governor and the State Legislature,” Kelly wrote in a letter to Blakeman last week. “The laws are designed to prevent regulatory and legislative chaos. Counties have no more authority to direct school board matters than do schools to legislate county affairs.”