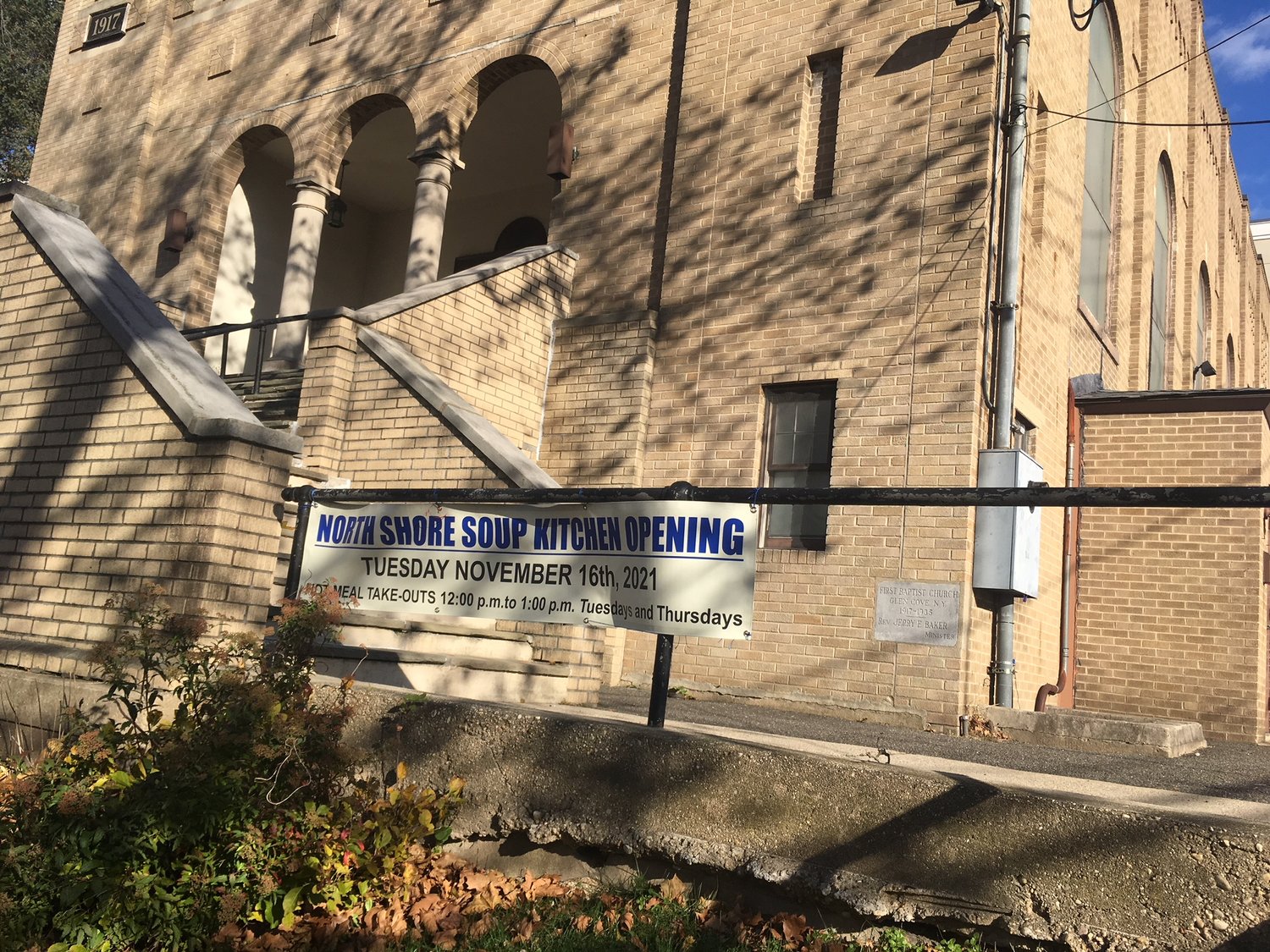 This week, the North Shore Soup Kitchen eturned to its main purpose: serving hot meals to those in need. Closed for more than a year and a half, volunteers and recipients reunited on Tuesday at the First Baptist Church of Glen Cove, where meals will be handed out for take-out twice a week.

“The people who really missed us were at our door,” Estelle Moore, director of the North Shore Soup Kitchen, said, noting that about 40 meals were given out.

The soup kitchen has operated in the basement of the church on Continental Avenue for the past 32 years. Before the pandemic, recipients were served buffet-style and could sit at the tables to eat. For now, recipients must take their meals to go. Moore said the benefit to the dining room — aside from providing a sheltered space to eat — is that it allows people to mingle and network.

“They get to know each other,” she said, “and they know nobody’s judging them.”

The soup kitchen feeds the homeless, as well as anyone looking for a hot meal. Moore stressed that they know most people who come by name — but strictly first name only.

Board member Bernie Rosenblum, of Great Neck, has volunteered at the soup kitchen for 12 years, and agreed that was an important factor.

“Anybody can come get a meal or turkey,” Rosenblum said. “We have no restrictions.”

However, Moore said, if people ask for help in other areas, such as obtaining a Metro card, scheduling a doctor’s appointment or traveling to the social services department, soup kitchen volunteers can assist with making the arrangements.

“They come to us and then we can help them, but we don’t go in and ask questions about them,” she said. “We just try to help any way we can.”

The nonprofit has an account at the pharmacy and is able to cover the cost of medications, when needed, and also has a dedicated social worker available to assist.

“We have a volunteer army,” Rosenblum said, noting that the organization has about 80 volunteers who help with everything from performing administrative duties to serving meals. “We only pay for exterminators, plumbers, electricians and a dishwasher.”

Rosenblum said the soup kitchen’s model is an important one, as compared to food deliveries. “This aspect has withstood the test of time,” he said.

“We are the original,” Moore added. “Then, when the pandemic started, and we had to shut down, we were very happy that NOSH started, and we did everything we could for them.”

Since meals could not be either cooked or served during the pandemic, NOSH started as an arm of the soup kitchen, filling in as a meal delivery service to the meet the community’s needs, which grew as a result of the mandated shutdowns that left many people out of work.

“We were very happy and very supportive, but we now we feel like, hopefully we can come back,” Moore said, adding they are still very careful about the virus, requiring masks and social distancing.

The high vaccination rate in the county — and the fact that most, if not all, of the volunteers are vaccinated — coupled with the low infection rate, made soup kitchen volunteer feel comfortable about opening. “The numbers were down, so it felt safe,” Moore said.

When people come, Rosenblum said, he will ask them to mask up, and will supply a mask to those who do not have one.

“When we open the dining room,” Moore said, “we will require everyone to be vaccinated.”

There’s no timeline yet on when that will be; for now, volunteers said they are just happy to be able to serve people again. Still, Moore, said, with the shelter closed, she worries about the homeless, who come to the soup kitchen for a hot meal and warm place to escape the cold. When the soup kitchen is able to fully reopen, she said, people will again have access to donated clothing, groceries, toiletries and diapers, as well as a hot meal.

Earlier this month, Rabbi Irwin Huberman, of Congregation Tifereth Israel, presented a $3,500 check to Moore on behalf of his congregation.

“While thoughts, prayers and introspection play a critical role during the High Holidays,” Huberman said, “Jewish tradition teaches that is even more important that we support our good intentions with action.”

Currently, the soup kitchen is open on Tuesdays and Thursdays from noon to 1 p.m. With Thanksgiving coming up next week, the kitchen is also providing a limited number of turkeys for those who want one, with tickets being handed out this week. It will be closed on Thanksgiving day, though meals will be served at St. Patrick’s Church cafeteria from 11 a.m. to 3 p.m. Donations can be made by sending checks or gift cards to the North Shore Soup Kitchen, P.O. Box 168, Glen Cove, N.Y. 11542