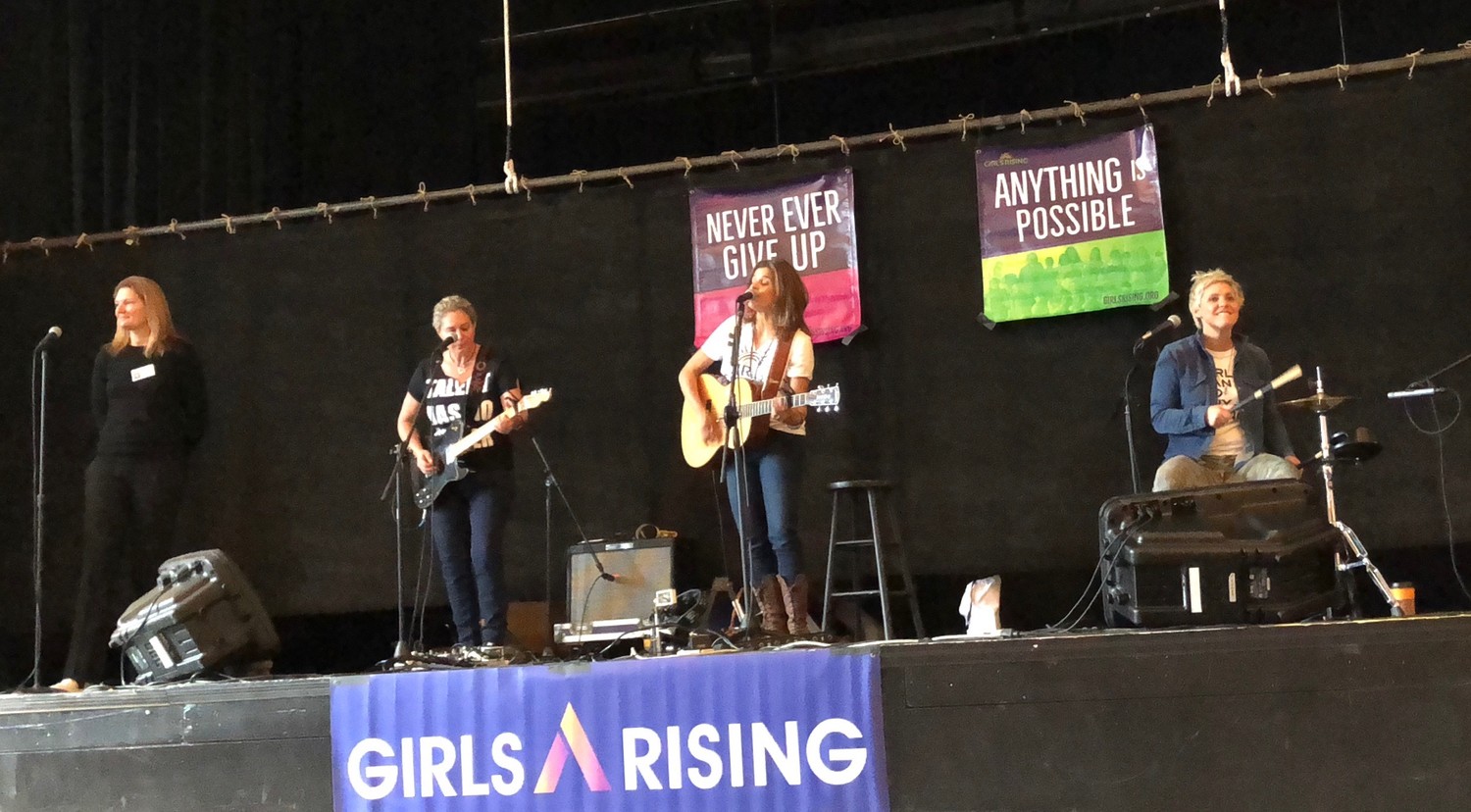 Finley Middle School’s eighth grade students got a lesson in “being one’s true self” on Friday, March 16, when the band, Antigone Rising, visited their school as a part of its Girls Rising outreach program. Along with WMBA Hall of Fame basketball player Sue Wicks, three of the band’s members, Nini Camps, Kristen Ellis-Henderson, and Cathy Henderson, led the students in discussions about gender equality, empowerment, and following one’s heart, all messages the women are passionate about sharing with young people.

“Girls Rising’s message was clear to our students,” said Finley Middle School Assistant Principal Lawrence Carroll, “Be authentic. I believe the students learned that women can excel in any industry and to inspire everyone to think differently.”

Antigone Rising began their Girls Rising outreach program in 2012, as a way to “share stories about our experience as women in a male-dominated industry,” said Nini Camps. “This program is for boys and girls and we aim to demystify stereotypes. We advocate for gender equality,” Camps added, “and in order to achieve equality, boys and girls need to be a part of the conversation.”

The program included performances by Antigone Rising, which played songs that related to the messages shared in the program. “We played our song Game Changer . . . which is all about raising your voice and standing up,” Camps explained. “Music is a way for us to get our message across to the students in a fun, engaging way and it stimulates the kids outside of the classroom, too,” remarked Kristen Ellis-Henderson.

During the program, students engaged in a public forum of sorts, something Finley Middle School teacher Meredith Murolo thought “impacted the students greatly. It allowed them to think about embracing differences and coming together as a community that is accepting and kind.”

The students helped shape the program and suggested the topics to be discussed by taking a survey ahead of time. This focused the conversation and ensured that it was specifically relevant to Finley Middle School’s students.

Most of all, the eighth graders at Finely wanted to talk about bullying. “A lot of bullying comes from insecurity and not being one’s true self,” said Camps, who mentioned that many of Antigone Rising’s songs touch upon this idea. While engaging in this conversation, Ellis-Henderson noted that she and Camps shared their own experiences of isolation growing up, “which really resonated with the kids.” Ellis-Henderson believed their “visit gives the kids a chance to think about how gender issues affect everyone. We talked a lot about team work and togetherness,” something essential to overcoming gender stereotypes and encouraging equality for all.

The Girls Rising program ended with a question and answer session, what Camps and Ellis-Henderson cite as the best part of the day. “We know we’ve made a difference when we get to the question section and every single student has their hand raised,” expressed Camps. The students asked a variety of questions, and at the end, “they raced up to the stage and told us how meaningful the program was,” Camps commented. Ellis-Henderson was in awe when “one girl told me I was an inspiration for her. That’s exactly why we created the Girls Rising program.”

Camps and Ellis-Henderson agree that the most powerful indicator of their Girls Rising program impacting the students are their spirited reactions, like one they received from eighth grader Max Lasser, who attended the program. “I couldn’t have enjoyed it more,” he said. “I was reminded that talent has no gender. Men and woman should all have the same opportunities to succeed.”

Teacher Meredith Murolo viewed Antigone Rising’s Girls Rising program as beneficial. “It is inspiring to all students, both boys and girls,” she said. “In fact, I hope they will return to our school to do more. It is a wonderful opportunity for all.”

Oh no! It is a tornado alert!