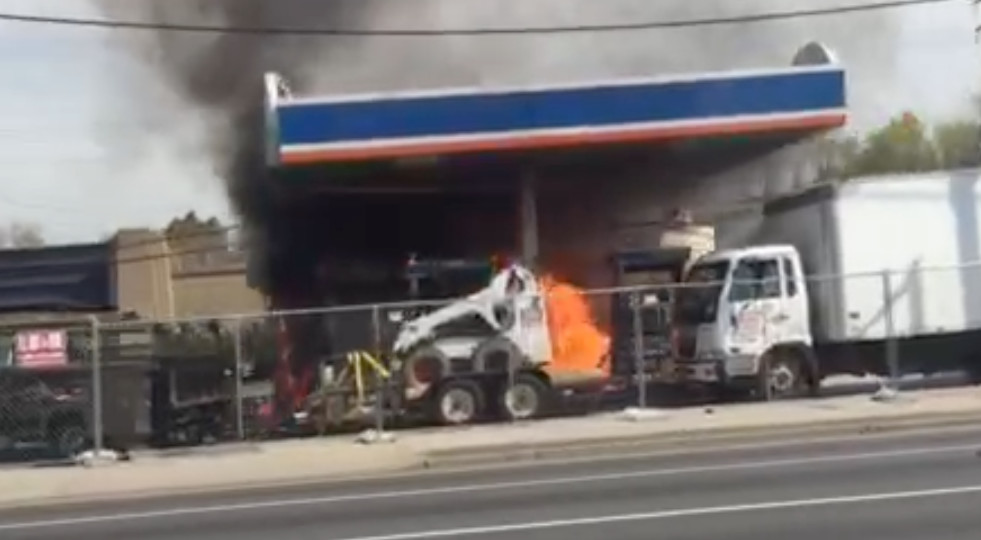 A fire was raging in Freeport at this gas station on Tuesday morning, May 5.
Michael Bologna/Herald
Gulf gas station
190 Sunrise Highway
Freeport, NY 11520

See the VIDEO of this fire at the Gulf gas station on Sunrise Highway in Freeport.

This Gulf gas station had been closed and was in the process of being demolished when fire erupted Tuesday morning at about 10 a.m., May 5.

According to detectives, workers from AARCO Environmental  of Lindenhurst and Service Station Installation of Bayshore were performing work at the Gulf Gas Station, 190 W. Sunrise Highway when fumes from the fuel tanks being removed were accidentally ignited. The three male workers, two of whom were 35 and the third 19, suffered serious burns and were transported to an area hospital. The fire has been deemed accidental at this time.

The gas station is at the corner of Sunrise Highway and Long Beach Road.

"At 10:01 a.m. passing motorists stopped at the quarters of Hose Co. 4 to
report a fire at the intersection of W. Sunrise Hwy & N. Long Beach Ave.
Hose Co. 4 responded immediately and upon arrival notified Nassau County
Fire Communications that they had a working fire at the gas station.

"Numerous Freeport Fire Department units operated at the scene where they
fought a fire involving multiple vehicles and gasoline at the Gulf Station
that was closed for business and under construction. Firefighting Foam was
used to douse the flames that were brought under control within a half hour.
Freeport was assisted by the Baldwin, Oceanside and Merrick Fire
Departments, along with Bellmore-Merrick Volunteer Ambulance Corp.

"Three workers were transported to NUMC Burn Center and one Firefighter was
transported suffering from dehydration.

A witness told the Herald there was an explosion, which knocked him down.