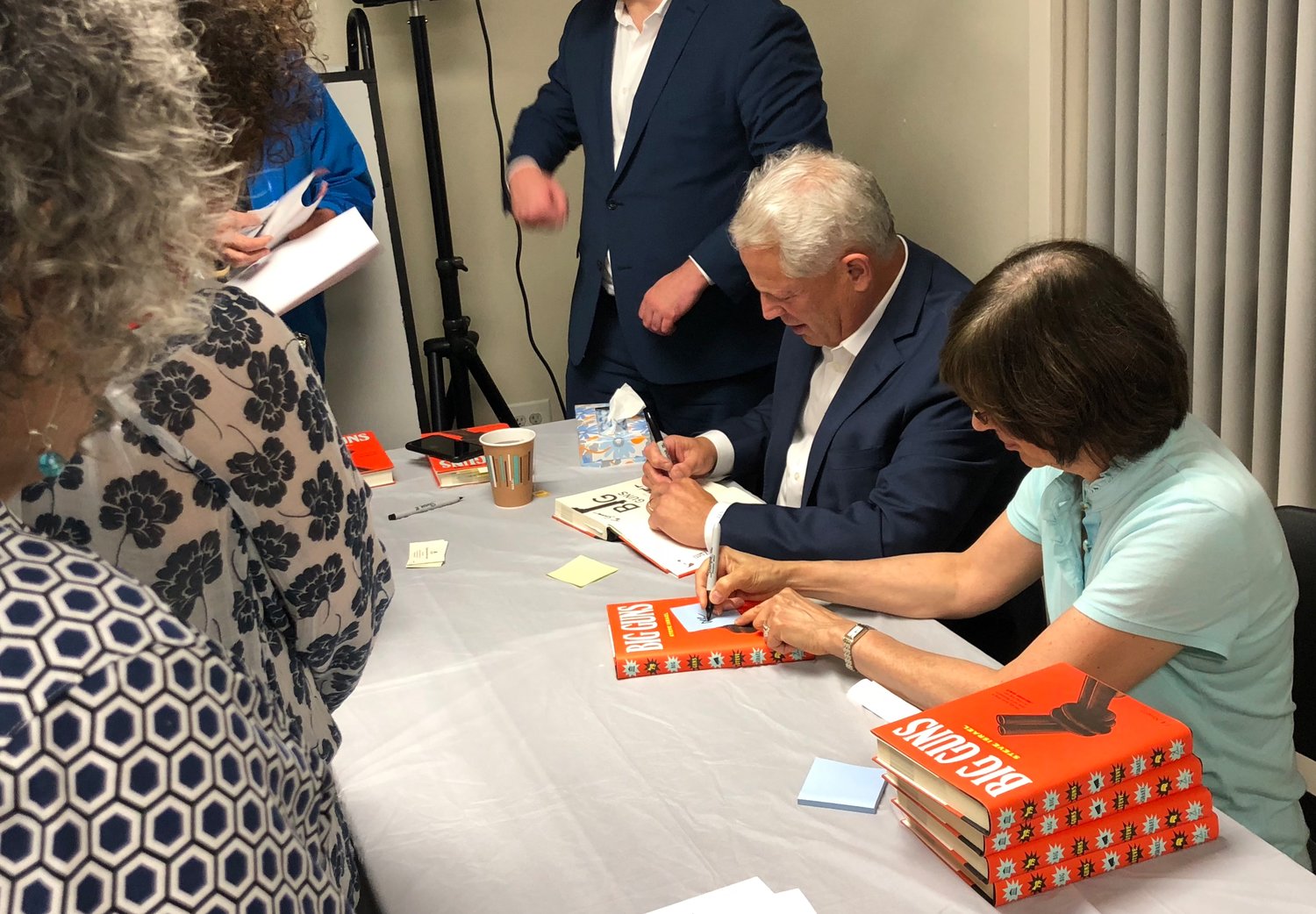 The Gold Coast Library was visited by former congressman Steve Israel, seated, who gave a lecture on his new book, answered questions from readers and signed copies.
Joe Pantaleo/Herald Gazette
By Joe Pantaleo

As an eight-term U.S. Representative, Steve Israel has logged countless hours at town halls across Long Island. The former congressman, who served New York’s 3rd Congressional district from 2001 to 2017, found himself in a similar position last Thursday, except instead of answering questions about local politics, he spoke to an audience about his latest book, “Big Guns.”

Israel, of Oyster Bay Cove, visited the Gold Coast Library to talk to readers about a multitude of topics, ranging from his take on the current political climate to the origin of jokes that appear in his second novel. A satirical story about gun legislation in America, Israel’s fictitious account uses humor to spark a serious conversation.

“I’ve always liked to poke fun at the system,” he told the crowd of 40 people, adding that “good satire must always have at least a kernel of truth.”

“Big Guns” tells the story of Asobogue, a fictional town located on Long Island’s North Fork in Suffolk County. After the town’s mayor clashes with a major firearm lobbyist, Asobogue finds itself in the middle of a national controversy centered on gun legislation.

Michael Canders, Israel’s friend, said that there is a strong presence of Long Island in the novel. “There’s a lot of references to things that are very familiar on Long Island,” he said.

Israel was inspired to write the story after he stumbled on a New York Times article written shortly after the 2016 Sandy Hook shooting. The article was about a small town in Georgia that required residents to own and carry a firearm at all times. A similar law is proposed in the book.

Although the story is a satire, Israel admitted that a lot of the quotes in the book were based on real things he had heard during his time in Congress. “I would see things, and note them, and I can’t tell you how many times a fellow member would come up and ask, ‘Are you writing about me?’”

The rights to Israel’s novel were recently bought, and a screenplay is currently in the works. The movie is expected to begin production within the next two years.

After the event, Israel signed up to become a Gold Coast patron. He attends most library events that come across his desk. “Libraries keep our country together, and they keep our country informed,” he said. “I worry that in a modern age people will forget about the importance of libraries.”

Library Director Mike Morea said Gold Coast typically hosts one author visit per month. “We make sure that the library has the books for people to buy, and we’ll also encourage book discussions,” he said.

The library is expected to host two more author meetups this fall with Carola Lovering and Kate Greathead. The events are coordinated by librarian Ida Weiss, who reaches out to debut authors that are interested in promoting their new books.

Weiss believes the author meet-ups are important since they give the community an opportunity to hear new voices they wouldn’t normally be exposed to. She reached out to Israel because she felt “Big Guns” had a lot to offer. “It was a great, funny, and important novel,” Weiss said. “Even though it’s humorous, it highlights a lot of serious issues.”