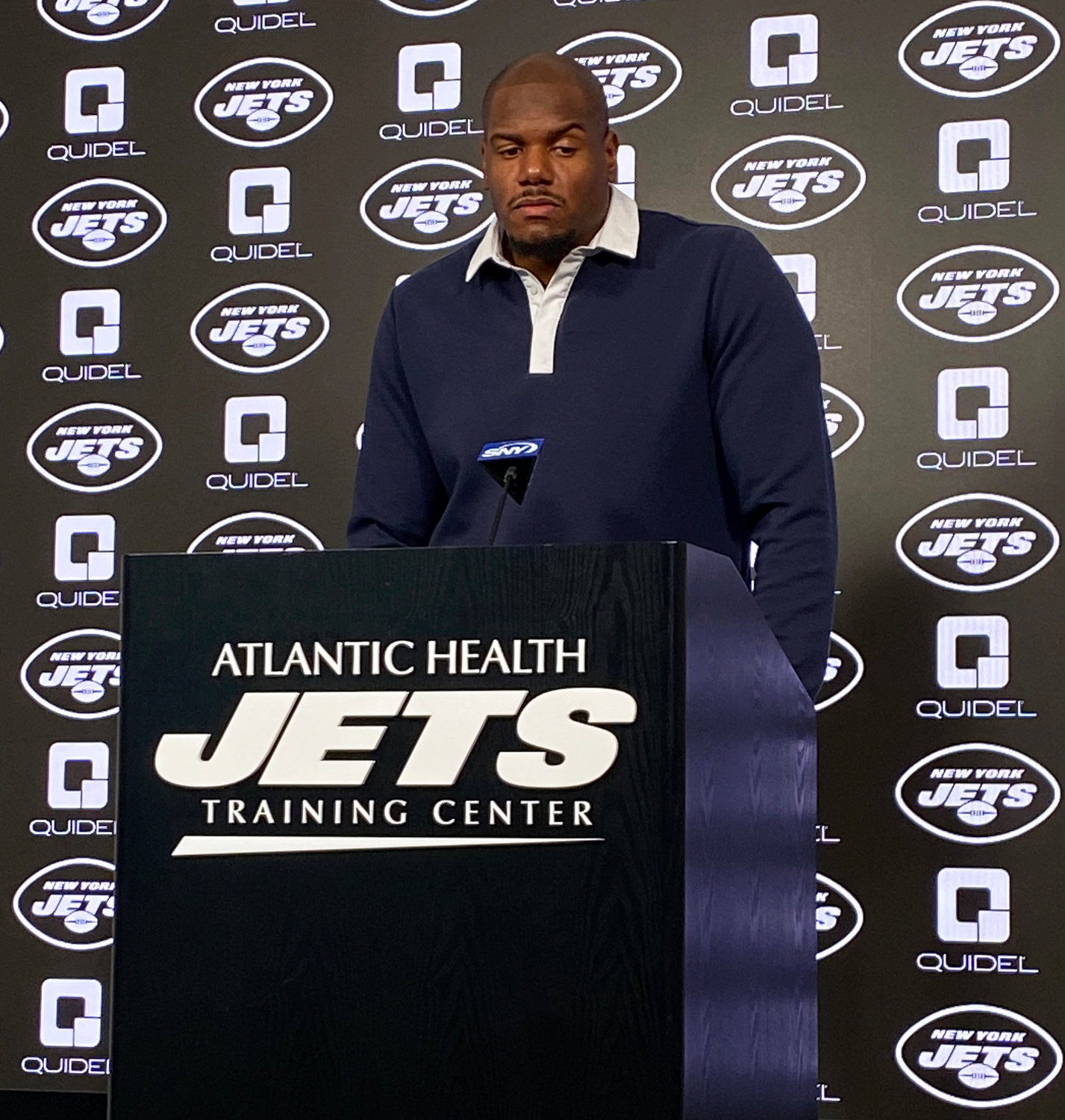 From Freeport High School to the University of Virginia and the National Football League, D’Brickashaw Ferguson can add 'New York Jets Ring of Honor' to his impressive resume.

Ferguson, a 2001 Freeport graduate who helped the Red Devils to Nassau County and Long Island championships as a junior two-way star, had his No. 60 honored by the Jets during halftime of Sunday’s game against New England at MetLife Stadium.

“This is a very surreal moment,” said Ferguson, a three-time Pro Bowler who had his No. 66 retired by the University of Virginia where he started 49 straight games and was named All-American in 2005. “Coming into the game, you have no idea how it’s going to end,” he added. “I don’t think this honor has really hit me yet.”

The fourth-overall pick of the 2006 NFL Draft, the 6-foot-6, 310-pound Ferguson played 160 consecutive regular-season contests and never missed a game in his career, including an incredible 10,707 out of 10,708 offensive snaps.

“His performance and production at left tackle was the absolute best he could be,” Jets Director of Player Development Dave Szott said. “He fulfilled his potential to the maximum. There’s nothing that Brick didn’t do to his upmost ability, and there’s no box you can check in his career and personality that wasn’t an A-plus.”

“D’Brickashaw has exceeded each of these expectations during his career and will be remembered as one of the finest players in Jets history.”

Born with a heart murmur, Ferguson said he underwent successful open-heart surgery to correct the defect when he was 8 years old. That not only didn’t stop him from getting on a football field, but motivated him even more.

Upon his retirement at age 32, he said: “This all started because a young boy, who happen to have open-heart surgery, definitely wanted to prove his toughness not only to himself but to everybody by playing football.”

Ferguson didn’t begin playing organized football until he was a student at Freeport Middle School. When he reached high school, he was “tall and lanky,” Freeport head coach Russ Cellan said. “Brick had an 87-inch wingspan and I could tell right away he was special, not just as a football player but as a person.”

Ferguson was a three-year varsity starter at offensive tackle and defensive end, and also one of Freeport’s captains. In 2001 he won the Thorp Award, given to Nassau County’s most outstanding player, as well as the Martone Award as the county’s best lineman.

“He was a tremendous student-athlete — the total package,” Cellan said.

Ferguson recalled a magical 2000 when the Red Devils capped a perfect season with a 20-19 overtime victory over Commack for their first-ever Long Island title.

“I remember Eddie Gordon sacking their quarterback [Mike Prahalis] on the last play,” Ferguson said of Commack’s failed two-point conversion attempt. “Freeport was always a great environment,” he added. “My teammates and coaches were phenomenal.”