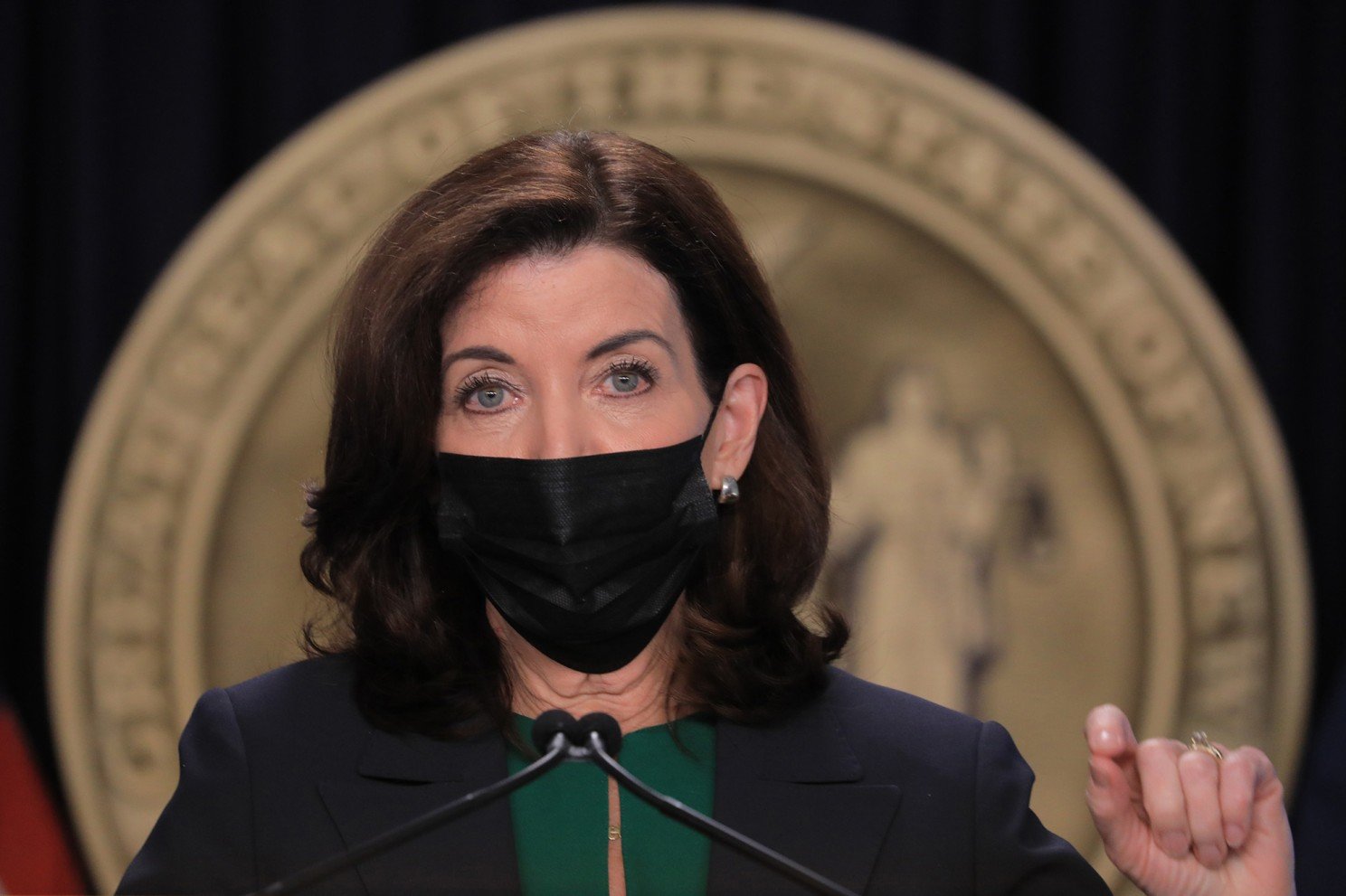 New York State Gov. Kathy Hochul included a plan in her Jan. 5 State of the State Address that could eliminate single-family zoning laws and mandate that municipalities allow a minimum of one accessory dwelling unit on owner-occupied lots in residential zones.
Courtesy NYS Pressroom

The last time something like this happened was when Robert Moses was still running the show in the 1940s and ’50s, when he just bulldozered over local government and made decisions like this.”
Paul Graziano, Land use advocate

Will there be an end to the residential landscape that people in New York take for granted? Gov. Kathy Hochul included a plan in her Jan. 5 State of the State Address that could eliminate single-family zoning laws and mandate that municipalities allow a minimum of one accessory dwelling unit on owner-occupied lots in residential zones. Put more simply, apartments would be encouraged, and local governments would not have the power to stop them.

“Although it’s not happening now, I’m sure it will be resurrected,” Serota said. “It doesn’t belong in the budget.”

U.S. Rep. Tom Suozzi, who is running for governor, held a virtual news conference on Jan. 27 at which he criticized Hochul’s plan, supported by several mayors, civic leaders and town supervisors from Nassau, Suffolk, Westchester and Queens.

“The end of single housing in New York state — that sounds like a pretty dramatic change,” Suozzi said. “I don’t believe in taking away the zoning control for local government and I don’t believe in eliminating home rule. And I don’ believe the governor of New York or the State Senate and Assembly should impose their will upon local government. I will fight against this.”

Assemblyman Michael Montesano, a Republican from Glen Head, said on Thursday that he would not vote for such a measure. The elimination of single-family zoning laws would be an example, Montesano said, of an unpopular bill being included in something that people want to vote for — in this case, in the budget.

“This is all coming together now, and mayors are contacting me,” he said. “It’s going to be a big issue, and is just catching fire now.”

The reason such a change is needed, proponents like Hochul say, is the shortage of affordable housing. But Suozzi said that the elimination of single-family zoning laws isn’t necessary, because there are efforts now in the state to create more affordable housing, which he supports. A resident of Glen Cove, he said he has been fighting for affordable housing for his entire career, including when he was mayor of Glen Cove, from 1994 to 2001, and Nassau county executive, from 2002 to 2009.

When he was mayor, Suozzi said, there was more two-family housing and affordable housing in Glen Cove than anywhere else on Long Island, and he added that he is very familiar with the need for affordable housing.

“We have to work on it, and on segregated neighborhoods,” he said. “But to take the power of local government away is not the way to do it.”

“We are responsible for our communities and know what the impact will be,” Schilliro said. “What worries me is that there is money in the budget this year, which there wasn’t last year. This could change our lives.”

The Nassau County Village Officials Association represents 64 villages and some 475,000 residents. Serota said he couldn’t imagine any villages supporting Hochul’s plan. “This is a separate issue, and doesn’t belong in the budget, and it’s completely insane,” he said. “It’s not one-size-fits-all. You need vetting and discussion.”

Hochul has said that ending single-family zoning will create the option of multi-generational housing. But land use advocate Paul Graziano, of Queens, said that so-called mother/daughter units are already legal in Nassau County.

“There is nothing affordable about ADUs,” Graziano said, referring to accessory dwelling units. “This is about increasing housing supply. It has more to do with unleashing chaos in communities that don’t have the infrastructure to deal with this, not to mention increasing land use value and housing prices.”

Hochul’s plan would dramatically change the character of Upper Brookville, Mayor Elliot Conway said. “Upper Brookville has been shaped by a 90-year history of zoning,” he said. “Doubling the density will tax the infrastructure that’s already in need of renewal. Think about it. [More] police protection, more traffic, so roads will wear out quicker, more solid waste disposal and garbage — we already have an issue on landfills. And the possible pollution of our aquifers, which is 100 percent of the source of our clean water for drinking. All that means higher taxes.”

Graziano said that Hochul’s idea was an existential threat to a huge percentage of the state’s population. “The last time something like this happened was when Robert Moses was still running the show in the 1940s and ’50s,” Graziano said, “when he just bulldozered over local government and made decisions like this.”