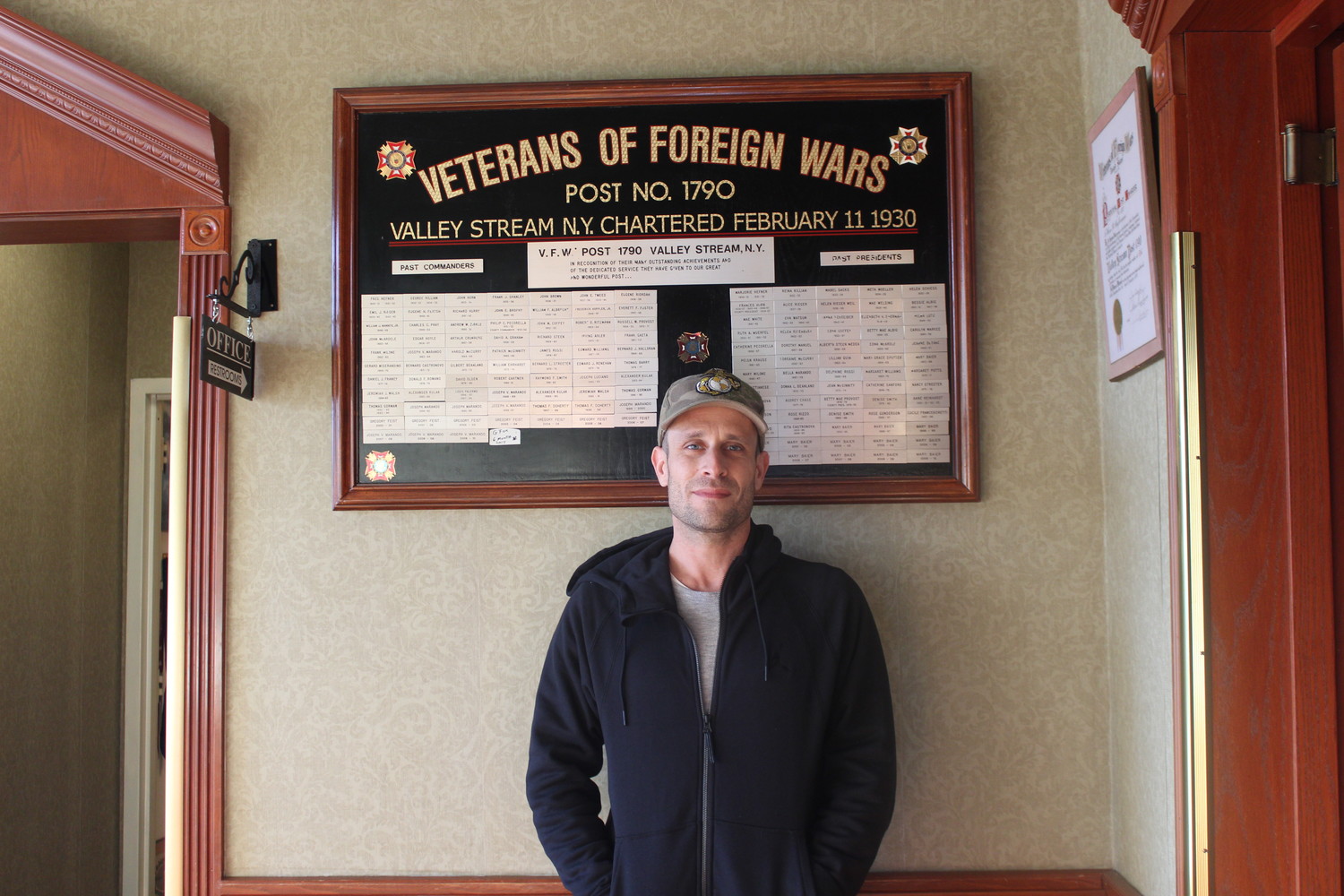 Peter Yarmel took over as commander of Veterans of Foreign Wars Post No. 1790 in November.
Melissa Koenig/Herald 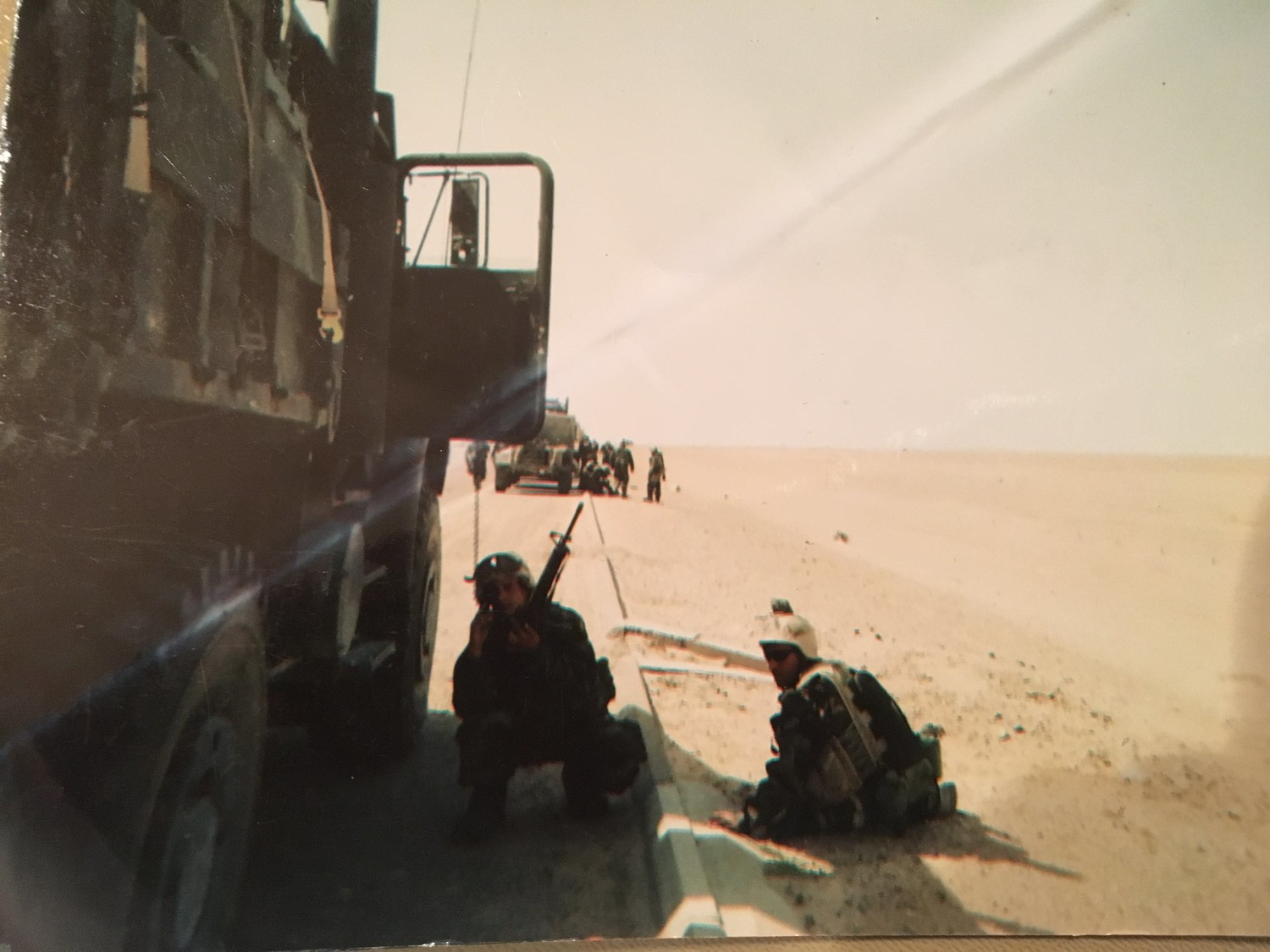 Peter Yarmel, left, served as a field radio operator in Iraq in 2003 with his friend Doc Washburn.
Courtesy Peter Yarmel
Previous Next
By Melissa Koenig

Since he returned from his second tour in Iraq, Peter Yarmel has helped renovate the basement, add new sheetrock and fix the plumbing of Veterans of Foreign Wars Post No. 1790’s building, at 65 East Merrick Road in Valley Stream. Now, he serves as the commander of the post he helped restore.

Yarmel, a 39-year-old Valley Stream native who currently lives in Lynbrook, also served on the post’s bartending and cleanup committees, according to Al Goldberg, a Vietnam veteran. “He’s a hard worker, cares deeply for the post and put in a lot of time,” Goldberg said.

Risking his life in Iraq

Yarmel served in the Marine Corps for two tours in Iraq, both of which lasted seven months.

His first tour was from January 2003 to July 2003. During that time, he served as a radio field operator for a shock trauma platoon. Yarmel radioed for Medivacs to get injured soldiers off the battlefield and transport them to a hospital.

“We were right there in the battlefield,” Yarmel said. “We went and got ’em, surgeons did what they had to real quick and patched them up, and sent them back to the real hospitals.”

Yarmel then returned home to Valley Stream, where his childhood friend Michael Fox’s father, George, a Vietnam veteran, encouraged him to join the VFW. “He’s a veteran and he’s a friend of my son’s, and we needed younger blood,” Fox said.

That first year, however, Yarmel said, he was not involved in the VFW. He was sent to Iraq to serve another tour in the city of Fallujah, where he drove a Hummer filled with guns for a counterintelligence team.

“My captain was from Kentucky, and he was only up in New York once, and he heard my accent and he’s like, ‘Oh you’re from New York,’ you’re driving,” Yarmel recalled. “So that’s how I wound up driving Humvees with machine guns on them.”

He said that he made friends during his time overseas. “Besides all the gunfire, it was pretty cool, because the camaraderie with my Marines was fantastic,” Yarmel said.

Those friendships, he said, led him to become more active in the VFW after his second tour. “I guess I just wanted to still be a part of the military family without being in the military,” he said.

Goals for the future

“We have tons of Vietnam-era, Korean [War vets], we’re getting a little low on the World War II vets but they’re all in their 90s at this point,” Yarmel said. “But as far as the younger vets, I don’t know if times have changed.” He said he thinks that younger veterans may not feel a need to connect with older veterans due to social media. “You can just check on your phone and hang out with your buddies whenever you want,” he said.

But Yarmel said that younger veterans should join a VFW because it helps them with their veterans’ benefits. The VFW steered him to the Northport Veterans Affairs’ hospital to collect a disability benefit, showed him how to return to Nassau Community College on the G.I. Bill and got him an apprenticeship at the Local 731 working on the Marine Parkway-Gil Hodges Memorial Bridge in Brooklyn through the Helmets to Hardhats program. He is now also applying for the guaranteed Veterans Affairs home loan. Yarmel said that he received all of the benefits from the VFW.

“This is all because of members who pushed me to do it,” he said.

He also enjoys being involved in the Valley Stream community. The VFW has its own softball team, and is involved in village street fairs and the Memorial Day and Veterans’ Day ceremonies.

Mayor Ed Fare said that he looked forward to working with Yarmel on the village’s ceremonies, and added in a statement that it’s “nice to see a young veteran born and raised in Valley Stream take command of such a historical post.”