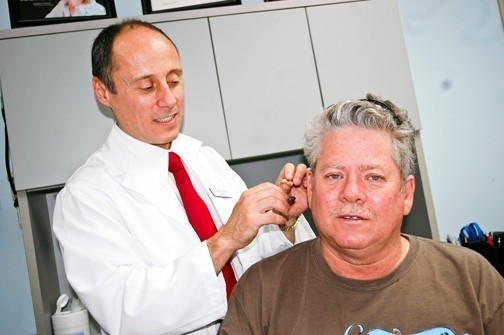 Dr. Larry Cardano checked on the hearing aid that he provided to William Ryan through the Valley Stream Lions Club’s Lend an Ear program.
Andrew Hackmack/Herald
By Andrew Hackmack

Hearing loss has been an issue for Valley Stream resident William Ryan for many years. It’s a problem that has often led to frustration, but one that has been solved thanks to the Valley Stream Lions Club.

The Lend an Ear program got its start in Valley Stream in the early 2000s, when the local Lions launched the initiative. It has since expanded across Long Island. Hearing aids are provided at no cost to people who have suffered hearing loss and are unable to pay for the expensive devices.

Ryan, 59, met Dr. Larry Cardano, an audiologist from the Hearing Center of Long Island, on Rockaway Avenue, at Franklin Hospital’s health fair in 2013, where the Lions Club was promoting Lend an Ear. Cardano, who helped start the program, recently outfitted Ryan with a pair of hearing aids.

It’s a decision that Ryan is glad he made, after some prodding from his wife, who also has hearing aids. “She kept pushing me to get it, but we were under a lot of stress,” he said. “Finally, I came to my senses.”

Ryan and his wife have been staying in Valley Stream since their home in Inwood was damaged extensively by Hurricane Sandy. The house has to be demolished, he said, a situation that put the search for hearing aids on the back burner.

Genetics have played a role in Ryan’s hearing loss, but the problem was exacerbated when he worked in a noisy warehouse. If he was in a situation where a number of people were talking, the sounds jumbled together and he couldn’t understand anything.

Talking louder is a natural consequence for someone with hearing loss, and Ryan said he would do it unintentionally. This would often irritate others, especially those on the other end of phone conversations.

“They get mad,” he said. “They hang up on you, and it’s all because you can’t hear. I’ve been through a lifetime of it.”

He had tried hearing aids once before that he saw advertised on television, but they just amplified all sounds instead of helping his specific hearing issues.

Cardano said it is common for people with hearing loss to withdraw from social situations out of frustration. He also said there are studies that show that untreated hearing loss can have a negative impact on someone’s income.

Cardano, who has been an audiologist since 1989, opened his practice in Valley Stream in 1996. He joined the Lions Club two years later, and suggested the initiative.